uild 233 is up and running! Servers should now be updated. This is a bug-fixing, performance and stability patch, with some big improvements to Spark tools! 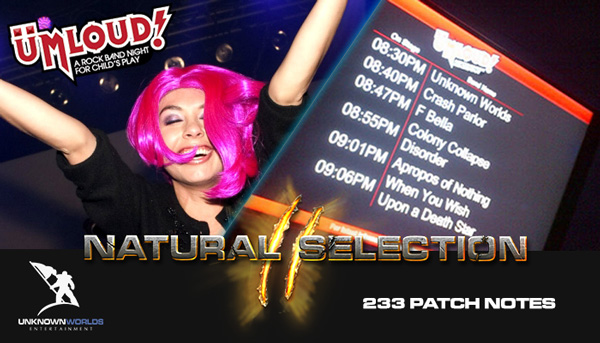 When you run, clamber or fly through the corridors of Tram or the tunnels of Mineshaft, you could be forgiven for taking the experience for granted. Your avatar is free of your physical self, your experience separate from the real world around your PC. Yours is a playground in which your physical limitations are irrelevant.

That irrelevancy allows Child's Play to improve the lives of countless children. When in a hospital, or other physically limiting situation, children benefit greatly from engaging with games. They are a distraction, a challenge, a stimulation, a social experience and a source of great fun.

When Charlie and Max first founded Unknown Worlds, they measured everything in burritos. How many burritos will that new PC cost? Can we afford a new Windows license, or even office space with an actual window? The development of Natural Selection 2 was always tight, dollar signs casting a long shadow over every decision.

Therefore, it is with the most immense pride that Unknown Worlds was a premier sponsor of Umloud, a Rock Band themed charity event in San Francisco, hosted by Tim Shafer held on the 6th December. All the proceeds from Umloud went to Child's Play.

No one in the office dared dream that one day UWE would be in a position to give back to the gaming community in such a meaningful way.

It was a blast, for a great cause on stage performing - Steve on vocals, Charlie on guitar, Brian (The Chops version) on drums and Hugh on bass.

Warning! Be careful with the new Spark Editor 'Vertex Weld' tool. Save your work before using it. As it is a new implementation, there may be stability / file integrity issues with it.

I was going to make a joke about selling M rated games to children and then I realized I didn't know what NS2's rating is and can't seem to find it anywhere. Another lovely thing about online only distribution I guess. Although in the case of this game it doesn't seem like a rating would hurt that much since I don't think you intended to sell it in physical stores.

I think it also depends on how hospitals and the like define 'children'.