Today's plan is to just bring some more C&C a$$ kicking to the house. More screens, another 4 songs... and, huh, we haven't even started yet...

Merry Christmas everyone,
Yet again is the time to look and see what leaps have been made this far.
Though, today's plan is to just bring some more C&C a$$ kicking to the house.
Namely, more screens you've surely been waiting for and another 4 songs... and, huh, we haven't even started yet.

Presenting you the official C&C Renovatio logo we'll be adopting for use from now and further on:


Now, this is the latest version, but, if you've re following us for any reasonable time, you know we rarely stop at where it "seems to have ended".

Wouldn't you know - it's actually recycled from a an old cruiser.

There's also a picture of the two variants of T-80. The not-so-damaged one will be used in some scenarios and wherever rarely possible as the original predecessor to the Scavengers main tank. 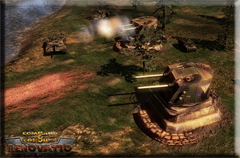 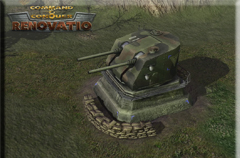 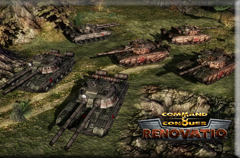 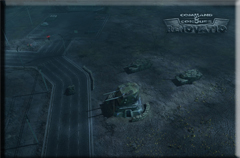 Another surprise for ya'.
It's shiny. It's fancy. Russian women love it. What is it? 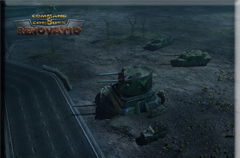 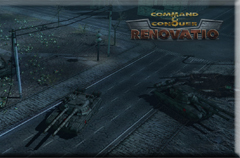 They look small.
But, much bigger and better than that is the planned game resource system.
Details will be explained later. For now, you can take all ore that you want. We're generous today.

Another 4 songs... and we're just in the middle of it.

The Mod of the Year awards are 'round the corner. This is a good way to reach the hands, that are just above the balls for the task.
The potential addition to the team might serve just right to get the game done even faster. 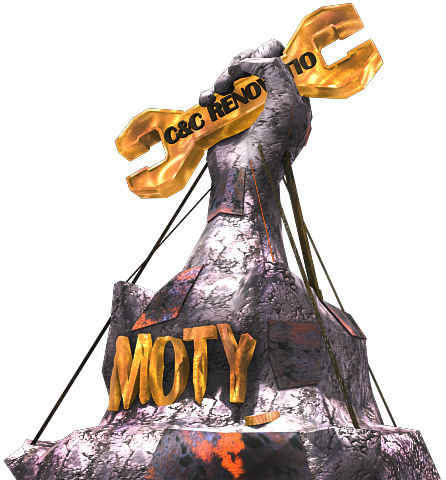 Or wait...
Read through these job positions and maybe there's a spot you feel like doing with your eyes closed.

Sound Technician: create gun shot sounds, record voice; work closely with the music department, since that is where it all starts and ends.

Mappers: take the plan we gave to ya' and create a mind-blowing map, often from a given location reference through Google Earth or similar.

Interesting pattern can be seen here - we need more good sausage cu... I mean artists.
You may apply using PMs here or at the recruitment barracks using the form or... not using the form. To be or not to b... ah, enough drinks for today.

You haven't uploaded pics of textured base defenses on Moddb! =(

The issue has been resolved.

Great stuff especially the turret. The atmosphere of the night mission (or whatever) is great.

that turret is so f*cking sick!!! I love it!

Stunning pics! Keep it up!

Nice to see you people get night missions right. Something EA has failed to do since Generals.

You haven't played RA3, have you? There's a mission by night.

German missions in TW are night missions too :P

IMO the best night map they've made was "All that glitter" in KW. The one where you infiltrate the GDI treasury with specters, shadows and stanks.

Yeah, these missions were night ones, too.

great music! could we get a download? I want it in my playlist :)

There's two sides to this, we know.
We also know that we get better sleep and thus better health, when all the work is safe under the pillow.
It's not an option until this this is actually released in a mod package.

Your interest is always appreciated.

A few things to clarify...

Firstly, for us to correctly evaluate your potential addition to the team, we need to know more about the experiences you've had and what preferences would you have.

Secondly, do not hesitate to use our forums, since they're the real deal, when it comes to a lil' bit o' interactiveness in 'ye talks.

Yeah, I hate to register all over the places too, but, what the heck, if you qualify, you end up doing just that anyway!