Hello and welcome back to our 72nd mod update on Halloween! On this edition it’s not about demons and witches, but about some deadly German behemoths of steel.

Hello and welcome back to our 72nd mod update on Halloween! On this edition it’s not about demons and witches, but about some deadly German behemoths of steel.

However, before we continue, we would like to welcome our three latest additions to the Development team here at Battlegroup Frontlines.

First is Archimonday, who will be taking over, and overseeing the production of the hand weapons in our mod. This includes everything from exporting, animating, and even making sure that each weapon is perfectly balanced towards one another, hopefully creating a very fun atmosphere for infantry lovers everywhere.

Additionally, we would like to welcome Kraetzer to our family, a very talented man, Kraetzer has taken his place in the Dev Team as an excellent modeler for us, and to assure that all of his wonderful work does not go to waste, aserafimov will create nice homes for his excellent work.

Battlegroup Frontlines has taken an initiative, using the free web service globally known as YouTube, and created a channel devoted to in-game videos of content across the board. Everything from Hand Weapons, to Vehicles, and even some out of game material in 3ds Max and other high end programs themselves. All the Developers will be posting videos on this channel from time to time, showing off some of their latest work, or nightly projects. So subscribe using everyones favorite yellow button and stay tuned to the BGF Mod YouTube Channel for future videos, as well as our website for future updates.

But this is Halloween, and we do not celebrate Halloween by surfing YouTube. No, in-fact we celebrate this strangest of celebrations by unleashing monsters onto our streets, and allowing them to torment our imagination. Well one thing is for certain, back in 1944, there was no tank that tempted the mind like our next monster; perhaps one of the most well known tanks of the Second World War: The Tiger I Ausf. E Late 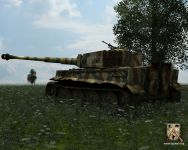 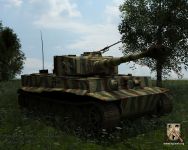 The Tiger I was first produced in 1942 as a response to German encounters with T-34's and KV-1's on the Eastern Front. Ultimately, this resulted in a specification for a 45-ton tank with an 88mm gun, heavy armor, speed and maneuverability. The Porsche firm began working on this new tank design but encountered serious complications. The Henschel firm then began working on its own model under the direction of Dr. Erwin Aders, drawing from its previous work on heavy tank designs. The two firms were to have prototypes ready for inspection by Hitler at Rastenburg on his birthday, April 20th, 1942. The Porsche and Henschel tanks were put through trials and, in spite of Dr. Ferdinand Porsche's friendship with Hitler, the Henschel tank won, in large part due to its superior maneuverability.

When it was introduced, the Tiger was the most powerful tank in the world. The 88mm gun was extremely powerful and the heavy armor made it almost impervious to attack. Even though its fearsomeness was to grow to almost mythical proportions, its combat debut was less than impressive.

The first Tigers to see combat were sent to the Leningrad area in August of 1942. Unfortunately, they were deployed single file over swampy terrain and in their first day of combat all four were knocked out, although their armor was not penetrated. Three were later recovered. In spite of this bad start, Tiger tactics were soon learned and other units were quickly trained and equipped with the Tiger. By the end of 1942, Tiger formations had been deployed to Russia, Africa, and Italy. Training centers were established in both Germany and France and eventually Tigers would be in service with ten Heer heavy tank battalions, one training battalion, three SS heavy tank battalions, and the Grossdeutschland Panzer Grenadier Division.

Over the Years numerous improvements were made to the Tiger I, eventually leading to models such as the Ausf. E Late, coupled with new tactics, the Tiger would become one of the most feared tanks of the Second World War, despite its low numbers and outrageous manufacturing cost.

In addition to everything else TrahnLee, a respected developer from the Eve of Destruction 2 mod, has put some bugs ingame which, for once, will definitely not bother you, but will guarantee you lots of fun. 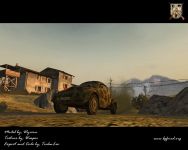 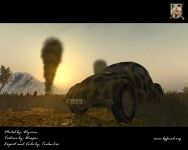 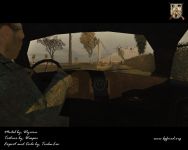 Battlegroup Frontlines is constantly on the look out for new talent that is willing to help us create a mod which will be fun, and easily available to the masses. If you think you have what it takes to be a Battlegroup Frontlines Developer, please stop by our forums and deliver an application, we are always in need of help, and open to all new comers!

Thank you for reading our Halloween Update, stay tuned to the Battlegroup Frontlines YouTube Channel, and our website for future updates. Goodbye everyone, and Happy Halloween!

Excellent work. The tiger texture and model are both very well done.. keep up the great work...

Both models are awesome. Great work.

it this mod has any realation between them and FH mod?

No, completely separate teams working on different theatres. FH is doing North Africa/Europe and we are focussing on the Eastern Front.

This is looking extremly well put together. Wish you all the best dor the mod!

I mean for the mod.