Next update is out now and adds in a proper night & day cycle.

0.32.0 is now available via the auto-updater. The main purpose of the update is bug-fixing, but I also added a night/day cycle, with a clock in the corner of the HUD. 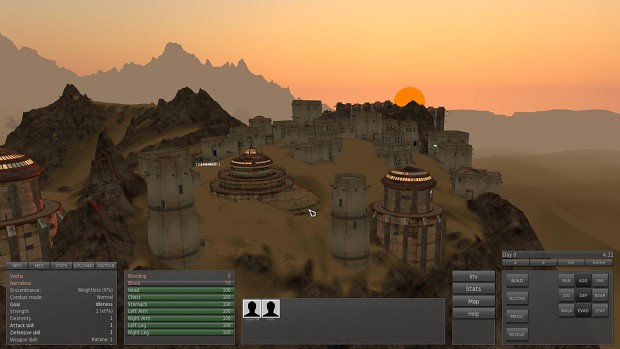 The main reason for the adding the day cycle now is that I need the game to have a concept of time. The next update will be adding mining and possibly crafting, and I also need to do the "Harrasment & Taxes" update. These need a concept of time, partly for the gameplay so you can have bandits saying "Have our money ready when we come back in 4 days!". And partly because it helps me tune the input/output rates of all the machines and resources to get things balanced.

Next update: Mining!
It won't be too long either, because I'm nearly done already.

Here is the official changes for the newest update:

-Added night/day cycle. Its only cosmetic for now, but it gives a concept of time, which is needed for next updates. Make sure you have "Fancy Shaders" turned on in the options to avoid ugly graphics bugs.

BUGFIXES
-Fixed bug with buildings not showing fully again after entering them
-Reduced the occurence of the bug when enemies don't go into ragdoll mode when they should.
-Minor performance boost, and possibly better stability in multi-threaded mode.
-Fixed inventory held by mouse cursor sometimes vanishing in certain curcumstances
-A few crash fixes
-Fixed bug where sometimes a character can't move after getting up from ragdoll state
-Fixed newly recruited characters being un-clickable
-You don't get bounty rewards from using your own cages now, and can only claim a bounty on a character once.
-Unconcious enemies no longer vanish when you save/load. This might slow performance if you hang around in an area for a long time and the bodies start piling up. Will add body decay or burial next update.

yay he fixed it and cool sunrise i cant wait for the later updtes when they add animals night hunting anyone?

that sounds awesome, kill a boar, skin it then sell it (the better your knife skill the better cut of meat you get the more you can sell it for). I'm wondering if theres going to be more terrain/ environment, snow and grass etc?

Love what you are doing with the game. Keep up the fun stuff to have :D

I feel proud to be a supporter of this game... :) Thank you!

Truly an epic update. I'm unable to play it at the moment, Some silly MCF error involving visual redist 2010 x86. Anyone have any ideas?

awesome! i look forward to your every update with huuge anticipation
and also... MINING!!! ( im crazy for all mining, smithing, "make your own equipment" sorta thing ; )

"You don't get bounty rewards from using your own cages now, and can only claim a bounty on a character once" YOU JUST ADDED THIS FEATURE!

You have to take your bounties to a police station instead, put them in the cages there.

I allready tested that fine feature, but you fixed a bug before the masses told you about it... HOW!

Because I am AWESOME! And humble. So humble. And handsome.

He's so humblesome. In fact, I have yet to even see an NPC named Captain Deathbeard.

Might be a nice idea as a high-level easter egg in the far reaches of inhospitable terrain. He could hint that he has the secrets of the universe. Naturally, the game would automatically load from the previous save if he died, and he would be neutral to all factions.

I have toke a long break from kenshi hopeing to come back to a more stable and better overall game and i think its almost time for me to come back =) I cant wait for next update i will download the game again when the next update comes around. And hopefully it wont crash on the first minute in lol.

Dude, I bought the alpha yesterday and have been playing like, 36 hours nonstop now. I think its for than time already. Its going to be lovely once the next update comes through.

I can't wait for horses or some form of transportation like a buggy and also... PETS THAT YOU CAN NAME

Captain, if I were rich, I'd give you all my money, so you could finish this game ASAP.
I love this game so much...

how long does it take in real time for the game to go rom morning to night?