To mark the 81st anniversary of the outbreak of the Second World War, w show off 2 weapons that would have seen use in those first few days: the Polish Vis pistol and wz. 35 antitank rifle.

Today marks 81 years since the German Invasion of Poland, the opening act in what would become the Second World War. While we at Forgotten Hope 2 are not focusing on this first front just yet, we will have 2 weapons used by the Poles and subsequently captured by the Germans in our upcoming version 2.6. These are the Vis pistol and the Wz. 35 antitank rifle. 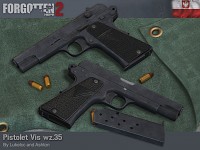 In the late 1928's the Polish military conducted a series of trials to find a new automatic service pistol. While they were looking for something small and compact, they ended up deciding to adopt the Browning Hi-Power that had been brought along by FN as an afterthought. Unfortunately for the military this deal would fall through. Relations with FN would sour in the aftermath of the fiasco that was the adoption of the Wz.28 BAR.

The decision was taken to instead develop a domestic design building on the strengths of the Hi-Power. Developed as the WiS by Piotr Wilniewczyc and Jan Skrzypinski working at the Fabryka Broni in Radom, the first designs were ready for testing in 1931. The final product would go into production in 1935 as the Vis. Just under 50000 would be made before the German invasion in 1939. 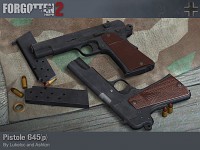 The factory in Radom was captured intact by the Germans, and the Vis would continue on in production. About a third of a million would be produced under occupation, making it the third most common pistol in German hands. Several hundred pistols were also smuggled out of the factory to the Polish Resistance. Our Polish Vis and German P645(p) were made by Lukelcc and Ashton. 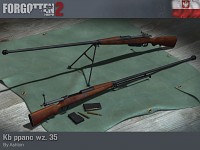 In the late 1920s the Polish military began work to develop an infantry antitank weapon. Work began first on developing ammunition, with the winning design settling on a standard 8mm Mauser cartridge with a considerably larger case. The bullet was made of soft lead, and was intended primarily to cause spalling to armour plate rather than to penetrate.

At the same time, a rifle was designed to take this new cartridge. The rifle was essentially an oversized Mauser action, feeding from a 4 round detachable box magazine. The barrel was fitted with an effective muzzle brake. Expected lifetime for the barrel was about 300 rounds due to the high pressure loading. The design was adopted in late 1935, and 7610 were ordered as the Wz.35.

The rifles were delivered from the factory to a central store, and were not sent out to the Army until mid 1939. They were packed into boxes marked do not open; surveillance equipment, and crews were trained in secret. In theory, the rifle was capable of taking on any German or Soviet tank involved in the invasion, with reported penetration of 33mm at 100 metres.

After the invasion, the Wz.35 would be used by the Germans, who would sell them onto the Italians in 1941. It is not know exactly how many were actually made, as the records were considered top secret and destroyed in 1939. Our Wz.35 was made by Ashton.