Twisted Insurrection's First Public Beta has Finally Been Released! Check this news post for the download location and Information.

The year is now 2019. The Tiberian World now stands with a very uncertain fate. The two most powerful and influential forces on the planet are trapped in a never ending dead lock of war and combat. Whilst the Global Defense Initiative has suffered many blows and military defeats, the faction itself still stands strong and has shown the world its amazing ability to endure harsh punishments and has recovered much lost ground. The Brotherhood of Nod has struggled and triumphed over its enemies, only for its victory to be short lived by the death of Kane the Messiah, causing an ever lasting deterioration through the Brotherhood and leading to defeats and chaos amongst the large faction. With the end of the First Tiberian War comes the dawn and age of a new, second Tiberian War, with new terrifying possibilities and potential. The fate of Earth lies dangerously unknown. Welcome to the Twisted Insurrection commander.

"Sir... I fear an Insurrection is imminent..." - Anonymous 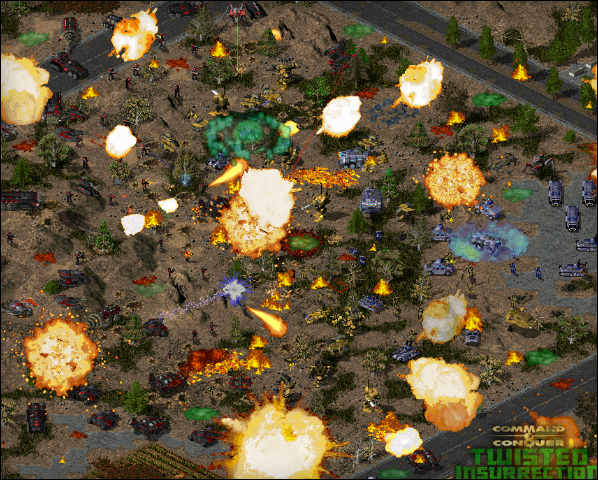 Players should read the instructions on how to install to avoid any issues, as well as the known bugs and issues thread to prevent any confusions and false bug reporting. The Twisted Insurrection team would like all bug reports to be filed in this thread in order to keep the forum organization.

Widescreen resolutions don't allow the battlefield control to be established in the first GDI mission. If you start it on a different res, then save, and continue playing from there, it should work.

I don't advise using resolutions higher than 1280x1024 anyway. The only map that causes scrolling issues that I know of with high resolutions is GDI Mission one so it shouldn't be a problem.

Someone please tell me i'm dreaming.

that means your dead

When you first start up the mod, the main menu appears as a black screen.

Twisted Insurrection is Standalone you don't need to put it in the Sun Directory.

1 - Download TIPublicBeta1.rar
2 - Extract the Containing Folder to any location on your computer
3 - Once Extracted, open the TI Public Beta 1 Folder and Set GAME.exe compatibility to Windows 98 (IMPORTANT!)
4 - Run GAME.exe and play

Follow the Installation instructions! Twisted Insurrection is standalone, it doesn't need Tiberian Sun to run. Just extract the folder from the download, open it, set the .EXE compatibility to Windows 98 and you're good to go.

Now you made me happy!

Hmmmmmm... Nod infantry uses voices from C&C3! And I got impression from Aro's comments & posts around PPM and ModDB that Aro rather either despises or ignores C&C3.

I used random voiceovers from C&C3 (as well as from some other games) to add more variety and atmosphere to Twisted Insurrection and I feel I did just that. Me disliking C&C3 doesn't mean that I don't have to use voiceovers from it, even mods like Shockwave use voices from other games.

Thanks for the reply, now it's clear. Still, thought that such a TC like Twisted Insurrection, would use only own made voices/sounds.

Infantry units, err, burn too fast in the middle of the battles. :-P At least when you use vehicles only, and infantry stand there... they often become ashes right away when an encounter begins (w/o any units using flamethrower technology at all).

Making custom voiceovers that keep a good quality is very difficult to do without proper recording material, we can't just buy a web-microphone and edit the sounds (well, we can but the quality would be rubbish without proper equipment). I think I'm allowed to cut corners somewhere in the jungle that is TI.

Then learn what units strengths and weaknesses are before you send them off to die. Who commands infantry to attack a flame tank? :P

Someone who has loads of technicians that they don't want? ;P

Technicians are different, they don't have a soul. :}

Explosions, fires around... burn every infantry (mine & AI's) in sight. Does it count as... imbalance?

PS You really don't have any friends, musicians? Pretty easy to record voices with proper friends.

Out of all the people in England and the rest of the world that I know, I'm not going to bother them with such a pointless issue. Why fix what isn't broken? Besides, the current voiceovers fit perfectly fine.

Except from Nod not having Silos, Flame Infantry getting pwnd by flames and the AI having one too many bonuses in unit stats I'm very satisfied with this beta. The balance is a bit off but that too can be fixed. GOOD job.

Nod do have Silo's, Tiberium Reactors double as silo's. Flame soldiers use the same armor-type as the other light infantry and as we can't add new armor types (yet), not much can be done about this for balance reasons. I personally think the balance is fine, you're going to have to go into more detail. Post reports here: Ppmsite.com

So, from playing it so far, aside from that hangup I had on the first GDI mission(Which turns out, it just takes a little bit more time for the battlefield control to establish at higher res's)
It's pretty good. I keep crashing on Fields of Green though, after I have seemingly killed off the entire first wave. I usually hear a large sounding explosion that seems to be just in the shroud at the lower right corner of the map. I'll investigate and see if it's preventable.

I noticed problems on GDI5 as well, I'll be looking into it for the future patch.

It's about time, imma getting it NAO! XP

why i can't play it it crash the game before it starts the campaign and the skirmish game.....why???? did it not compatible to my pc or it's somethings wrong???

the harvester's body is not in the right selection body.....

somethings wrong with the nod harvester...

Yes, I know and It's going to be fixed in the first public patch, as I've said 100 times.

Does the AI put up a fight or are they as useless as ever?

The AI is incomplete at the moment, but it's definitely a lot better than Tiberian Sun's rubbish pussy AI.

For me the AI is insane. I keep getting beat by AI level 1. They continuously rush me with a huge amount of units.

I've got a problem. I'm running TI on Windows 7, and everytime I load a skirmish game, it crashes. Any ideas?

Did you set the GAME.exe compatibility to Windows 98?...

No problem, always be sure to double check.

does TI will have a naval warfare in the final release??? sorry.....i just like to control air, ground to water.....hehe...

all the old buildings of nod and gdi in TS Will change??

there is somethings wrong in mole too.... it's changing the shp when it is deployed....

To answer your questions dean24. ^^


Aro is interested in the idea of Naval combat.^^

"dean24" wrote: all the old buildings of nod and gdi in TS Will change??

"dean24" wrote: there is somethings wrong in mole too.... it's changing the shp when it is deployed....


Those are actually part of the same answer. All TS placeholders like structures, deployed artillery, goliath, rail-gun tank and so on will be replaced.

Well I played through the GDI campaign so far.. It was a bit disappointing to see that it only has 5 missions. After all those years you guys were working on it people should mean you have more than that by now.

All in all it is a fantastic job so far! I can't begin to imagine how must work it must have taken for all those new features.

I really much like the story starting by the NOD End of C&C1. It's a fresh thing that the bad guys finally won for once.

At the moment I'm stuck in the 2nd NOD mission it's really stupid that the flame throwers aren't imune to the fires they lay. I mean they should have some protection suit like it was in Renegade if they are using that gun as standard. Also unsure how to pass the snipers or roadblock.

Well I guess this was just a test release anyway to show what you've got so far. Keep working on it I'm looking forward to see the next version of your game.

I've explained this 100 times before. Both the GDI and Nod campaign will have many, many more missions, this is only a beta and therefore isn't the complete product. You can expect to see a lot more in the future.

It's not possible due-to limited armor types for certain infantry to be immune to flames, but I will be decreasing the amount of damage done to infantry by fires in the first patch. There are alternate routes and hidden secrets in the missions, try different tactics and different routes. Unlike in TS, you have to use your brain a lot more in TI.

Thanks for the good feedback, I'll be looking forward to hearing your additional points. :)