Turbulence is back with tons of information & concepts! Check us out and we're looking for interested developers!

Welcome to tonight's update of Turbulence, and we certainly have a lot to cover!

We have some exciting things stirring in the cauldron, including a development blog, Talk of major studio involvement, and tutorials, resources, and tools for the community. We also have a plethora of concept art & designs to discuss with the followers, and talking about our goals and missions.

Our development blog can be found at Turbulencegame.wordpress.com where we'll try to update it with short updates every few days. Remember to subscribe to the RSS! The blog's purpose is to be more candid and more geared towards fellow developers and fans interested in a behind the scene's look at what goes on in our team. There will be specific tips, tricks, and short tutorials & process videos / step images that are exclusive to the blog so if you're interested in what we do and how we do it, that's where to find it.

We will be releasing in the coming updates short tutorials and videos that cover the process of our design and development - we're especially interested in addressing specific questions we are asked by the community (either modDB or elsewhere) via the tutorials. Right now we're only showing off concept art but we're more than willing to share tips on concept design - on that note we have quite a bit of design to show!

Our entire project aims to be a competitive, fast paced, white knuckled first person shooter experience with a team-work & strategy oriented slant, and character customization / RPG elements such as persistent "leveling" & personal development of the players own characters.

Level 1 takes place in the snow mountains of a as of so far fictional area. The map revolves around a bridge, crash site, and communications building and other small infrastructures. The team's tilt rotor (aircraft) has crashed, colliding with a rather large bridge over a valley in the center of the map. Both teams vie to recover the bomb & important information within the black box of the aircraft. The crash site is pinned down by sniper fire from multiple directions and its a dangerous run to get in. You must work as a team deploying Shields and so far undisclosed class mechanics to obtain the objectives and retreat to safety. Every capture results in team switch. 2 out of 3, 3 out of 5, etc wins, or most captures in a set period of time with sudden death no respawn in the event of zero caps after time has expired. In a twist on this classic game mode of capture the single flag (versus standard CTF with two flags), the team who wins the 1st round may subvert the objective and plant the bomb at the enemies team base, if successful they win the round. Defense of snipers and other unreleased classes will become necessary after the 1st round. 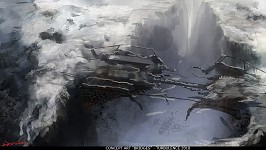 We haven't released many details about gameplay which is something I've been getting asked a lot, mostly because our ideas are either hushed up until we've implemented them or not finalized, however we'd like to introduce you to the mechanics of the assault class:

The Assault class wields the Nero-Energy Manipulating Assault Weapon. The large ball you see in the weapons middle section deploys, dropping to the ground in front of the player and rolling in front of them, stretching and exploding into a large energy wall that renders most incoming projectiles useless. This is effective for quickly taking ground, rushing enemies, or retreating with a map objective in tow, all the while your team mates are safely behind your wall (However they are not safe, nor are you, from enemy fire from behind or flanks) - the drawback to using your shield? The gun also runs off the energy it provides, while it will slowly recharge, you must wait a short while before your gun will do effective amounts of damage again.

Next is the sniper class, who's core ability beyond sharpshooting and havoc-wreaking, is the ability to "hack" - in our world, small mini games that can be ran through while waiting in cover for a kill or defending an area - Ideas for what exactly this could do are still up in the air, but current favored design is jamming of enemies "comm helmets" - the helmet they wear that provides the hovering Virtual Heads Up Display or V-HUD, useable on a cooldown only within a specific area of the maps communications station. We have some very fun ideas for what this would do, from blurring / partial / total loss of vision (through various graphical effects).

We are nearing completion of the design of the classes and the 1st level, we're picking up development steam and are charging towards our goals. We have lofty seemingly over-zealous ideas but our short term goals are within immediate reach and plausible. As with all game development we're setting the bar high and will make compromises along the way. We want the community to be a strong proponent of our design and to drive our ideas & development, and in turn we give back to the community through updates, media, insight into the development, and eventually the game itself. Our official website should be up soon!

If you are interested in helping with this game project, please contact us via PM, we are currently looking for talented 2D & 3D artists, just a few hours a day, a few days a week!