Tsardoms Total War presents a host of new historical events which will trigger for the faction of Wallachia in the next version.

The Principality of Wallachia Events

Parvu Craiovescu is the son of Neagoe Strehainaul and later became a member of the Princely Council of Wallachia with the title of Mare Vornic. He was also the father of the later Voivode Neagoe Basarab.

Barbu Craiovescu I was a great boyar of the Craiovescu family and the first to hold the diginity of Great Ban of Craiova. He was a member of the Princely Council in 1482 and Great Ban in 1492, 1497 și 1498-1519. He foudned the Bistrita Monastery and became a monk under the name of Pahomie.

Vlascan, the son of Florea (or Florev) is the first well known and documented member of the Florescu family. Historically, Vlascan appeared in the records during the reign of the Voivode Mircea the Elder. He avoided joining the Princely Council of Mircea due to the Voivode's aggressive anti-Ottoman policy. He joined the Princely Council of Voivode Alexandru Aldea and advocated a policy of appeasement towards the Ottoman Empire.

Historically, Vintila was a well known great boyar who was part of the Princely Council during the time of Vlad the Impaler. Like his father, he favoured a policy of reconciliation and appeasement of the Ottoman threat. He was part of the court of several Voivodes and his sister married the Voivode Basarab the Young Impaler. 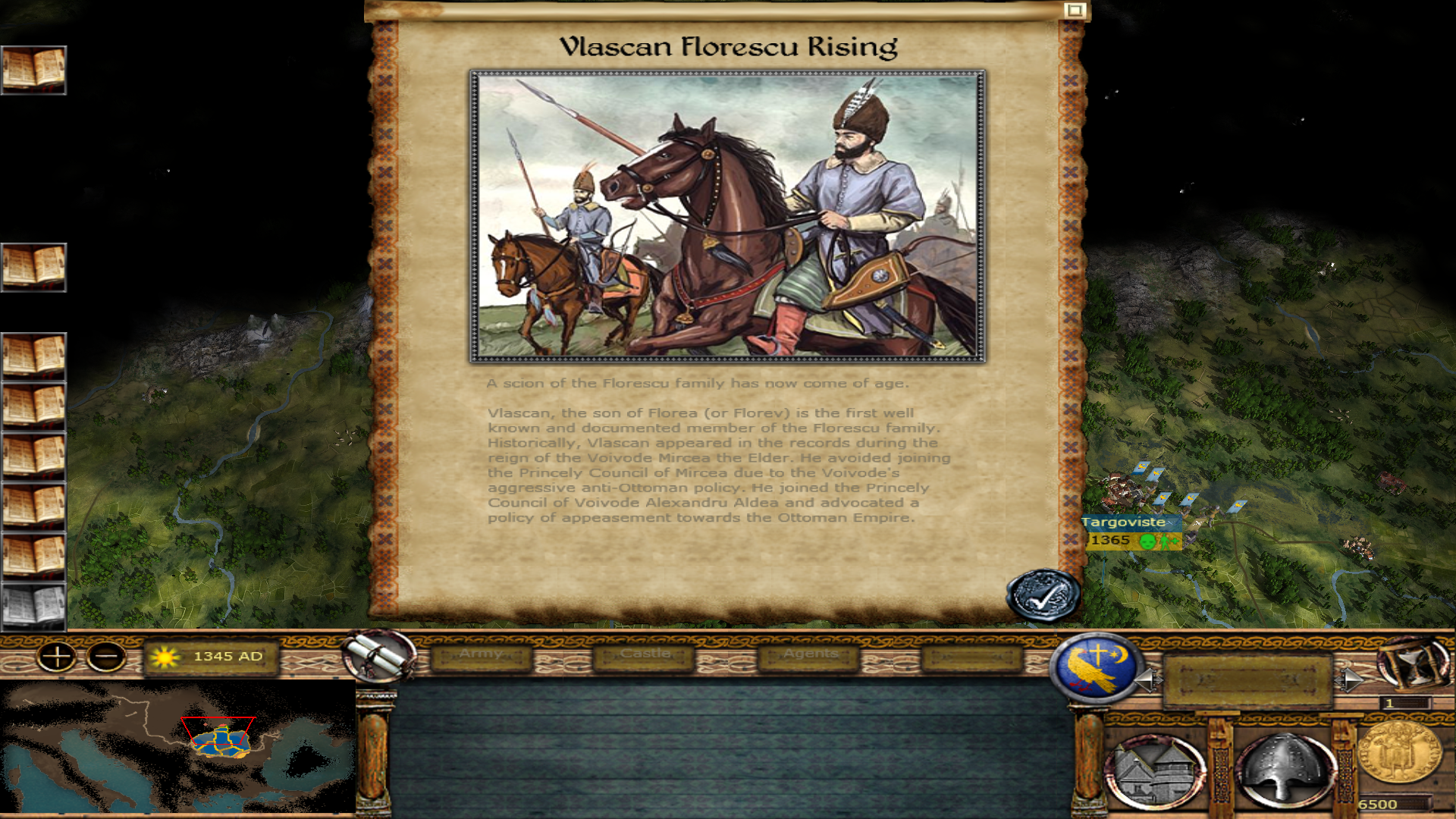 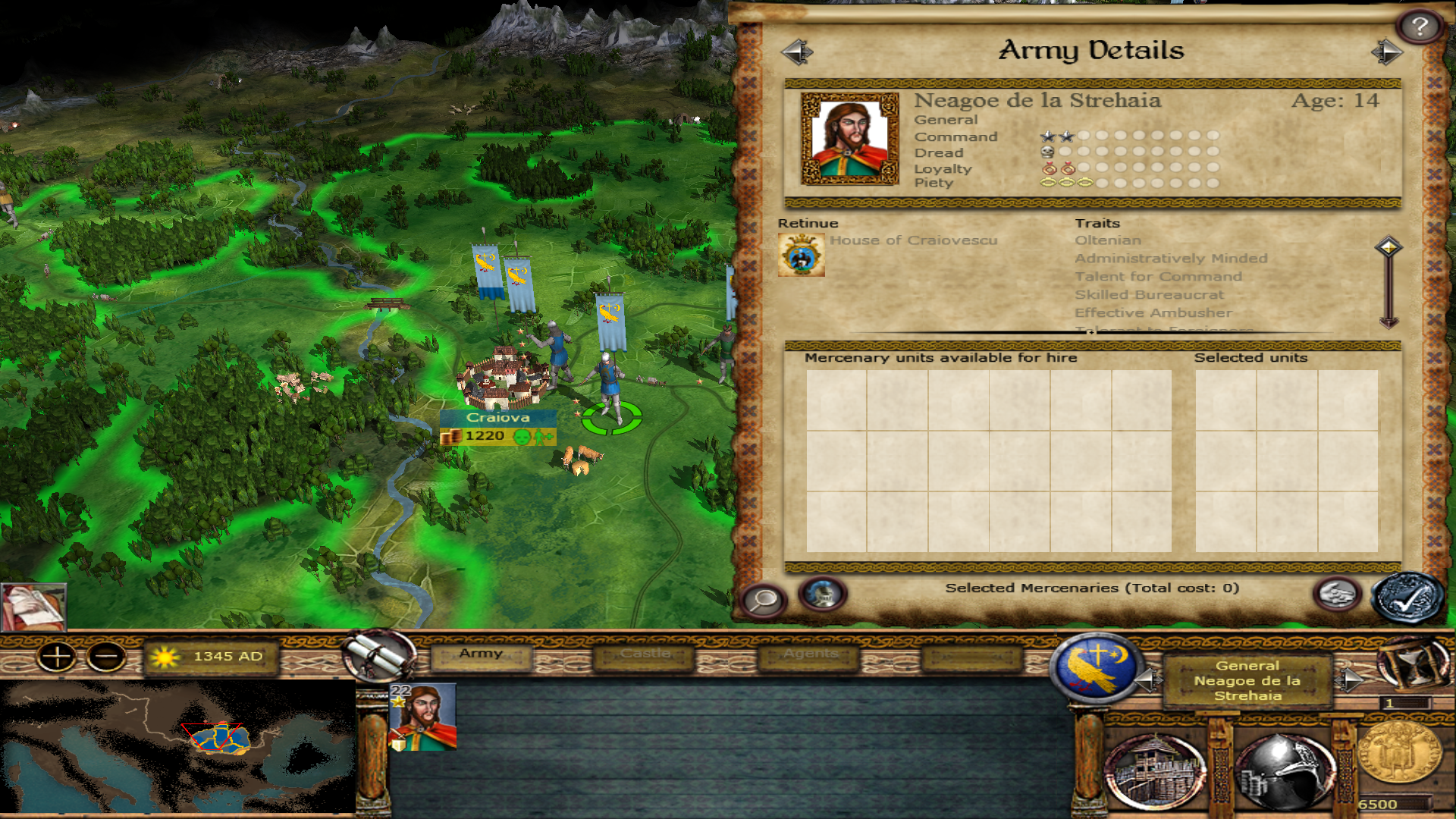 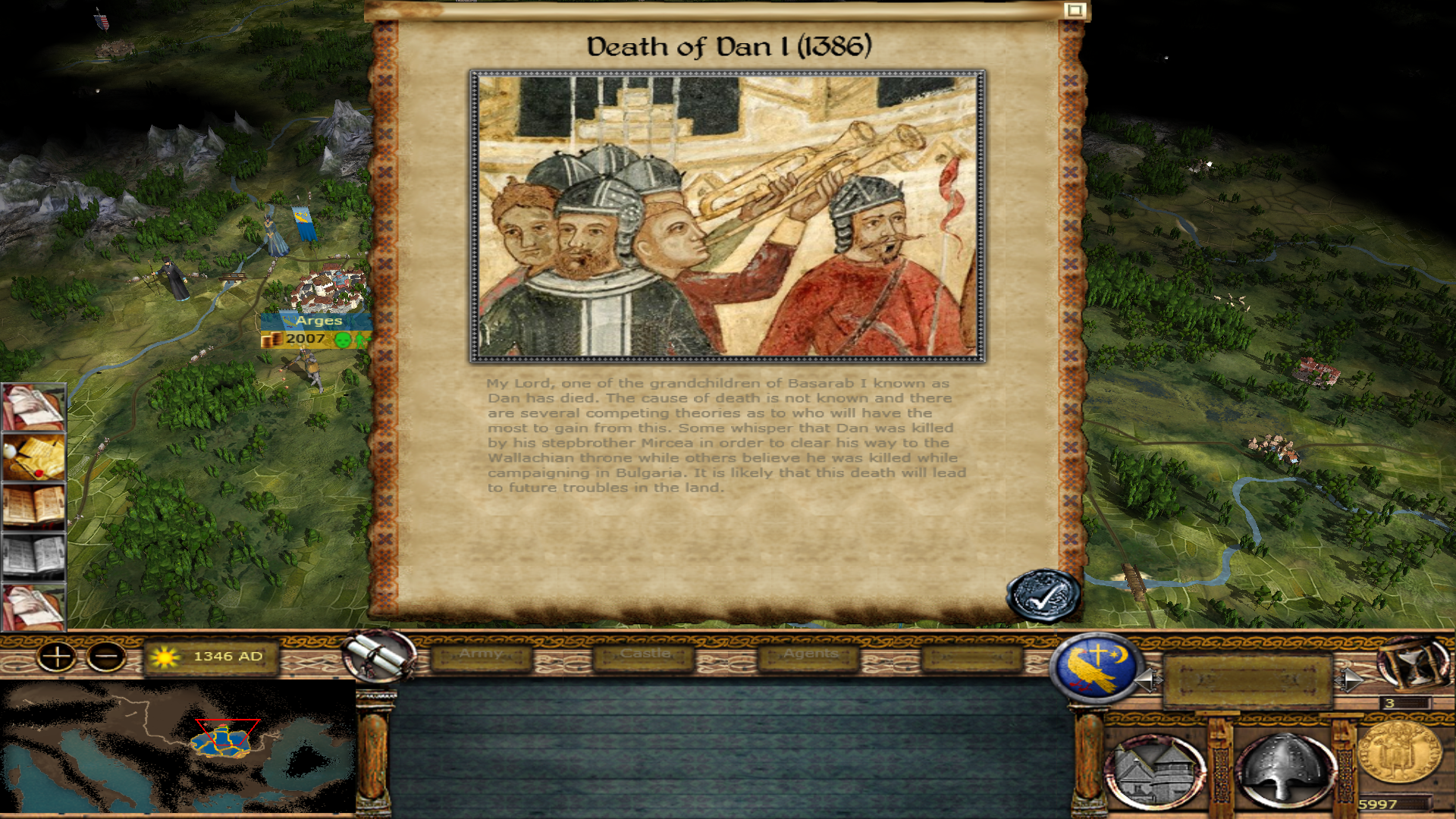 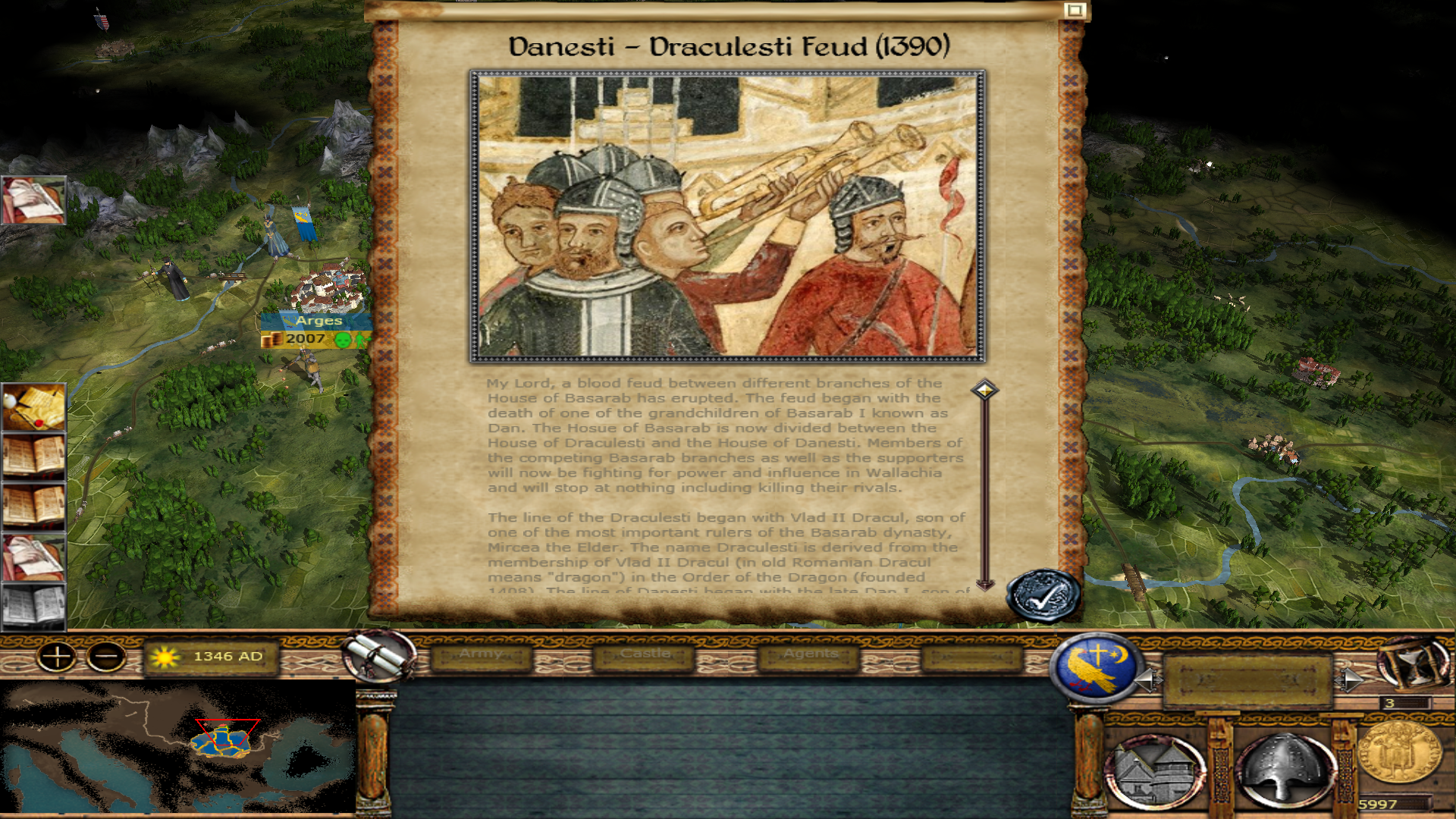 My Lord, a pretender under the name of Vlad is making a claim to the Wallachian throne! Vlad claims to be a scion of the House of Basarab from the side of Dan I and as such claims to be of royal blood. Aided by rebellious nobles and Turkish money and mercenaries, Vlad has raised an army and is now threatening the Wallachian capital. This pretender must be defeated and executed as soon as possible.

Historically, Vlad I removed Wallachia from the anti-Ottoman coalition, leading to his official non-recognition by the Hungarian kingdom and its allies. Struggles to remove him from the throne and return Wallachia to the coalition continued throughout his reign, though when the expedition of Stephen of Lozoncs in May 1395 ended in a military disaster, the Hungarian king said that "Walachia was lost and the Danube fell into the hand of the enemy".

In July 1395, a Hungarian expedition led by Sigismund, probably seconded by Mircea the Elder, captured the Turnu fortress and left a garrison loyal to the king. Throughout the following year the struggles to remove Vlad I continued. These were interrupted only by the participation of Sigismund and his vassals, including Mircea the Elder, in the campaign which resulted in defeat at the Nicopole. During this expedition, the territory of Wallachia was bypassed in order to avoid the Wallachian and Ottoman military forces stationed there. After the defeat, those who tried to find their way across the Danube were either ransomed or executed. This reaction from the Wallachian voivode can be attributed to the massacres by the Crusaders of Bulgarian Orthodox Christians in the conquered cities.

In October 1396, another military expedition headed by Stibor, the Transylvanian voivode, led to the defeat and capture of Vlad, who died in captivity. This allowed Mircea the Elder to regain the throne in January 1397. 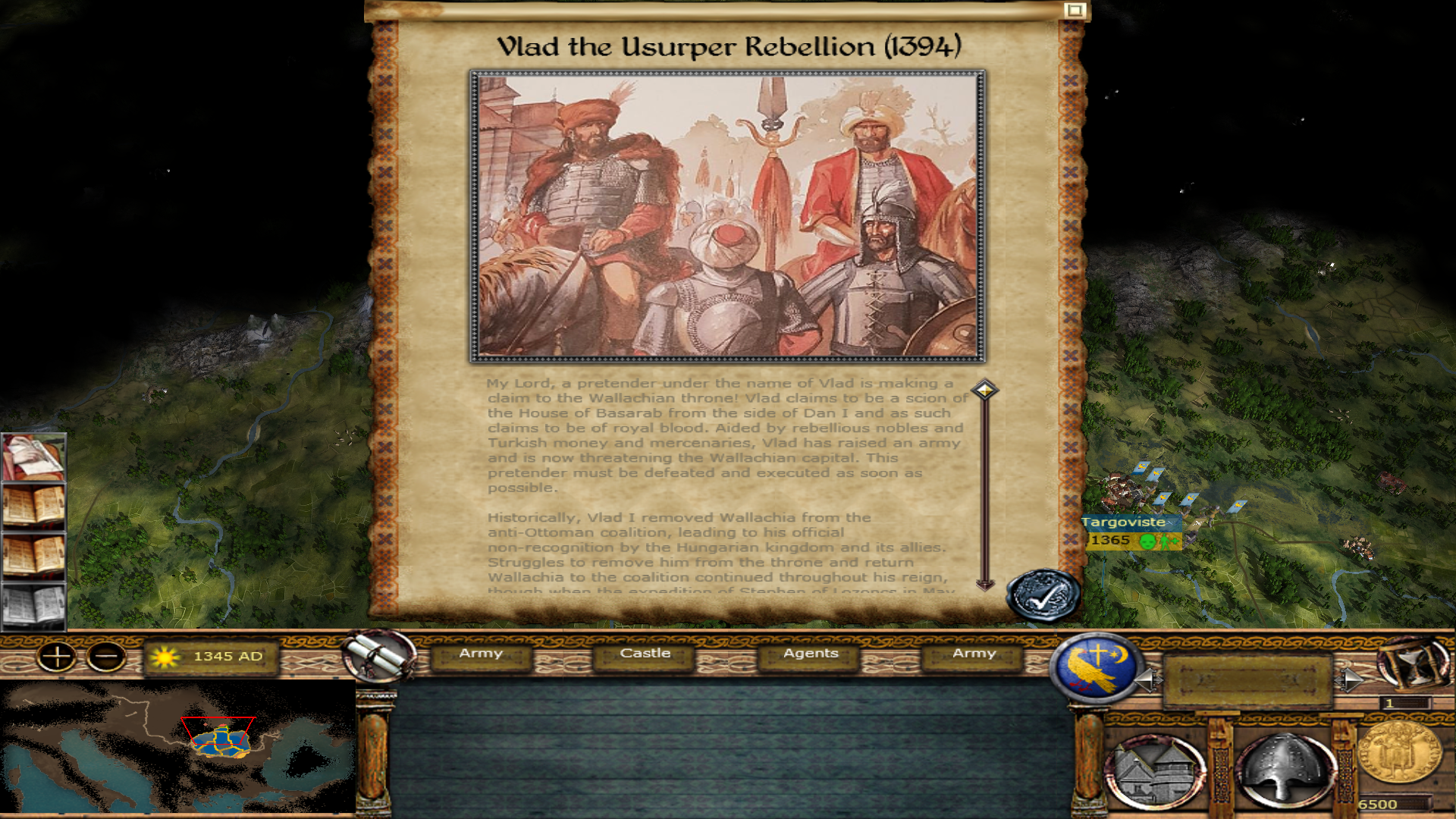 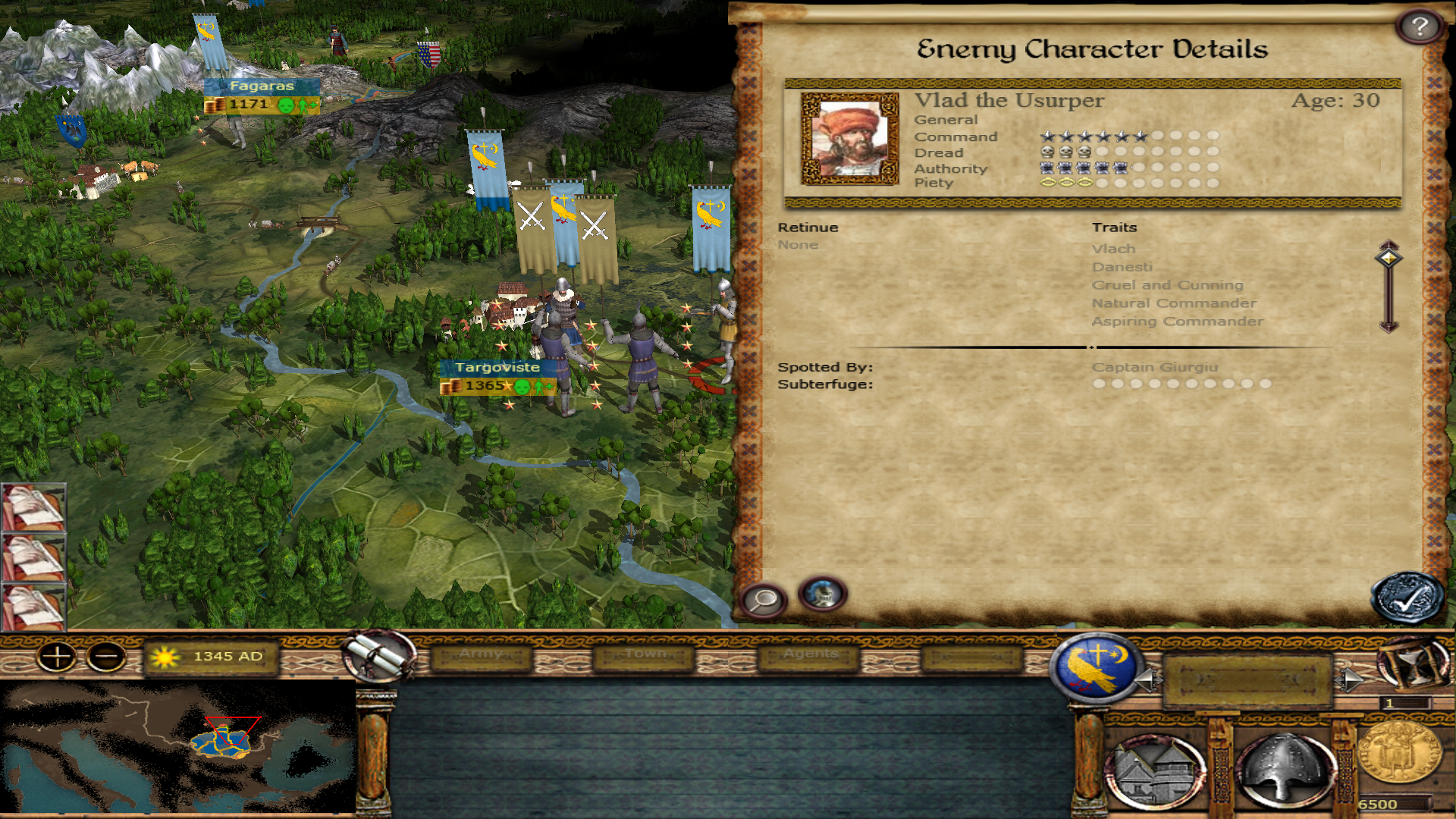 My Lord, a scion of the House of Basarab has now come of age and is at your command. Dan II is the son of Dan I of Wallachia and grandson of Radu I. His father was the eldest son and successor of Radu I of Wallachia. As such, Dan is the nephew of Mircea the Elder. Despite the fact that his uncle Mircea was a great rival with his father, Dan has so far stayed loyal to his uncle. Dan II is known to be a very able military commander

Historically, Dan II was a voivode of the principality of Wallachia, ruling an extraordinary five times, and succeeded four times by Radu II Chelul, his rival for the throne.

Dan II first took the throne in 1420, losing it in 1421, but regaining it that same year. He was primarily able to regain the throne many times because he was an able military commander in the field. In 1423, Dan II led an army against the invading Ottoman Turks, defeating them in battle. The Ottomans were invading in an effort to place Radu II back on the throne. In 1425, he again defeated the Ottomans,[citation needed] winning an important victory in a battle that was the first recorded mention of Wallachia using mercenaries in their army. In that battle, Dan II had employed a large number of Bulgarian soldiers. In the spring of 1427, Dan II removes Radu II from the throne for the last time, again defeating the Ottomans in battle, taking back the fortress at Giurgiu. In all likelihood, Dan II killed Radu II either during or after that battle, as the latter disappears from historical records afterwards. However, written accounts of the time are sparse at best, and it is not known for certain. On 3 June 1428, Dan II led an army against the Ottomans at Golubac Fortress, which ended with a treaty that would allow Dan II a semi-peaceful rule until 1432.

In 1432 his country was invaded by a large Ottoman army. Dan was defeated and killed in battle. He was succeeded by Alexandru I Aldea, a son of Mircea cel Batran, who would reign until his death from illness in 1436, and with him being replaced by Vlad II Dracul, father to Vlad Tepes. Dan II's son, Basarab II, would replace Vlad Dracul's son Mircea II in 1443. However, his son lacked the military ability of his father and would lose the throne within a year to Vlad Dracul.

Infante Pedro, Duke of Coimbra, an indefatigable traveler, possibly the most well-traveled prince of his time, and brother of Henry the Navigator, met with Dan II of Wallachia during Pedro's service to Sigismund, Holy Roman Emperor. 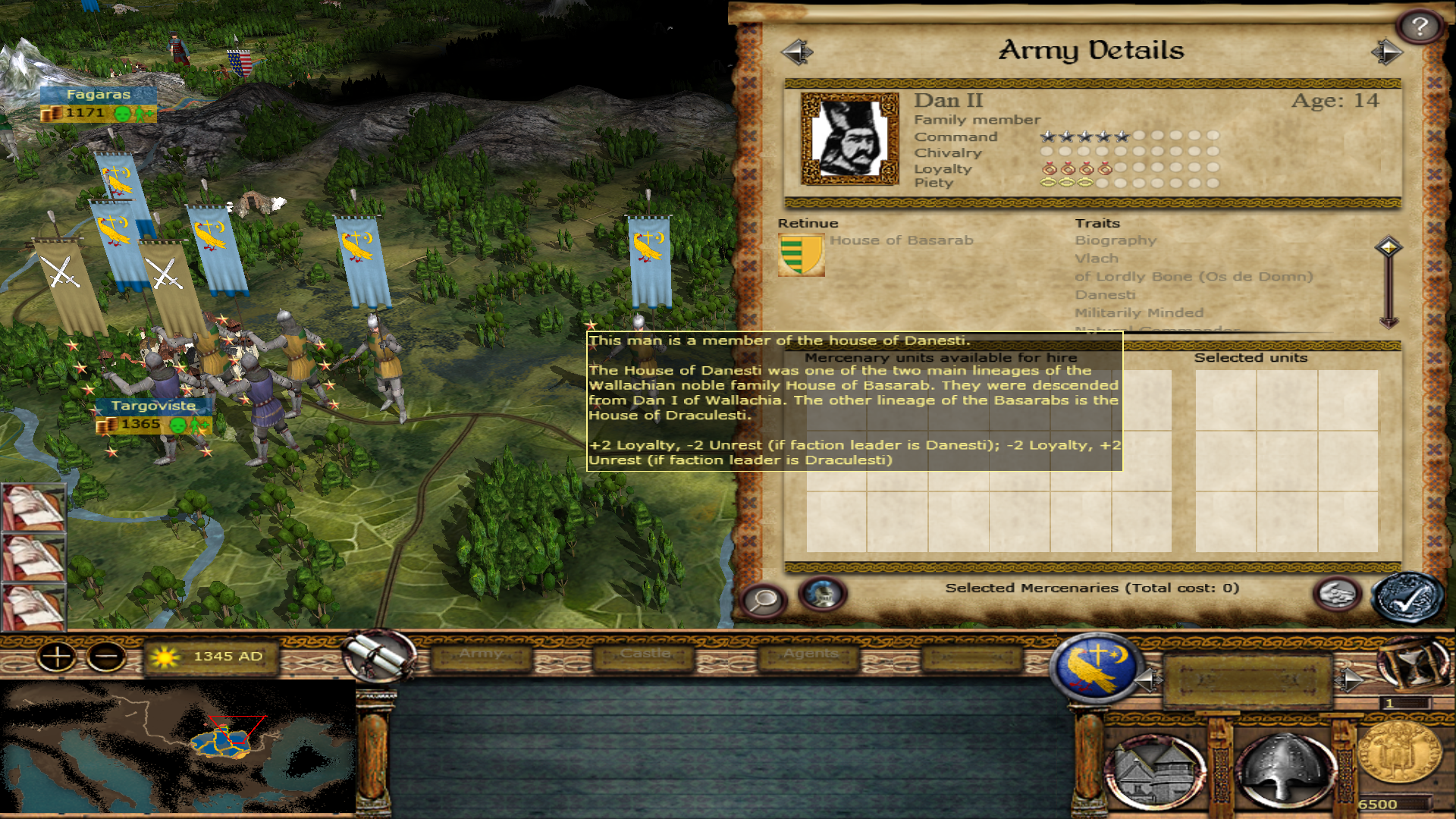 My Lord, a pretender is making a claim to the Wallachian throne! Radu II Prasnaglava (the Bald) is a younger son of Mircea the Elder and as such part of the House of Basarab. Using this claim he is now marching on Targoviste. Aided by rebellious nobles and Turkish money and mercenaries, Radu has raised an army and is now threatening the Wallachian capital. This pretender must be defeated and executed as soon as possible. Any family connections must be ignored as this rebellious scion of the House of Basarab is threatening his own family and making war on his own people.

Historically, Radu Prasnaglava became Voivode on 4 separate occasions and was probably the last voievod of Wallachia to assert control of Banat and southern Basarabia. Dobrogea was lost in 1417. His short intervals of rulership were marked by frequent and violent clashes with his rival and cousin, Dan II, for the throne of the principality. He found shelter and military support from the Ottoman Empire, and it was this submission to the Ottomans which ultimately caused Wallachia to lose Dobrogea and other territories. Radu II is last mentioned in the spring of 1427, when Dan II attacked him from Transylvania, retook the throne, and most probably killed him. 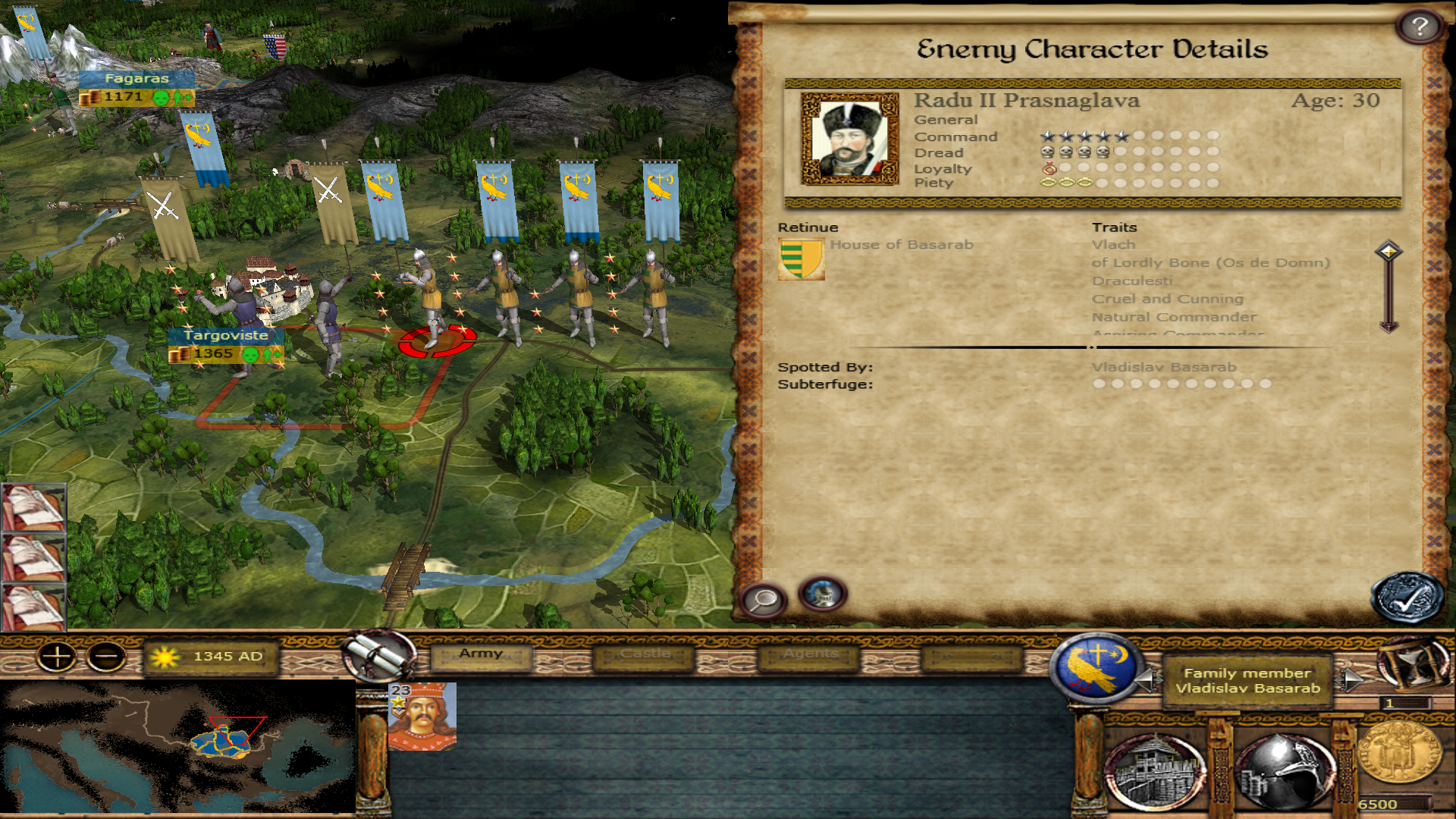 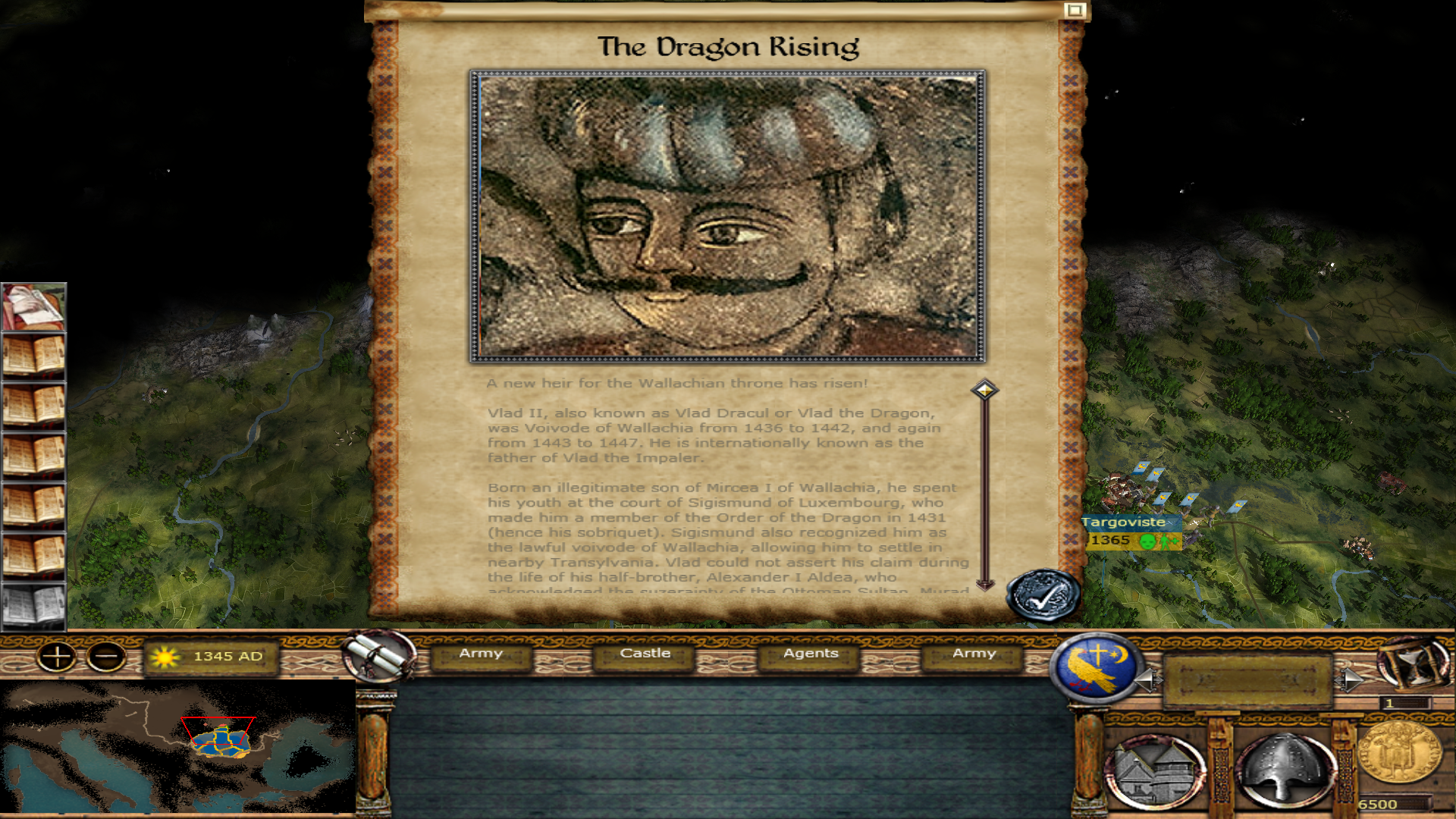 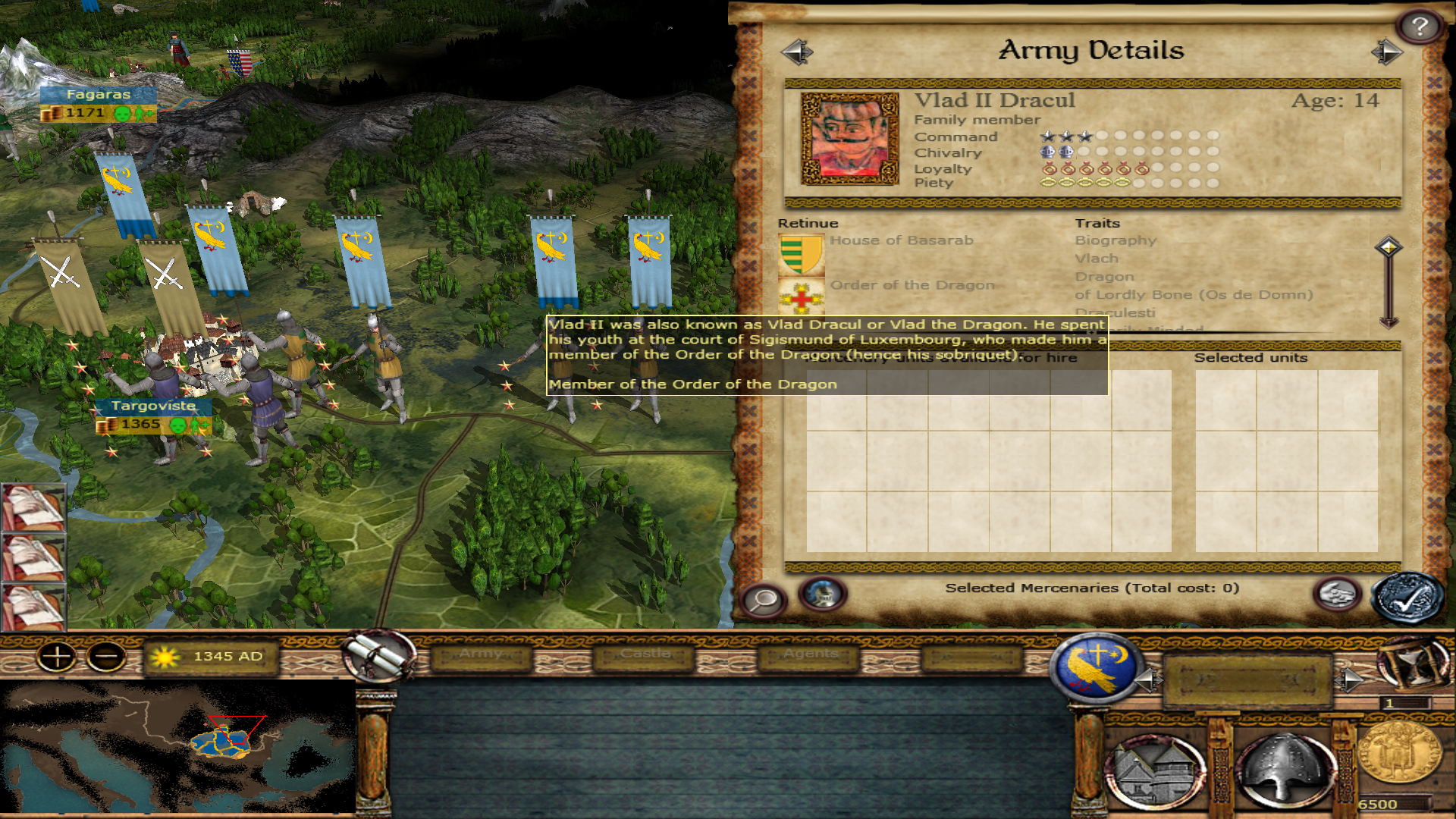 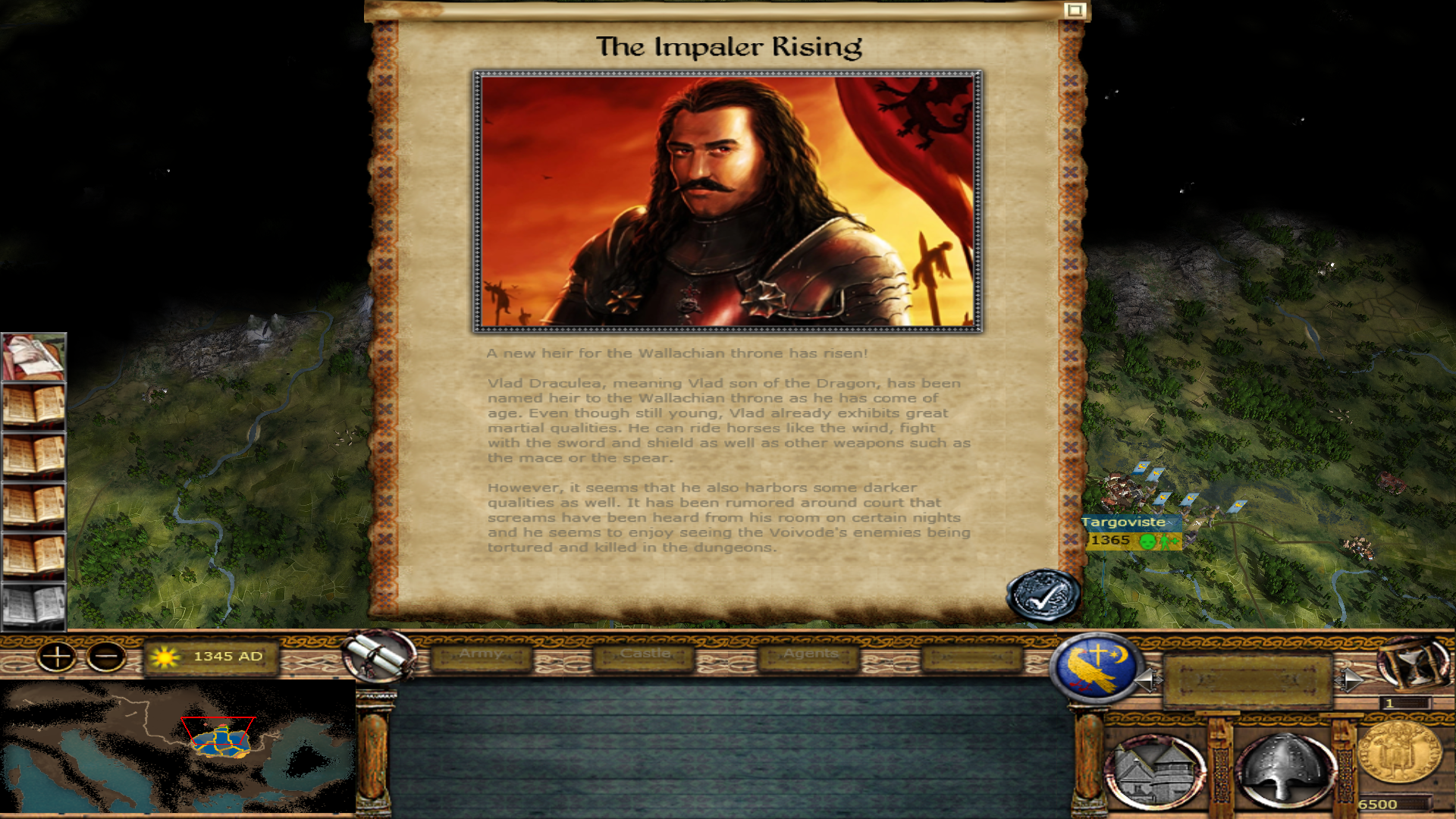 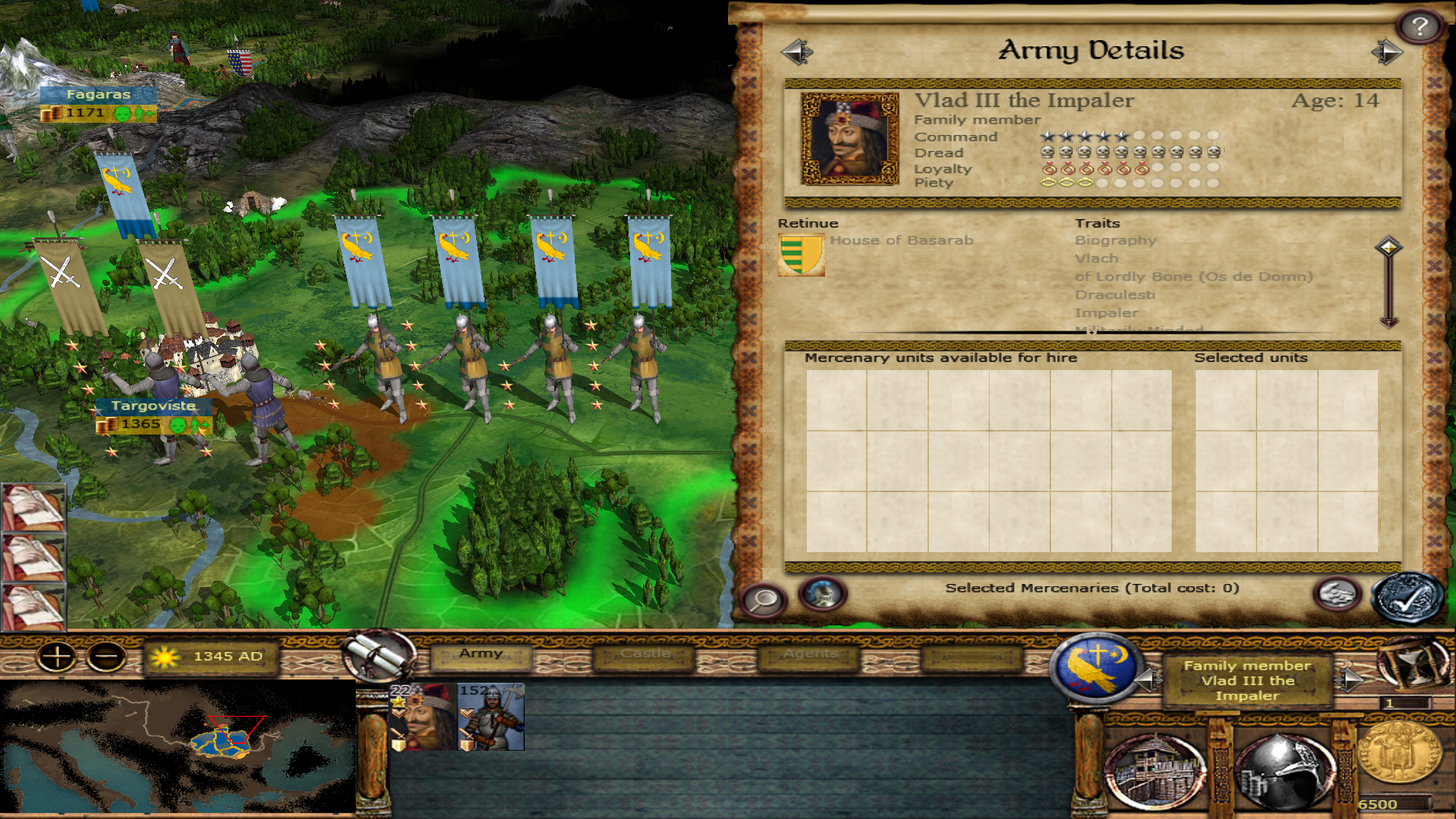 My lord, a scion of the House of Basarab has come of age. Laiota Basarab is the son of Danciu and grandson of Dan II. As such, Laiota is a member of the Danesti branch of the Basarab family. He is the cousin and rival of Basarab IV the Little Impaler.

Historically, Laiota Basarab was Voivode of the principality of Wallachia in the 1470s, repeating the achievement of Dan II in being elected by the boyars as voivode on five separate occasions. Moreover, he succeeded the same ruler (Radu cel Frumos in Basarab's case) on four occasions. Two of his reigns also surrounded the last period in which Vlad III the Impaler ruled over Wallachia. In 1479 he joined in the Battle of Breadfield on the Hungarian side fighing against the Ottomans and trying to regain his throne. 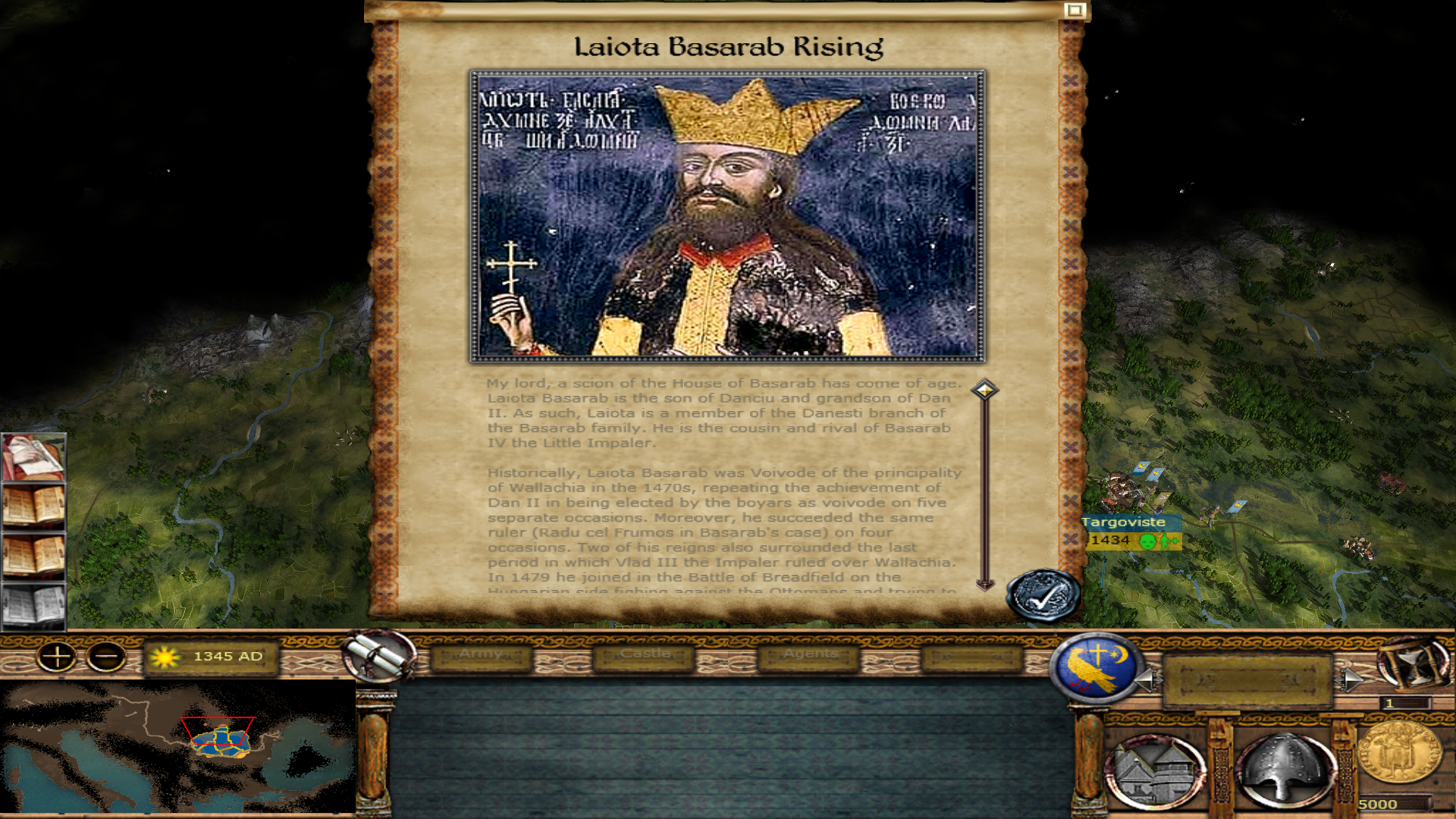 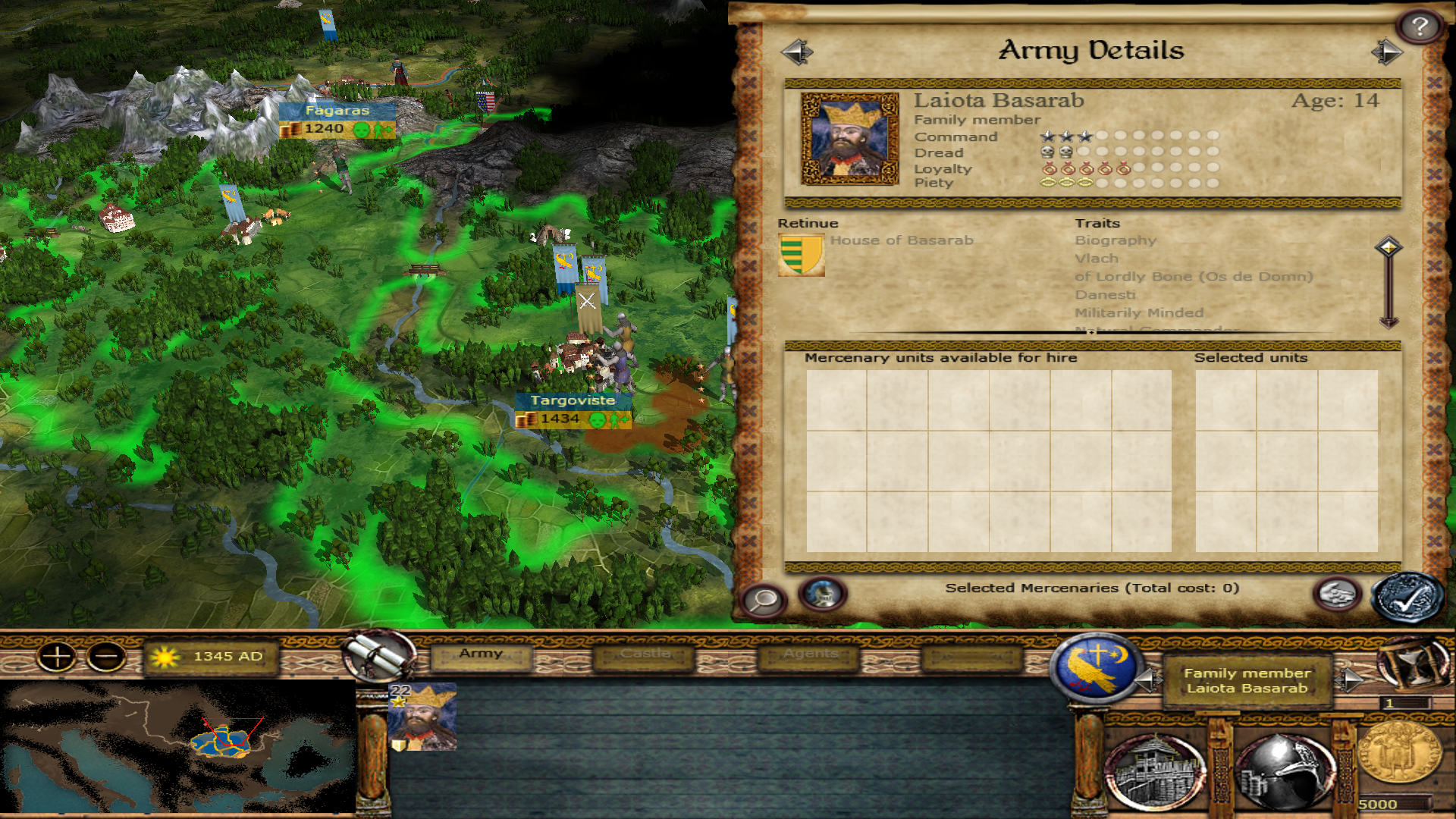 My Lord, a pretender is making a claim to the Wallachian throne! Radu Basarab known as the Handsome, the son of Vlad Dracul, and the brother of Vlad Dracula the Impaler is marching on Targoviste. Aided by rebellious nobles and Turkish money and mercenaries, Radu has raised an army and is now threatening the Wallachian capital. This pretender must be defeated and executed as soon as possible.

In 1436, Vlad II Dracul ascended to the throne of Wallachia. He was ousted in 1442 by rival factions in league with Hungary, but secured Ottoman support for his return by agreeing to pay tribute to the Sultan and also send his two legitimate sons, Vlad III (the Impaler) and Radu (the Handsome), to the Ottoman court, to serve as hostages of his loyalty.

The boys were taken to the various garrisons at Edirne. Radu eventually became friends with Murad II's son, Mehmed II. While at the Ottoman court as boys, Vlad and Radu were educated in logic, the Quran and the Turkish and Persian language and literature. Due to his famed beauty it is said that Mehmend fell in love with him and the two shared a romantic relationship.

Radu, at the age of 22, became a leading figure at the Ottoman court. He was a commander of the Janissaries and in the campaign against his brother Vlad III the Impaler, Radu was at the head of 4000 horsemen. He is believed to have taken part in the operations that are collectively known as the Fall of Constantinople. Eventually he would be placed on the Wallachian throne after the defeat of Vlad the Impaler and would rule the Principality under Ottoman suzerainty on four separate occasions between 1462 and 1475. 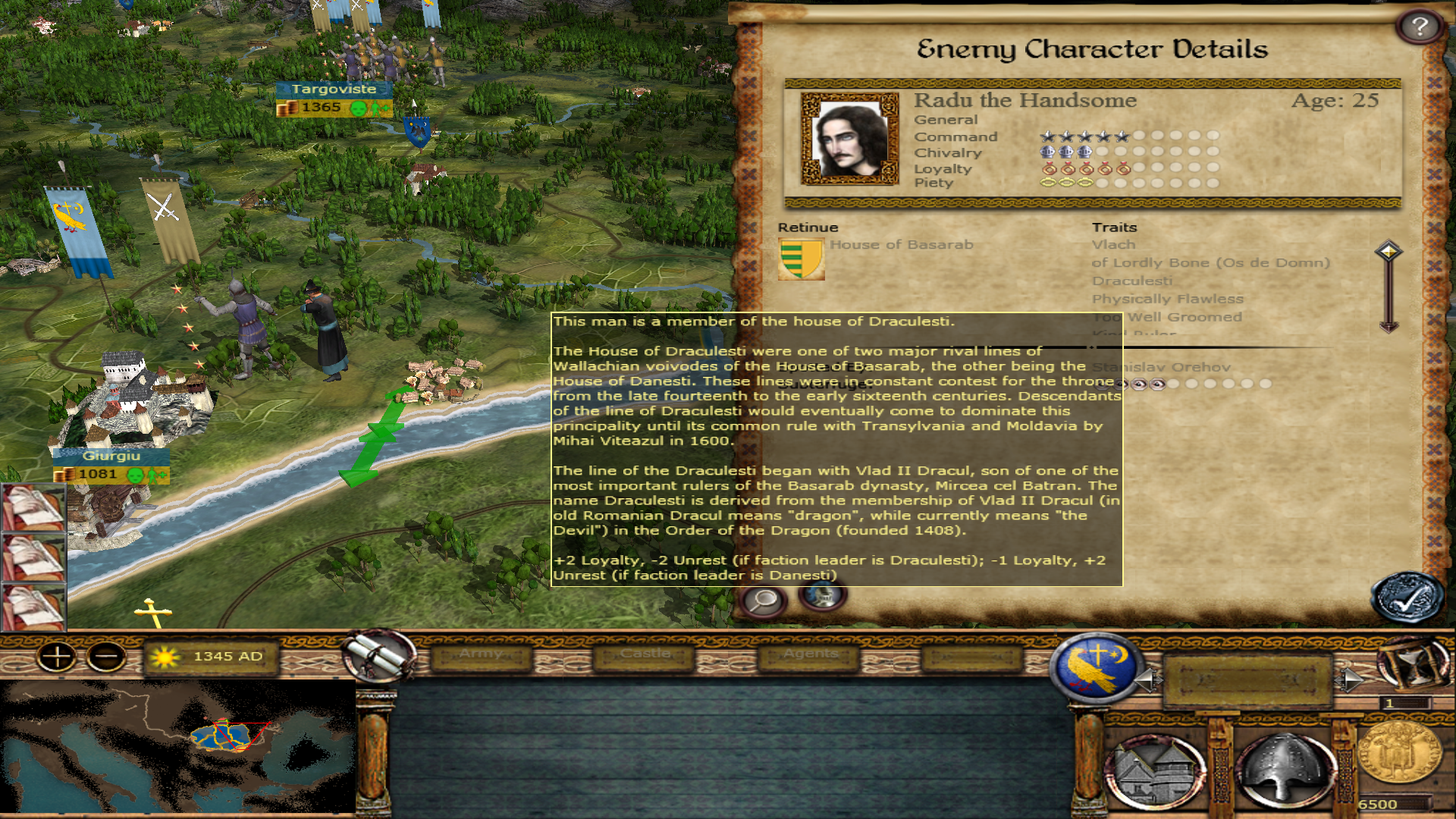 My Lord, another pretender is making a claim to the Wallachian throne! Basarab IV the Younger known as the Little Impaler, the son of Basarab II, and the cousin of Laiota Basarab the Elder is marching on Targoviste. The pretender is a member of the House of Danesti and as such is of princely bone and can press a claim on the Wallachian throne. Aided by rebellious nobles and Hungarian money and mercenaries, the Little Impaler has raised an army and is now threatening the Wallachian capital. This pretender must be defeated and executed as soon as possible. 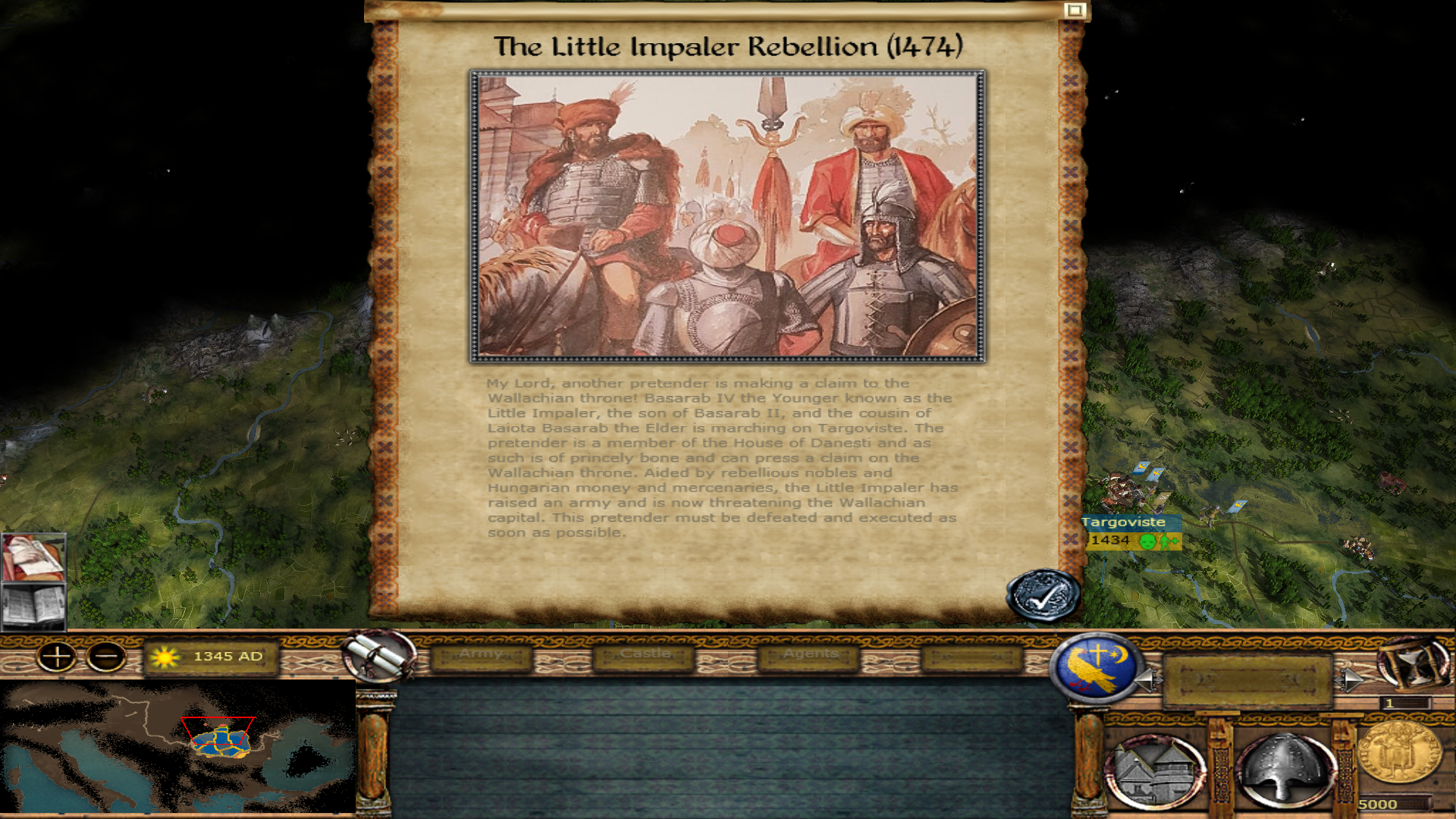 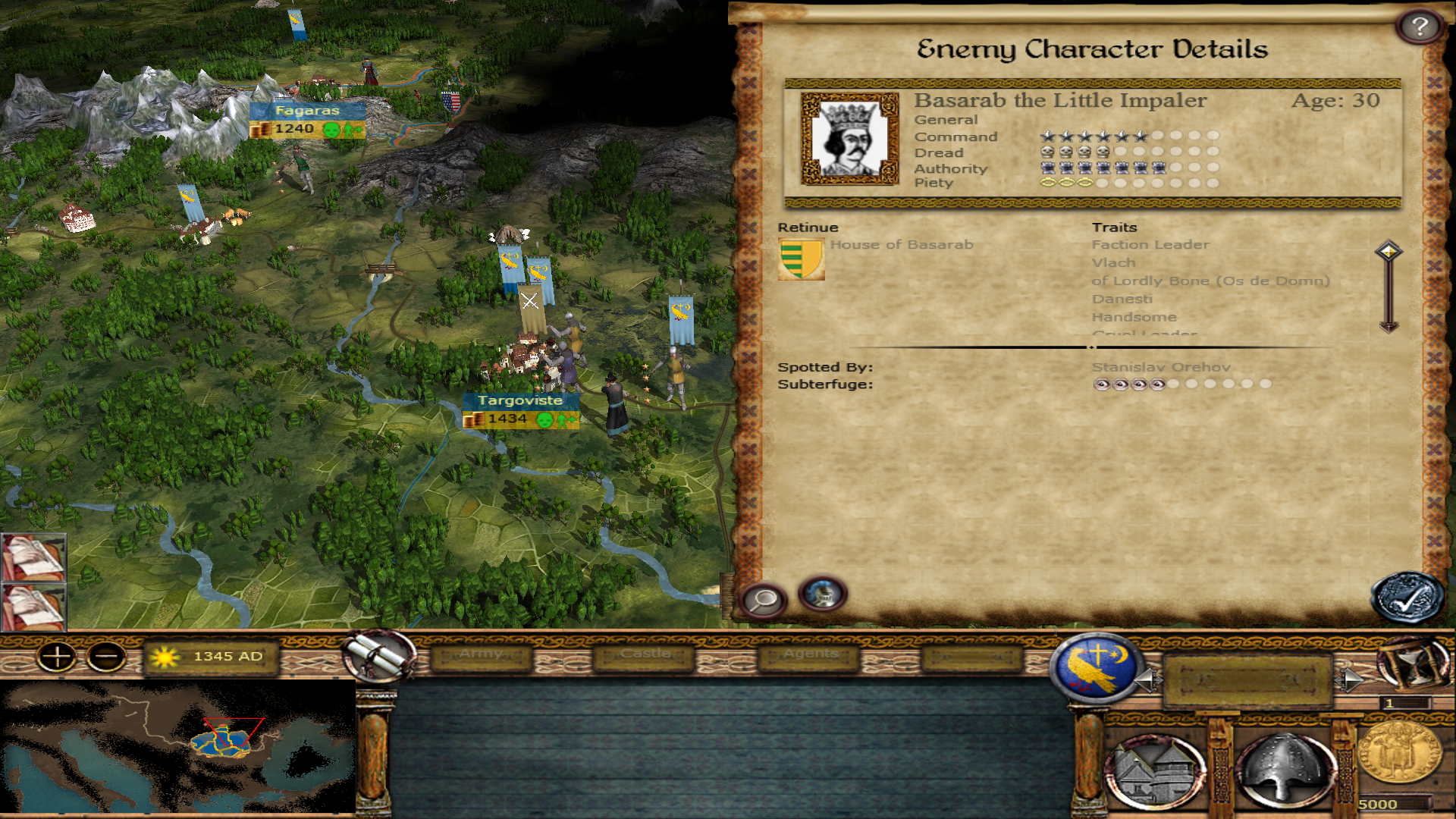 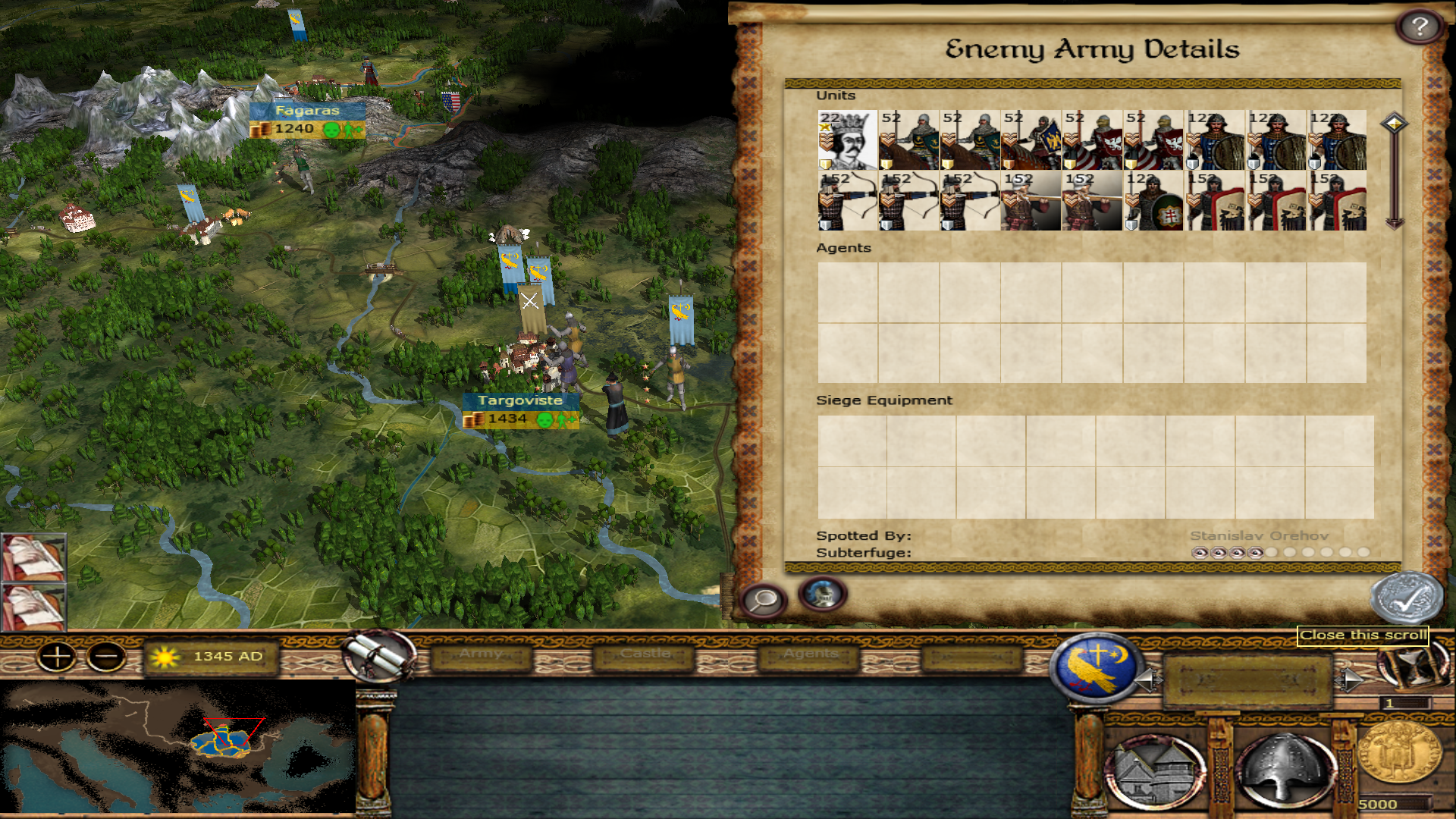 A scion of the Craiovescu family has now come of age. Neagoe Craiovescu is the son of Parvu Craiovescu and later adopted the name of Neagoe Basarab in order to associate himself with the Basarab ruling family.

Historically, Neagoe Basarab V (c.1459 – 15 September 1521) was the Voivode (Prince) of Wallachia between 1512 and 1521. Born into the boyar family of the Craioveşti (his reign marks the climax of the family's political influence) as the son of Parvu Craiovescu or Basarab the Little Impaler (by some theories), Neagoe Basarab, replaced Vlad cel Tânăr after the latter rejected Craioveşti tutelage. He was noted for his abilities and competence.

Neagoe Basarab wrote in Church Slavonic one of the earliest literary works of Wallachia, called "The teachings of Neagoe Basarab to his son Theodosie", where he touches various subjects such as philosophy, diplomacy, morals and ethics. 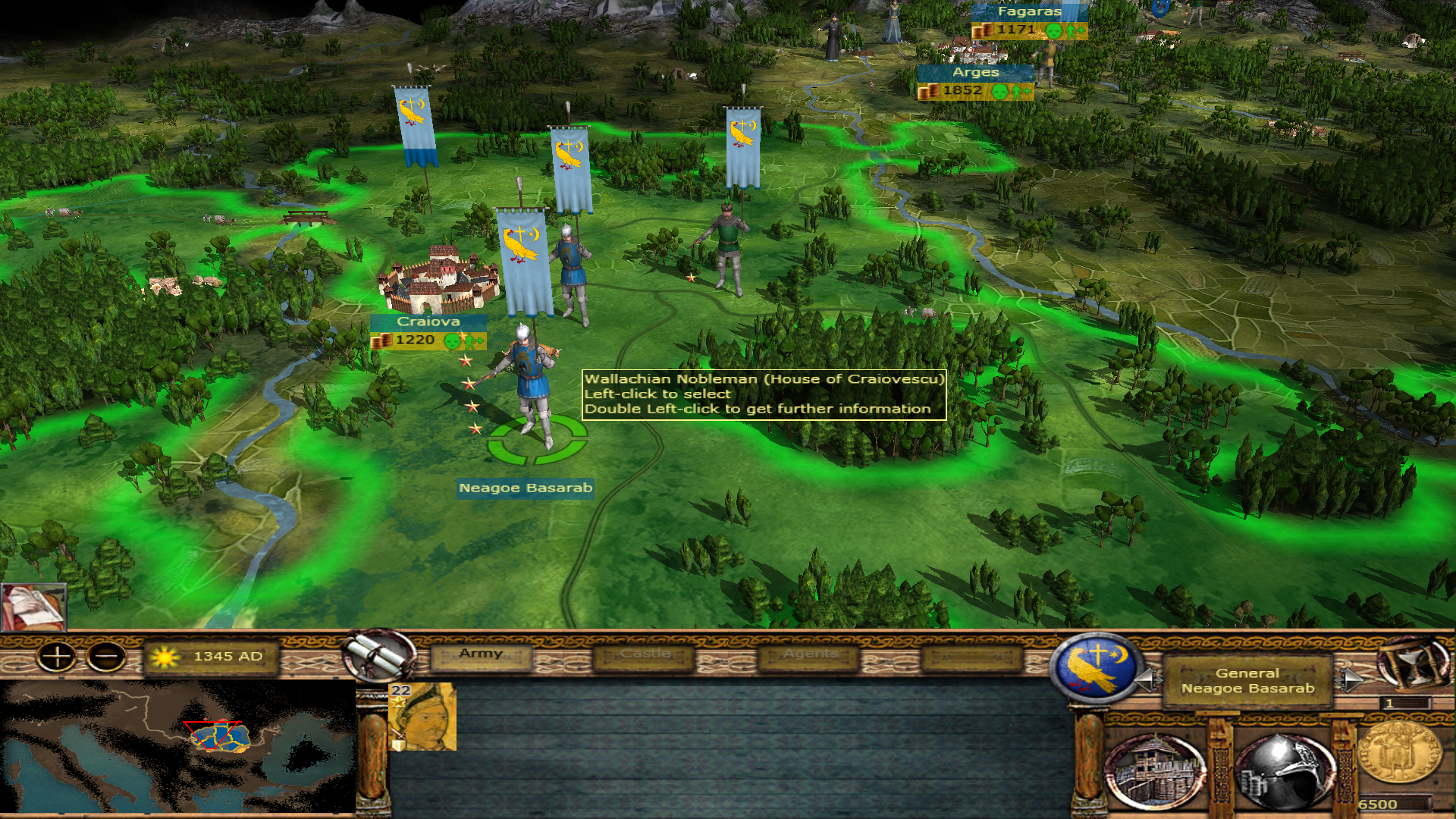 Turkish education system never mentions Radu the handsome nor the all the gay stuff going on in ottoman court.Mehmed the conqueror told as pious,ceaser.

I am pretty sure most education systems don't actually deal with controversial topics.

Anyway, there are rumors that he was involved in some sort of same sex stuff. But we don't know for sure. It might all be made up rumors. The Greek historian Laonikos Chalcondyles is credited with an account in which a drunken Mehmed forced himself on Radu, which resulted in Radu resisting but later succumbing to the Sultan. Also, Mehmet wrote some love poems addressed to other men.