Post news RSS TS:AE in: Something a lil' Different

Shifting our gaze, Civilian Assets are on showcase this week, as well as some of the things that YOU will be able to do with TS:AE's tools.

Tiberian Sun: Asset Expansion isn't just a mod. Hopefully one day it will also be a toolset. The entire goal of TS:AE is to remaster every asset to a replicable standard. Hopefully, in order to create any asset for TS:AE, all a modder will have to do is:

That being said, I'd like to take this week to showcase some of the stuff you can make with TS:AE's render environments in a very quick timeframe. All of these assets took less than a few hours to make, and are by no means the only possibilities. Generally speaking, I have expanded upon an asset already in the game so that it "fits" in the world and doesn't stick out like a sore thumb.

First, we have the Port-A-Shack and Port-A-Shack deluxe. I did doll them up a bit compared to vanilla TS, but the change is subtle. 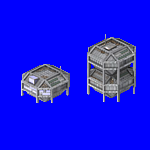 These buildings are very common and I assume they were meant to be houses of some sort. However, I have taken the idea of them being prefabricated modular buildings and made more and larger buildings based on that idea.

Here are three quickly strewn together ideas that fit with these buildings. 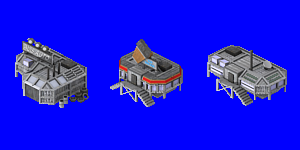 From left to right we have an automobile garage, a coffee shop, and an middle class home, all based around the aesthetics of the Port-A-Shack.

As a second example, here are the Subterranean Dwellings that are found in the map. 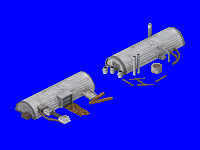 To me, I thought they looked like Quonset huts, and have expanded them with that idea in mind. 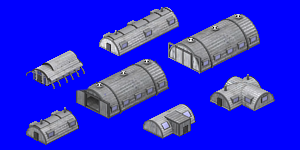 Just piecing and resizing certain assets together were the only techniques used to create these buildings. As the saying goes, the only limit is your imagination.

Towards that end, I've also been working on Doodads (bits, or whatever you'd like to call them) that will be of great help in decorating the environment. Expect many many more in the future. 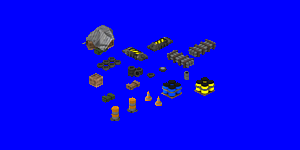 I couldn't let the day's post go by without showing some sort of progress for GDI and Nod, so I decided to appease both and remaster the Tiberium Harvesters 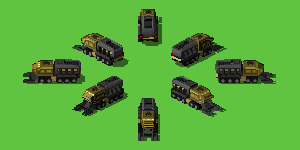 But, as always, there is a lastly leastly, but one that I am particularly excited to share with you all.

I did say every asset, didn't I?

TS:AE will also include a large library of animations to...you know what? How about I just show you some very WIPPY but fully rigged and ready to animated infantry and let them do the talking.

Some people like outlines, some don't, and TS:AE can render infantry in either fashion. 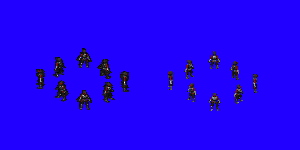 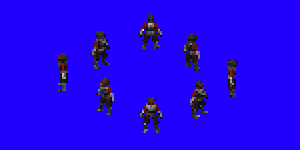 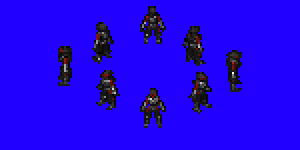 Generic poses aside, these are still somewhat a work in progress, but are nearing completion and are worth sharing. 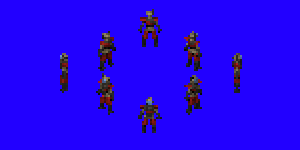 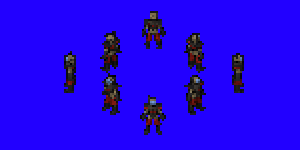 And finally, here are some WIP infantry accessories for GDI. 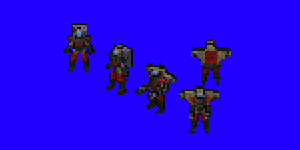 (NOTE: THIS IMAGE IS NOT TO SCALE)

So get ready to strike a pose. 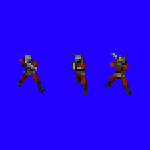 Those are some real nice civilian additions, but those infantry are fantastic. You're really going that extra mile with these outline options.

Based on the ingame scale I think I'd go for the Nod soldier without the outline it just appeals to me more.

I need to change my pants now...

Im not a fan of the infantry myself, but thats probably because I cant even tell which infantry unit its supposed to be (With the exception of the jump jet trooper)...

The harvester looks a bit tall, but maybe thats just me.

The civilian buildings are great, though!

Personally I find them pretty easy to make out, the top five are examples of unarmed basic trooper bodies. Also the height of the harvester looks fine imo.

Im looking again, but I still honestly cant see it. They look like Red Alert 1 pixel art models with 50% more pixels, sadly. Not a fan.

As long as the infantry look like they could realistically fit in a vehicle or building, I'm good; The scale & speed of units on the battlefield should make it feel like a battle of strategy and not just mass production of units that can get to the other opponents base in ~30 seconds at the same time regardless of unit type. I'd like to have to use Chinooks & APCs etc to transport foot-troops. I also think infantry should be invisible to radar & small enough to have enemy players really look at their battlefield screens for infantry ambushes. Although infantry rifles may not do much against heavy armor that's where diversity will be needed. All-in-all love what you've done in the mod!

I think some gifs of them animated (When their animations are finished) would totally be cool, especially since Moddb just increased the size-limit for GIFs.

(When they said Size Limit, do they mean dimensions or memory-size?)

Also, for people that can't tell:

Great job on the civvie buildings, I love how you took the theme and ran with it. Also can't wait to see more of the infantry, looking very nice & detailed, great work man.