This blogpost, I talk about how complicated it is to implement towns as an entity (at least in Olvand).

Hi all, obviously, [my announcement] about switching visual styles was an April Fools joke. From what I read in the comments, nobody fell for it (too bad); instead, people ask for it to be included in the game... what have I done :P. I'm making no promises here, but I agree that it would be nice.

Anyway, what I have really been doing is working on integrating town as a real entity ingame. It's probably best explained with a picture: 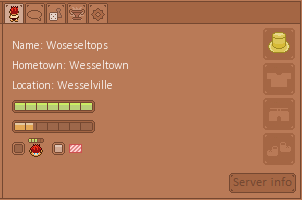 I'd say like 70-80% of it is done; you can do things like found a town, view and change the laws (which at the moment only entails changing the name, and what is its official color), become a citizen of a town, stop being a citizen, etc. Big things that still need to be included for the next update are that [a town's territory expands when you build on the edges], disbanding a town and stopping players from building on patches of land they don't own.

Interestingly, the most important thing I have discovered while implementing this system is that it is INCREDIBLY COMPLICATED, although you hopefully won't notice that as a player. Let me explain. This is the inside of a town hall (which is a bit different from [the one in the current version of the game]).

You interact with the counter for the citizen-related stuff (joining towns, viewing laws), and the desk in the office for the mayor-related stuff (founding towns, changing laws, etc.). However, there are literally dozens of things that should be taken care of. Some examples:

I could go on for hours and hours with stuff like this - it's pretty boring, so don't feel ashamed if you skipped it ;). Things like this kept popping into my head while coding, so I wrote them down because I was afraid to forget important stuff. That list, however, didn't stop growing: for every feature I implemented from the top of the list, I added four things I also shouldn't forget to the bottom of that list. Things got so confused in my head that I almost wanted to bang my head against the wall, but then it hit me: this is so confusing, because I've got three factors interacting. We have the:

And all of these things influence how the game should behave at a certain point. If you every had to work with ANOVA, you know that human brains cannot handle 3-way interactions, so that's why I got so confused. The solution was to write it all down in a spreadsheet; now I've got things under control again. Yay!

Yeah keep up the good work

So it's not counted as an April Fool's joke anymore :P

Is this mcdonalds? Cause I'm lovin this
(cheesy but oh well Good work! ^^)