This trailer showcases a response on the 18th Anniversary of TRON 2.0 to a challenge from TRON 2.0 Lead Programmer Kevin Lambert, and is another preview of Killer App Mod v1.2.

For the 18th Anniversary of TRON 2.0 (released August 26, 2003 in North America) I respond to a challenge from the Lead Programmer of TRON 2.0 (when he was at Monolith Productions), Kevin Lambert.

Kevin asked if anyone could add a concept that was left out of the final game: Placing the player in a claustrophobic Light Cycle maze like the one seen in the original TRON film, with prompts appearing to let the player know when to turn (somewhat like how the game Dragon's Lair prompted the player when to move). 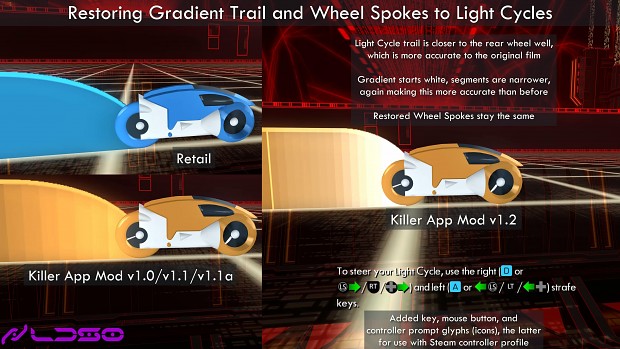 A fourth Killer App Mod v1.2 Single Player fixes trailer is still forthcoming. Consider this to be a "Preview Trailer 10.5". 🙂

Killer App Mod v1.2 will now include what's needed so you can make your own custom maps/levels to prompt the player to turn when riding a Light Cycle. And we'll most likely end up using this concept in User Error 3, LDSO's upcoming follow-up to the previous User Error 1 and 2 Single Player expansions.

One of the mandates of Killer App Mod v1.2 has always been to fix or enhance the Single Player campaign, a goal partly inspired by the similar (in purpose) System Shock 2 Community Patch (SCP).

You can also check out other new features in v1.2, from an earlier news post.

Thanks from the Killer App Mod team, and if you have any questions or comments: visit the LDSO message forum, the TRON fan sites, or leave comments here on ModDB. Do not use the "Send Message" link on ModDB, otherwise your feedback may not be read for a long time.

I just bought a 21x9 monitor. Does Killer App can support such aspect ratio?

I'm working on 21:9 aspect ratio and even other ones, including certain Eyefinity/Surround (aka multi-monitor) configurations, yes. :)

Thank you! Will keep looking here.

Glad to hear the 21:9 support!! I have been looking forward to the new version for a very long time. :)

Thanks for this update!

We are all looking forward to Killer App 1.2!

Yes, the v1.2 update is still being worked on. As soon as I have a test version ready for release, I'll let everyone know.