The objective of the KILLER APP MOD for TRON 2.0 on the PC, is to incorporate elements from TRON 2.0 KILLER APP for the XBOX platform that were never released for the PC version of TRON 2.0. In addition, the KILLER APP MOD bundles other previously released MODS into one. Effectively, allowing the player an even more dynamic gaming experience. New to the latest version of the mod is 16:9 and 16:10 Widescreen support.

A project that can trace its origins back almost five years: the TRON 2.0: Killer App Mod is releasing today.

Also releasing soon is an updated version of the Single Player expansion User Error 2. The new version will now work in widescreen (with the KA Mod installed first), and it fixes some bugs. If you've already played User Error, then the only reason to obtain the new version would be for widescreen support. The gameplay experience is otherwise not significantly different than before.

These fan-made modifications are for the PC game TRON 2.0, released by Buena Vista Interactive (now known as Disney Interactive Studios) and Monolith Productions. (The Killer App Mod will not work on the Mac OSX version of TRON 2.0, or the PC demo version.)

Visit the Killer App Mod and User Error 2 pages on ModDB for further information, screenshots, and download links. And visit the following TRON fan sites for the same information and downloads. 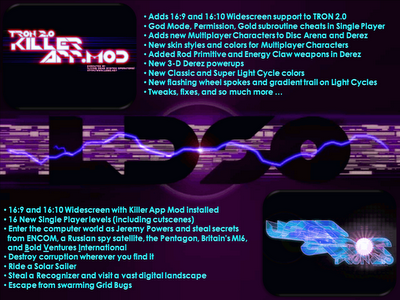 Note that if you have not played TRON 2.0 or User Error 2 before: there are some SPOILERS in the trailer below, so you may not want to watch.


Due to the sheer number of updates that the mod will make to the game, from the most minor to the major: the mod has been released as an Open Beta. This will allow for testing by a broad range of users, to help discover any problems that may crop up. These issues will be dealt with in another future and final version, based on everyone's feedback.


Please leave any comments or feedback on ModDB in the comments section, or the forum of one of the TRON fan sites. Do not use the "Send Message" link on ModDB, otherwise your feedback may not be read for a long time.

Thanks from LDSO and the Killer App Mod team (KA Mod); LDSO and Meatsack (UE2).

nice. hope the new tron game will have a great gamer and mod community like the tron2 had back in the days.

Unfortunately its a Movie-to-Game which usually spells out "BAD" before its even out. I hope I'm wrong though, Tron 2.0 was a great game and it'd be nice to get a follow up.

I've been waiting for this mod for a while, so I'm glad to see it's released. Widescreen support is also a huge feature! I might just have to install Tron 2.0 and blow through it again with this mod. :)

I expected User Error 2 to be a sequil to user error when i saw the name not just wide screen support.

It's actually been referred to as User Error 2 for a long time now. But a lot of people still just call it User Error.