Hi everyone and welcome to the latest update on TREPANG2. The #MakeItSuperHot contest I entered has been postponed to April 25th, so I'm (anxiously) awaiting results on that :) But the good news for you guys is that if you want to win a Radeon 480, you can still tweet for a chance!

Here's the latest screenshots and videos, details are below. 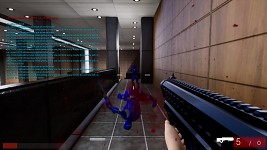 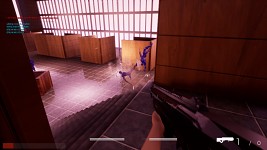 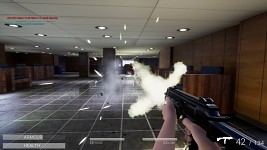 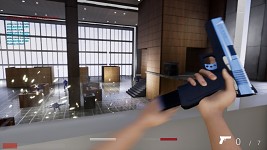 The last few weeks I've mostly focused on tweaks, bug fixes and suggestions from the feedback I received on the demo. But I won't bore you with details on bug fixes, let's get on to the tweaks and new features!

First of all, the slow motion feature has been totally redesigned and is now called "Focus Mode". Not only does it slow down time, it increases your movement speed, accuracy and firing rate for some weapons. Enemy bullet speeds have also been greatly decreased in slow motion to allow dodging.

Originally (as seen in the demo) it gave you an advantage in aiming but nothing else really. Using it in close range almost guaranteed eating a lot of bullets. Now it's much more useful for both shooting and moving.

You also might have noticed the SMG shoots a little faster in slow motion. The SMG has been rebalanced to be more of a bullet hose and less of a precision weapon. This will make it more ideal for mid range encounters so it won't overlap with the assault rifle's long range role.

Projectiles, ragdolls and physics objects now correctly apply damage and physics effects on destructible objectes now - meaning you can now shoot a bad guy into glass, and they'll smash into it and shatter it. (Before, there was just a hack that a big invisible physics ball would spawn when the player or a bullet touched it)

Difficulty settings and other options 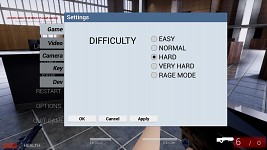 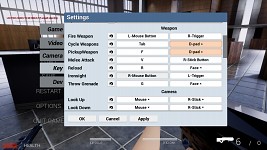 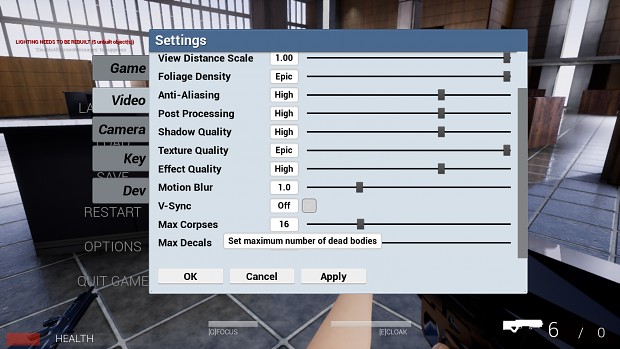 In addition, there are also video settings to tweak for better performance, and all the keys can be rebinded if you don't like the default controls. 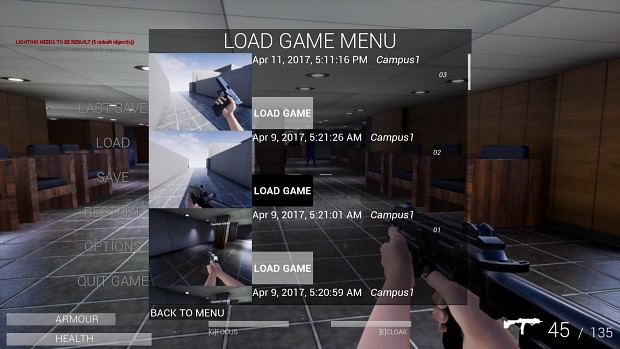 You can now save or load your game at any point now, and there's a new menu for it.

Next update will be about enemies. That includes character models, enemy dialogue and helmets. Follow this game and look out for the next update soon!

Wilson you're awesome. keep up the good work man