GameCareerGuide has published the post-mortem of The Nameless Mod, which they call "one of the most interesting total conversions out there".

GameCareerGuide has published my post-mortem of The Nameless Mod, which they call "one of the most interesting total conversions out there". I structured it in the traditional form of Game Developer post-mortems, and it starts like this:

If we'd known what we were getting ourselves into, we'd have run away screaming. The Nameless Mod for Deus Ex stands out for a couple of reasons. First of all, it's a single-player total conversion, which isn't the easiest or most popular category of modification on the internet. Secondly, it's enormous: The Nameless Mod features over 14 hours of voice-over, the average length of a playthrough is 15 hours, and that's just playing one of two significantly different, mutually exclusive plotlines. Third, and arguably most notably, The Nameless Mod has been finished and released to very favorable reviews.

The project was in development for seven years, two months, and 11 days by an international team of hobbyists who never met each other. It placed enormous demands on communication, leadership, and quality assurance, and to top it all off, it started as that most reviled of genres: forum fan fiction. 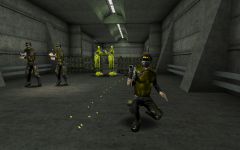 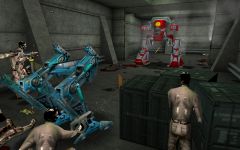 And then I go on to talk about the development process and describe 5 things that went right and 5 things that went wrong, in the usual fashion. It's as honest as I could make it, and I hope people will find it interesting and perhaps even be able to learn something from it or at least gain some inspiration.

The post-mortem may be found here.

Nice reading. Didn't know people hated the idea of using an Internet forum ( fan forum more precisely ) so much. I always liked it from the word go since it had been different than the "gruff space marine" but you are right that people are rather hostile to new ideas.

Isn't it somehow amazing that you developed the game for seven years, I played it for three days and only three months later I have already entirely forgotten what it was all about?

Kind of sad isn't it?

Well with so many people downloading it, and if each person that downloads it plays for 3 days... maybe its not such a bad ratio after-all.

Its a great article. I noticed a spelling mistake or two, but I can't complain. I've learned a lot from these articles.

So its the Duke nukem of mods. Only this is real. BOOM

I've played the mod every day since it came out. And I plan to continue until I've played it for 7 years, two months, and 11 days. It's the very least the mod deserves.

OTP is not responsible for the results of such a marathon ;-)

If that was directed at the TNM team, we released three months ago : )

Im playing this game for, 7 years two months and 11 days. You guys deserve it.

Wow the game will look really bad when you're done ;D

I have not played TNM, but i just want to say: go on and do what you find to do, feel for the critics if their criticism cannot be used to actually improve your work. As the saying goes: the greatest sports stars are found in the recliners, watching the game on television. At least you pulled it through and actually made good on your promise to build a mod.