When an accident rips apart a lone ship on a routine mission, the crew find themselves fighting for survival, and each other in a unique Single Player mod, that's been in the making for the past two years.

Hello everybody, i'm Robin Molde, but i'm better known as "IZaNaGI" one of the original four devs behind Jailbreak: Source. Today i am proud to finally announce my latest project, Titan: XCIX. A single player mod built on Half-Life 2: Episode 2 that focuses on exploration, and problem solving, rather than shooting hordes of enemy's in the face (Which is fun too ... but you know). But enough with the introduction, let's get straight to the good stuff ...


When an accident rips apart a lone ship on a routine mission, the crew find themselves fighting for survival, and each other in a unique Single Player mod, that's been in the making for the past two years. 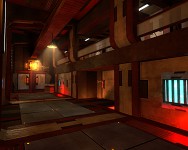 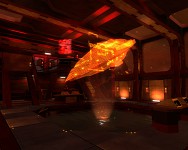 Humanity is at the point of extinction when a terrible accident destroys the majority of life on earth, during what is now known as The First Contact Event. Although official contact had been set with very strict Quarantine rules, unsanctioned contact between the Human populace and Vaedran Trade ships meant that diseases that originated from Vaedra were easily passed to the people of Earth, causing a catastrophic chain of events. 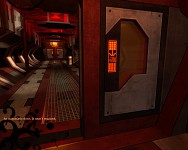 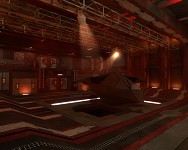 The people of Vaedra (a long lost offshoot of Humanity), racked by guilt, gathers up what's left of Human civilisation and over the space of many years, slowly integrates them into their own society, to give them a better life away from the wastes of Earth.

But life is far from better, hospitality soon turns to indifference, and intolerance, eventually pushing Humans to the outskirts of their new home. There only choice is to work in the jobs nobody else wants, where they can be secluded from the masses. Deep space mining, and working among the Vaedran shipping lanes between the colonies forms the basis of the United Human Remnant (UHR), a group that gives homes to Humans, and Vaedrans alike, among the stars. 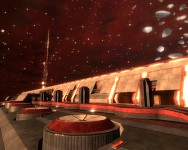 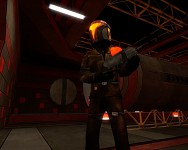 Among these "homes" is Titan: XCIX, a previously decommissioned trade ship, donated to the UHR for the purpose of allowing Humanity to sustain its own trade route. Work aboard Titan is slow, cramped, and often dangerous, but the allowed independence more than makes up for the conditions aboard the ship.

But even on the fringe of space, bad blood boils ... 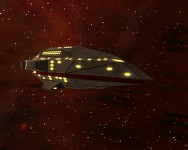 The reason for the reveal now, is because Part One (Of two parts) of the mod has recently reached beta testing, and is almost ready for release ... except for one more planned feature, Voice Acting. So if you're a talented Voice Actor (that's willing to work for free) in the community, and want to help me complete this project, make sure to get in touch with me. There are over twenty roles to be filled from single lines, to full blown parts. Please be aware though, that these are mature roles, and that previous experience is a must.

Update: Most of the bigger roles have now been filled (with only small roles still vacant), but i'm still in need of a female lead. So if your female, and you want to be part of the voice cast, please get in touch!

So there you have it, a huge thanks for taking the time to read this epic wall of text, and watch out for more news in the coming months. Don't forget to hit the track button, and if you are interested i also have a twitter account that i often use to post up to date info on the mods progress (as well as other random junk).

Amazing content, good to see something fresh on the source engine for 2011!

It's not AS, it's still on the OB version.

When was Alien Swarm even mentioned?

This looks damm nice, cant wait till I get to play it.

Nice update, I certainly enjoyed reading through it. I hope you find all the voice actors you need, wich I think you will becouse who would miss out on being a part of such an amazing mod as this? :-)

Excellent work, the video got me very hyped up about release :P . Btw, is that song for the video made for Titan:XCIX or can it be downloaded from somewhere lol?

The song is the "Ezio's Family" song from the Assassins Creed 2: Brotherhood soundtrack.


The mod looks really interesting, but I think I need to see more to be convinced....;) ;)

Thanks :) Though I beg to differ with your opinion; I think this mod has already proven its worth.

Pssst, i'm trying to get him to show us even more :P

Having played it, I can confirm it's even hotter than the trailer makes it sexy. Yes, I meant that sentence.

The wrench needs to be bigger and more futuristic. People like the excitement of a future genre, don't bring it back to earth with such mundane items in such a fantastic setting. Also, when you first see the ship and the other object approaches, it looks like mario graphics. You have an epic sound track and yet when you see the ship in it's entirety you are let down by dated graphics. I'm no 3d artist, but couldn't you offset the dated textures with some great lighting effects? Maybe have some sun glare or something. Also, tell the composer to scale it back with the music, tell him to build more gradually into the crescendo as he currently creates the feeling of great scale a little too early. All you need is little hints and then he can ramp up the vocals and strings when you see the ship, and people will be like wow, **** just got real.

Overall I love you, and I think you guys are doing a fantastic job. I definitely can't wait to see this game come to fruition!

Actually I'd say the regular and mundane items make the futuristic setting more believable, so it should stay. It's not like in the future they'll use wrenches with giant flashing lights and motors, things will still need bolting together.

Remember this is the Source engine, too - it's not Doom 3 or UDK where everything is lit by strong normal maps. Besides, the graphics look pretty decent to me. And the music isn't by a composer for the mod, the whole thing is by one guy. He's used the music from Assasins Creed.

Well then... if it's one guy then I'm blown away. Great job.

Small spanner is perfect for the job. Multi-Barreled Pink-Gnome Shooter is unnecessary. Comprende? I are succinct.

This looks really great! You've found a really good sci-fi style for the ship! And your ideas with it all sounds very interesting.

And its great to see someone doing something different with the source engine than what could be the obvious choice!

This is a must try for me!

This mod looks amazing, my jaw almost literally hit the floor when I watched the video. The Modsentry.com team are all going crazy over how good this looks. We posted a small feature on it here Modsentry.com but can't wait to look at it in more detail and to play it! Good luck with finding voice actors!

Now this is how you announce a mod! Showing us this great looking trailer and knowing that the release isn't too far away.

Unlike most mods where they start by posting super early models with no textures or anything just to get some attention.

Kudos for not doing that. Looking forward to this!

nice :) source never lets you down, so many good mods. tracking!

Looks awesome, can't wait to see where it goes.

Not many mods that have a space setting, maybe this might inspire others. Mod looks excellent.

Izzy, I want your face.

You can't have my face, you strange person :D

Oh my god that is awesome.

Awesome, i recognise some of the mapping from jailbreak
The map with the execution that sucks everyone into space :0

A huge thanks to everybody for there support of this project, it's a huge relief that people are actually interested in this. I've spent the last two years beavering away (mostly) in secret, and as i say the only reason for it's reveal now, is to muster up some voice acting support, and thus far i've had a great response.

More news will come in the months ahead, and hopefully it won't be too long before i can get Part One finished.