In the previous updates we showed you all USA ships which will appear in first release, now we are showing the last addition to US arsenal, the SCV.

In Arizona, at the center of Evans Corporation, a mysterious company which produces mostly military hardware, Admiral Fox and General Ironside were sitting in the conference room with two representatives from Evans, Secretary Jay Edwards and Doctor John Tyler, a chief of the R&D department. The meeting was started by secretary Edwards.

"Greetings, gentlemen! Evans Corporation is very happy to be of assistance in order to help the USA forces to finally end this war with GLA. As you all know, Evans' obligations are far more than just designing weapons. We are eager to help rebuild the Middle East and assist it's people to live in peace again. Being able to help you, distinctive gentlemen..."
"Cut off the ass kissing, Jay," resounded from the door and everyone looked on the man who just entered the conference room " these are just rude military man." Ironside frowned when looking on the newcomer. He knew that man from before, in a military camp he visited back when he was being Colonel at the time.

"So you survived that crash landing in Afghanistan. Seems even death cant hold you for too long, Burbank." Said Ironside as Thomas Max Burbank walked to join secretary Edwards and Dr. Tyler on their side of the table.

Thomas Burbank was a former Ranger Captain in the USA Recon Team Alpha II. Ironside first met him in the military camp Fort Dix. Burbank was part of the Operation Fire Dagger in Northern Afghanistan. During that operation Burbank's transport plane was shot down by the GLA and it was declared that there were no survivors with Burbank considered as MIA. Now, he's the Evans Special Personal Manager (ESPM) for USA operations.

"Yes, it's been long time General. Nice to see you again but I do believe you might have some "outdated" information... But that's another story and with all due respect General, we are here on business" Burbank replied while sitting on his chair beside Edwards. The silence lasted only for a moment when Burbank turned his head to the scientist.

"Shall we commence, Doctor Tyler? Doctor Tyler is a genius in our Nanotechnology Research department, but can't easily speak up in public."
"S-sure, sir. A-as you all k-know, Evans has developed a device.. c-c-capable of.. deploying itself using what we call... the SPAM routine (Standardized Production Assembly Module)." 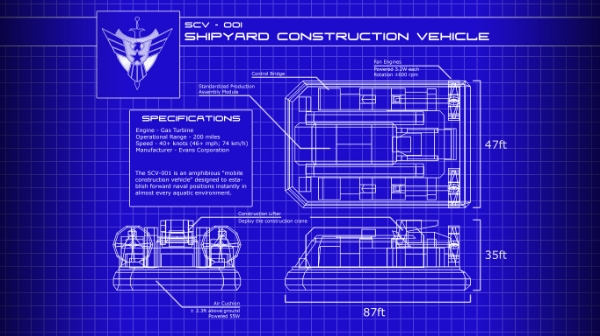 "It c-consists.. in a unit p-packed with the.. materials that are going to be used by the... construction bots. These construction bots were developed in order to.. to assemble the structure. The.. the r-r-r-robots are equipped with..."
"I think that will be enough, Doctor," Interrupted him sleepy Burbank, "we're just a bunch of pragmatic soldiers. Can't you just show how it works? It doesn't matter which metal you used to build those damn things, just let's see them it in action."

The stuttering doctor nodded and grabbed a remote control. "O-okay, if-f you could all just.. take a look at th-the s-screen... I will show a video of it.. t-taken from the- the development during our final testing."


The piece of living information made the old brown eyes of Admiral Fox a bit watery. It was just what he wanted and most importantly what he expected. Ironside admitted it was a spectacular example of technology as he concluded "Evans Corp created a shining example of next generation military technology, which will help the US forces win this 'goddamn war' in the General's words".

"B-by the way... I-it was t-titanium" said surprisingly Doctor Tyler while placing his glasses higher on the nose.
"What???" the four man wondered after the unexpected information.
"Th-The robot.. material. I-it is titanium" said the doctor with a small confidence and amusement in his voice.

Thought we are not working as fast as other mods, we are careful about our every step and working to ensure as less bugs as possible. In the previous updates we showed you all USA ships which will appear in first release, now we are showing the last addition to US arsenal, the SCV.

But before, we will explain you how our navy system works. Unlike in other known naval mods, where either they must be built on shores facing the water, or where they are already placed in specific maps as generic tech structure, we are offering a player-specific construction of the Shipyards, where you can place your shipyard wherever you want. Knowing that Dozers and Workers would not be able to build structures in the water, and creating an "area" near shores where you can build them would be problematic, if not impossible issue, we used an adapted system from Red Alert 3, the Nanocore of Empire of Rising Sun.

Each faction in Tidal Wars will be able to produce Shipyard Construction Vehicle, or SCV for short, from the Command Center. They are available after the Supply Center like War Factories and Airfields. After you build your SCV you can send it to the water plane. There, you will activate the Deploy ability, and the construction of the Shipyard will begin. When the construction is complete, you are ready to build your naval forces as you see fit. Note that SCVs are one-use-only unit, after you deploy it, you will not be able to pack the Shipyard back to SCV. However they still can be refunded just like any other ground buildings.

This method enables one have a more freedom in the construction of the Shipyards. Also, to make the system less problematic for pathfinding of the ships, our models are scaled down from the original models of the US ships in campaign. The ships aren't larger than any of buildable structures, but still remains the largest units in the game. Another thing which is adopted from Red Alert 3. And as ships in Red Alert series, our ships will be turning on the spot. It can look weird, but it is also little helping pathfinding and making weird bugs, such as passing through shores and cliffs while turning.

That is all about the mechanics, now enjoy the render :) 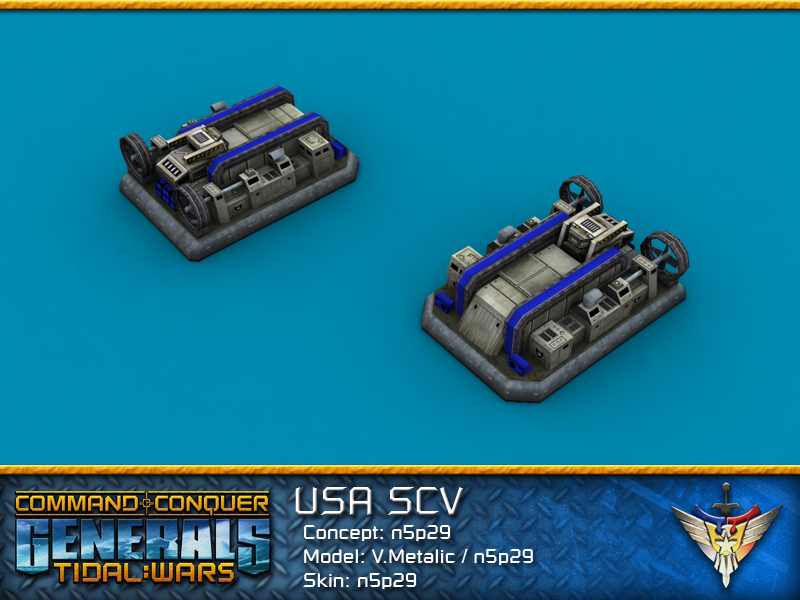 With the plans for "field shipyards" arose one complication. The standard shipyards on the shores were too fragile for bomb attacks. Even a single Bomb Truck attack could have stopped the work in the shipyard for months, and that was unacceptable with the ever-changing combat situation. For this purpose it was decided in US Navy to construct the Shipyards strictly in water without connection to the ground. And to construct them there, the Shipyard Construction Vehicle was designed with the help from Evans Corporation. These hovercrafts are specially outfitted small construction vehicle and packed construction materials to build one shipyard, as it can carry only a limited supply, and must also use some of it's own build.

And we also have an important news that Tidal Wars is now hosted on SWR Productions forum! Thanks to The_Hunter who gave us a place in SWR Forum. We've decided to get hosted there in hope to expand our wings and reach larger audiences. 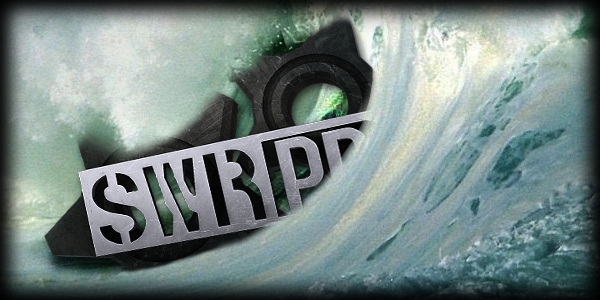 Click the picture above to visit our new forum.

So that's for now and see you in the next update!

now atleast i have a clue on how the mod works