In today's update, we will present you another batch of overhauled GDI vehicles and dont forget Nod: The MCV and Disruptor.

In today's update, we will present you another batch of overhauled GDI vehicles and dont forget Nod: The MCV and Disruptor.

We keep updating the texture's of the vehicle's everyday as we can, today we have another batch of re textured models to show and this time its the GDI and Nod MCV together with the GDI Disruptor. 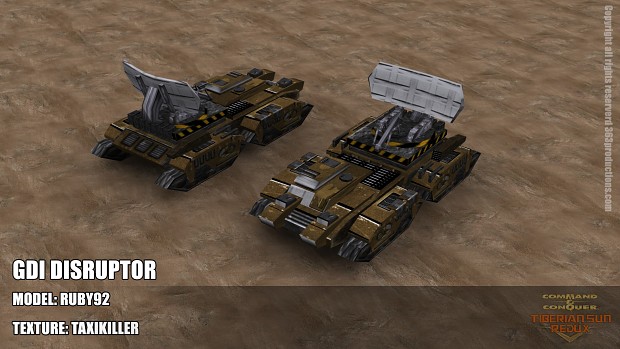 See fullsize on our website or in our gallery on moddb.

For sometime, GDI had been developing a mobile platform capable of projecting sonic energy for its use as a weapon. This eventually led to the creation of the Disruptor with a prototype being developed by the time of the Second Tiberium War. Once Kane had emerged from his supposed death of the First Tiberium War, he charged the Brotherhood of Nod to acquire the crystals used in the Disruptor design. Nod managed to capture these crystals from GDI's Hammerfest Base. However, a task force led by Michael McNeil managed to prevent the crystal from being taken by Nod forces in the following mission.

After the Firestorm Crisis, as with many of GDI's experimental technologies, the production of the Disruptor ceased and it was phased out of the assembly line as a military vehicle. However, many of the elements of the design such as the usage of harmonic resonance was greatly expanded upon and the use of the Disruptor helped pioneer GDI's research into that field of science. This not only let to the development of powerful stationary sonic emitters but also more mobile versions of the technology such as the Shatterers and Zone Shatterers which saw deployment in the Third Tiberium War.

By the Ascension Conflict, Tiberium had proliferated to a level where Sonic weaponry was ineffective against them, leading to the abandonment of Sonic technology altogether. However, GDI continued to field the technology for combat, in the form of the Shockwave hovercraft. 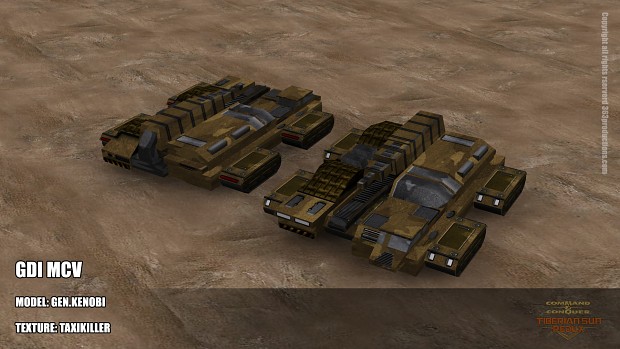 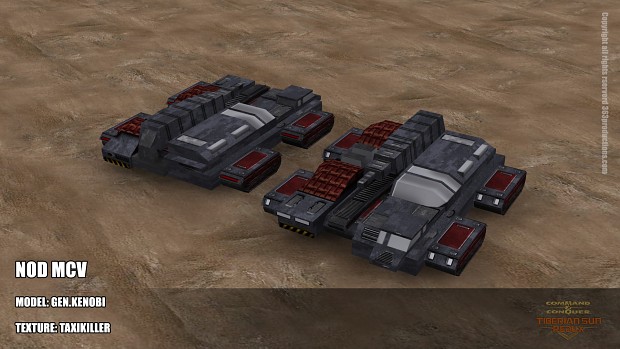 See full size on our website or in our gallery on moddb.

The second variant of the MCV is still used by GDI and Nod to provide portable forward bases. Like the TWI MCV it is heavily armored but slow moving so concentrated tank fire and waves of aerial bombing would make short work of the MCV. A fully veteran battle commander with complete access to their faction's technology level can produce an MCV from their war factory. For GDI however a service depot and technology centre are required to have access to the MCV.

The models stayed the same as they where before only the texture got updated to match the previous textures we showed before.

Dont forget to join us in our official forum page where news is posted earlier then on moddb, and follow is on facebook aswell.

Do you know how hard it is to keep you guys happy ?

And I don't know, how hard it is to keep everybody happy?

its hard, everyone want something but I cant give everyone something, some times you need to be happy with what you get.

But I do my best to satisfy the lust for everybody.

We "Keep it coming" there is no reason to stop this project so far, unless I get married and children then I have to give them my first priority :P.