In the news update number 18 we are going to talk what we are currently doing with Tiberian Sun Redux.

We all see that I'm remaking the texture's for the GDI Unit's and some models are getting a visual upgrade as well. Because of visual upgrade the new version 0.75 is getting delayed. I was planning to give you guy's a nice Christmas present but because I decided to remake the texture's I have to wait for next year, yeah I know I suck but deal with it, "You can't always get what you want". Let's start with the what we have so far. 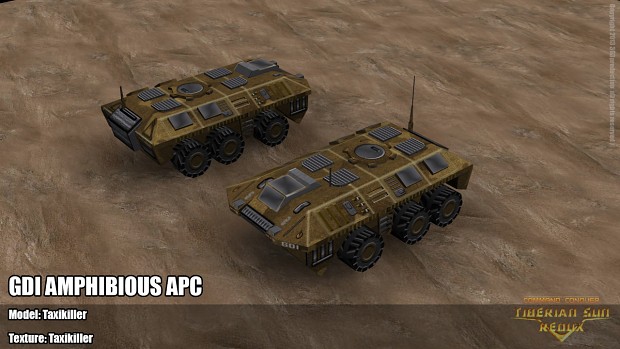 In the Second Tiberium War, GDI's APCs had been completely redesigned. This new generation was a wheeled vehicle, with its machine gun removed to increase speed, especially over water. Although unable to fire at enemy ground units, the APC still retained its speed, and could travel through water, allowing GDI to quickly move squads of infantry over bodies of water and assault island fortresses, as was the case with Vega. 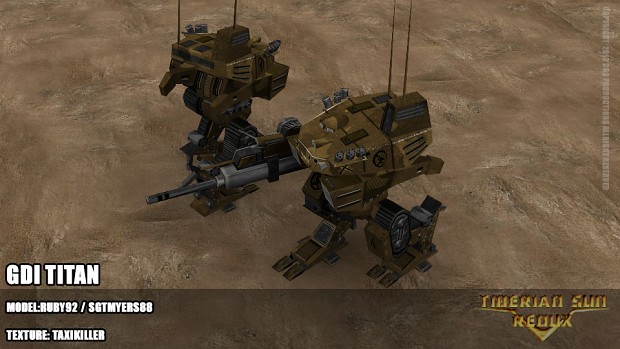 The Titan was developed in the 21st century as an alternative to regular GDI main battle tanks. At the height of concurrent technology, combined with locomotive designs first tested in the X-O Powersuitand a skeletal frame forged from the world's strongest materials, the Titan was an extremely powerful, yet expensive walker.25 feet tall and armed with a 120mm side-mounted cannon, the Titan still suffered from lack of speed and inability to effectively counter infantry units. The faster Wolverines were used for this purpose, although it should be noted that Titans, especially in these large groups, could simply crush infantry under their massive feet. Mass deployment of Titan walkers was almost impossible, especially in an urban setting.The Titan chassis has been used extensively by GDI, and many advanced walkers used either newer versions of the Titan chassis or modified ones. An example of this approach was the Juggernaut.This unit would be very useful in attacking bases, and unlike units with catepillar and wheel chassis, it can crush not only infantries but non-walker ground vehicles. 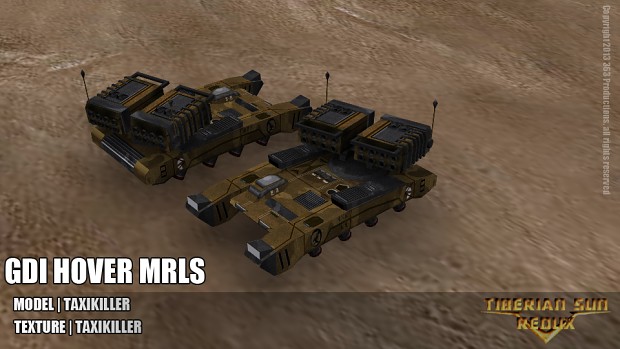 These mobile rocket launcher systems were developed after the First Tiberium War and were designed to replace the aging M270 Multiple Launch Rocket System which had served with distinction during the earlier conflicts against the Brotherhood of Nod. The Hover MLRS had heavier armor than the previous version, although not as much as either the Titan or the Tick Tank. Its main advantage, instead, was from GDI's use of hovertech to propel the MLRS. No longer would the vehicle be forced to remain on land. This unit could also maneuver in calm bodies of water, crossing rivers or even entire oceans if necessary. Furthermore, this means that the Hover MLRS unit was also quite fast, making it an able scout. However, there were also disadvantages with this approach.For one, the advanced Hover drive failed when exposed to the massive charged particle bursts of an ion storm, rendering the unit little more than a missile turret. Should the unit be over water, it would inevitably sink, becoming unrecoverable. Second, the Hover MLRS' missiles were not extremely powerful against most units. Unlike the previous incarnation, the Hover MLRS had little capacity against infantry and only a moderate capacity against vehicles and aircraft. It should be noted, however, that the Hover MLRS units were GDI's only mobile air defense (with the exception of the Mammoth Mk. II, but it wasn't very effective against aircraft to begin with) against most Nod aircraft attacks. 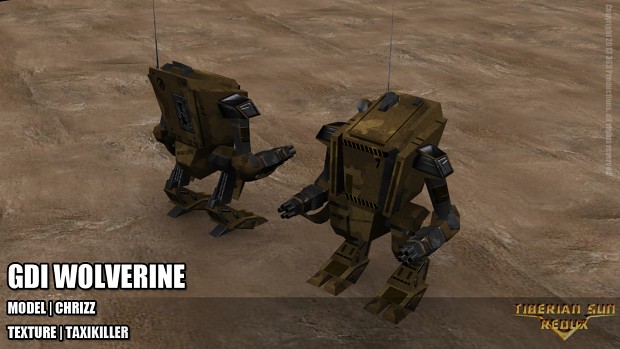 As modern Humvees had more and more difficulty navigating the terrain encountered during the Second Tiberium War, GDI sought out a suitable replacement unit with comparable anti-infantry qualities. The end result of their labor was the Wolverine Mk. I, a single-man mobile walker equipped with heavy caliber gatling guns capable of tearing even the most thickly armored infantry to ribbons.These units, being essentially ride vehicles with mechanized legs replacing wheels, offered their operators a great deal of mobility and speed, even in tiberium heavy environments. Their speed, combined with their powerful weapons, made the Wolverine incredibly lethal to enemy infantry, who would often find themselves chased down and destroyed if they were attacked without anti-vehicle support. On the flip-side, the Wolverine also served as a potent infantry buffing unit for friendly infantry forces; a squad of infantry with a few Wolverines thrown in had a much better chance of surviving an assault then a purely "fleshy" one. The mechanized battlesuits were also useful for supporting heavier GDI walkers, such as the Titan.Like most anti-infantry vehicles, the Wolverine came with a few notable weaknesses. As a speedy vehicle driven by a single operator, the Wolverine boasted comparatively thin armor that offered little protection against heavy ordinance. Even the lightest combat vehicles could do sufficient damage to the Wolverine, with many larger ones having the power to destroy them effortlessly. On top of this, the Wolverine's gatling guns, while deadly to infantry, could do only the most superficial damage to larger vehicles. 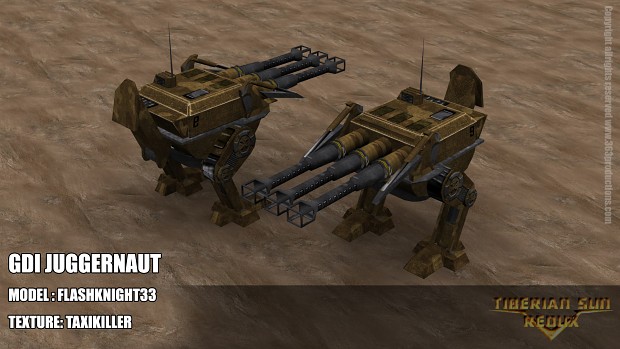 After analyzing field reports that showed grievous losses, the GDIBoard of Directors met to address the issue of the lack of long-range mobile artillery support. The Juggernaut Mk. I combined GDI naval and walker technology by fitting three large-caliber naval guns to a modified Titan Mk. I chassis.[1]Like contemporary Nod self-propelled artillery, the Juggernaut had to deploy stabilizers out of it's rear and become stationary prior to firing. Each of the walker's guns was smaller than the single gun carried by its Nod counterpart, but the larger number of guns allowed the Juggernaut to better saturate a target area. When deployed, the turret can traverse 360 degrees, ensuring all around security. The Juggernaut is notably faster in mobile mode, compared to Nod'sArtillery.Like all walkers of the period, the Juggernaut emerged from the conflict with mixed reviews. GDI found the all-terrain mobility conferred by walkers to be offset by the expense of construction and deployment. However, while other walkers were withdrawn from service, the Juggernaut and its descendants remained essential parts of the arsenal. As indirect combat vehicles GDI decided the all-terrain mobility outweighed the costs. The Juggernaut was replaced by the next generation of Juggernauts and the Behemoths. 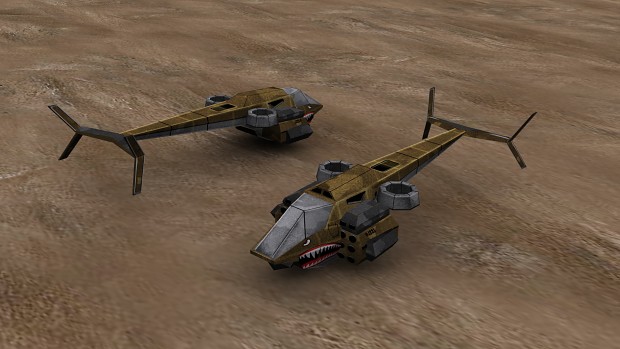 The acronym "Orca" was officially adopted as a codename for the family of aircraft developed on the base of the original ORCA assault craft.By the Second Tiberium War, the original concept was overhauled and redesigned, resulting in the creation of the Orca Fighter, which replaced most of GDI fighter jets.The Fighter itself remains a VTOL based aerial assault vehicle, with revamped and miniaturized engines. The armor is upgraded and the craft is now armed with Hellfire missiles. The chin mounted minigun was removed from the design, as the fighter's main role is engaging armor with guided missiles, and the chaingun proved to be ineffective at killing infantry and unwieldy when used.An additional role for the fighter is providing cover for slower, more vulnerable Orca Bombers, harassing anti-aircraft defenses until the bombers can reach their targets.The Orca Fighter was replaced by the next generation of Orca aircraft. 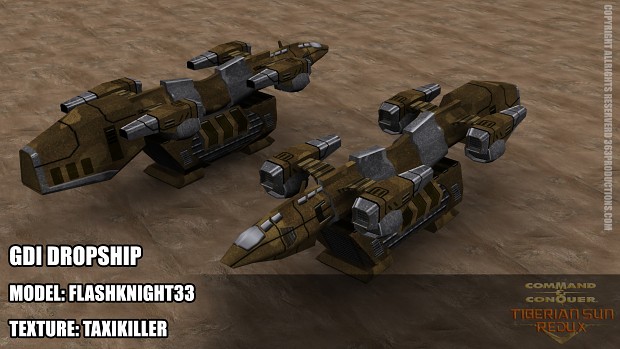 With four powerful engines and a massive hold, the Dropship is the next generation cargo plane. It has full VTOL capability and can fly into a combat zone to deploy substantial GDI forces nearly instantly. In fact, it can even ferry the dreaded Mammoth Mk. II.A number of dropships were equipped with atmospheric entry thermal shields and significantly more powerful engines, allowing them to land on the GDSS Philadelphia. They are known to crash during Ion storms, like all other aircraft.The Dropship was not seen in the Third Tiberium War due to being replaced by the new Ox transports.

Plus we remade our mod logo you can download and view the full size version in your gallery.
That was it for today so you lads next time.

i must say the new textures are amazing, really pushes this mod above and beyond!