The T.O.C.U: With mapping, mutants, and other things beginning with 'M'!

Tiberian Odyssey has survived another manly year of hard work. Members have come and gone, art has been accumulated and the code has been tightened and polished. Tiberian Odyssey has changed a lot since the year began - it stands on its own a lot more with nearly all of Tiberian Sun's code and graphics having been replaced.
Here's a sneak peak at what it mostly looks like now, on YouTube in the form of another trailer.

Although the trailer was intended to be longer and, well, better, Morpher has been a busy guy lately and was only able to finish the first 6 and 1/2 minutes of it in the past few months.

Anyhow, I'm a modder. I can't remember back past last week very well, and it all gets hazy. I'm not paid to think, in fact I'm not paid at all. So instead of going on a nostalgia trip which hurts my brain I'll show off some of the stuff which has been in the works more recently.

Mapping:
The mapping style of Tiberian Odyssey has been the subject of some pretty intense scrutiny as the campaign becomes a much more pressing matter. The Multiplayer map set of TO was quite old, and had much wrong with it. Worst of all, because the old maps are old many no longer function properly with TO's current builds and units.
For purposes of kicking off a more usable map set, "Phoenix Revisited" was commissioned - a map to use all the features of Tiberian Odyssey to its advantage.

This map is the first to make use of the Mutants. The Forgotten were a tiny part of Tiberian Sun, but were intended to have a larger part. In Tiberian Odyssey we've put a fair amount of effort into exploring the mutants as a faction of their own - within the campaign. While the Mutants will never be their own playable side, capturing a Mutant Bunker will give a player access to various units from the Forgotten arsenal.

Mutants:
The mutants were a well developed community by the time of Firestorm, but after Tratos's assassination the Forgotten fragmented into family and geographical groups. These groups continued to use some shared technology in the form of blueprints from the era before Tratos's sudden death but over the intervening years new configurations have been designed by various individual clans. 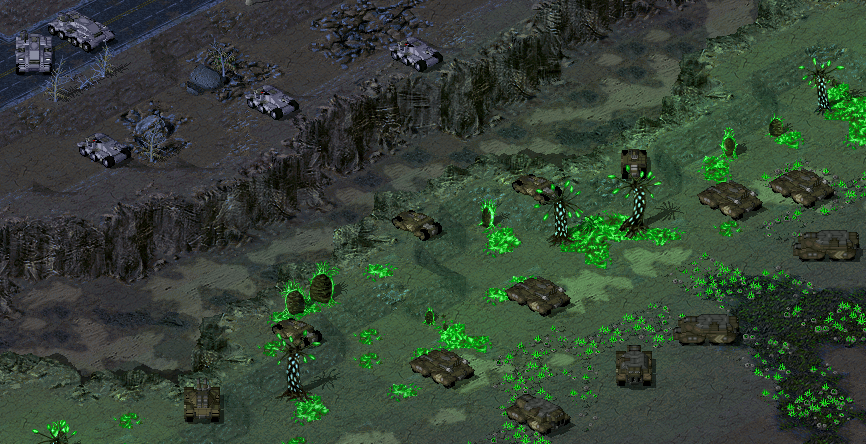 While GDI is happy to ignore the continuing development of the Mutants as a military power as long as the Forgotten do not threaten GDI outposts, settlements, and civilians, the fractured factions within Nod still have much interest in the Forgotten population as a source of manpower and weapons for their return. This interest is likely to lead you in the campaign to reunite the Forgotten as an elite force for the Brotherhood and use them to crush GDI with impunity.

When a mutant bunker is captured by you, you'll be able to build a set of units - these may include infantry and aircraft, but mostly it'll be vehicles. There'll generally be about three vehicles of choice, and they'll all be pretty useful.
Right at the moment, these are the things you'll expect: 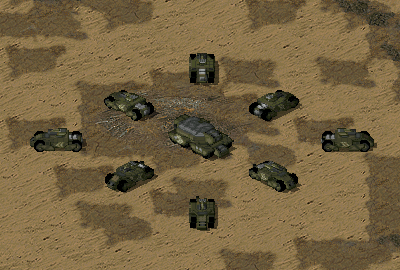 The mutant anti-infantry/scouting unit. This unit is quite well armoured and can take on large groups of infantry with ease. In larger groups they can destroy vehicles too. 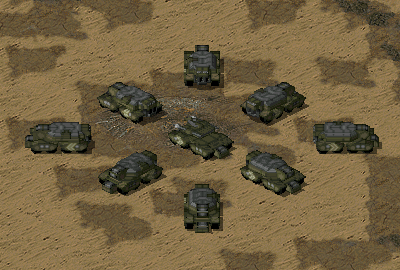 A vehicle capable of soaking up large amounts of damage by itself, good for breaching defences and transporting units though heavy fire. About the same speed as the GDI or Nod APC, but with a significant boost in armour. Not armed, however. 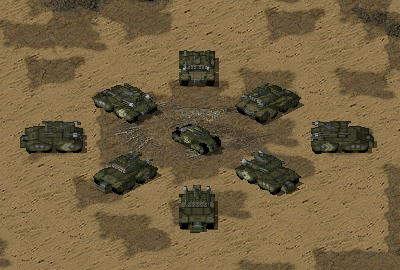 An MLRS which relies on quantity over quality. This vehicle sprays missiles in a wide area in an attempt to turn enemy vehicles and infantry into charred wreckage. It's quite good at it too, despite a lack of armour. 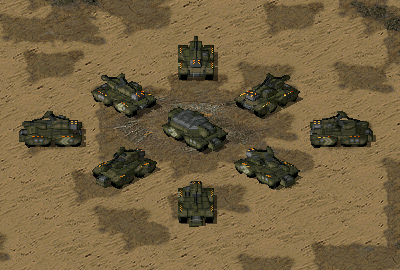 The Crane variant is a large repair vehicle which can patch up allied units on the battlefield. It is unclear at the moment as to whether it will have any further special abilities so if you have any good ideas then we'd be very happy to hear from you. 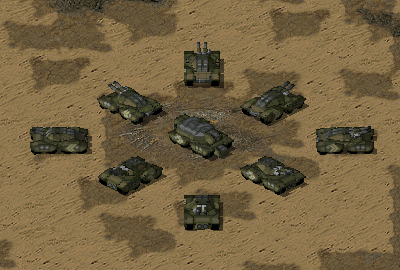 A wheeled tank with fairly destructive firepower. This vehicle is let down by its slowness and cost, and cannot target aircraft. it can, however, level undefended towns and bases with some ease.

In addition to the vehicles, Nod will sometimes be able to build a new aircraft, 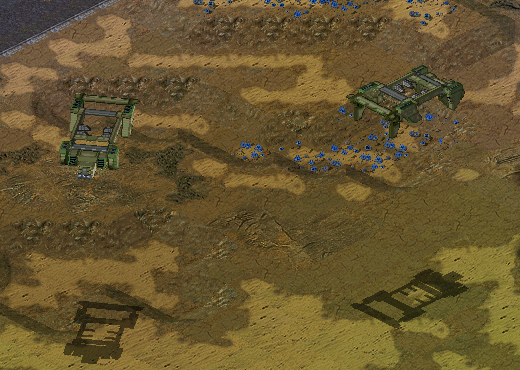 Condor Carryalls are much like the GDI Carryall aside from their lack of armour. They are available to Nod, giving them an easy way to move vehicles across the map.

In truth, we're still coming up with further ideas for Forgotten units so the ones shown here are by no means the whole set. On the other hand, they'll never all appear in the hands of one mutant clan for various reasons and to keep the mutant rag-tag feeling when you first capture a bunker. 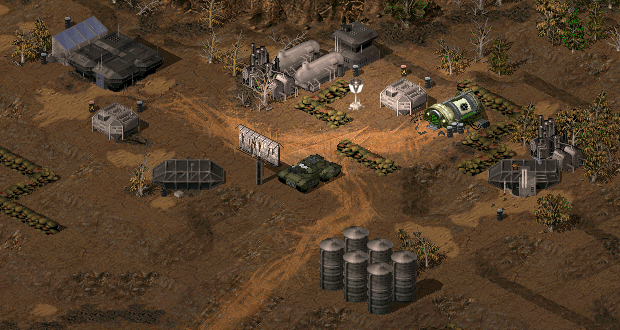 Orac wrote: As the visual artist and architect of the Forgotten weapons of war, the designs were heavily influenced by scrapped designs from the whole Tiberian Saga, and even other places in Tiberian Odyssey. The wheeled tanks should be familiar to owners of The First Decade, which featured a poster of a vehicle which I would dearly have liked to see in C&C3. Now that I have the chance to ressurect the design a bit of it is most obvious in the Draug.
With the unused designs the Mutants feel a lot more unique that they might if they used scrap and salvage as was originally considered, and the use of disgarded ideas adds a tiny little bit of nostalgia for me.

Too much nostalgia. Lets think about the recent past while a little harder instead.

The last thing for this update are a few special little goodies for the campaign.
Machines:
The Campaign has been being worked on, on and off, for a little while now. A few units will make appearances here which would otherwise be impossible, things where the logic can only be simulated by clever scripts and triggers and manipulations of the graphics. For all intents it works in campaign, but the different handling of sides between Multiplayer and Singleplayer maps means that some things will not function in a skirmish. First among these is the beloved Drone.

We're not clear on what they do... I guess they just take pretty pictures.
or rain fire down upon the heads of you enemies. One or the other.
At some points in some missions, these will fly onto the map to reveal regions which were otherwise dark. it will also probably happen the first time a Radar is constructed by GDI.

Hopefully there will be more maps, mutants and other things beginning with M (and other letters of the alphabet) in the coming weeks and months as TO keeps getting more finished. Personally, I'd like to unveil Cabal's units to ModDB.... ...So I'll start that here in case I forget, with an image which has admittedly already appeared on our forums a little while ago. 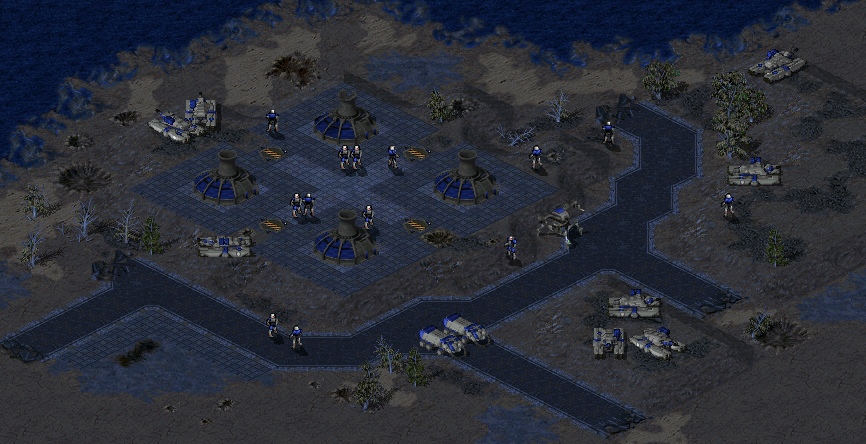 Our forums can be found here, at Project Perfect Mod. If you're interested in helping out, or have any more advanced questions/ideas about the development of TO then you can post on our page here, register and post on the forums, or Private Message myself or Morpher at PPM or right here on ModDB.

The active staff would really like to release something, so keep watching this spot for more news and images as these points of data begin to make a beautiful line.
Everyone have a very happy Christmas, spend it well with your family and thank God for what you've got.
And when you get some nice new game for Christmas, try modding it. That's why we're here.

Merry Christmas, ModDB, from the TO team! 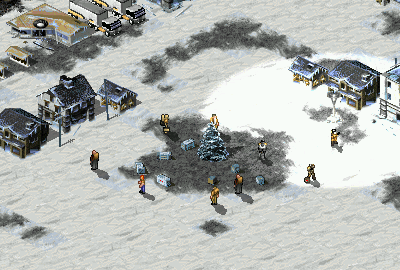 The Prowler remind me of Batmobile, looks very cool, please make one available in black or red and black, cause those color makes it even more badass than it already is! I really love how you make vast improvement in the game content.

Hah, I'd never really thought about the Christopher Nolan-era Batmobile look, but I can see where you get it from... I guess that in campaign it might be interesting to have an alternative colour scheme for a specific clan to make them stand out as more powerful or something.

I'd always thought the Devil's Tongue would be the unit known as 'Batmobile'.

Those mutants are looking mighty fine, the look of their heavy armor gives a hint of brute force tactics.