Hello folks, this is probably the first rather big news update so far, so let's not waste time, shall we? Let's begin with the *real* new things, the Mammoth tank 27. 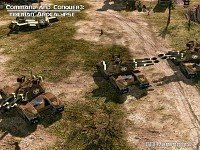 The Mammoth 27, sometimes called Mammoth MK3, is designed to be a supplement for the Mammoth MKII super-heavy walker, it's armaments are composed of two 250mm smooth-bore cannons, and two missile turrets on the rear of the main turret. The cannons use a revolver mechanism to load new shells, each revolver drum contains 4 shells, and each cannon has one drum, allowing 8 shots before having to reload the drums.

Additionally, the M-27 can be upgraded with Electromagnetic Launchers, or Rail-guns as they are commonly called. This upgrade replaced the twin 250mms with quad 150mm Rail-guns, which fire four times and reload. The Armor can be upgraded as well, adding a magnetic layer to the armor and reflective armor plates, thus increasing the resistance to energy weapons fire.

The Mammoth 27 costs 2500 credits, takes 25 seconds to build, and requires the Tech Center before it can be built.

Secondly, the Scorpion tank has got a few overhauls. 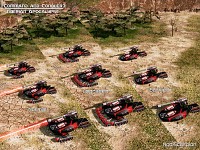 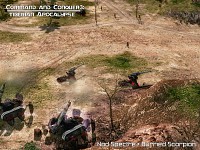 For one, it can be upgraded with earth-movers at the Tech Center allowing it to bury into the ground, in a similar way to the Tick Tank used in the 2nd Tiberium War. This greatly increases its defensive capabilites, reducing damage taken by incoming fire. Also the model itself has been improved too. The Dozer-blades upgrade has been replaced by the earth-movers, and is still purchased at the Tech Center.

Now to the not so new but updated stuffs. Beginning with the Orca Transport. 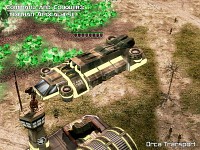 The Orca Transport is considered outdated by critics but beloved by those whom it serves. In active duty since shortly before the 2nd Tiberium War. It has room for 8 soldiers, or 4 wolverines. The Transport is unarmed, and only lightly armored, but faster than most other air transport craft, despite its very un-aerodynamic shape. Newest upgrades include an Ionic shielding, allowing it to stay in the air for a certain time even during Ion storms. It is the first and so far only aircraft with this shielding, beside the Carryall and the V-44 Dropship.

The Orca Transport costs 1200 credits and is built at the airfield. Can be upgraded with Ionic Shielding which make it immune to ion storms. 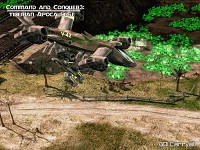 The V-42 Carryall is a new version of the Carryall from the 2030s, it can carry every vehicle currently in existence, beside the Mammoth MKII which is too heavy for its quad lift-jets to handle. In a similar fashion to the Orca Transport, the Orca Carryall can be upgraded with Ionic Shielding, Immunizing it against Ion Storms too. The four gigantic engines are a massive heat source, the Carryall just like the Transport requires air support and the elimination of all Surface-to-Air Missile launchers before going in.

The Orca Carryall is produced at the airfield and requires the Command Center to be built, it costs 1700 credits. And it can be upgraded with Ionic Shielding as well.

And last but not least, we have a few ingame Screenshots: 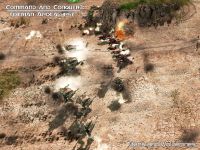 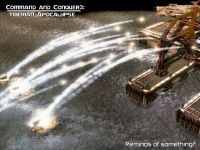 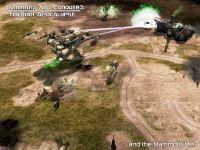 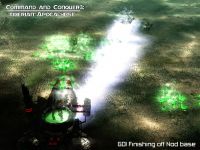 ---
That would be it for today, I hope you like it and stay tuned for more in the next weeks or so :)

Hm I am quite excited for the release :o
Might re-install C&C3 just to play this game.

Keep it up guys, looks great!

When I first played the Alpha of this mod, I thinked to myself "Another fail mod..." but when this new awesome media came out I was like " Dude... I was completly wrong about this mod... "

*drools* I want it now! wonderful work, it's quite stunning.

ok, at first when i played this mod i thought "what the F man this mod sucks bad!!"... until i saw these pictures that lightened up my thoughts.. keep it up guys.. your fans are here when you need 'em..

Well I guess it isn't a carryALL then is it? Huh? Huh?
But, really, can't wait to see what's next.

THIS MOD IS GOING TO BE AWESOME!!!