This requires a fully patched installation of Star Wars: Empire at War: Forces of Corruption. 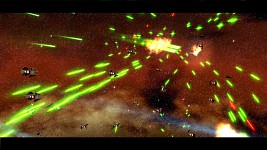 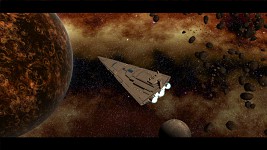 
The mod is released, but we aren't finished just yet. Several of the team have decided we're going to stick around and continue to do whatever we can to improve the mod. This includes fixing bugs, expanding the Empire of the Hand with more units and structures, more skirmish maps, more varied GC scenarios, and general gameplay improvements, so we'll give you a quick look at what's coming in the near future.

If you want to see other units, or have other ideas for the mod, please post them in our discussion board on our forums. The aforementioned freighters, along with the Star Galleon, are going to be used for something else that will be explained later.

This is probably one of the best mods for, EaW FOC. The mod team did a fabulous job!

Quite fun you guys did a really good job with this. Only complaint I have is that you could use some new voice overs as well as the correction of a few of the descriptions for some things

looks great
I realy ike it!

Just a quick question:
do fallen heroes return or are they permanently dead?

If they die, they're dead.

I really like that addition to the game makes it so you actually consider how to use heroes.

This is probably one of the best applications of logic I have ever seen...

When I try to run the setup, it says "Error reading setup initialization file". I tried downloading it again, just incase it was corrupted or something, but it still shows me this message.

Probably one of the best mods I've played, it'd be all the more better if my pc had more memory so it wouldn't lag half the time

I enjoy this mod and everything it stands for

and the bombard ments and bomb runs kill m own tam why????? plz reply

Because its more realistic? Orbital bombardments and bombing runs shouldn't magically not kill your lone unit in the middle of the blast radius..

ok sorry for the multiple blogs and thank you

Ignore the "mod maps" and "don't use" buttons on the GC menu. Petroglyph put them there for some reason, but they only affect skirmish. The reason you may not be able to play some GC maps is because you have the wrong faction selected. Not every faction is in every GC. Please read the descriptions, because the present factions are listed there. The IR and NR are in every GC, but the EotH is only in 3.

However when I go into GC I only have 3 heroes? Is that a problem on my end only, or was that intentionally put into the mod???

Also, if I retreat from a battle my hero dies, even when proper retreat protocols have been followed???

Lokenna : Yes, we do. Are you able to do that? If so please respond with your email.

yeah and my emai is bikerchick1257@aol.com

how do u get the shock stormtrooper??

Hey, is it just me or is there no research facility? Is this supposed to be played on tech level 1? :( I'm confused lol.

hi I sent this text before because I sent it when I was a guest so I wasn't so shore it would except it so anyway I am playing galactic conquest scenario with all the planets in the map, as the imperial remnant and I am near byss and want to build the eclipse(the emperor) but the pentastar alignment is in control of the planet. I can send probe droids but not any ships to attack so I assume I cant build the eclipse... why, is there some kind of mission that I have to complete or what and is byss the right planet to build it on.

hay can please someone awnser my text I need help!!!