A short story of how I push myself to do things I'm not able to do.

Everything I read about game design, game creation, indie game dev tells the same story : finish your game. Finish it even if you have new ideas, even if you're a better programer even if you see awesome screenshots of awesome games a saturday morning... I give you an other advice : do not let friends giving you ideas !

Here's the story of how I changed quite everything in my game...

In the beginning I was planning to create a very basic tactical game... I drawed a bunch of characters, monsters and items with this style :

It was supposed to be a 2D game, without animation and based on a simple job unlocking system. The idea behind the design was to push my creativity by restricting the graphic possibilities : minimal color palette, no outline, 45° angles and no curves.

And I decided to animate my characters with a simple mirror trick. This is where I realized that my design was not right. So I tried to change my style for the animation to be successful. Again, I drawed a lot of characters and some animated sequences. Rounded corners, outlines and no more gradients excepted for weapons. The game mechanics were upgraded in the same time : a complete battle layout with rocks, water, holes and plants, so the AI had to find his path...

A friend told me "Don't you think an isometric view could be really cool ?"

Yes I do ! And I decided to turn my 2D game into a full isometric tactical. For each character I had now to animate each action front and back. Again I drawed... And better I became ! At first, I hand drawed a character with the same proportions as the 2D version and came a whole bunch of characters in perspective. At the same time, I added skills and equipment to my game engine.

A friend told me "Where are the ladies ?"

Excellent question ! We need huntress, witches and priestess ! So I drawed some women shaped for adventure and decided to push my game into a full tactical RPG.

A friend told me "Ladies ? They looks like dudes !"

He was right. Everybody was right. So I decided to stop everything until my collection of job was completed. With every unlocking rule written down "black on white" and an awesome char design.

The men made efforts... 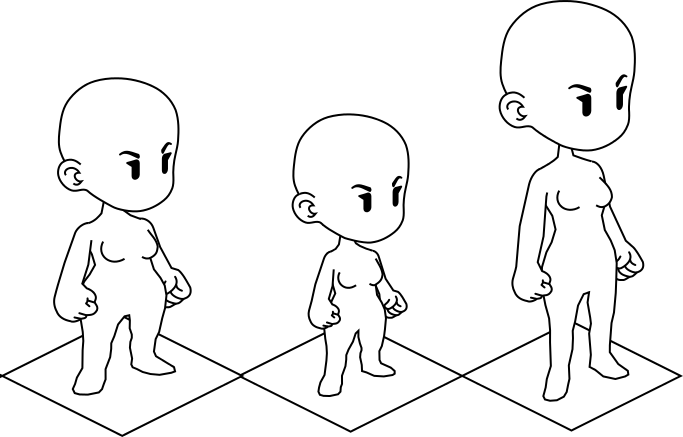 And finally I got my design.

A friend told me "Awesome ! Really... Is the equipment applies to sprites ?"

Won't you sh... If I continue to listen to my friends, I will become a real designer, animator and a good game programer... My project will enventually become a great project. But my game will probably never be finished...

So what do you think ? Feel free to share with me your thought about this and thanks alot for reading.

It's about time you realized this little voice in your head always wanting to push the game _and its release date_ further, is not your friend! ;-)

More seriously, the few first steps actually were great improvements, dragging the game from "this little thing you made in your spare time" to "I actually want to play that!". Finishing your initial project would have been good for your experience, discipline and lots of things, I guess, but the good thing about putting it further is that the reception will be much more

(Sorry.... Was not finished)
...reception will probably be much more encouraging, because with these first improvements, I think it will actually be an awesome game. Not just "hey, look at what zugol did... Nice... OK, where was I?"

Now.. As far as I am concerned, the "duplo" stage was enough. The new graphics are much better, of course, but it was just starting all over... Just to make things prettier. That would have made a good sequel, but now thé first opus just will never exist.

Anyway, this will be awesome. That's what counts. So just don't drop the project!

The duplo isometric design is not thrown away. I will eventually release the game on 3DS and name it "My Cohort" with pretty colors ! :)

I remembered that the visual was so "poor" at the beginning, and you are increased enormously the graphics illusion. I like seeing this iterative development.

Now, this is the time where I can't see techniques but only the magic of your creation.