A post about how randomized theme music works in Hevn.

For this post I thought I'd share a little bit about how the music in Hevn works. Traditionally games have a set soundtrack where each level or scene has an accompanying piece of music for it. There's no shortage of examples out there for both Indie and AAA games. One example that stands out for me is the repeated theme that first plays after leaving the underground shelter in Fallout 3 - when the vastness of the wasteland is presented to you.

Themes help to reinforce or communicate whatever feeling the developer is aiming for in a particular level or scene, whether it be frantic, calm, or otherwise. It's kind of similar to how music works in movies as well. In Hevn, we're trying to explore a slightly different approach where the music is slightly randomized, but in a structured and familiar way. The goal is to make each play session a little more unique and slightly unpredictable.

Why play music at all?

Just as every object in the game has a backstory to some degree (even the UI, main menu, etc), so does the music. To put it briefly, the player's character is able to "hear" music because they are equipped with a neural implant. The implant happens to be in the early phases of development as far as he story goes. (Sorry, no headphones/earplugs out there).

These implants were provided to the player's character to help them make informed decisions throughout the course of their time working/mining (more on this idea in a later post). They were also provided to help the player relax and keep a focussed mind. And as such, the player's character opted in to have their neural implant pre-loaded with "work music" which also happens to double as the theme music. (And don't worry, the player's character's musical tastes happen to fit sci-fi themes somewhat, go figure.) Just as many people listen to music while working today, we figured, why not do the same for the character in the game? But we also wanted to take it a slight step further and tweak how music might be constructed in the future. As with most other games, the music in Hevn works in themes. More specifically, there are themes for each large outdoor area or "quadrant" that the player's character works in. For each theme, there are two or more individual loop-able "tracks" of music. A track can be thought of as a simple audio file, but with an isolated instrument/sound in it. Let's take a look at the tracks for a very simple, ominously titled, "death march" theme. 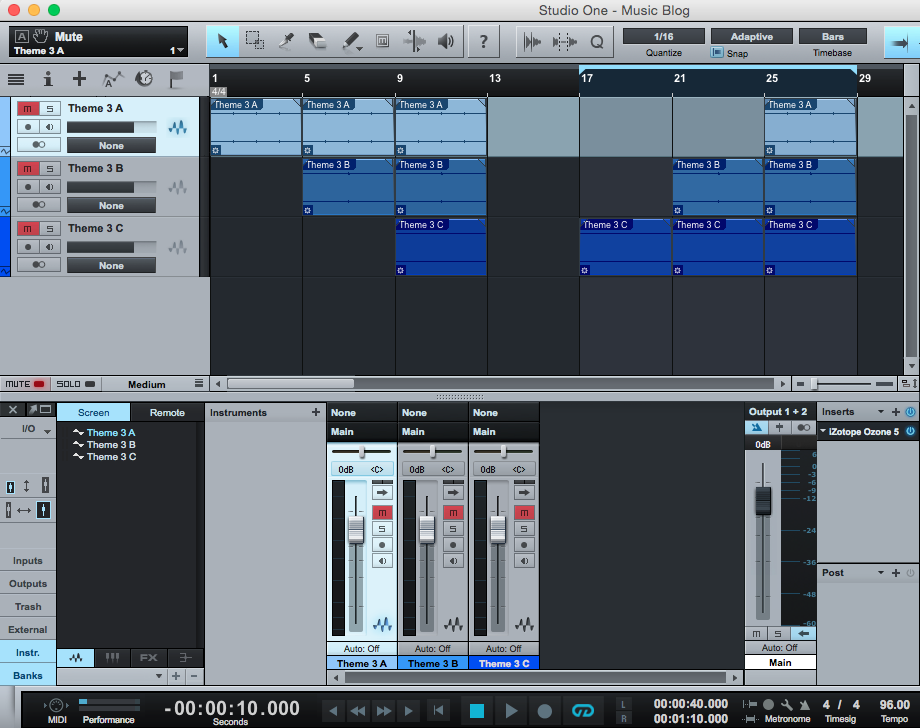 For the "death march" theme, there are currently three tracks:

Let's have a listen to each track separately.

To keep the memory cost down, each track is about 10 seconds long and can be looped. Also, each track is pretty sparse. This is intentional so as not to draw too much attention to it. The aim is to be audible when events in the game occur so an association can be made.

So the real trick comes in during extended play or different play sessions. The game will basically randomize which of the tracks above should play first. Then after a brief period of time, a second random track will play. And in this case, finally the third. The idea is that the theme itself as a whole is somewhat memorable, but because how it starts or ends will vary, it will hopefully trigger a slightly different but still familiar feeling.

Below are two examples with different tracks starting each time: first with the percussion, second with the high synth.

With this approach, adding new themes to the game is relatively easy. Plus there are no limits to how many of them there can be. Hopefully this will bring about some subtle variations to keep things a little more interesting during each play session.

Thanks so much for reading!

P.S. If for some reason the audio files are not playing above, they are also located here: Hevngame.com

Sry bout that, not sure why it's not working. Will try to figure it out.