OrionSlaver brings a brief update on the progress of the upcoming 1.1 patch. You have not been forgotten!

OrionSlaver here with a brief update. Hopefully you all had a great New Years and 2017 has begun on a positive note. Personally I can't remember New Years, but I woke up on January 1 in a place I'd never been, slathered in pesto with someone else's undies on my head. Good times. Incidentally, if your initials are A.M and you're missing a pair of black Calvin Kleins, give me a call.

But on to talking about the mod! Tally-ho!

First of all, I've noticed a number of comments recently from people having trouble installing The Final Frontier. Not a problem - as always we're here to help you out, but it occurs to me that it's been a few posts since I provided a link to a proper installation tutorial. Here's one provided by the illustrious Gul-Dukat:

The Gul provides a step by step guide to TFF installation

I think you'll find that it's a relatively quick and simple process, provided you follow all the steps. Be sure to watch the video through and follow the directions carefully.

And now I'm sure many of you are wondering precisely what's going with the upcoming TFF 1.1 patch that's set to remedy the lingering issues with our recent release. As always we're reluctant to give a firm release date, especially with many of the team taking a well-deserved break, but work on the patch has indeed begun. Many of the smaller issues have already been remedied, such as the strange absence of certain icons, etc., and we're now focusing on ways to improve the overall stability of the mod. We're discussing ways in which to achieve this while preserving the great diversity that is TFF's hallmark, and at the moment our most likely route is to somewhat cull some of the types of moons (planet types being one of the more burdensome loads on the game engine). The Final Frontier is perhaps the most ambitious mod for Sins of a Solar Empire yet and it's possible we pushed the engine a little too far in some respects. Regardless of the path we take, this will all be remedied and 1.1 should be ready soon-ish. I can't be more specific than that, I'm afraid. 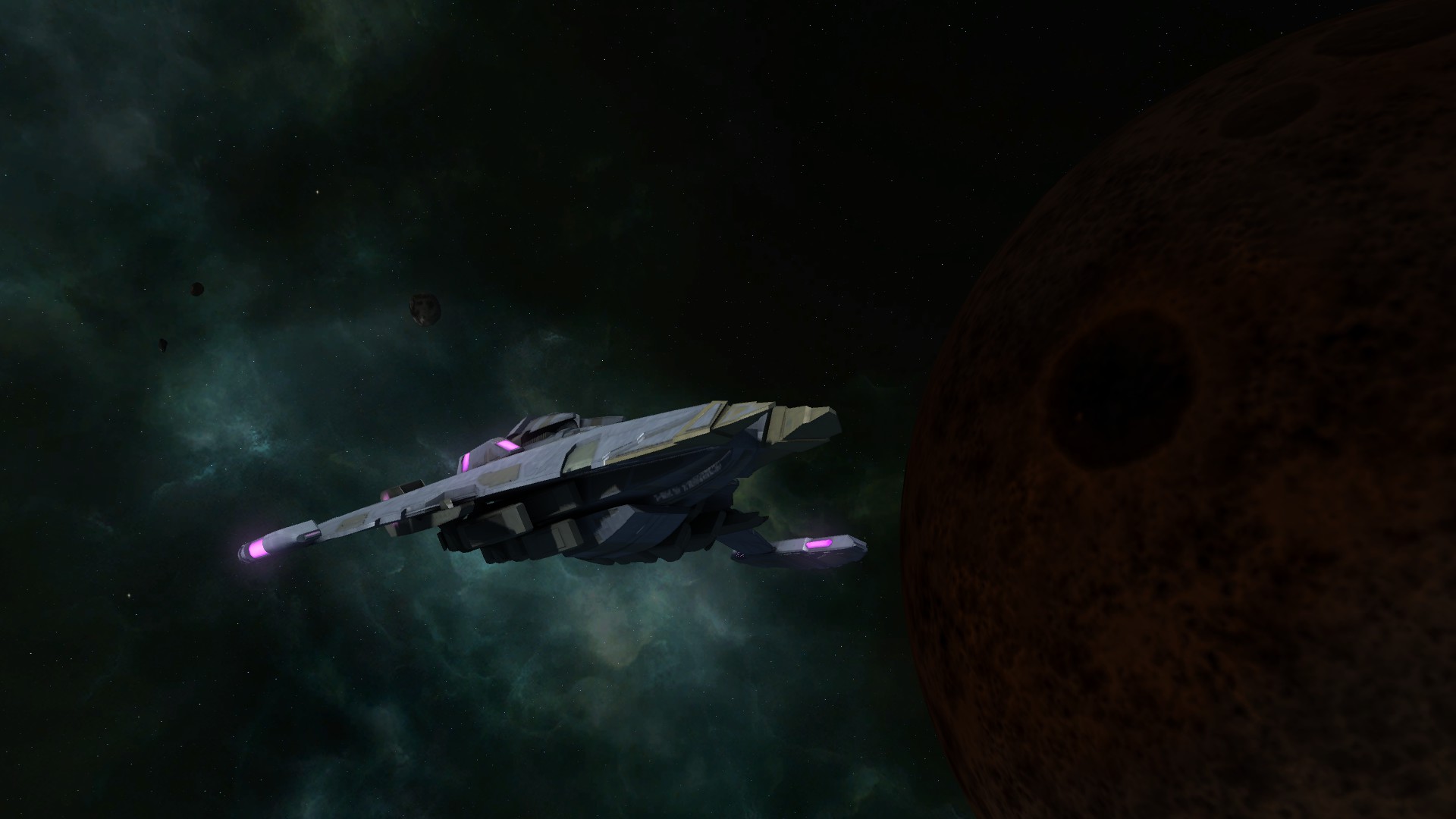 TFF 1.1 will reduce the bugs to the consistency of wet pasta

For now, bear with us and we'll get everything sorted out. Thanks for your ongoing support and we'll be back in the not too distant future, either with another update or with the patch itself.

The mod seemed pretty stable to me. Maybe the removed moons should stay in as an optional minimod?

Odds are you won't even notice any cuts we make. Our only goal is to get it to the point where the game engine no longer strains past its ability to keep running.

I am new to this mod, I downloaded it today and I am very excited to play it. I've watched some lets plays for call to arms and I am struck by the love put in to this, so many thanks. I am having some problems with it however, I have tried playing the tutorials and an opening campaign with the fed and some models seem to be complete (such as the ambassador) and others seem incomplete (smaller frigates come out in block colours of the faction). Additionally, this was true of the norway class when I encountered one and moreover we couldn't damage eachother. The final problem, which unfortunately renders it impossible to play, is that the research panels and menus are partially whited out and incomplete.I'm not massively tech savvy so I'm not sure If I've done something wrong. My machine is 32 bit which I know is unusual and I wondered if that might be causing the issues. From the look of the fact it has been released and people are playing it I can only imagine my issues are not widespread, wear as what I am playing feels 'under construction'. Any help so I can play this gem would be greatly appreciated.

32-bit is indeed the issue as it limits your computer to 4gb ram, which is the amount that sta3 needs to work, the issue is that some of those 4gb ram also needs to be used for windows and other background processes. Long story short: you will need 64-bit windows along with probably atleast 6gb ram to be able to play sta3.

Ill also post the usual fix to this problem, but i doubt it will make a difference since you have a 32-bit pc anyways:

The relevant file is simply called 'Sins of a Solar Empire Rebellion'. This is your Sins.exe. Right click, go into Properties and ensure that the .exe is NOT set to Read Only.

Then go to wherever you're keeping your Armada 3 files, kept by default in your Rebellion 1.85 mods folder located here:

Once LAA is open, browse and select your Sins.exe mentioned above. Tick the box indicating that yes, you want the game to access more than 2GB of memory, and click 'Save'.

I thought this is no longer needed after 1.87?

We'll be making sure this mod is fully compatible with the current version of Sins.

Hey guys, great work with all the mods, i'm loving them. I've been having issues with TFF graphics glitches. The white box issue. I've not had any such issues with CTA, and i'm using the LAA fix. Also i've has the same issues with the 1.87 preview patch. Any ideas? I'm loving your content but it's limiting me massively.

If you're getting the white boxes and you're certain you've got LAA enabled then it's a sign that the engine is reaching its limit. For now I'd recommend playing on smaller maps against fewer enemies until we roll out TFF 1.1.