Describes our new monetary system, our new KotH gameplay mechanic and outlines various new fixes and units including the Aircraft Carrier with F14.

Posted by AntiSocialKindaGuy on Oct 10th, 2010

Last news post, we talked about the village rings that make villages more clear for the player. Today we are going to talk about the other improvements to the communication and the new monetary system. We are also going to discuss a new game mode, the state of the AI and some new naval units. We are on the home stretch now, and most of the work remaining is AI and 2D art related.

For some time, we have wanted to encourage assaults on multiple map locations - this was the purpose of villages. However, villages were few in number and easily defensible due to the fear of damaging the village; as such, we wanted to add more points of contention on maps in order to keep a player's forces spread thin.

To this end, we placed supply points around the map for the CH54 and Supply Trucks to collect. This solved the problem, as well as having a weak point in the supply chain in the collectors; the problem was that the collectors were unreliable and stupid. As such, we decided to move to fixed, capturable locations on the map that provide funds. As such, there are three types, shown below: 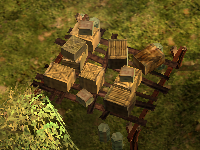 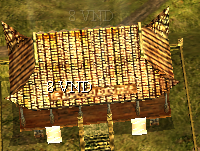 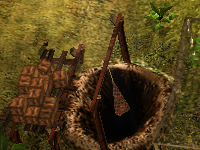 This tier system allows players who have control of the centre of the map not to have a majority of the cash; however, holding those areas is still valuable. While points are rapidly capturable, if a player is unable to take a point they can destroy it, temporarily preventing the enemy from benefiting from the point and thus allowing harassment of points.

As a result of this system, we have removed all supply collectors from the map; the CH45 and Supply Trucks no longer serve that purpose.

Previously, we outlined a system to make it clear who owns a village and whether it is correctly occupied. There was still the problem of finding villages, however, and this was made all the worse with the new, small points.

As such, we introduced two visual systems. The first is visible in the screenshot above of the cash generators; all key structures have large, bright beams of light - this means they are easily visible when moving around the map.

In addition to this, we have added radar "pings" to show the location of villages, and all white structure dots on the minimap have been removed except for money generating structures. Sadly, you cannot see these in the fog, however they are visible once scouted and as they are the only white dots they are reasonably clear.

King of the Hill

We have recently added a new King of the Hill style game mode. The objective of KotH is to hold the centre area for five minutes cumulatively by having 2000 VND worth of troops in a central ring. If the enemy has troops in the area too, then the player cannot control the area until the enemy are removed. The counter does not restart; if a player loses the centre, their counter will remain static.

Any player who does not hold the centre gains continuous cash injections to help them retake it - this allows for frequent exchanging of hands and interesting battles for the centre. Below is a screenshot of our first KotH map, Abandoned:

On top of the ever-tweaking balance changes, we have made the following of note:

- The NVA AI is now complete on all Standard and Bombardment maps. The USA AI is completed for all 4 village maps. These AI are to the new specification of making them slower to advance on Easy and Normal, and therefore easier for new players, as well as handling the new monetary system, balance changes and revised cash amounts.

- We now have the Aircraft Carrier working in-game as a capturable like the Battleship; it launches F14 aircraft to attack a target with missiles. The F14 has animated wings when taking off and landing, and replacements are brought up from the lower deck.

- The Incinerator, an old model from 2006, has been added to the game as a capturable structure similar to the Field Hospital; it makes all vehicles and aircraft 10% cheaper to produce.

- The USA airfield begins as a dirt runway that can only construct the A1 Skyraider; it is then upgradable to tarmac and can then produce jets. In addition, we reduced the size back down to the original four runways for easier placement in tight maps.

- The shellmap has had a slight tweak such that the Battleship now fires towards the camera periodically.

- The NVA OSA missile boat is now in game; this formidable bit of kit fires four missiles per volley and has an anti-infantry machine-gun mounted on the front.

Cool, one of the best mods

Glad to see the whorehouse is staying!
Loving the carrier btw