A quick look at some unused material from Nuclear Catacylsm.

It's been a few months since the release and I was able to get a bit distance from the mod. Most importantly, I'd like to thank you all for the over 1200 downloads and all your great comments and reviews. It was awesome to read how much most of you seem to like the mod! Allthough I realize that the download count is not too high, I think it's not bad for a Crysis mod that was released recently - after all, it's not the newest game anymore. Also, far more important than the download count to me is how much the players liked it, and judging from all your comments and reviews, I think I can be very happy with the outcome.

So once again, thank you guys very much!

The unused material of Nuclear Cataclysm

While I was recently looking through my older development files of Nuclear Cataclysm, I stumbled upon some older versions of the mod, which looked quite differently in some aspects. There are even some bigger, already very detailed parts which didn't make it into the final version. I think some of these parts could be quite interesting, so I decided to post them here as a little follow-up to the release. I know it's quite a long article, but maybe you'll like it!

This is a North Korean radio station, that was originally placed very high in the mountains in the last map (Cataclysm). The idea behind it was that the station acts as the connection between the airfield/missile base at the bottom of the valley and other North Korean forces, so it had to be disabled before the raptor team could advance to the airfield safely, as the base couldn't call for reinforcements anymore. 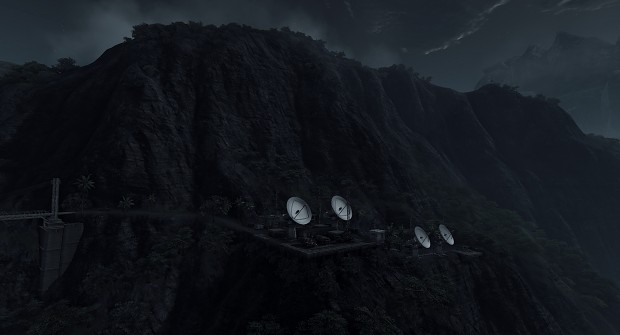 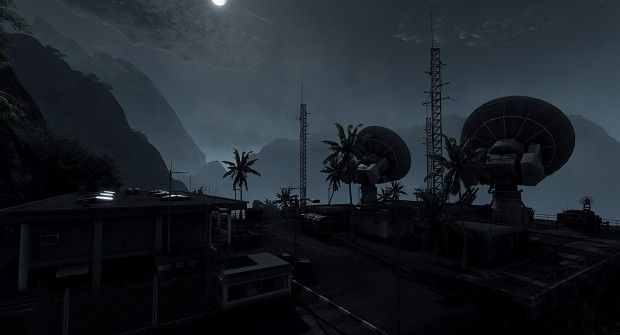 Screenshots from the North Korean radio base.

I planned this as a short action sequence just at the beginning of the map - at first, the player can clear the base of foot soldiers with the BlackHawk's Minigun, and then has to rush into the base and disable the radio connection. However, I decided to cut this part as it became too complicated and I faced some technical difficulties with the Blackhawk sequence. Allthough I really liked the base, I think the intro of the map is now much smoother and overall better than it would have been with the base.

The area was already quite detailed, except from the last "detail layer" with all the small things like decals, small props, etc. But I never erased the terrain modifications - you can still see them in the release version.

This US submarine was supposed to be part of the intro sequence. Before I decided to use an intro movie to explain the background, I had planned to let the player experience it himself. I used the multiplayer submarine assets from Crysis to recreate an ohio class submarine, in which the player could take the role of an US Navy sailor.
The submarine was the one that was used to carry the second 401 prototype out of the US and was then captured by North Korean forces on its way. The player would experience this in a mix of cutscenes and simple tasks, like making his way through the submarine. 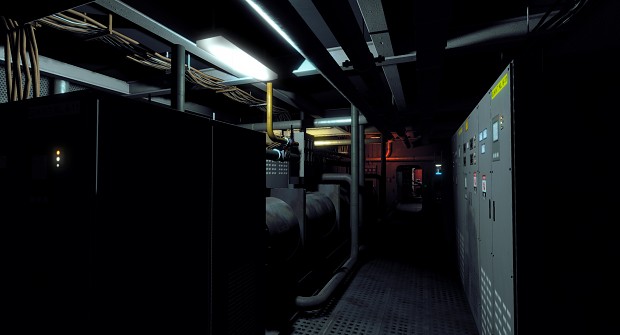 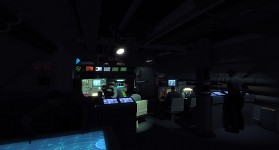 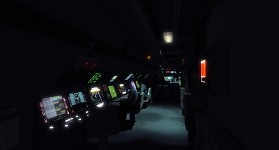 Screenshots from the submarine bridge.

The capture itself would have been quite cinematic and athmospheric: All the lights go out for a short time, leaving the submarine in complete darkness, you can only hear strange sounds coming somewhere from the submarine's hull. When the lights come on again, all systems are failing, but it's noticeable that the submarine is surfacing. Soon, North Korean special forces enter the submarine forcefully and capture the player. He's then flown away in a helicopter, and can see the surfaced submarine as it's being captured, similar to the short scenes I included in the intro movie.

Allthough the submarine interior and some of the cutscenes were already quite finished, I decided to cut it because it would make the entire intro too big. The submarine would have to be placed in an extra map, which would create unnecessary loading times, and some sequences became too complicated. I then decided that an intro movie could explain the entire backstory much easier and almost as athmospheric. But - who knows - maybe we will see the submarine somewhere else! 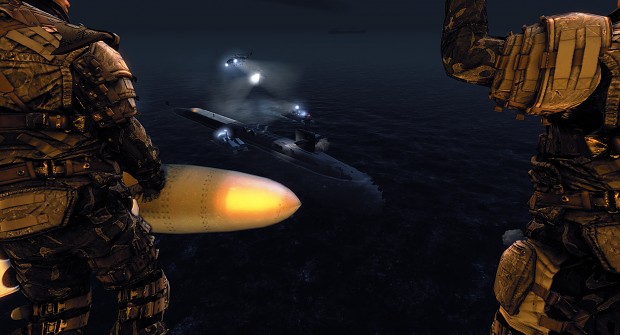 Screenshot from the final capture-cutscene.

Another bigger part that I decided to leave out is the F-35 aircraft system. Some years ago during the development of Nuclear Cataclysm, I started to play around with a quite primitive flying system for the F-35 jet that is used in Crysis. As the basic flying mechanics actually worked quite well, I added more and more features to it. The entire system was based on Flowgraphs, and allowed you to fly the F-35 similar to the Battlefield 3/4 jets with keyboard controls. 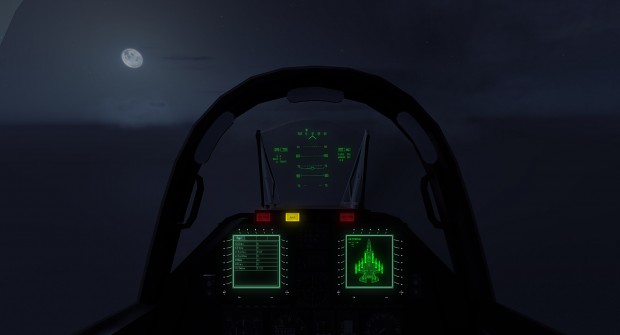 The cockpit view of the F-35 with the custom HUD and multi-function displays.

You could switch between cockpit and 3rd-person view, choose between the Minigun, lock-on AIM-120 AMRAAM air-to-air heetseekers (if I remember correctly) or air-to-ground missiles. I also added a more detailed, F-18-styled cockpit with a HUD and multi-function displays (didn't really like the F-35's touchscreen cockpit :p ) and the modder befubo even created some awesome flash textures for it - the displays and HUD you can see above worked in real-time and displayed speed, height, weapon info, the aircraft's health, etc. There was also a primitive hitbox-based health system, and the player could eject from the plane if it's damaged too much.

Of cource, the system would need some kind of backstory in order to fit in the overall mod: As an air force pilot, the player would have to escort the C-17 ("pegasus one") that carries the Nuclear Emergency Support Team (NEST) to the North Korean missile base. During the mission (probably between the 3rd and 4th map), the player has to defend the C-17 against some enemy jets, enemy anti-air-posts etc. 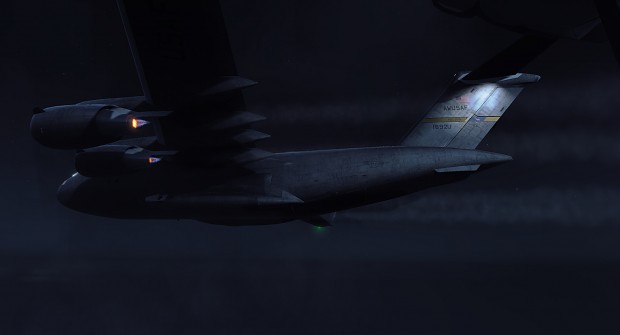 Screenshot from the (quite simple) opening cutscene, showing the C-17.

Sadly, there were quite many (mostly technical) reasons why this system didn't make it into the release version. The most important one was that I couldn't find a way to keep the cockpit camera in place correctly. Depending on the aircraft speed, the Flowgraph wasn't fast enough to update the camera position and the camera lagged horribly. Unfortunately, I and a few other modders I asked couldn't find a good workaround (like using C++ or the vehicle system).
The other big reason was that I would have needed a lot of extra time to create the mission logic - probably several months extra, and I simply didn't want to spend that much more time on it.

These are basically the biggest things of Nuclear Cataclysm that didn't make it into the final mod. I'm not planning to release these assets in any way, but if anyone should be interested to do something with it, send me a text message and we can talk! :)

Allthough all your nice comments are very tempting, I will definitely not start a sequel or a similar project in the future - it was simply too big and took too long. However, some time after the release I began to miss working on the maps and started a small environment map, on which I'm working a bit from time to time. But it's nothing big, maybe I'll show some screenshots or create a mod page for it if I should decide to release it.

But there's another project which I and another modder un-freezed for a little bit - but I don't want to say too much, you will see once it's ready! :)

can you gift me one key for the game?

Thank you for your contribution to this comments section.

Why would he give you a free key, and what makes you think he even has free keys to give away!!??

But enough about that.
1200 downloads is not that much, but for a Crysis mod it is.
A real shame great moddable games get old, because then the download count does go back with big steps.

Wow, so much ditail works here, looks as good as original mod, love it!
Will wait for the new project, yours work is excelent! :)