Good Night, once again, to followers, fans, passers-by and any other assorted viewers of the 9th issue of the UEaW Dev's Blog! It's LTCC again, with some pretty pictures for you, and some idle banter.

Good Night, once again, to followers, fans, passers-by and any other assorted viewers of the 9th issue of the UEaW Dev's Blog! It's LTCC again, with some pretty pictures for you, and some idle banter.

For the last month or so, there have been delays, progress, headaches, but more progress. Personally, I've been occupied until very recently with family issues, trips to Germany and work, but am returning to full activity presently, and in the mean-time the staff have got on admirably on their own. I'm personally buzzing about the opportunity to start my Alpha-Testing and preliminary balancing very soon, and eventually sharing an early build of the mod with a few select beta-testers, who I hope will be suitably impressed with the vast scope (and download time ;)) of UEaW.

Since I'm on the topic of testing, I'll explain how I intend to go about setting up Beta-Testing for UEaW V1. This will, all going well, be in 3 stages:


Beta-1 will, all going well, be starting in a few weeks' time, and will consist of a small team of people who will provide feedback on the very core basics of V1; their copy will be the first Beta draft, so effectively their work will border on Alpha-Testing; hence the small team size and early testing. Their role will mainly be expanding the amount of people who can report in high detail and to impromptu and direct requests of investigation by staff. An extended limb of the team, because when we make and test simultaneously, it means less efficiency at both parts; and extra people will greatly increase the raw data we can gather. This team will not be responsible for bug-finding, since at this stage bugs will be expected en-masse :P. An important note, this small group will be taken from the oldest and most active and loyal members of UEaW's boards that apply; fans who have been with us from the start will at this stage receive absolute priority; a thank-you from us, and it'll help communication too, which will feed into Beta-2 (as I'll detail below; Beta-1 testers will become the Lead Testers of Beta-2/3 testing)

Beta-2 is the more classic Beta-Testing, and will be quite a few weeks after Beta-1, I should imagine. This will be a larger team whose jobs will be primarily geared towards playing the game and reporting back on basic combat and strategic balancing; and scouting out bugs. This team will be lead by the remaining members of Beta-1, who will be the lead Beta-Testers, and responsible for the most direct communication with the team and with me; and who the specific instructions (fewer hopefully at Beta-2, but still present and important) will go via and delegated by; duplication of investigation and collation of results on the same testing from multiple testers will be their responsibility. Additional Tester recruitment to make up the numbers for Beta-2 will be opened here more than for Beta-1, aiming to take 60% of intake from UEaW long-term fans (though these need not be the stalwart ancients we hope to recruit for Beta-1), and 40% fresh from the community to provide differing aspects, whilst still showing our gratitude to our followers.

Beta-3 will be the advanced stages of our Beta-Testing. This is likely to start 2 weeks or less before the public release of V1.0.0, and will likely extend beyond its release to the first patches afterwards. The role of Beta-3 Testing will be to test the advanced and complex functions (especially strategic in GC) of UEaW V1 - economy functions, special features and new concept additions to the game here will be scrutinised, as well as providing a team for anything that occurs, or anything we want to change or add after the release of V1.0.0. This stage will not be taking on new testers unless the circumstances of Beta-2 testers means we need to top our numbers up; which is unlikely. Beta-3 will be formed from the Beta-2 team.

Those wishing to become Beta-1 Testers (I'm sure the people who we feel are eligible and we have previously assured of their priority for such a role know who they are), please navigate here!

I hope you were at least mildly interested in that wall of test, so without further ado, I shall present a healthy array of eye-candy for you. Recently, we've been sorting out orbital structures and starbases - not only will these form your military, research and economic efforts in V1 due to the absence of land, but equally by V2, orbital structures will have far greater roles and diversity alongside their land counterparts, each with their distinctive characteristics leading to choices for the player. However, I digress!

We have much to show off, firstly, Evilbob's lovely Old Republic Station (pictured here as the fifth iteration, the 'level 5' version of this starbase; fully upgraded... Full resolution - warning, high-res - can be found here: Media.moddb.com ): 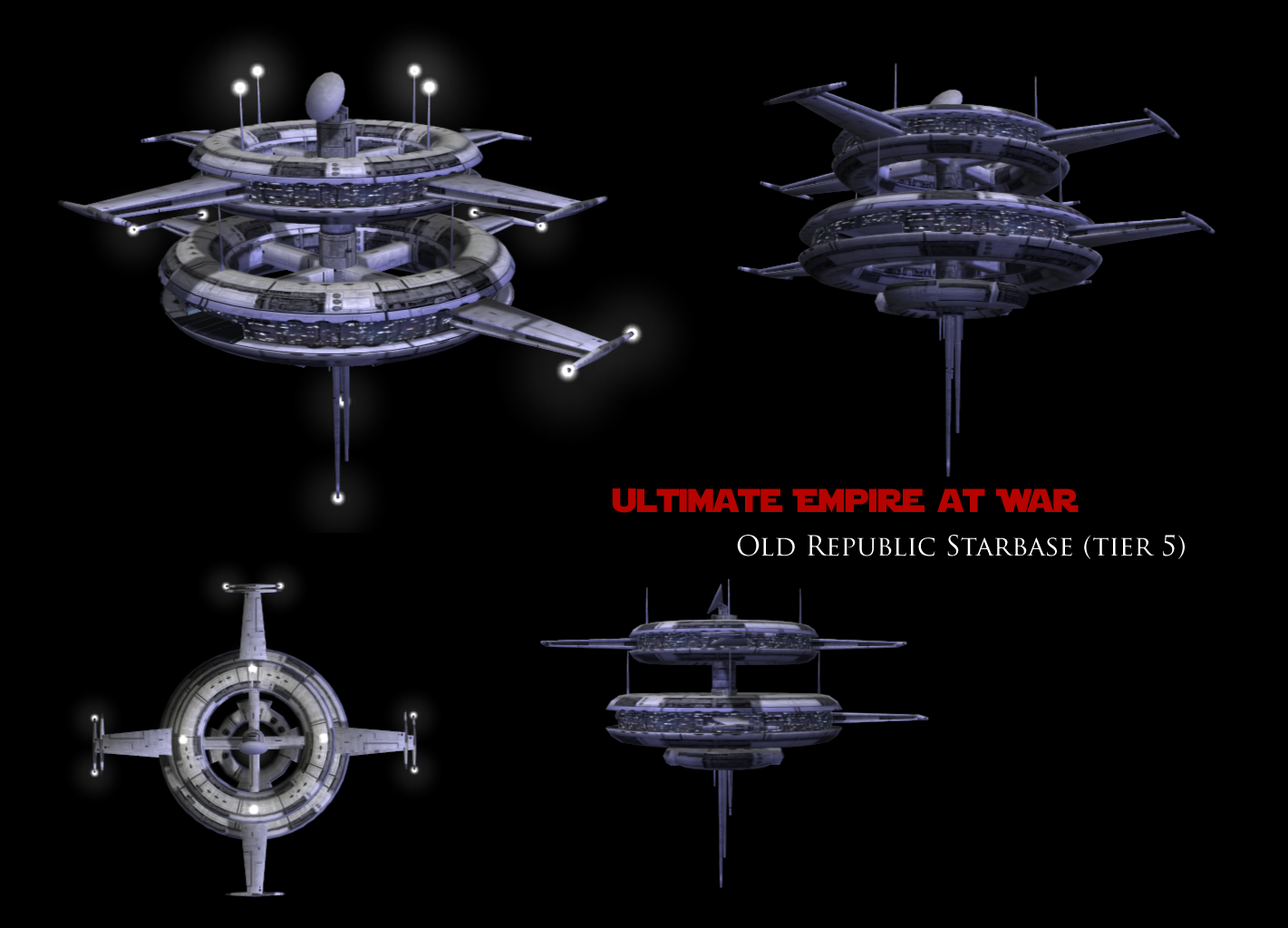 Since there is no canon example we could use, this was the product of looking at both Old Republic design influences (which are extremely well represented in the model, or so I feel), as well as influence in starbase-design drawn from other sci-fis to match the style and provide artistic inspiration.

Evilbob has been busy with many other orbital structures; and there are many, many more beautiful and intricate ones than the one that will follow, but that's exactly why I'm withholding them - they are major parts of the game, and will provide a pleasant surprise on release. Below is one of the replacements for the bog-standard, over-sized and removed and re-made defence satellites that one could build in tactical combat in vanilla: 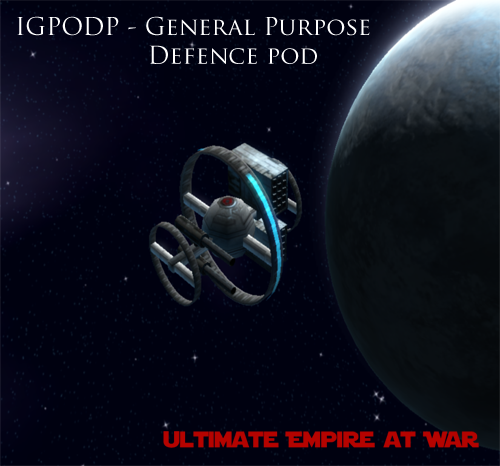 The initials 'IGPODP' stand for 'Independent General Purpose Orbital Defensive Pod' - not a binding name, but a description. The player won't be able to build these in tactical combat (except in skirmish games), but rather must invest in networks of such defences just as one would with any other defences, in GC. This model mounts a double heavy laser cannon and two rocket pods, and when deployed in networks in orbit provides light fire support across the defensive area; General Purpose as it provides a balance between anti-starfighter and rocket-based basic anti-armour capability.

Finally, my contribution are the Sith Empire Starbases - I've compiled them into an animated GIF showing how it develops as you build it! Yet to be skinned, this is a WIP, but I hope its design is appreciated nonetheless:

Until next time - all the best.

Everything looks Amazing, good work and I hope to see it out soon.

thanks for the teams great work on this mod :)

looks great!!
keep on the work

Can't wait Looks great. When do you release, it start of September or what!!!!

It's looking like it'll be the end of September at the moment.