This update includes background information on Zeitgeist's story, cast, gameplay and technology, as well as a Design Document and many images from a 'brand new' location.

As promised, this update is coming a week after the last one, and - also, as promised - includes a design document for the community.

Well, so far, the development of Zeitgeist and our news & update releases had a focus on music, visuals and illustrations of the artistic direction the game has taken. We did mention game play aspects and even released a synopsis before, but we do now understand that most people don't like reading through dozens of news postings only to find a rather important part of the game hidden somewhere in the archived updates.

This has led us to the idea of creating a small, compact and always available "design document\" (a .PDF, actually). In this document, you'll find answers to many questions, although it may also encourage you to think of new ones. In any case, we are looking forward to lots of motivating feedback, harsh criticism and persistent questioning! ;-) 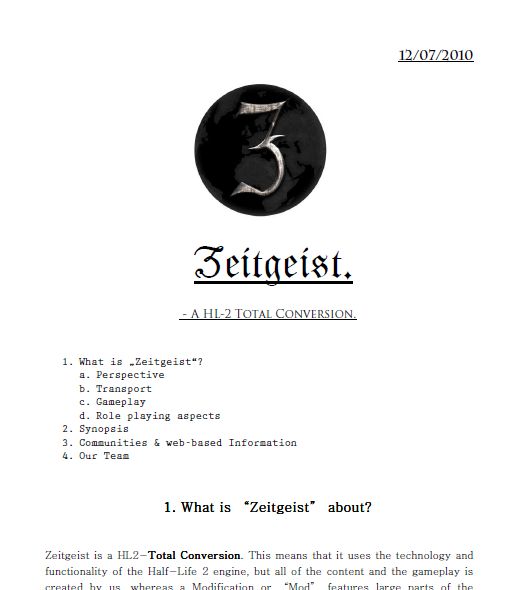 We actually planned to publish the first in-game movement footage along with this update, but due to some unexpected and less than joyful events in our real lives, we will be forced to delay that into the next update. It'll be worth it, though, so we hope you're all going to be patient with us.

Until then, please allow us to show to you a number of images from the third "Zeitgeist setting" following London and Venice: continental Europe, namely Stuttgart, Germany, which you might already know from the very first images we posted in 2009.

This city has been a prototype for many of the thoughts behind our story, as it has been home to many crossovers between the modern age and the "good old time", especially in architecture and vehicle construction. Streamlined cars were produced and tested in one of the world's first and largest wind channels, and high-rise steel and concrete buildings with neon signs on them stood next to medieval houses, rennaissance castles and art nouveau residential buildings.

Today, most of those interesting contrasts are gone as a result of the developments during the last century. Quite a lot of photographic material has been preserved, though, a fact which awakened the idea in us to just give it a try and reconstruct as many of the most interesting scenes as possible.

As part of a large-scale mystery story.

With Zeppelins in it. 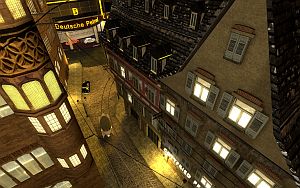 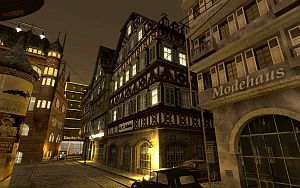 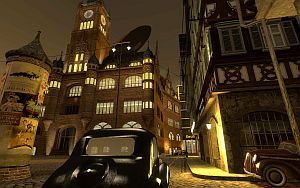 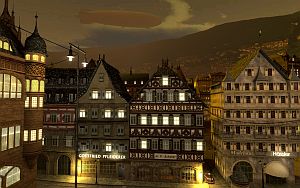 In the next weeks, we'll work some extra shifts, take a couple of photographs and prepare a number of pre-post comparison pictures (assuming that the fictional Zeitgeist time-line counts as a 1930s-status quo!) for those who are interested in these kinds of things. 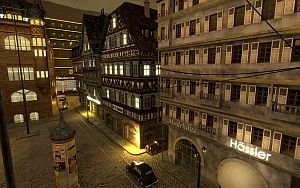 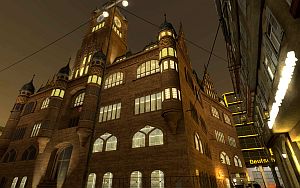 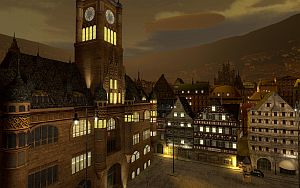 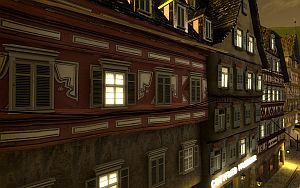 So long, enjoy your Christmas preparations or just have at the cookies and chocolate!

P.S.: By the way - we do appreciate your votes in this year's MotY-competition. ;-)

It's just so.. Beautiful.

I keep repeating it, but that's only because it keeps being that! Time to download the design document, though.

Gameplay video or it doesn't exist.

Well, I won't totally agree with you, as they always post lots of screenshots of it's features, but I also think that we deserve a gameplay video, after what happenned to Omega Warfare I just don't want to get surprised by a game/mod being cancelled and we discovering that it was all a lie...

Well it's just year after year there's always a new upcoming mod that promises the world. Unless I see these features in-game with my own eyes, than they don't exist to me. I mean, old European buildings are cool and all, but when news post after news post essentially shows the same thing, it gets old.

I agree with you.

Lemme see you make maps that look better than this.

what's that got to do with anything you fool??

I can understand your doubts on our development.
But as i can assure you, we have got many gameplay features already
implemented. Big parts of the movement, the inventory base and the basic dialouge system are already written in code and working. The reason we are not yet publishing ingame footage is, that it really needs to be polished. There is a lot work on animations and models, and we are a little short on char modelers, so the ingame footage has to wait until the next update.
As a coder, i got ingame videos on my hdd, but they are missing a character model and animations, and we wont publish alpha stuff. So maybe i could take away your doubts at least slightly but, we are doing our best to bring cool ingame footage to you guys in the next update!
Peter

thanks for your feedback.

First of all - we don't owe you anything, unless you approach us in an adequate tone, a thing that works for 99% of the community ;-) - we're all grown-ups, so you can expect a straight answer to any direct question, and we don't really want the "Pics or it didn't happen." or "Dead." or a similar attitude to establish itself around here.

I also doubt that you've read our additional information about the video footage and / or the design document as thoroughly as you could have; if you had, all it'd have taken would have been a little bit of trust in our word & work, a thing that we actually deserve after the several thousand hours of work we have put into the project by now.

Peter / pnx actually said it all; none of you will want us to release Hammer screenshots or untextured geometry, but there's not a shadow of a doubt that we deliver a result in the end. It's really the same thing with those features and ingame videos - technically, we're there, but we want to transfer the high visual quality into the smoothness of our animations, the quality of our HUD and interface graphics and the polishing of the characters & weapons before showing those things to you crowd.

Just have a little more patience - within a few weeks from now, you'll get what you're waiting for. ;-)

Showing pictures of buildings all year doesn't win over my trust, the only thing that proves is you guys have a great mapper. Maybe visually good looking areas = fun innovative gameplay for others, but not to me.

The "Pics or it doesn't exist" is a very valid point. Every year there are hundreds of promising mods but then the following year they fade into obscurity (Raindrop, Mortewood Plaza, City 17, BLACKSECTOR, SHIFT, etc).

Well, I know both sides of the medal, and I've also learned from many mods that didn't make it past the concept stage.

We don't want to put ourselves under that kind of pressure, since - judging from my broad first-hand experience - this is what kills mods, turning a motivated and relaxed job into a fox hunt. Red doesn't look good on us, so we're not going to enter that circus.

There will be videos, and they will be released soon, but - and that goes for the entire game - not before they are ready and we think the time is right.

You want this mod to be released and so do we. The best way to achieve that is the one we have taken; in fact, I doubt that among all those mods you've mentioned there is a single one that hasn't lost a single member of the development team in 19 months (and we're more than 10 by now...)

What the hell are you talking about MatthewD?

Raindrop has some ingame videos.. and it's alive. It's just not a mod anymore.

Mortewood has ingame videos too, it even had a live streaming video. Dec was busy recently because of working for 1187, but I'm sure it's alive.

City 17 has only one ingame video, and all the features are pretty possible... and they just updated their mod 3 days ago.

To be honest, I don't know anything about SHIFT. I just don't like cars games. But Korge seems like a really mature dev. After a quick research, It was last updated a few weeks ago and have some wip videos, showing wip content, just like your mod.

BLACKSECTOR is another unknown mod for me. I never really liked their desing nor their style. After a quick research, I came up with this site... Theblacksector.com . It's in german, but it was updated yesterday. Their modDB site wasn't updated in the last 6 months and they only show models and wallpapers. Since they started their development back in 2008, I'll bet they are slow devs or busy devs, nothing to be worry about, unless you hate to wait.

And Albastros is right. A perfect example is BM:S. They released a video with a date, that was their biggest mistake. If you go check their ModDB site now, it's more like a warzone.

Until now I loved this mod.
After reading what you planned, I decided to worship this mod, but, well, you have planned so much that I need to take a glimpse of what you did.

Love everything about this mod. And after reading the guide I really want to try it! Keep up the good work!

"With Zeppelins in it."

This sounds awesome, keep it coming!

Still think this mod looks ace without moving pictures. If it is anywhere near how good these screenshots are then fantastic but if this disappears into obscurity no offense I wont lose any sleep over it.

[EN] Do you carry on with this nice and beautiful mod?

As you said: Kommt Zeit, kommt Zeitgeist :)
Zeitgeist is alive and kicking, don't you worry.