As a soldier, what would it be like to face the Red Alliance on the battlefield?

The following is a short story based on the C&C Fanwars mod universe. Enjoy!

Our radars detected a space fleet of the so-said “Red Alliance” in orbit. Until now, nothing to report on the surface. Enemy forces are strangely avoiding combat. We’ll explore the neighboring town.

After a thorough tour of the town yesterday, interrogating many civilians, we established a camp near the ridge. Civilians hadn’t noticed anything unusual and neither did we.

This morning, we were awoken by a meteor shower. When we reached the impact site, collected data allowed to discover that these meteors weren’t simple rocks, nor even Diastim, as it’s often the case near subspace nodes… We found shards of metal that don’t meet the criteria of our alloys. It probably was an orbital reinforcement capsule...

No enemy troop in the sector, but one of our soldiers isn’t answering our calls. A search was initiated to find him.

We retrieved the burnt corpse of our guy… Bastards of the Red Alliance with their flamethrowers. Troops will now stay in squads of five men or more.

A whole day on high alert, spent exploring the zone to find these bastards and still nothing. Squad #4 has reported strange movements in the forest sector. All squads were subsequently deployed.

After establishing an outpost nearby, no activity was detected in the forest, until last night… And then, it suddenly became hell. Squad #2 was attacked by surprise and decimated before we could reach them. Once at their camp, a massive fire was raging! We came very close to having to evacuate the woods.

With the fire finally under control, me and my men were able to furiously rake the surroundings. But still no trace of the Reds. Again, they disappeared right under our nose.

Following yesterday’s horrible episode, we just received a skirmish report. Finally! The enemy forces consisted of three automatised hexapod drones. One of the unit was destroyed by our patrol, but two others escaped.

The destroyed drone carcass is about the height of a man. Its mechanical complexity and its mobility seem quite surprising, however the lack of armor makes it fragile. Its large reserves of flammable liquid seem to indicate that this drone is likely to blame for the earlier flamethrower attacks.

They hide underground… These monsters ambushed us yet again. Two entire squads charred… A disaster that I’ll never be able to forgive myself for. More machines are roaming… More enemy space capsules arrived…

We’re trying to reach the base with all three remaining squads and a lot of seriously injured. We request immediate reinforcement!

The armored transport vehicle sent as reinforcement was destroyed before it could even reach our forces, ambushed at not even 500 meters from us by enemy Attack Bikes. My men’s moral is at its lowest. We’re desperately trying to reach base.

Enemy infantry unit detected. Only one. It will be an easy target...

My god… What terrible mistake! What did we think? My compatriots are all dead… I will die… It is the end! Their soldier was a monster… He looked at us through its sad glowing red visor. He knew! He knew what his disgusting weapon would do to us! When he opened fire… When he fired… It was horrible. I cannot describe this! The radiation wave swept us. All died scorched on site. The men on the ground were still writhing with pain in horrible convulsions. It was too much. I fled. To hell, with this war! Have me court-martialed if you wish! I rather give up than to face Him. I’m trying to put as much distance as possible between me and their… Desolator. 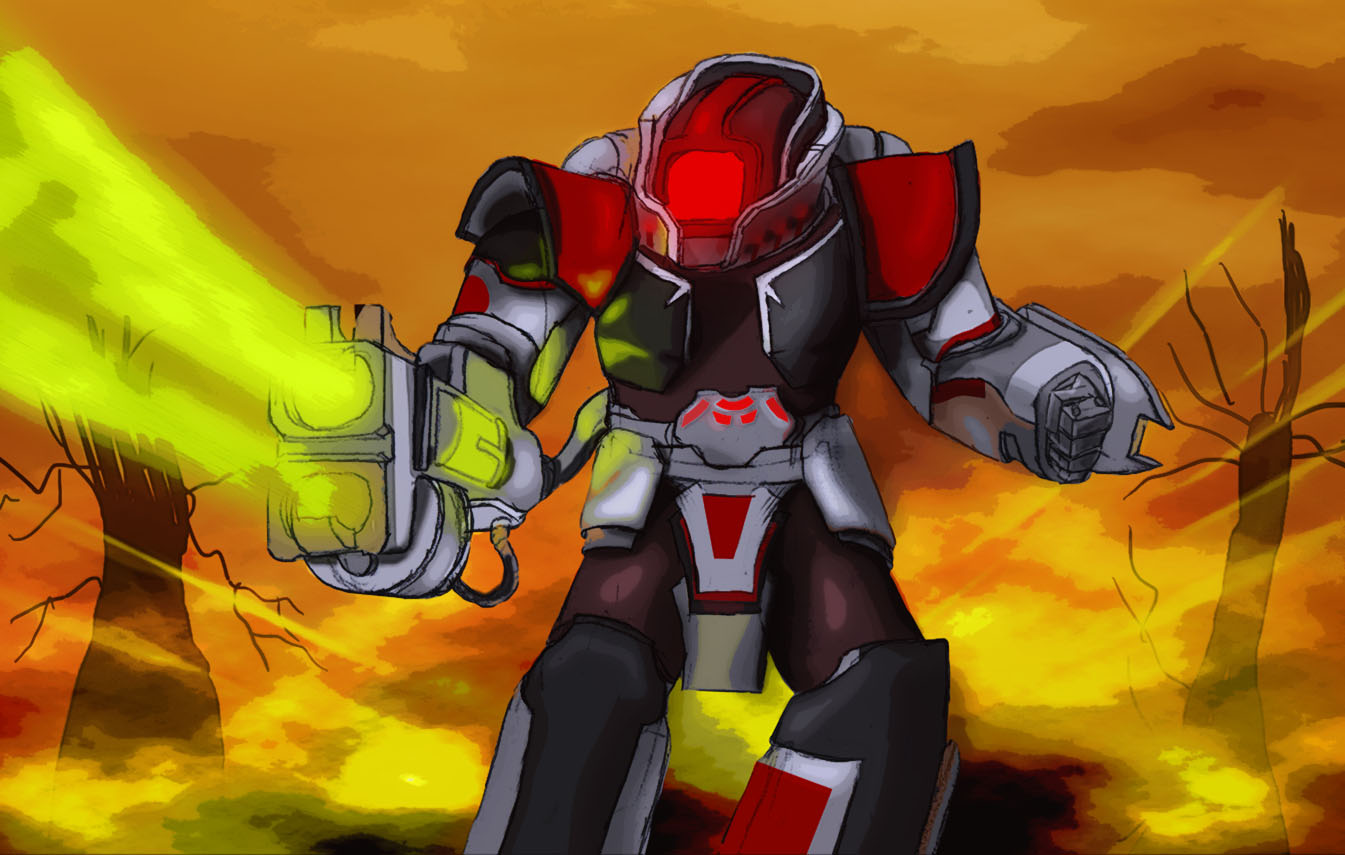 One of their horrible robotic monstrosities is now chasing me… No, I won’t let it burn me alive! There is some ammo remaining in my pistol. I much rather die this way.

This fast robotic unit it ideal for ambush. Its capacity to burrow itself underground hides it from the enemy and provides it with a wide view range. The Scarab efficiently spreads terror on the battlefield: every soldier indeed incurs the risk of being surprised and charred when they least expect it.

Fastest vehicle of the Red Alliance, the Attack Bike is used to scout and chase enemy air units and lightly armored vehicles. This two-wheeled terror can erupt from seemingly nowhere, inflict considerable damage and leave as fast as they arrived. Its ability to detect stealthed units, along with its speed, make it a good unit throughout the game.

When the enemy dares make the life of the Alliance’s troops difficult, the Red Alliance calls on this radiation specialist unit. Its equipment allows to heal allied infantry, as well as irradiate to death enemy troops.

It’s the Desolator’s job to clear out garrisoned structures. It’s outfitted with a very resilient armor, capable to take on shells from tank cannons, radiations, toxins and bullets. The Desolator’s only weakness it probably its slowness, because killing this unit will require several troops and preferably energy weapons.

Special thanks to Divadawm and Molock for their help.

The Red Alliance definitely sound like my kind of team. :P

Are you guys going to do features on the other factions at the same time or will you be getting the RA out of the way first?

At the moment, we are planning to feature the 3 basic factions at the same time, not only the RA. It would be kinda boring. Don't you think? =P
Actually, the next article will be about another faction. ;)

Cool, looking forward to it!

Thanks for your comments everyone! More good stuff is coming! ;)