Showcasing the units, heroes and upgrades of Goblin-Town in the upcoming patch 4.6 - down, down to Goblin-Town!

Today we want to present part II of our update regarding Goblin-Town in Edain 4.6. After showcasing the new models and unique building mechanics in the first article, we are now going to take a look at Goblin-Town's warriors and upgrades. 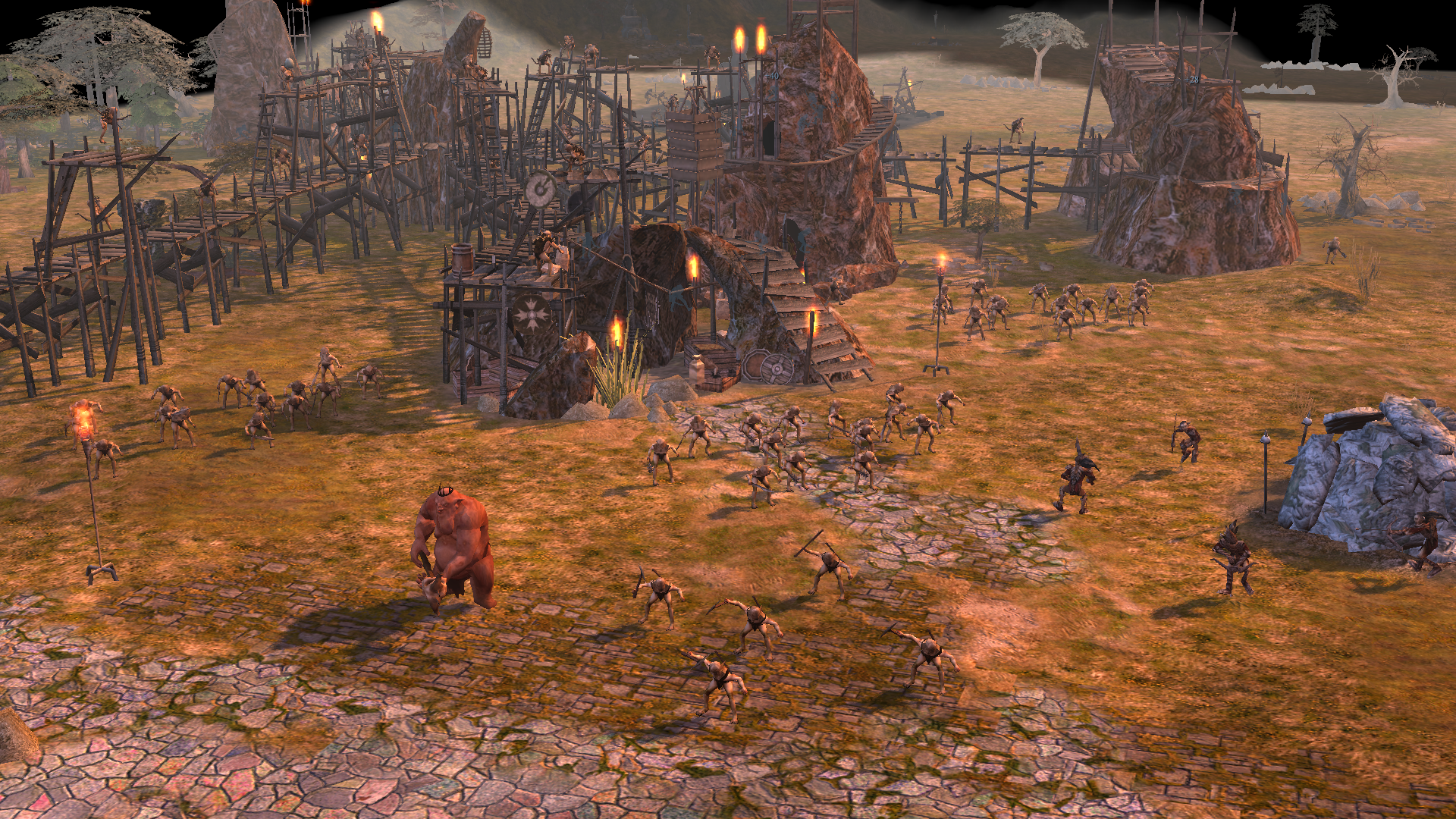 The Great Goblin prepares a raid

Of the three orc realms, Goblin-Town focuses most on improving your economy and therefore offers fewer fighting units than the other two. Now keep in mind that we are still talking about goblins, so massive centralized investments into the infrastructure (in the form of Worker's or Settler's Tools) does not really fit the faction. Instead, the warriors excel in raiding and looting enemy structures while the Loot Hoard offers specialized upgrades to strenghten your foothold.

Goblin-Town provides acces to two units: Goblin Looters and Tunnel-Diggers. Looters are weak melee units that steal resources every time they attack buildings. They may also use their special ability Lord of the Pillaging Hordes once the Great Goblin is recruited. With this ability, every horde of Looters may summon another horde of Looters to their side for a medium duration and also steals resources from buildings. Looters are available in the Goblin-Town Cave at level one.

Tunnel-Diggers, on the other hand, are a small batallion of particularly brave (or particularly crazy, depending on the perspective) goblins that can bypass enemy fortifications and walls and emerge in the middle of the enemy base. They create two holes - one at the starting location, one at the target destination - that are connected and allow allied units to travel through them in an instant. Imagine the chaos that will ensue if you manage to get several Looters inside your enemy's fortress and then activate Lord of the Pillaging Hordes - even a small detachement of units can suddenly start a massive raid! But hurry up, because the tunnel will collapse after two minutes and your retreat will be cut off. Tunnel-Diggers are available in the Goblin-Town Cave at level two. 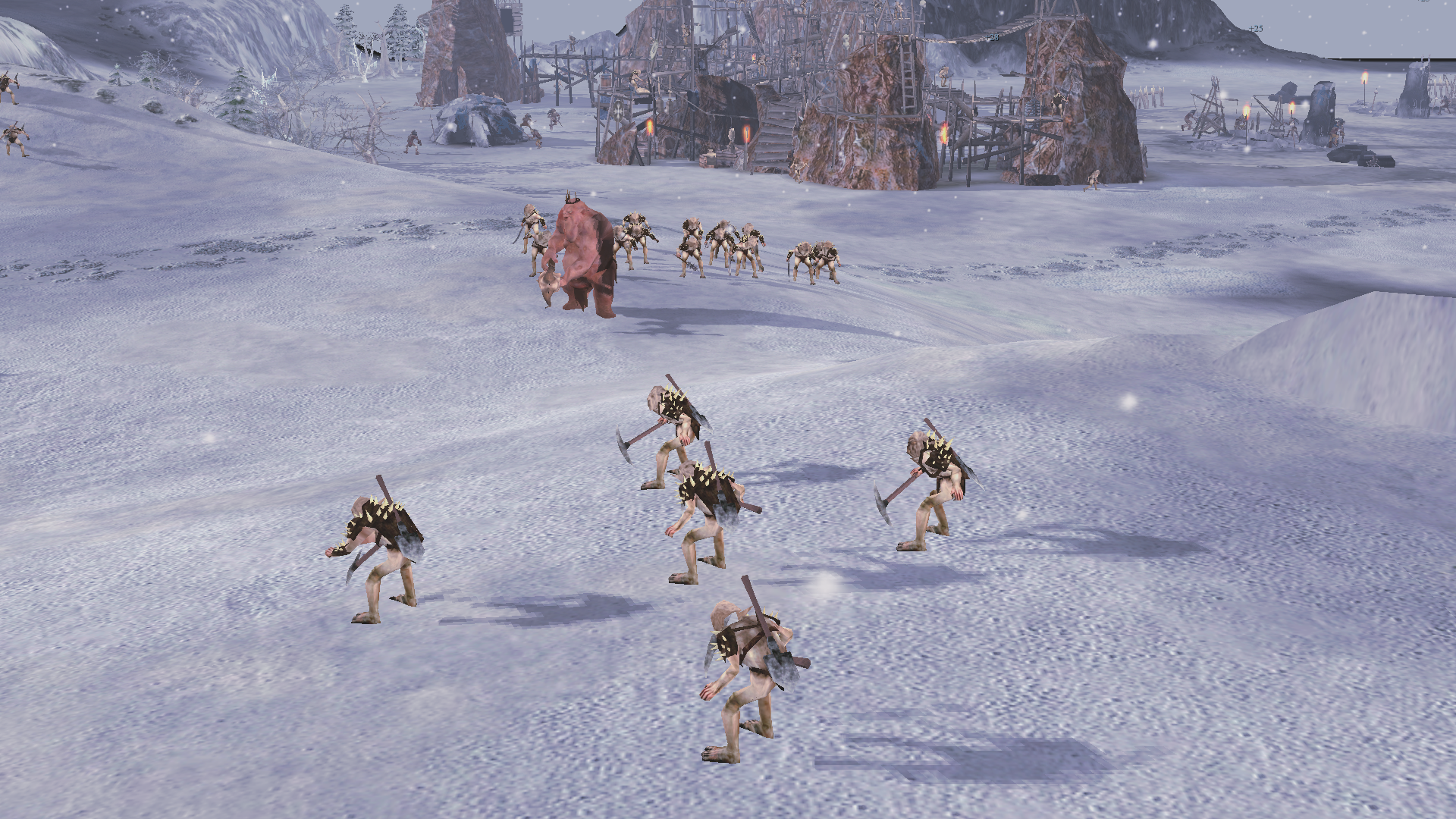 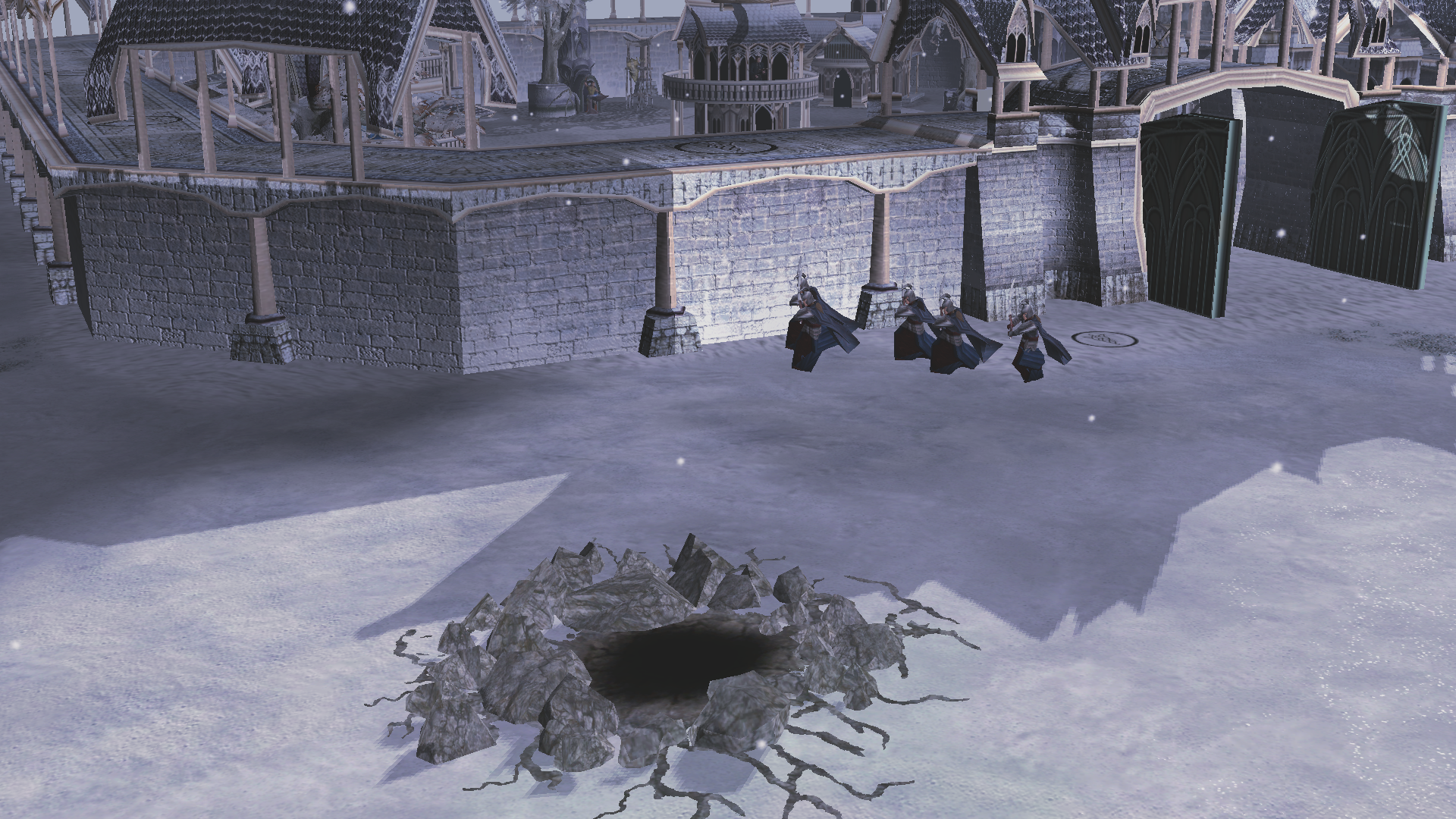 The Great Goblin is the leader of Goblin-Town, supporting and organizing the raids of his looters and leveling the Goblin-Town Cave upon recruitment. He might not be the mightiest warrior, but he can influence the battles all over the map with his abilities.

We didn't change the Great Goblin a whole lot because we still like our initial concept for him. Goblin-Town units can hurt the enemy and do noticeable damage without him on the battlefield, but with his support they become incredibly dangerous. Unlike most heroes, he can also support units that are far away from him, a valuable boost to the rather pitiful fighters. 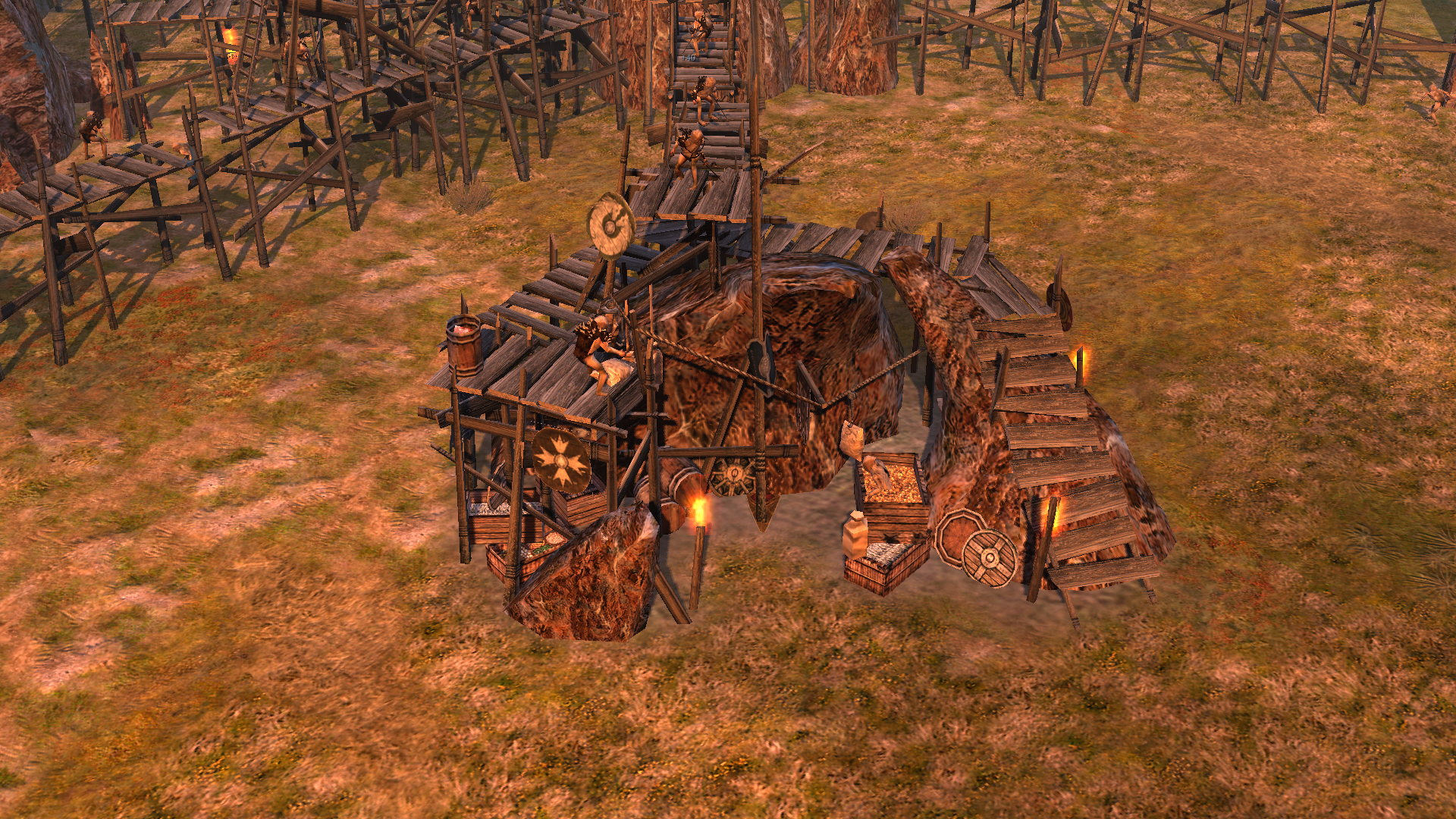 The Loot Hoard is an important structure for players interested in a more robust economy. As mentioned earlier, the Misty Mountains won't be able to research Settlers' and Workers' Tools, as they don't really fit this faction. The different tribes of goblins form several orc realms, not a kingdom united under a strong ruler with a strong government. Having the goblins from Goblin-Town directly improve structures in Moria seemed unfitting at best, considering they usually are competing with each other. And building durable, lasting structures isn't something we see them doing in the first place: The goblins in the Misty Mountains were mostly residing in old dwarven dwellings.

For those reasons, the Ransacked Mine of Moria and the Slave Lair of Goblin-Town, the two internal economy structures of the Misty Mountains, will use the familiar level mechanic from BfME I: They simply gain experience over time. This both balances out the very powerful early game of the faction and fits the idea of not actively upgrading your economy. The only addition we made to this system was that once the first Mine or Slave Lair has reached a higher level, all similar buildings will reach that same level: So once your first Ransacked Mine has hit level two, all other (even yet to be build) Ransacked Mines will also immediately reach level two.

The wild lairs on settlements are a different topic, since they represent independent small tribes of goblins, wargs and trolls. They don't benefit from other lairs on higher levels, but will gather experience from nearby fights: If you kill enemies near one of them, it will progress towards a higher level, where it will be protected by more and more defenders, representing the growth of this tribe. If you want to speed up this process, you can research the following upgrade in the Loot Hoard:

Empowerment of the Wilderness: The warriors of Goblin-Town share a small part of their loot with their wild relatives. As long as the Loot Hoard isn't destroyed, all buildings on settlements will slowly gain experience.

The other upgrades in the Loot Hoard offer additional advantages to keep up with the well equipped and powerful armies of other factions in the later game:

Treasures of Goblin-Town: The loot from Goblin-Town's hoards is used to speed up the mustering of new armies. The cost of equipping heavy armor, forged blades and fire arrows is reduced by 20%.
Extended Raids: Goblin-Town's warriors go on extensive raids to capture more slaves. Increases the production of all Slave Lairs by 25%.

Down, Down, Down to Goblin town!!!

Azog has been long dead during the events of the Hobbit, so he won't be part of our Misty Mountains faction.

Why? Azog was in mod in the older versions, wouldn't it be amazing to see him now with the Nazgul's new model ( Moddb.com ) ? Please Edain Team, don't do that to the good ol' Azog. :(

I don't remember Azog ever being part of Edain.
And as the link states, the model is used.

Oh pardon me then looks like I confused it with another mod... nevermind!

Perhaps confused it with Age of the Ring?

There will be a hero called The Defiler who uses that model and represents the film character. You can read up on that here: Moddb.com

You guys had me worried that you'd completely gotten rid of the Defiler, little did I (and probably several others) know it was a simple mis-naming on our part :D

Fabolous work as always, but I a short question about The Great Goblin's final ability; how exactly does the Plunder Cart work? Does it make nearby units gather recourses from attacked enemies (like Eomer's "Leader of the Exiles"), or do you simply ride it over the corpses of slain enemies? I'll admit this is something that's confused me since I read "The road to the Misty-Mountains part 2).

Anyway, I can see Goblintown will be very effective, just as all the other Realms are.

The Plunder Cart can do one of three things: Collect meat, weapons or riches. The it gains experience if enemies nearby are slain. Once it hits level two, the Plunder Cart can give out what it gathered, resulting in a strong heal (meat), heavy armor for units (weapons) or resources (riches) and being reset to level one again. If you wait longer and the Plunder Cart reaches higher levels, the effect becomes more powerful.

Wow, didn't expect it do do all that. Cool.

I have a question too, for the Heavy Armor part; how does it exactly work? Like at Level 1 cart gives lower armor but at level 2 it gives more? So does Goblin-Town has more than 1 Heavy-Armor sets for units? (like mostly Heavy-armor sets are about 1 set which gives X amount of armor, so Goblin-Town's Armor sets are split like X, Y, and Z?) :)

The radius of the ability increases, meaning more units are affected by it.

Lookin good Edain team! I'm looking forward to all that pillaging and raiding :)

Hi Edain Team! First of all, I love your work! I played BFME1&2 when I was 12-15 years old, and just rediscoverd the game about a month ago! Amazing to see what great things you have done with the game!

Now that I am reading about the upcoming 4.6 update, do you have any idea when this might be released?

It's a hobby for them so no release dates, it'll be out once they're done adding features and it's all been tested.