Post news RSS The road to Edain 4.6: Goblin-Town, part I

Take a look at the buildings of the second orc realm of the Misty Mountains: Goblin-Town!

Today we want to present to you the new build-system of the second orc realm: Goblin-Town.

Seven and a half years ago, we showed you the first impressions of the reworked Misty Mountains and explained our goals behind the faction design: The player will be able to call upon the Goblin Dwellings of Moria, Gundabad, and Goblintown. Each of these three will offer specialized units and strategies, so if the player wants to unleash the faction's full potential, he has to command over all of the Misty Mountains!
One of the biggest features of our plan was that the Misty Mountains were to offer a unique variation of the fixed buildplot system, allowing free construction to an extent in order to reflect the faction's wild and chaotic identity and offering an interesting and unique playing style.

Early on during development, we encountered technical difficulties when we tried to implement our initial plans. Freely building the camps of the three Goblin Dwellings did not work smoothly in a lot of cases and often times, buildplots would just disappear. This meant we had to scrap the premise of freely building camps. But instead of giving up, we doubled down on keeping the less restrictive build style and even enhancing it further.

For that reason, Goblin-Town will not be constructed as a base, but as a single building. Each builder can construct a single Goblin-Town Tunnel, which then allows further expansion for the player in an area around it. With the help of scaffoldings, the player can construct buildings in vicinity of the central hub and thus create a massive, interconnected Goblin-Town encampment. 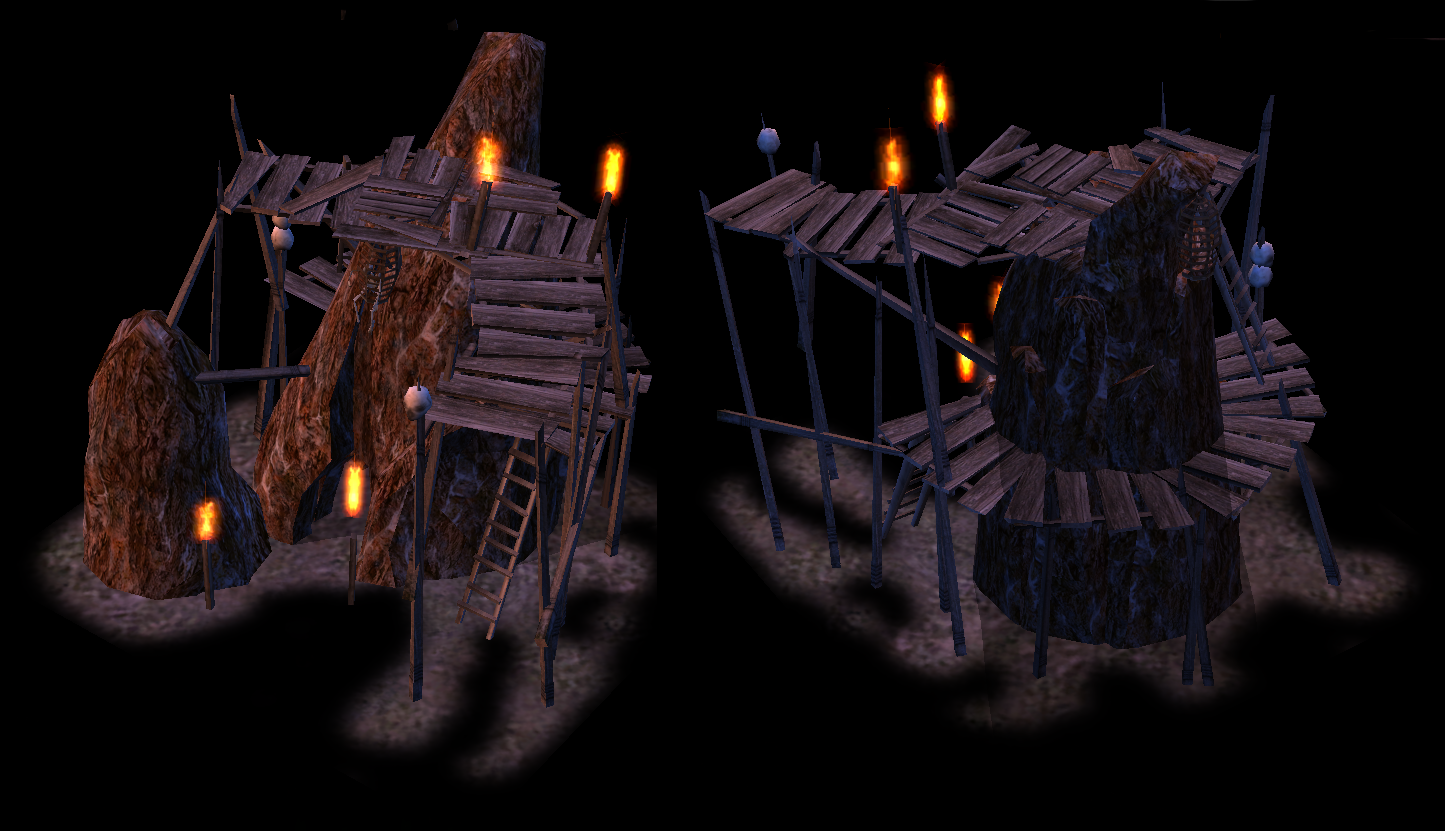 The model of the Goblin-Town Tunnel has been reworked, and now fits the role of a central building for Goblin-Town much better. Similar to the other new buildings, the Tunnel also heavily features a lot of scaffoldings. Of particular importance is the semicircular scaffolding that surrounds the Tunnel - because the buildings need to be connected, you can only build additional structures on this side of the Tunnel.

From that semicircular scaffolding, a connected path of scaffoldings can be constructed, at which end is one of the other Goblin-Town buildings. This works similar to how walls are dragged from one wall hub to another. The difference is that in this case, at the end of the scaffoldings are no wall hubs, but the Tunnel and another Goblin-Town structure. 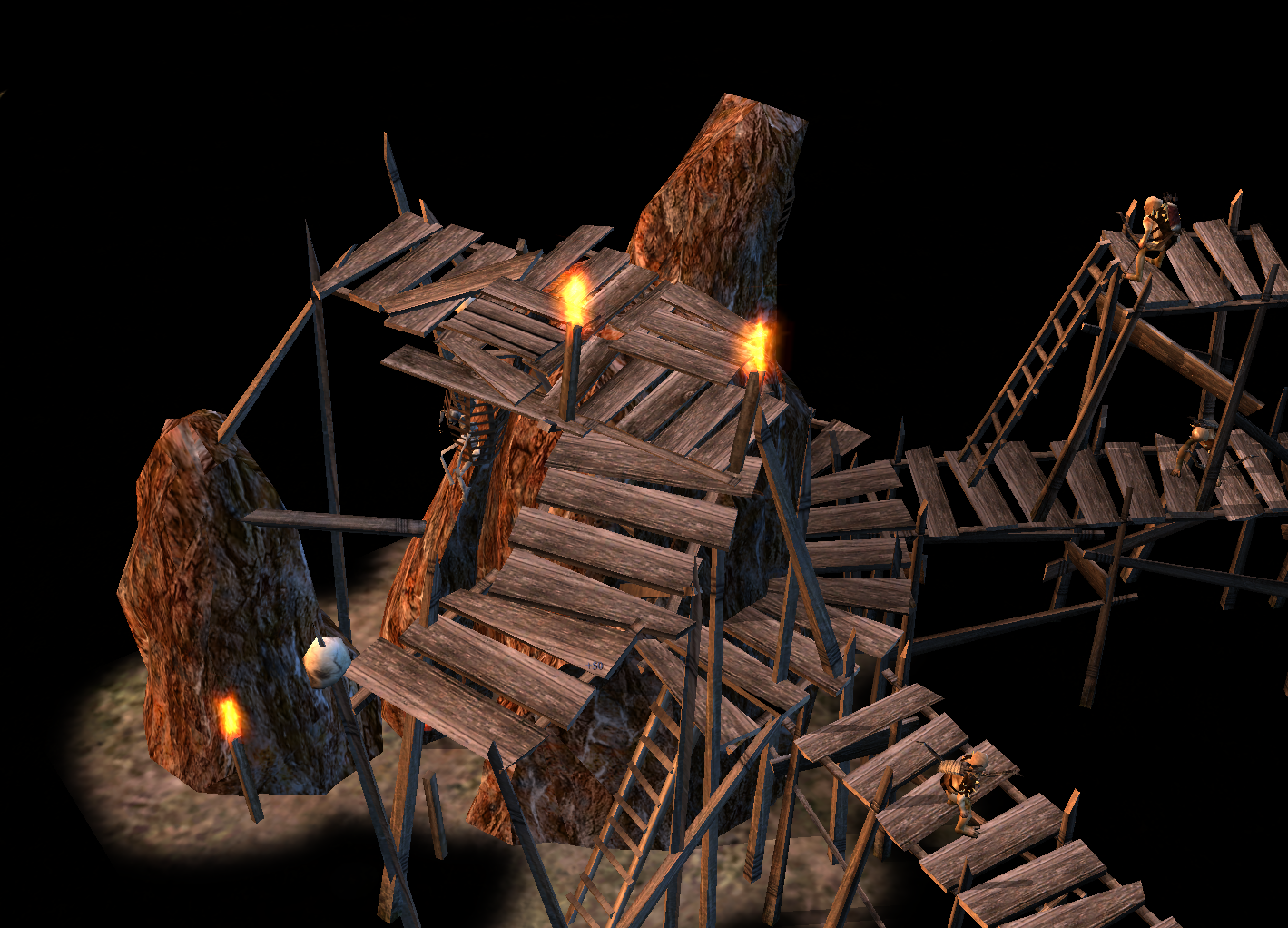 Scaffoldings connecting to the Goblin-town Tunnel

This way, all of Goblin-towns buildings are interconnected and form a huge, wild and chaotic base. We created different types of scaffolding to make the base look more diverse. We also made sure that all of the new Goblin-town buildings seamlessly fit with the scaffoldings and don't have dead ends.

Scaffoldings connecting to a Loot Hoard

And if a player wants to, he can even build a Goblin-Town base consisting of multiple Tunnels:

But the Tunnel itself wasn't the only building that was reworked. In case you missed it, here are the new models for the Loot Hoard and the Slave Lair:

In part II, we will take a closer look at the buildings, units and of course the Great Goblin. We hope you like the new build-system for Goblin-Town and are as always looking forward to your feedback!

Down down down to Goblin Town!!!!

The Goblin Town base will be quite chaotic with all the scaffoldings, like it was in the movie... I like it!!!

just a truth, i didn’t offend anyone.

I just don't understand why you're still here.

Good to see you around, dear Mathijs!

Amazing how you overcome obstacles even when the initial plans don't work.
The concept sounds great.

Hello Edain Team! I'm so exited to see this news! Its incredible how you do these things!

I have a (possible) bug report. I know this is not technically the right place for such things, something which I will address below.

I noticed that Shagrat's "Foul Guardians" ability, if used for example on a Mordor barracks that has a Troll Cage close to it, will create guards on both structures. I regrettably never checked if it counts towards the limit, however. I don't know if the team is aware of this, but I felt I should report it.

Why am I posting this here? For the life of me, I cannot log onto Modding.Union! It keeps telling me that "My username does not exist". I have tried multiple times, with multiple usernames and passwords, and still nothing. I'm using a Mobile, does it perhaps have to do with that? I'd be grateful for advice or help.

Sorry for the Black Gate sized wall of text XD

If anyone can be of service I'd be very grateful :)

Glad you like it. As for the MU: Did you create an account before logging in?
If yes, send me a pm with your username and email and I'll look into it.

Thanks for the offer, but there's a few more things I'm going to try before I take you up on it. I've thought of a few ideas that might work. Will get back to you at some point though :)

Been waiting so long for my favourite faction the goblins to get some love. You guys are doing an amazing job, what a great team! I'm really hyped for this, i check every few days for news 😃 Keep it up, love the look of goblin town

The scaffoldings are currently walkthrough at the ground level, but we might change that depending on internal feedback.

Note to myself: Create a destruction animation xD