In this news we show you some of the new economy buildings, which will be integrated in 4.0. Every building will have special functions to underline the unique strengthes of the factions. - Some of these things will be shown in this news.

Before coming to our today's update it's a pleasure to tell you that our current version (Edain 3.8.1) got over 55.000 downloads! (if you sum up the downloads on moddb and our main page www.modding-union.com)
This is our new record and there are more than 15.000 more downloads than of our last version. Most important for us is the awareness that Bfme (and also edain) still has many fans and enjoys great popularity. In addition it is fantastic to know that our numbers still can rise, even though you can't buy the game anymore. We want to say thank you to all our long lasting friends, who supported us and always stood by our side!
After telling you a lot about the changes for some heroes in our last update, we want to present you an update which gives you more information about the economy buildings.
For the next version we tried to underline the different identities of the factions by giving more possibilities to produce resources. For us it is very important to show different economy systems, which not only produce resources, but also give you price reduction or other special features. The normal farm, which just produced resources will be the past - today we spend time on collection of taxes, grinding, producing of parchment or the breeding of purebred horses.

We've already showed you the hobbit-farm and the Rivendell-scriptorium in earlier updates. Today we show you some more farms which brings color in the lifeless resource building system.
There are different kind of price reductions, which can be achieved with special economy sectors.
Those bonuses lower the costs of specifitc units and stack 5 times so you can get a reduction of -40%. Each player can decide for himself if he wants to reduce the price of upgrades, machines or infantry.
Gondor will have beside of the farm and the smith another economy building:
The dwelling house.
It's a long wish of the community to give gondor more of a "city feeling", which will be brought by such a house.
From each of those dweeling houses you will get taxes. There are two different models, which will be build randomly. The size is similar to the size of the barracks.
With those dwelling houses we will also introduce a new inhabitant-system.
Per level each house will spawn two people, who wanders around the house. They have diversifying routes and stop from time to time to talk to other dwellers.
You can see those features in the movie at the end of our update.
Additionally, as an attacker you can kill all of them and see them running away in panic when you attack the castle.
In the following screenshot you can see the different dwelling houses detailled. The level changes are shown from right to left:
Dwelling house 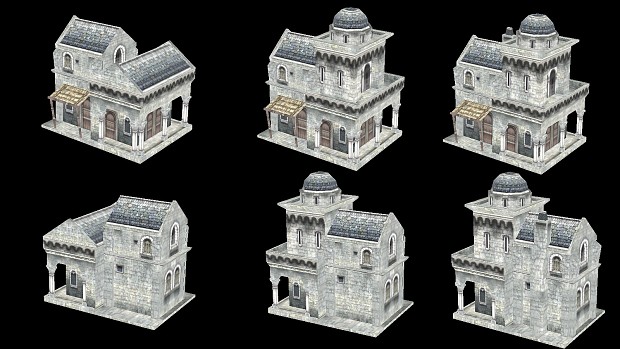 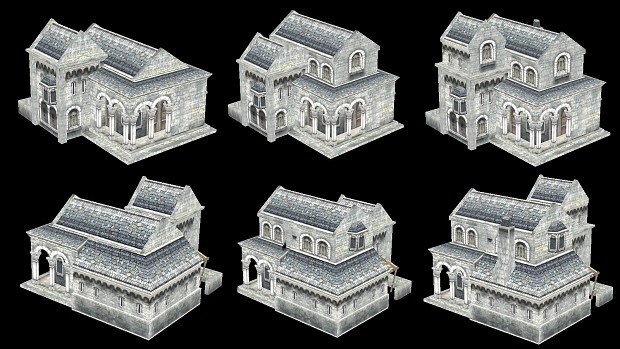 Rohan also will get new economy buildings to show their strengths better.
Beside of the farm Rohan will firstly get a mill, which grinds the collected corn and secondly a stud to have purebred horses.
With those two economy buildings there are two more sources of resource productions:
meal and horses.
The stud can be build in- and outside of the castle and cheapens rohan's cavalry. The mill can only be build in the fortress, but gives no price reductions. Therefore you can recruit peasents there. Farms have the same feature, but can't be build in the fortress.
The following picture shows the mill on level 3. Reaching level 2 the building gets the roof over the part with the horse and at level 3 it gets the arrow tower and the flag.
Mill 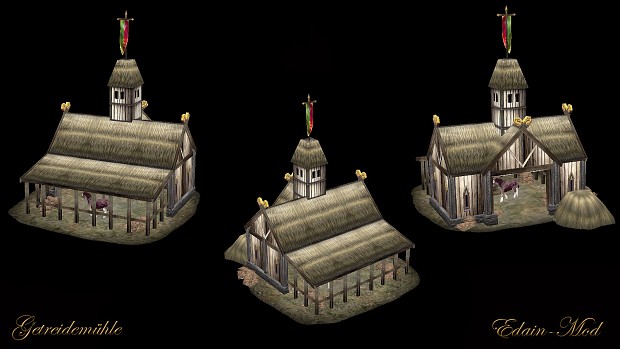 The stud uses the already named inhabitant-system. The horses will move randomly on the belt and will stop from time to time to graze. In our opinion the stud shows an important point of rohan: The dependence between human and animal.
At level 2 the stud gets windows on the roof and flags, at level 3 an arrow tower.
Auf Stufe 2 erhält die Stuterei die Fenster am Dach samt Banner, auf Stufe 3 erhält sie den Pfeilturm. 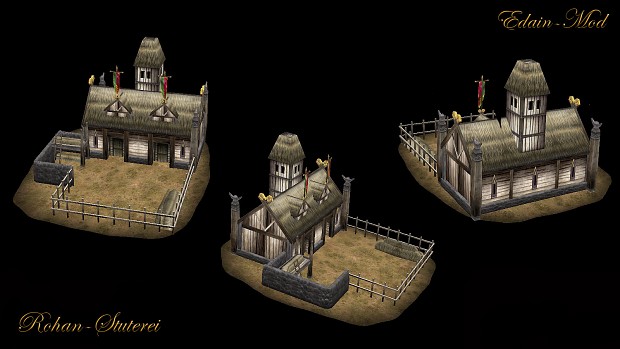 Our last pictures shows the dwarven-'stone pit'., which will be a special economy building. Beside of the producing of resources (stones) and therefore a price reduction for buildings, this building will give you three different upgrades on level 1, 2 and 3:
Defensive line: Enables the possibility to use another defensive line in front of your citadel.
With this upgrade the player has the possibility to build towers or hearthes on two slots in front of your citadel.
Battle tower training: Strengthens the damage of your defensive buildings
Your towers will now attack with forged axes.
Building mechanics: Levels up all buildings to level 3
All buildings in your fortress will be leveled up to level 3.
The picture shows the pit in its final form - smokestack will get bigger with each level and will smoke ingame. 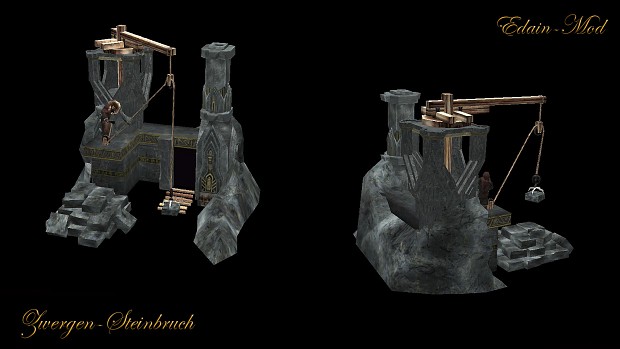 The dwarves will also get a lumber mill for their neutral points plus the mine which can be built in- and outside of the castle.
Finally we want to show you a short movie about the new resource production buildings of Gondor and Rohan:


We hope you liked the update and are looking forward to your feedback!
Your edain-team

This looks great! I can not wait to try this, keep up the good work!

Excellent ideas, one and all! I can't wait to see what you've done or are planning for the Evil factions...

Looks great! And you can still buy the game, it just costs one hell of a lot of money :P

Yeah, but you can't buy it from a normal shop, just from other players who bought it.^^ (and EA Games doesn't produce the game anymore)

This is probably the best deal you can get: Play.com - €64.99
Lord Of The Rings: The Battle For Middle Earth II (Collector's Edition)
If anyone else knows of a better deal let me know :)

Having bought the complete BfME anthology for 20€ once, this makes me feel really glad about it :D

Excelent ideas :D. For those who thought you guys weren't going to create, just bring Bfme I to the 2nd game, that's one nice post ^^. Never tought of economy like that, it'll be awesome to play! Just one thing, "The mill can only be build in the fortress, but gives no price reductions" Do you think it would be better to give a reduction to peasants price? Or an economy boost?

Passive economy boosts are always very difficult and nearly impossible to implement, as the cp bug is created because of them. (sometimes the CP just disappeared and you weren't able to build troups anymore)
Peasents are already very cheap and we decided to try this, as otherwise Rohan wouldn't be able to build any melee fighters in the fortress. That would make rohan very weak if they had no farm outside of the castle. Therefore we will try this. If we notice that it's needless there is of course the possibility that we change some of the systems. :)

AWESOME q.q tears coming down for the real bfme spirit!

It's so sad that it takes a small team of experienced modders to show up and beat massive companies that have been in this business for years.

It makes me wonder why they don't attempt such quality in games in the first place.

Amazing stuff! Cant wait for this! Thanks for post Gnomi

WOAH, that thing with the gondorian houses is allot like what I wrote in a post like half a year ago that you should do! Not saying you got it from me ofc but that's awsome. I really like this idea!

As said:
There were many people who wanted those houses in the mod, not only you.^^
But it wasn't possible to make this looking good in the free building system. But for the castle system it's just perfect. :)

Great!I would like to see the gnomes,it would be magnificent.

i got a question when will be available the download for patch 4.0 ?

The team is not giving any release dates for 4.0.
They don't do so because it might indeed take a lot of time to fully complete it, but keep in mind that it's a huge modification, and they are doing their best to bring us the greatest quality of work they can create, thus bringing inovation to the gameplay in several ways that many of us wouldn't think of, such as this new Economy System. Don't worry. They'll make it. For now stick to the 3.8.1 which is a great version as well.

Congrats for your job,you are very dedicaded in this mod and you do good work, play rise the witch king and not test the mod edain mod, you don´t playing this game thanks for that opportunity playing it!

You know say if somehow add Mumakil, the next update? I really like Mumakils, and would love to play with this unit in Edain mod. Greetings from Brazil.

You can already play them. But you have to recruit suladan. With him you can summon a mumakil pit.

Oh, did not know that.
but one thing, Sauron (with the Ring) has 3 skill disabled, the last three skills, which I could not translate. It says you need to use to activate Past Age (or something similar), how to use these 3 skills? What do would Past Age and how active? thanks for listening, and sorry for the bad english.

It's a spellbook power. You have to buy it with spell points. (I don't know how it works in 3.8.1 - perhaps you'll also have to use this ability afterwards on sauron)

What do you mean?
Do you mean the solution ingame?
You can simply change it by yourself. (you can also use the switcher and change it there.)

The easteregg is bugged. I have deleted your post, as we don't want the factins to be written here. Next time write a PM please.^^

Will there be new factions for version 4.0?
For trolls of Angmar faction, they can not be anew a purchasable unit?
Thank you and keep up the great job

(Sorry for my english)

how far is your progress? have you put in like 40% of what you want to add? or are you just in the beginnning stages