Introducing the camps and some adjustments for the imladris look.

Greetings, companions of Edain!
In the previous news we have told you about the dwarven stronghold and the rivendell fortress plus the reasons of returning to the Bfme I building system.

In the last weeks our work was successful and we're happy to present you some of our newest accomplishments!
Due to the conversion to the Bfme I building system we managed to regain many old edain fans and were able to convince other users, who weren't happy with the changes.

Today we want to present you a new update, which shows you the small camps in the building system. In Bfme I there were big fortresses and small camps which were used on small maps not having enough space for fortresses. Those camps have a small wall, but it's not walk able and just gives you additional defense.

Those camps give you a completely different feeling which is based on a more offensiv gameplay and the defense of small canyons and narrows. The new dynamic of those camps will give you many other aspects to consider than the fortresses. In the next version 4.0 it's very important for us to give you as much variety in the game as possible. That's why we try to give every map a different gameplay. This includes the building system, but also the tactical play and boost of skill of the player.

We made some screenshots, so you can have a closer look at the camps in their starting look and their final, fully constructed look.
As you can see, we have took your critic concerning the rivendell fortress to our heart and have implemented some changes. Those changes will be noticeable for both, the camps and the castles.

Evil factions like Mordor and isengard are also with camps very agressiv; their camps have much weaker defenses and are designed for a much more offensive play.
Their fortresses have no extensions, but still can be upgraded. 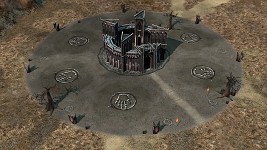 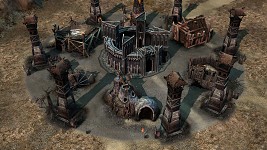 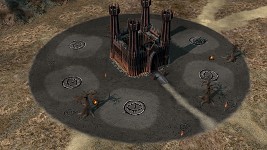 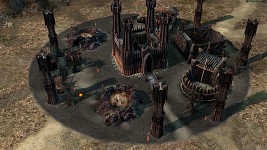 Good factions like Gondor, Rohan, Rivendell or Dwarves have a small wall circle, granting them a bit protection against aggressors. In difference to the walls of the fortresses the camp walls aren't walk able. We have tried to give as much variety and diversion in the buildup of the small fortresses.
While Gondor and Rivendell own a stylish, round wall, the dwarves are defined with a massive hexagonal wallcomplex.
Rohan on the other hand has many openings in their walls to fit to their fast cavalry plus their offensive peasant armies.
The building plots are designed to fit to the openings. So recruitment building can bring your units directly to the front. 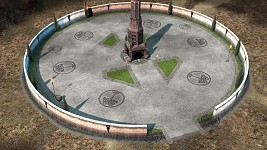 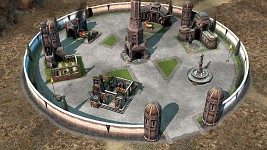 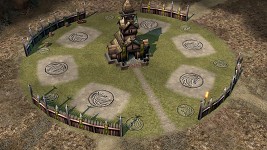 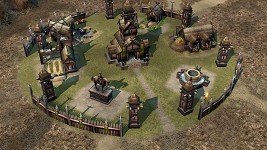 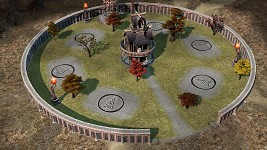 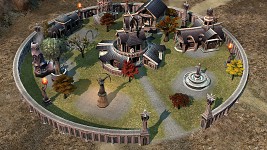 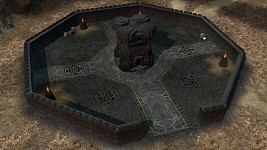 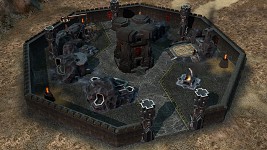 As you can see we have used another floor for the imladris camp than we have showed you with the fortress. Many complained that our version looks to stony and not like the fortress of elves. That's why we changed the style and implemented the same changes to the fortress. 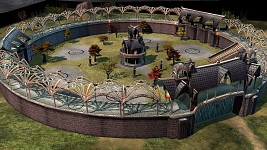 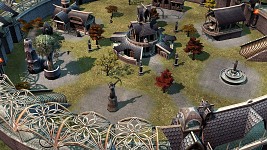 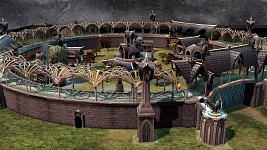 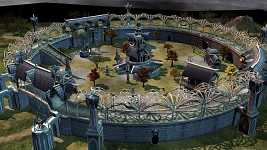 Also we reworked the skin of the imladris soldiers. Now they have the same color combination as in the hobbit movie: red, blue and silver. 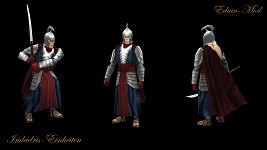 We hope you liked the update and are looking forward to your feedback!

Awwwwwwwww why do you do this to us! Whyyyyyyyy! The waiting hurtsssss ussss

This looks amazing, this is a mod I can look forward to! :D

Maybe devide the elves into three different factions - Rivendell, Lothlorien and Mirkwood - as the RJ-mod did. That would be mental!

That's the ultimate faction list if you ask me.

I like that too but the Wild Faction is a bit oute of place! And I live the Dwarven sub-factions. We could see perhaps some other never seen factions like.... Umbar(!)

fix the errors on the dwarves campaing

As said a few times:
They are all fixed. In the next version you can play the campaign without problems.

plz uploadon desura. if u can :)

Everything looks amazing. Thanks for all the hard work, can't wait!

Don't know if anyone has mentioned it elsewhere, but will archers get some sort of defensive bonus if they are up on the walls(for fortresses)? I remember on bfme1 archers tended to die pretty quickly (especially Rohan yeoman archers) when up against other archers and usually I just relied on building towers. It would be a bit more realistic because if you are up on a castle wall, you get some cover behind the defenses and are harder to hit.

I don't know if it would screw up the game play and make it too easy to defend though.

They can shoot a bit further then the archers which stand on the ground. The other thing ()defensive bonus) is not possible. :(

I think that would work just as well to be honest!

On BFME1, as Rohan you used to be able to build a banner on the wall (in place of a tower or postern gate) which gave the archers a boost. That helped a bit. Have you considered that?

Looks great! Only one question which I've realised during playing against Mordor: The AI is using a lot of Morgul riders from Tombs (in most of my games more then regular Orcs). I suppose this is a little bit strange in compare to the book/movie lore... But surely looking forward to the new version!

The AI will be completely reworked for the next version. ;)

This is so amazing! Thanks Gnomi for a very nice article! Cant wait! ^_^

You can't download this yet. This are just things we will integrate in the next version. The current version is downloadable at "downloads":P
But you don't have the new building system in it.

fix the bugs on imladris and dwarves special ability :)

If you would tell us which bugs?

İmladris: power point does not rise
Dwarves: when I select other races outside of Erebor (Ered Luin, Iron Hills), Greed (in english version name), it is creating a Balrog on my mine :)

You guys should make another Minas Tirith, like the original in the movie,
it should have a round gate like amon sul and have 7 levels all should be usable, the fortress should be the white palace on top and it should already have buildings on all levels and there should be spots, like square plots where u could build barracks and stables and stuff and the trebuchets of minas should be unique as they should throw the ruins like in the movie and there should be gates to access levels so the enemy would have to take 1 level by one. I suggest this because I hope it could be like the Dol Amroth map you guys made which is my favourite.

there should also be another rivendell like the one in the hobbit, where the bridge is thin not thick and it should have better defense as it is hard for my archers to shoot on the waterfall bridges

The problem is that Minas Tirith is a tower - 7 walls are not really possible for a normal map in Bfme - either the map would be too big or not possible at all for the building system and would probably look like crap. (one of the main problems is the sight. The camera would always jump very much. And archres on the top rank in minas tirith would have gigantic boni on their range - they could easily attack every unit on the whole map)

What exactly do you mean?
You can just build on the camp spots, so you have can't build everywhere with porters.

İmladris: power point does not rise
Dwarves: when I select other races outside of Erebor (Ered Luin, Iron Hills), Greed (in english version name), it is creating a Balrog on my mine :)
and upload on desura if u can :)

Imladris:
Build "Gelehrte". (you have one at the beginning)
Then select the book power. A few seconds later you will get as many powerpoints as you have "Gelehrte".

The greed power has always a chance to summon a balrog. Sometimes it gives you cash, sometimes it summons a balrog.

So those things are no bugs. ;)

1 Can you put both? I mean, build inside the small camp for a easy defense with the camp slots and out with the workers?

1. No.
Read the first news - we have explained the mechanics there and said why we don't want the system of free building anymore.

3. Again: Read the news. :P The next version will be available in english.^^

so in cities like minas or helms, you would already have slots?

Yes. If you play in fortresses you will have slots in your fortress.

Can you put new factions like haradrims or the 3thr race of elves?

We can only add 2 more factions, there isn't space for more.
We have said many times that we will add 2 tafctions if we have time for it and we don't have work for the existing factions left(=> we think that the other factions are 'perfect' as they are)

I look forward to the innovations :), tell us quickly :D

really curious to see all of those updates we were told we were going to see in march. o_O

Noone in the team told you that we release more things in march.