The Concept
From the start, I knew that I didn't want the Necrotroph to be incredibly hostile looking at first glance. When the player spotted a Necro, there should be a moment of hesitation as they try to discern if what they are looking is a threat. So for the first round of sketches, we played around with different ways the Necro could "transform" from appearing human to looking hostile. 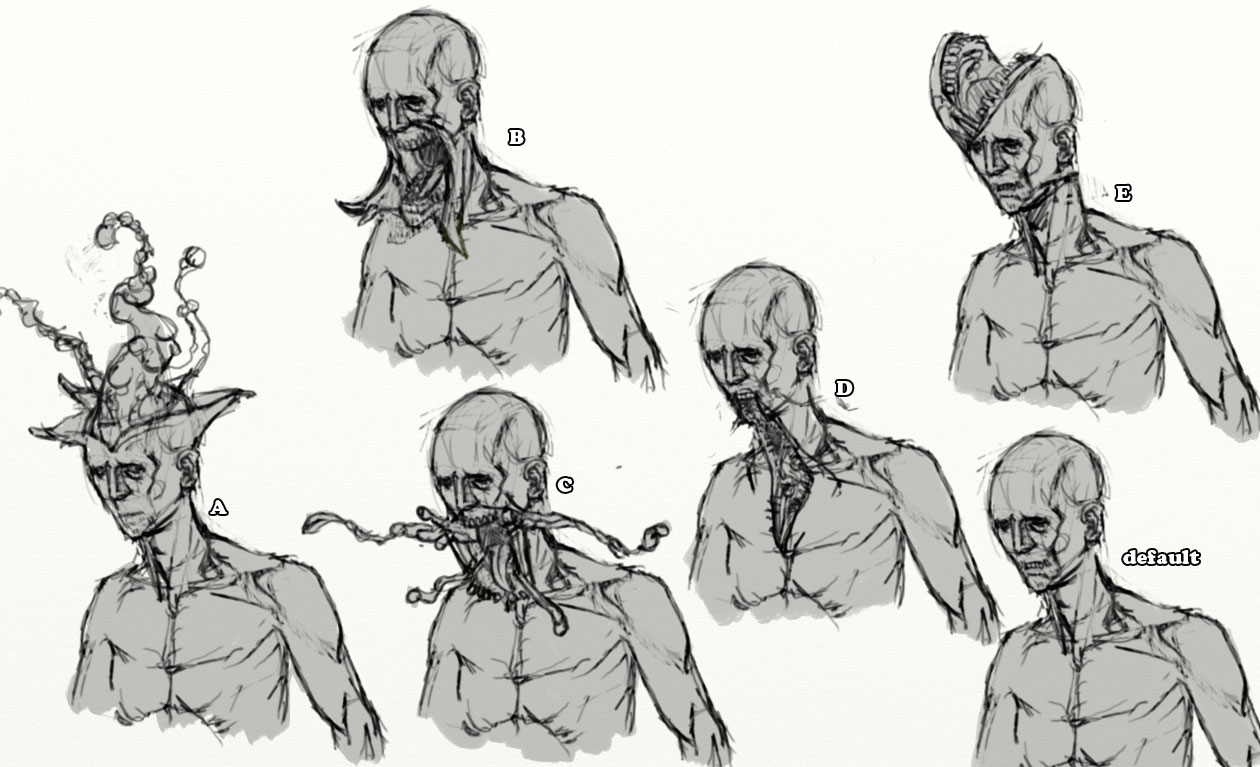 We ended up combining both C and B. 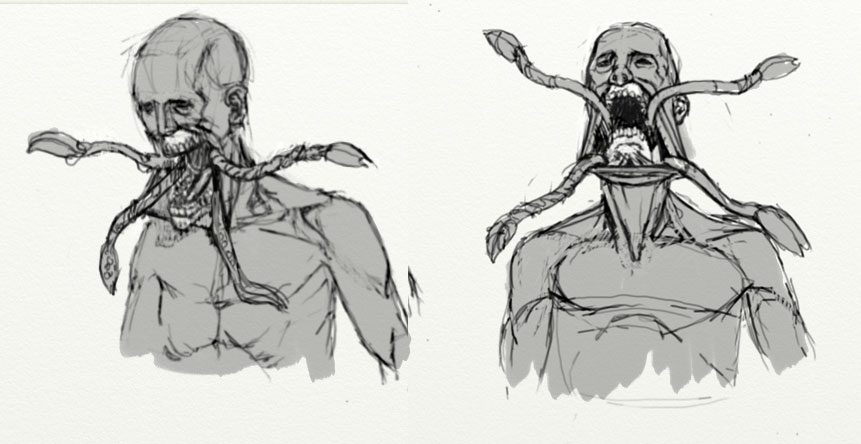 Once we found the face we liked, figuring out the rest of the body was fairly easy. We instantly knew a character like this needed to have ripped clothing, lots of dirt, and overall just raggedy. While the rest of the body was being fleshed out, Jonny had simultaneously began choosing colors. Being a parasite-controlled human and NOT a Zombie, more pink, yellow, and purple-ish colors were chosen to show the Necro was more diseased looking and "alive" rather than "dead" like a zombie. 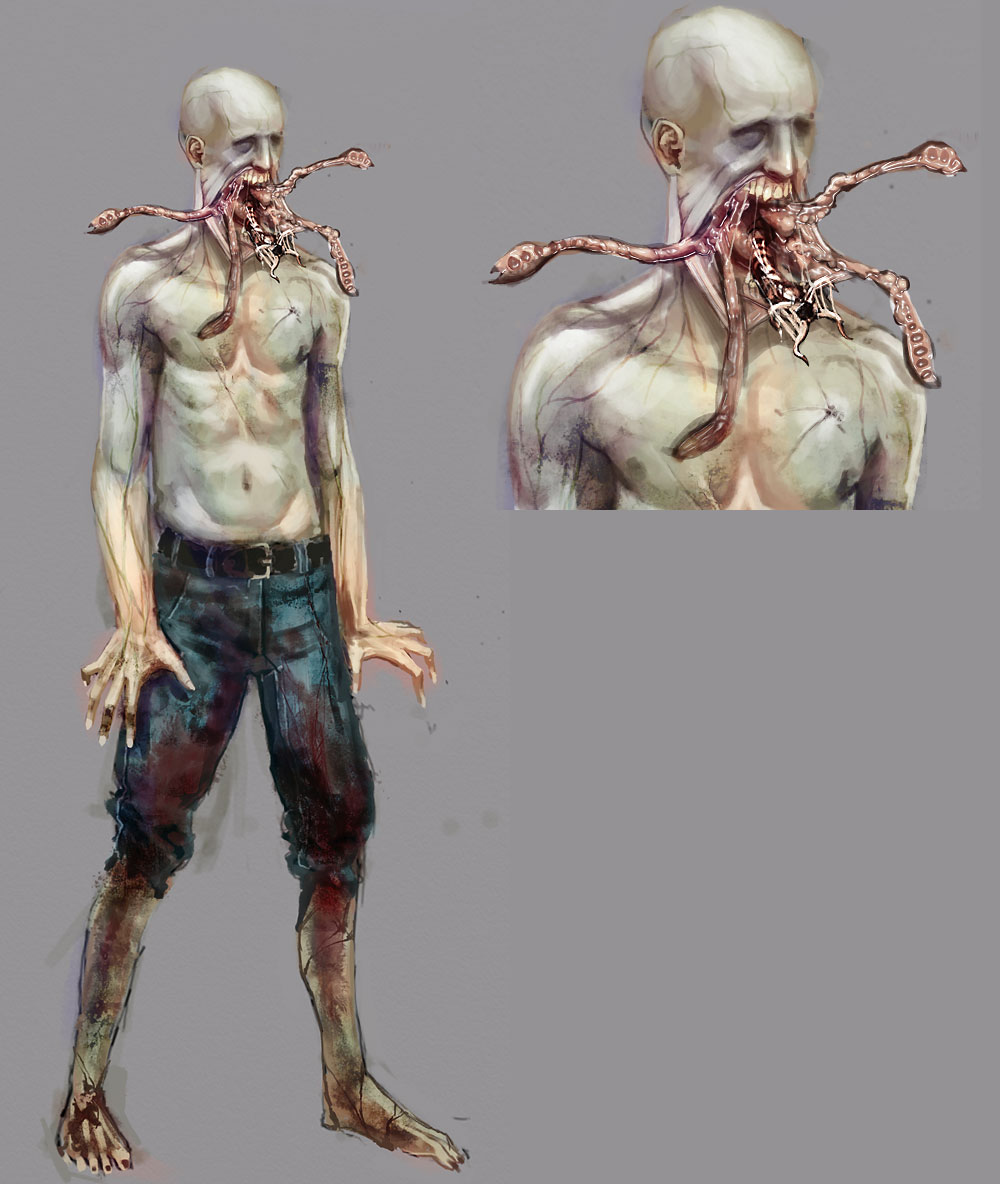 While we felt overall the character was moving in the right direction, we still needed to make some changes to the mouth and face. At this stage, the tentacles resembled more of a plant than of a realistic parasitic organism. Also, we wanted to show that the host's body was trying to reject the organism so Jonny added more rashes to the Necro's mouth (as the parasite's tentacles slither in/out frequently). We ended up going for more of an octopus/sea creature look for a couple reasons: 1. The parasite needed to look like it belonged to a water-based environment (since it primarily lives most of it's life within a host) and 2. Adding suction cups hinted that in addition to strangulation, the parasite also uses suction to hold it's prey in place (so that it can fully emerge from it's current host and transfer itself to another or just feed). 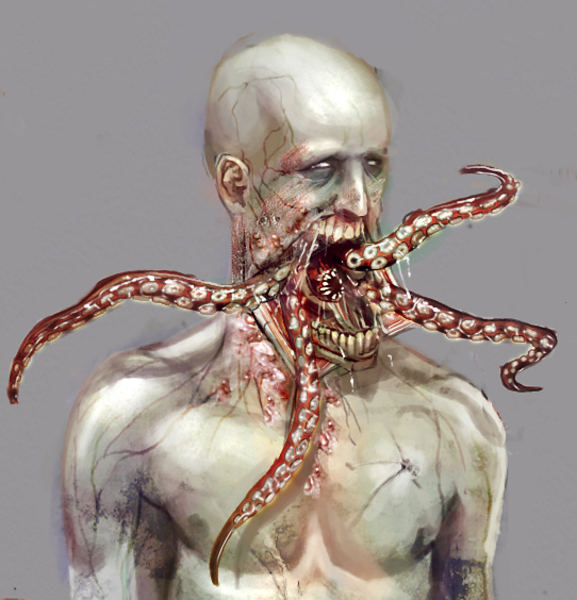 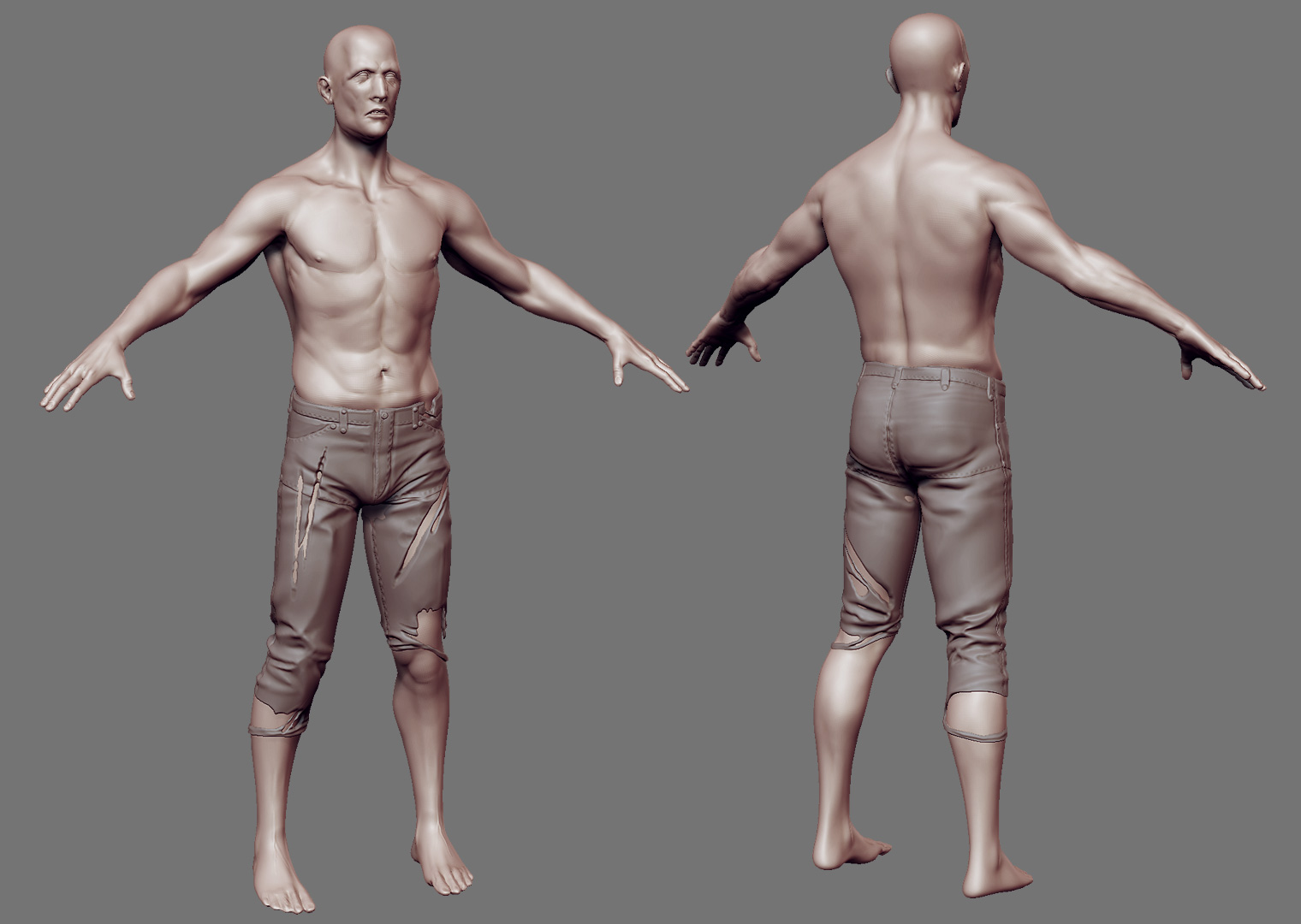 The first stages of the sculpture were looking great, however he was a bit too muscular for someone that roams the street stalking prey. The Necrotroph needed to look more like an agile hunter/predator as opposed to a burly man. The reference I turned to for his appearance and behavior was a Hyena.

Fun Fact:
"Hyenas make a variety of vocalizations including wailing calls, howling screams and the well-known "laughter" used to alert other clan members up to three miles away of a food source."

Another change we made was to his back. We felt that showing a deeper level of integration with the parasite would make the character more believable. Now by showing that the parasite had weaved itself within the host's rib cage and spine/neck, we felt it grounded the character more into reality and allowed us to hint at how the parasite was controlling it's host without having to flat-out say it. 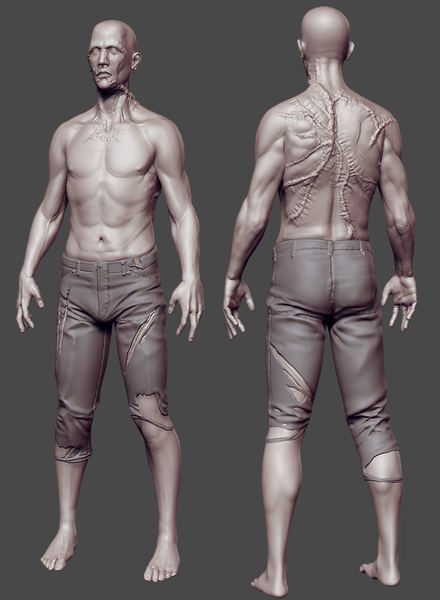 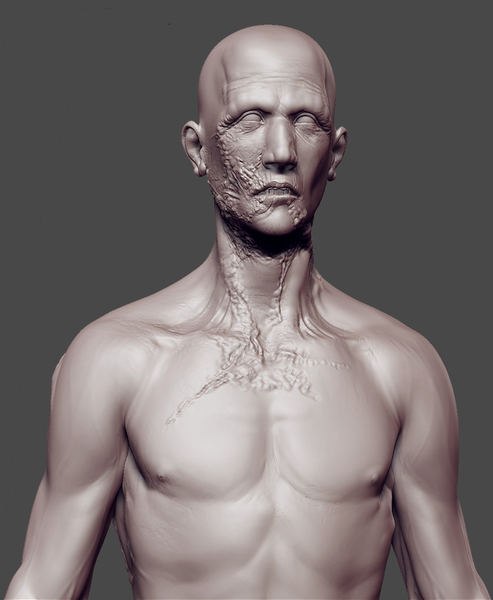 Now with a sculpt ready for texturing, Jonny went at it. 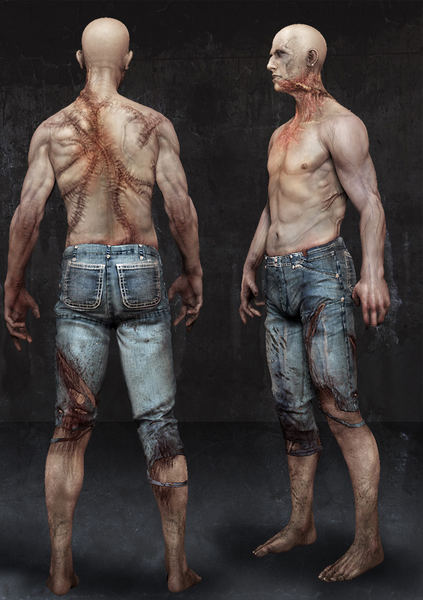 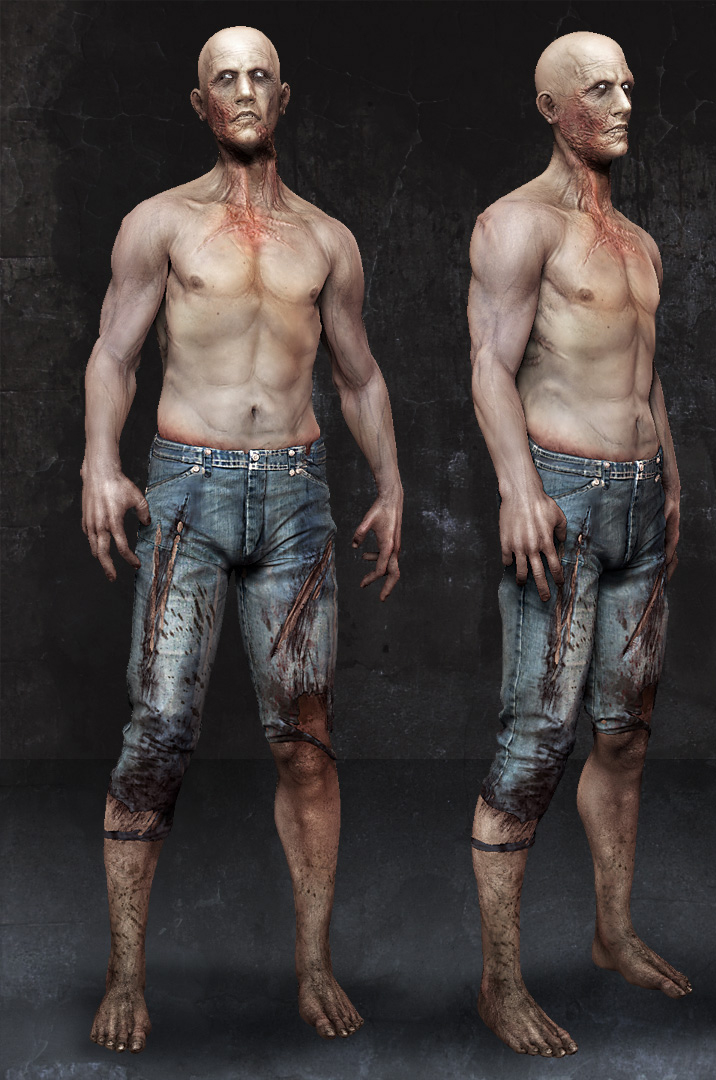 Sweet! Can't wait for this mod!

Boxes that make you yell! Awesome!

sweeeeettt this game is maybe not best but kind of best.

Good voice work, hope this does well for you.

I didn't like the "I need a glock clip" line. First of all, too specific. You're not going to be specific while you're in combat and panicking. And the way he said it, reminded me of the Tourettes Guy, which takes any and all seriousness out of the game. Shorten it up a bit, like "I need ammo" works just fine. ALSO in game I've noticed he says "I NEED 12 GAUGE SHELLS" Once again, too specific. "I need shotty ammo" works fine. I doubt you have much variation in gauges or shells and slugs in your game, so once again, condense it down. Ontop of that, when he was dropping the shotgun ammo, he switches it up from "Here, take these 12 gauge shells" which was way long, to "Here, take this shotgun ammo." which is what I'm looking for. No one needs to know the gauge, it's a game. No need to be specific.

Side note, because of not being able to edit my comment 5 minutes after, one hand animations are baaad. Get two hands on that pistol. Where's his other hand, stroking his shaft?

In a situation like this, you need to be specific. Not everyone is going to have the same weapon. Some people will run around with Glocks, Colts, Pythons, etc. It would be a huge waste of time if you need 9mm Glock 17 ammo and somebody gave you 45. ACP (especially during a firefight). This is something even the military/milita's do during intense firefights. Do you think some insurgent in Iraq says "Hey can I have some primary rifle ammo?" No, that just sounds stupid. He'll say "I need an AK MAG!" which is exactly how we do it in the mod.

It's one handed in this situation because he is firing from the hip, switch to ironsights view and it's two handed.

You need to work on the voice acting and the wording none-the-less, and you still haven't answered where that other hand is, or what it's doing. Case in point, you're going to look around like a moron if you run around with only one hand on your pistol. ALSO, with a shotgun, you don't only have to worry about what gauge the shell is, but what the size is also. There's certain shells shotguns can't fire because theres 2, 2 1/2, 3 inch shells and barrels and ect. If you give someone who has a 2 inch barrel a 3 inch shell, he isn't going to be able to load his shotty. That's why you want to avoid specifics in a video game.

Ontop of this, because I can't edit now, people can modify their guns to fire bigger, stronger rounds. Say, if I have a Glock, and I modified it for that it fires .41 AE, and someone passes me a 9mm mag because they automatically assumed that because I have a Glock, it fires 9mm, it's not going to do me any good, is it?

"and you still haven't answered where that other hand is, or what it's doing."

Does it really matter? It's like asking me where his feet are. You are not always going to be firing down the weapons iron sights, there are some situations where you need to run and shoot at the same time (the reason for the hip view).

I mean I guess it's possible for us to do this, but I can't imagine some rebel in Iraq says "HURRY KHALAD! I NEED 7.62×51 RIFLE AMMUNITION!"

So his other hand is on his hip? The hell? You said nothing about where the other hand is. Just that it's not there because it's "not in ironsight mode!"

Insurgents largely use AK47/AK74s and RPG-7s, so of course they're not going to have to specify.

I'm just saying, take what I said about being able to modify your gun into consideration, not every Glock is going to be 9mm, and not every shotgun is going to have a 2 1/2 inch barrel.

I would reconmend breaking it down into calibers, and just saying "shotty shells" instead of saying a gauge or anything of the sort.

Why you would modify your Glock and then ask for a standard clip (which would waste your time theirs) is your fault.

It sounds kind of like a waste of time for us to re-record everything just for this very rare special case that a Resistance member modifies his pistol (which you can't do in the game btw), doesn't it?

Hey, if I can pack a bigger punch to drop a necro, why not.

I'm just saying "I NEED A CLIP FOR MY GLOCK" sounds a little rediculous, and some of the lines need reworking.

I'm not trying to bash your mod, I'm trying to tell you that it's coming off as odd to me, and maybe others. I like your mod completely, it's just the voice acting needs some tuning

Requesting ammo lines are the only ones that are throwing me off, really. Just mainly the way he says it. There's some parts where's there's a short pause in his sentence, for instance I hear it as "Rally, on me." (:41 for example) Instead of Rally on me. They're small things but if you fixed them it would help with the immersion. You need to stick with a staying in-combat sound, or have two voice menus. One for combat and one for inbetween. It be doesn't make sense if someone's like "SAFTIES OFF!" then whispered "I need some ammo"

Why would you yell "I NEED AMMO!" in such a hostile environment like this? Especially in a multi-player game. For some phrases we made them louder depending on there use and the situation. If you are about to be attacked by a group of necros you would pobably want to yell that out, right?

By combat I mean guns blazing, already accessing the target.

<GoodInterfaceDesign>Please lock your mouse bounds to the edges of the interface and hide the mouse cursor. It will be much more user friendly and easier to use that way if you can just hold a key and fling your mouse to the corner you want. It should also be a hold, not a toggle to bring that up.</GoodInterfaceDesign>

I know this isn't what the video's showing, but the viewmodels look fantastic.

I want it! This looks awesome!
The features are really interesting, and I am sure they will give an overall great experience!