A worded process on how I recreate the particles and fx used in Dawn of War 2 for Dawn of War 1.

Wanted to make an explanation for how I recreated the particle effects found in Dawn of War 2 and implement them into Dawn of War 1. Note that this isn't a tutorial, rather just a way to visualize how much goes into making Dawn of War 2's Fx. Special thanks to the Dawn of War 2 Elite Mod forums as they helped answer my questions on how to get the FxEditor working for Dawn of War 2. Without them, I wouldn't have been able to recreate these fx.

The FxEditor for Dawn of War 2 is nearly identical to Dawn of War 1's own FxEditor which I use to make the particles for Redux. This makes recreating DoW2's Fx very easy as the process mostly requires me to simply copy and paste the variables that make up the blueprint for how the fx are built into DoW1's FxEditor. Although it's easy to do this, it is however VERY tedious. Even though both programs have the same layout, DoW2's FxEditor has more modern features that DoW1 lacks which means you won't be able to recreate the particles with 100% accuracy; features like animated textures, randomized textures, randomized duration times, controlled emitter directions and MUCH more. Because of this, I have to find workarounds to these features that involve a lot of testing and sometimes there are situations where copying everything down might result in your fx not looking anything like how it looks in DoW2 and requiring further tests.

Before going into how I go about making these fx, here's a brief explanation of each of the FxEditor's particle features to provide further context:

Dawn of War 2 implements a very clever usage of spray particles within the framework of their fx that DoW1 just doesn't take advantage of. Spray particles are primarily used to emit multiple textures in an instance but they can also be used to time when a particle is being displayed. Every particle by default is being displayed by the 0 mark, meaning that most of Dawn of War 1's fx are one singular instance of all of its particles being displayed. Using the power of sprays, DoW2 can layer its fx with particles that emit at a further point in time, giving their fx a more animated feel to them.

Just a quick mention of the color info. Every particle has a color chart that controls what color the particle will display as well as how transparent the particle is. I mention this as both programs operate differently with DoW1's color input being in RGB (0 - 255) and DoW2's inputs being in percentages (0 - 1). This means that every Red, Blue, Green, and Alpha variable that makes up a single color has to be calculated by multiplying the percentage by 255 to get the actual color needed to be used in DoW1's FxEditor. DoW2 also has time information for when a color is being displayed which DoW1 doesn't have, meaning I have to predict where on the chart the color will occur.

One of DoW2's best features for constructing fx has to be its animated textures. To do this, DoW2 uses a texture map that displays all of the frames of its particle's animation in a sequence. The FxEditor displays each cell one by one to simulate animation. Although Dawn of War 1 lacks this feature, I've found a workaround that can mimic this component, albeit very soul crushing and tedious. To do this, I extract exactly 8 frames from the animated texture map and save them as individual textures. I use 8 as that's the amount a Combo can hold (16 for VERY animated particles that use a lot of frames). 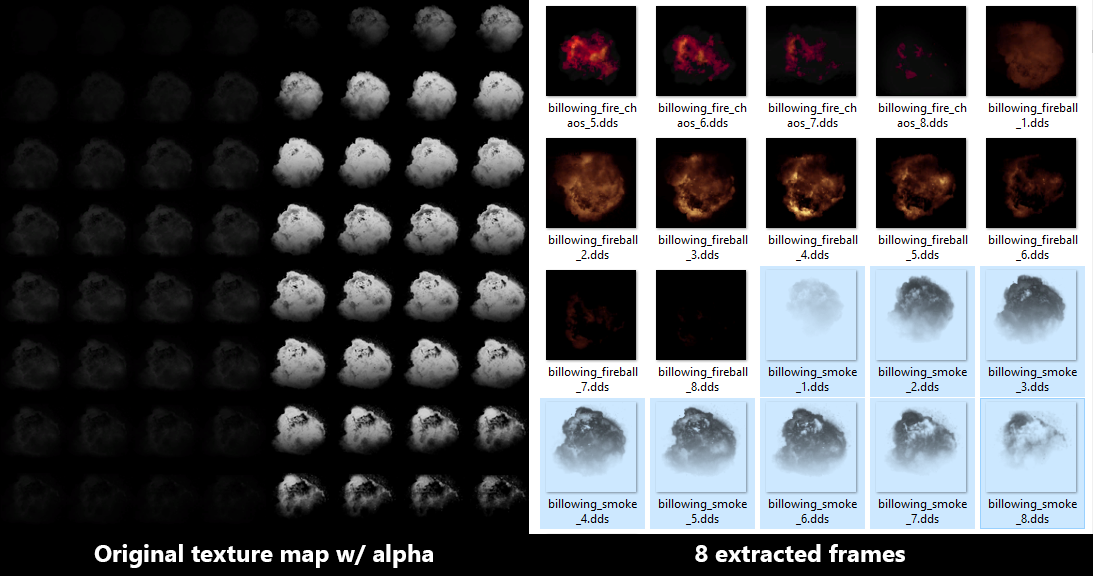 I will make a single Ring particle (or Beam depending on what the particle is) within a Combo and mimic all of the data DoW2's particle uses such as size, color, offset, and so on. After fulfilling this, I will then divide the color chart into eight (9 or 10 frames depending if the first or last frame is invisible) sections to represent when each frame is displayed.

After mapping where the frames will occur, I'll then copy the Ring particle 8 times in the Combo until it's completely filled. Then, I will go back to every Ring particle and black out or remove every frame on the color chart until one is left being displayed and switch the texture out with the next frame. I'll do this until every Ring particle has its own frame being displayed one after the other, thus causing the texture to fade in and out from one frame to the other to simulate animation. The final result will make an animated particle.

Another unique feature of DoW2's FxEditor is randomized particle textures. This also uses the same cell-based texture maps that animated particles use except instead of switching from one cell to another to simulate a moving picture, the FxEditor will instead randomly pick a cell and use that to display the texture. This is primarily used in Sprays and it helps make the fx look less stale by showing multiple versions of what is essentially the same particle. This one is much easier to implement in DoW1 as the solution to replicate this is to simply multiply the spray into how many textures it'll randomly generate and divide the Spray's rate so that it evenly emits the same amount of each texture.

Thank you for your work!

How exactly do you get FxTools? I can't find it anywhere.

They're in the Dawn of War Mod tools.

Howdy! Is there any chance getting standalone updated FX? I'm just feel that i don't really need rework of vanilla units, it seems strange to me that this beautiful work can't be separeted from base mod, or it can be? Thanks for reply!