The sheer enthusiasm and overwhelming response to this mod has provoked me to continue working on it...so here's a list of current planned features for Version 0.2!

The sheer enthusiasm and overwhelming response to this mod has provoked me to continue working on it...so here's a list of current planned features for Version 0.2.

Currently, I have completed the Black Numenorians for Mordor (seen below) and nearly finished the rework of Lamedon's units, which will be more in line with GW's units, in addition to some of the smaller changes. Hopefully it won't take too long, but I know that every time I say that, it takes too long - so just be patient for now and keep leaving your feedback, as I enjoy reading what you guys think of the mod and how you think it can be improved. What would you like to see next? Did you find any bugs? What did you like, and what did you not like?

Either way, the next update will likely feature the new Lamedon units, so keep a big, red eye (haha, get it? Like the Eye of Sauron or whatever...) out for more in the future. For now, enjoy looking at this hard-to-make out and somewhat crappy troop tree image of the newly-finished Black Numenorians (you can find a description of them on the actual image's page, here on Moddb): 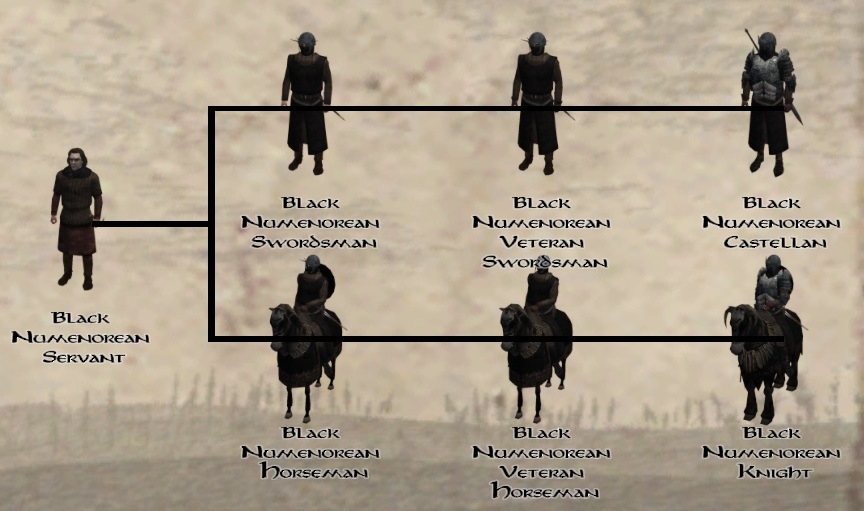 Exactly what I always wish I could do. And there is so much movie material to reference, but it is even more amazing when you actually replicate it like this.

If I may give a suggestion about the next faction idea.
Make Harad, cuz according to me Rohan looks very film-acceptable to me. Except the royal guards I guess.
And perhaps make a elven/dwarven one? Since they still lack new stuff? ^^

Harad is the next faction that I am working on, and Jurek is working away at another. I would like to do Rohan - Isengard - Dunland next and work my way north, but I agree that Rohan currently looks acceptable. A lot of people are requesting the Elves so I might move in that direction next...maybe Greenwood, as I quite like playing them.

I actually just recently got working on porting Jurek's Arnorian troops to this mod since he joined the project, so Arnor might be released in an early stage with the next release.

Horribly ironic but thank you nonetheless! The images will come once Arnor actually enters a proper stage with all armors and weapons replaced.

Could you make the Isenguard and Mordor Orc/Uruk/Uruk-Hai character models, look good?

That is planned in the future. The Orcs are all redone already.

Would you be able to make the forest of Mirkwood so it doesn't look like a tornado ripped through it?

Yes, but I think I'll keep it the way it is for now. If I make the trees too dense, you won't be able to spot parties in it.

nice work. can u make the lothlorien elves more like the elves battled in helms deep?
i think the elves from helms deep are actually the ones from lothlorien

That's the plan. Those are indeed the Lorien Elves, so yes, they will look that way when I get around to them. There will likely be optional textures included to recolor their robes to the red seen in the movie as I may be giving them blue robes to match their faction by default.

Just wondering if you use In Vains scene's?

Is it dead or is it still in development?