After a nearly 16 year (!) silence, I've decided to make an announcement: This mod is no longer dead.

For those who've never heard of this mod, this was a mod that was released in late beta Dawn of War, that tripled the unit cap, during a time where there were dozens of different "Unlimited Unit" mods in the wild. The problem with this was that it would make unique units (ie. Commanders, Squiggoth, etc.) obsolete, and made the orks disturbingly overpowered.

The reason why this particular mod was so successful was because I made the point to keep the game's original balance by tripling everything; income from capture points, unit and vehicle caps, unique units (3 commander orbital bombardments? Yes please!), and the like. Keeping the relative balance made the game a lot of fun to play, and could even be used in the campaign if installed into the W40K folder. It was helped from a brief mention in the February 2005 (#133) PC Gamer (under the now-defunct totalwar.moddb.com URL), though I'm sure it would have never made it if not for the 20,000 downloads it had gained prior to it (which was a huge number for 2005). I also added an Imperial Guard faction with what units the game had, just for flavor and entertainment, which was a fairly popular addition.

This mod was continuously updated for Dawn of War, and later a sister mod called Total War: Winter Assault was made to work with the standalone expansion. However, this version had a major problem; Relic had decided to rebalance the units, meaning that I had to redo the entire mod from the ground up. Although this wasn't a massive task in the grand scheme of things, it was a lot of extra work.

On top of that, the rebalance put a hard-cap on the Land Raider, something I really disliked in Winter Assault. Because of this (and because I'm a huge fan of the Imperial Guard Baneblade), I decided to rebalance both the Land Raider and the Baneblade. Land Raider was pretty easy; I literally ported the Dawn of War stats, and it worked just fine in terms of balance. But the Baneblade I was finding absurdly weak for its size and reputation. Therefore, I jacked up the cap hit to a whopping 15 vehicle cap, jacked up the requisition costs, and also gave it enough firepower to equal 15 cap hit's worth of vehicles. In later testing, I found that four of these tanks (which is 100% of the triple vehicle cap, don't forget) could just barely hold their own against an equivalent tank army from an opposing faction. It really made the Imperial Guard a treat to play.

Then Dark Crusade came out. And again a rebalance.

At this point, my interest in Dawn of War waned to the point where I wasn't motivated enough to try to push out a triple-cap mod for Dark Crusade. Although I did eventually complete it, it was never released, and only one lucky soul (who e-mailed me asking about it) got a copy of the mostly-finished mod. And that was that.

However, it has been in the back of my mind ever since; the urge to want to come back and finish what I started. With Warhammer 40K games having a resurgence (and a pandemic's worth of free time to sit around waiting for things to happen), I realized that this may be the perfect time to bring this back, release tweaked versions of DoW:TW and TW:WA, release TW:DC and TW:SS, and perhaps go as far as do a full campaign and unit rebalance, to make it truly epic.

Thus, here is the roadmap for development; I expect this to be fully completed by the end of 2021 at the latest, but I also know that a lot of this work is pretty easy by modding standards:

At this point, the mod would be effectively "up to date" with the original intent. However, depending on how I feel after this, I may continue with this "stretch goal roadmap", including the following rebalance tweaks I'm proposing:

- Giving 100% accuracy to anti-tank base defense turrets, and setting them so they can hit any direct-fire (ie. tanks, walkers, etc) vehicles without being outranged by them. They will likewise be buffed. In the original meta they were practically useless.

- Anti-infantry turrets may see a small buff to firepower, but a big buff to hit points.

- To compensate for the buffs to defenses, artillery will be given a far greater role, by greatly increasing their firepower (my biggest complaint is that artillery would rarely kill, but mostly fling troops around and rattle tank crews), and slightly increasing their range. Although I haven't played Soulstorm and haven't played Dark Crusade in 15 years, I have some ideas on how to go about this;

> For the Space Marine Whirlwind, they would move slightly faster, be somewhat more agile, and have a faster lock-on time, for shoot-and-scoot tactics. They would get a small to medium firepower improvement, but their weakness will be that I will be greatly nerfing their hit points, meaning even basic infantry with heavy bolters could take one out.

> In comparison, the Basilisk will be given a substantial range boost, and its artillery strikes will dominate. However, it will be very slow to move, very slow to steer, and extremely vulnerable (it's open-topped, after all). This will likely also get a pretty big cap boost to compensate for its improved lethality.

> In all cases, these will be primarily intended to support a major advance, and/or attack heavily fortified base defenses (which, with the new meta, should make it very hard to attack a base head-on. Think of Starcraft's Siege Tanks against a heavily fortified Proton Cannon grid). These would also be given long reload times compared to the current standard. For the other races, I'll have to see whether they have artillery units or not; if they lack them, I may have to add a unit to take that role.

- Something that I will likely slide in with the first timeline is tweaking how infantry units are spawned; by copying some of the existing unit types, I plan on creating sub-variants of certain types units to make it easier to deploy. For example:

- I plan on going through every campaign mission (where feasible), and make tweaks if necessary to ensure that pathfinding doesn't get too bogged down due to the massive unit counts. In addition, I will look at any mission scripts and see if there's anything that can be done on the AI side as they sometimes don't utilize the craziness the mod otherwise provides.

To end this update, I'll add a fun little screenshot I took, using the same mod version I created in 2005; a bit buggy, but more or less works great even in 2021: 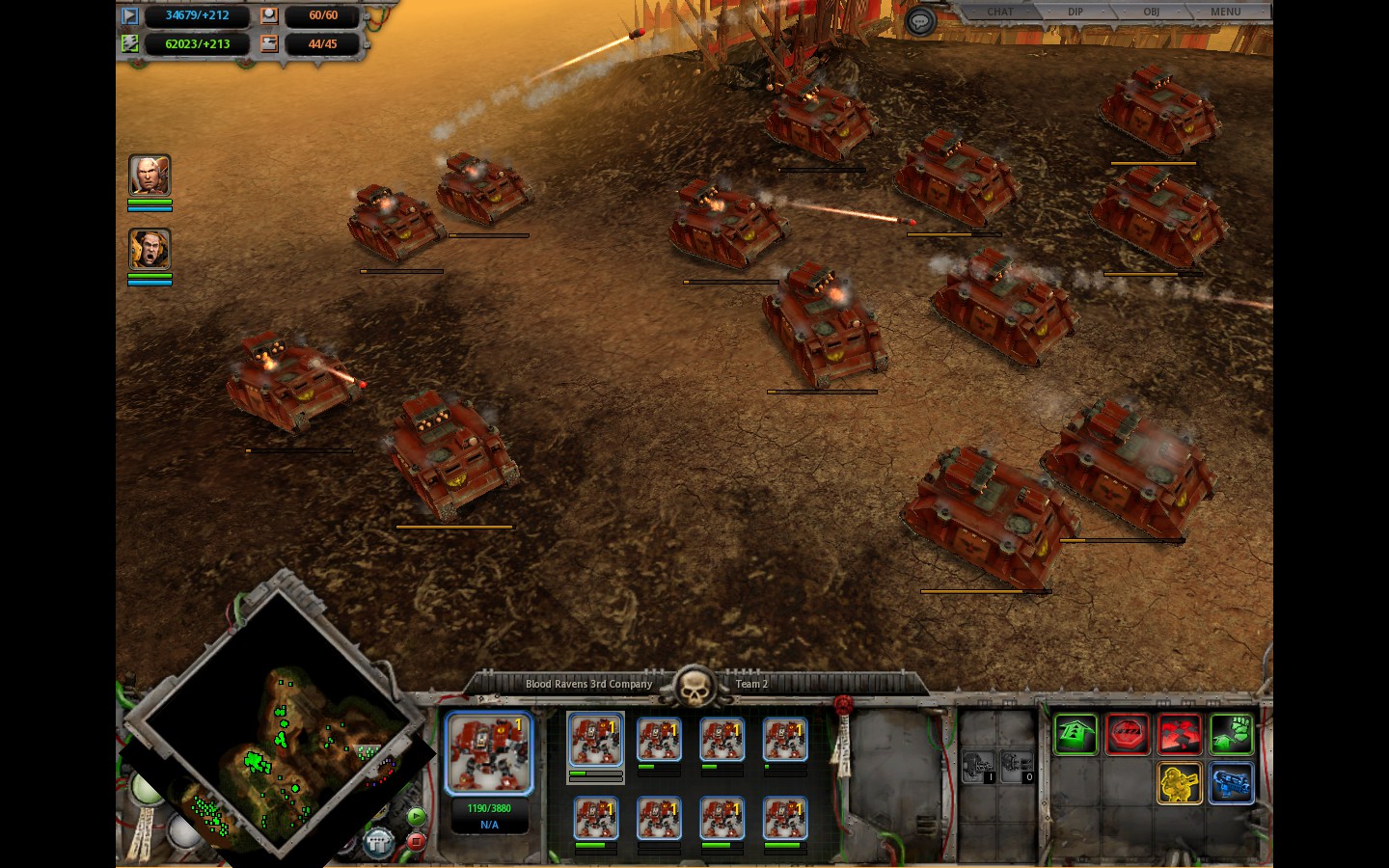 Seems the AI here is using the extra unit cap with an absurdly frustrating number of Lemun Russ's in Campaign Mission 4: 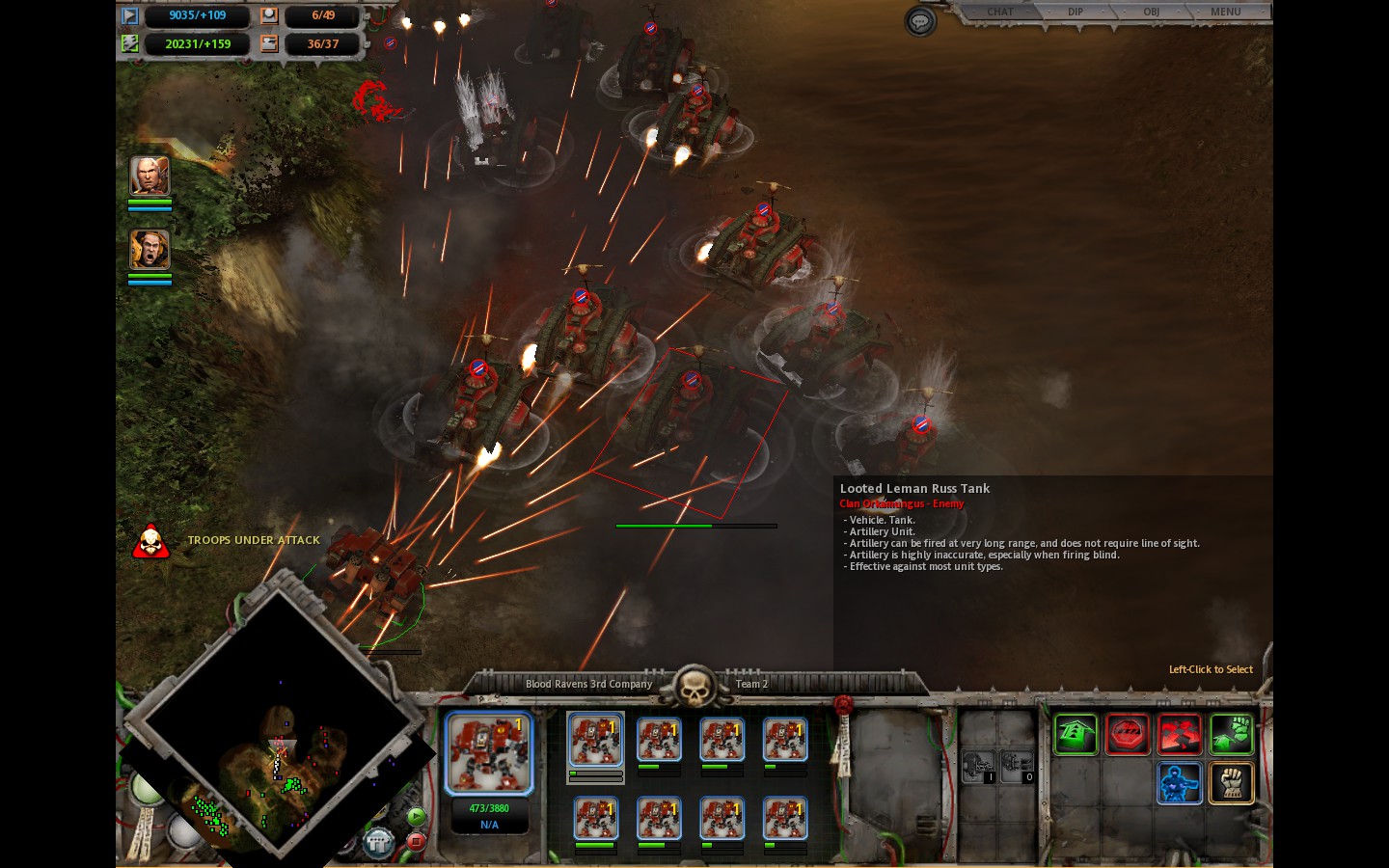 Remember what I said about the orks being overpowered in other mods? I could barely hold the line in this campaign mission with the rudimentary unit restrictions: 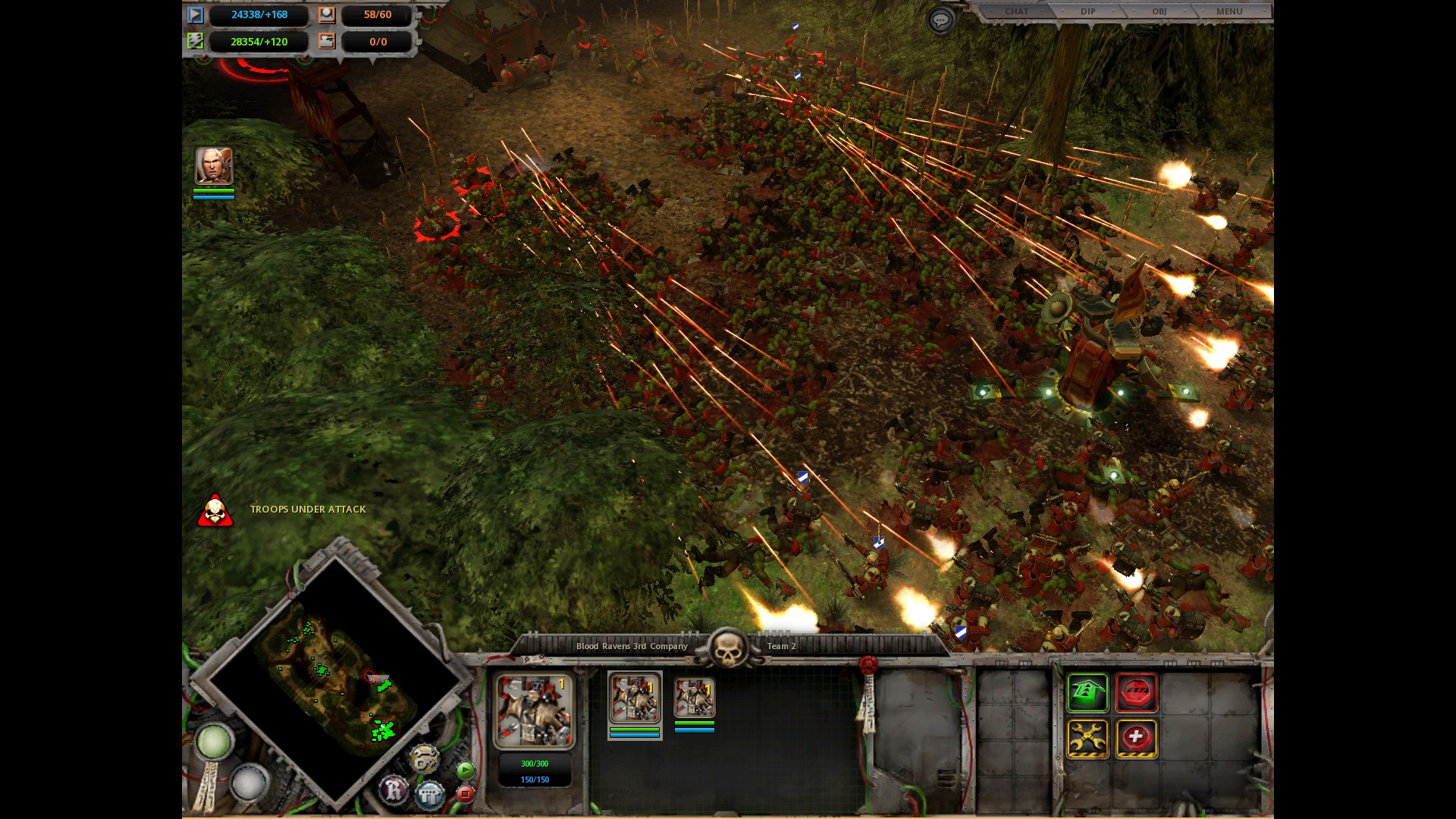 (Note: Excuse the glitchy minimap UI; this is an issue with stock DoW, and something I *might* be able to address down the road)

If this sounds interesting to you, let me know! Want to help? Feel free to reach out, would love your help! And if you're an old fan of this mod? Thank you for supporting it way back when. :)

Suggestions for the rebalance is welcome, though the only thing I will NOT be changing is the 3x cap; even with 3x cap most of the time the map will be flooded with units. Trust me. :P

After playtesting DoW:WA today, it reminded me the Basilisk doesn't need range changes after all; though I'll need to confirm in skirmish, it seems that the Basilisk already has really long range. If anything, I may need to nerf it a tad.

Hmm
"i will watch your progress with great interest"