Post news RSS The origin and development of RIPQ

Rest In Peace and Quiet (or RIPQ, henceforth) began as a single-player sneaky zombie experience controlled with the Leap Motion. Players are tasked with guiding a zombie away from the influence of a necromancer, so that the zombie can return to its gravestead and enjoy the eternal sleep of death.

Rest In Peace and Quiet (or RIPQ, henceforth) began
as a single-player sneaky zombie experience controlled with the Leap Motion.
Players are tasked with guiding a zombie away from the influence of a
necromancer, so that the zombie can return to its gravestead and enjoy the
eternal sleep of death. At this point, there were two mechanics in the game: a
red-light, green-light movement system, where the player’s hand orientation
dictated whether the zombie was moving or not; and a dynamic punching system
that kept flesh-hungry crows at bay. 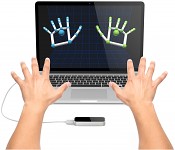 The team realized that these mechanics alone were not enough
to sustain the game for an entire production cycle, and so we returned to studying
the motion controls. From player feedback, it became apparent that punching was
the best-feeling action in the game, due to the combined feedback of scattering
crows, screen-shake, and the physical sensation of driving one’s fist. This got
the team thinking about the physical nature of the Leap Motion controller. What
if all actions felt as weighty and satisfying as the punch?

It was then that we conceived of having two players use the
Leap Motion simultaneously. The two players will fight for control of the
controller itself, in physical space. What could be weightier than another
human being wrestling you? Of course, this idea raises numerous problems. How
can the two-player aspect be adapted into the existing game, without completely
scrapping what we have? How will the physical aspect of the game be regulated?
Will people really want to play a game that’s about fighting your friends in
real life?

Over the next two weeks, a multiplayer prototype was
created, where two players competed to input a number of gestures with the Leap
Motion before their opponent can do the same. The feedback we received
indicated that people were actually quite taken with the idea of a J.S. Joust-like full contact experience,
though people also indicated that the gameplay seemed too shallow, consisting
mostly of wrestling. The cooperative aspect of the game was born from this
need.

In the final conceptual stage of RIPQ, two players play as ethereal forces reanimating a zombie, and
they must cooperate to guide the zombie to its grave. Each player has access to
certain gestures that affect the zombie’s movement direction, which are more
effective when both players execute them in tandem. Additionally, certain
actions can only be achieved when players make matching gestures
simultaneously, such as jumping, or performing a more powerful punch. Players
must complete certain objectives to get to the zombie’s grave, such as taking a
key to a locked gate, or filling an obstructing lake of blood with leeches.
After these challenges are completed, the players are put in opposition to one
another, each trying to lead the zombie to separate locations. The player that
manages to reach his or her location is the ultimate winner of the game.

The team’s focus is currently on the issue of making
controls less finicky for the players. In the coming weeks, we are blocking out
the game world, as well as implementing the cooperative objectives.