Announcing the first release of The Great War 1918 modification. In spring 1918 a vast German offensive broke through the stalemate on the Western Front. Now 95 years later these events are portrayed in CoH.

War has been going on for 43 months. The Western front changed little on the map since the Entente's armies stopped the German onslaught on the Marne river in September 1914.
War never changed so much in so little time; the glorious rifle-armed battalions of 1914 charging through the wheat fields of northern France had given way to small squads of specialists armed with grenades and light machineguns, crawling from cover to cover in the mud of no man's land. Planes brought warfare to a new dimension, and the tank had made its entrance on the scene. There had been no shortage of ingenuity when it came to finding new ways of killing the enemy, from heavy howitzers to flamethrowers and poison gas. New offensive tactics brought short victories followed by bloody defeats as the defensive caught up in an endless cycle of innovations and counters.
And yet despite all this, the stalemate of trench warfare was still going on...

At 4.40 in the morning a violent barrage fell on the lines held by the British 5th Army. In its wake followed waves of German assault troops, small elite units of specially selected soldiers trained and equipped for a single task: to break through
As the spring Offensive punched deeply in the old trench systems, armies once again fought over the open fields and villages of northern France and Belgium.
Far away from the shelter of trenches,

soldiers entered the last yet bloodiest year of the war.

While the mod's main goal is to represent the First World War, we decided from the start to specifically portray the Western Front and the period going from 21 March 1918 to the armistice, or more precisely the Spring Offensive, the second battle of the Marne and the Hundred Days offensive.

This allows us to integrate as many different weapons and vehicles as possible, while keeping a consistent timeline in regards to uniforms and tactics. It also makes fighting on stock maps more believable as in 1918 there were plenty of engagements far away from trench systems, from the flat fields around Amiens to the streets of Cambrai and the deep woods of the Argonne forest.
It also makes the specific gameplay of Company of Heroes easier to adapt as by 1918 advanced small squad tactics had already been well developed and refined by all belligerents.

To commemorate this significant date we announce The Great War 1918 mod's first release for this Saturday!

Features:
- a balanced gameplay focused on the particularities of the Great War, with trenches, poison gas and melee
- an accurate representation of 1918 armies, with new weapons, vehicles, artillery, planes and uniforms.
- two factions: the German Imperial Army and the British Expeditionary Force
- both single and multiplayer (including automatch) are available. It will not include a campaign however
- a no pop-cap skirmish mode called "Grand Offensive" has been added
- BuckyBoy's cheat mod has been integrated and will be available when playing in dev mode.
- full translation in German, Spanish, Polish, Russian and French
- Two new maps: Fromelles and Villers-Bretonneux

Villers-Bretonneux
A map by TheSphynx

The rural town of Villers-Bretonneux managed to escape most of the war unscathed, with the airport in the neighbouring village of Cachy as sole reminder of the war going on. However when the German spring offensive crashed trough the entente lines in March 1918 the town suddenly found itself on the frontline. While a first attack was repulsed by British and Australian troops, the Villers-Bretonneux fell some weeks later, only to be recaptured by the end of April.
It is however an event on 24 April 1918 which made the battle famous. As three Mk IV tanks advanced in support of a British counterattack they suddenly found themselves face to face with a German A7V, thus sparking the first tank versus tank battle in history. 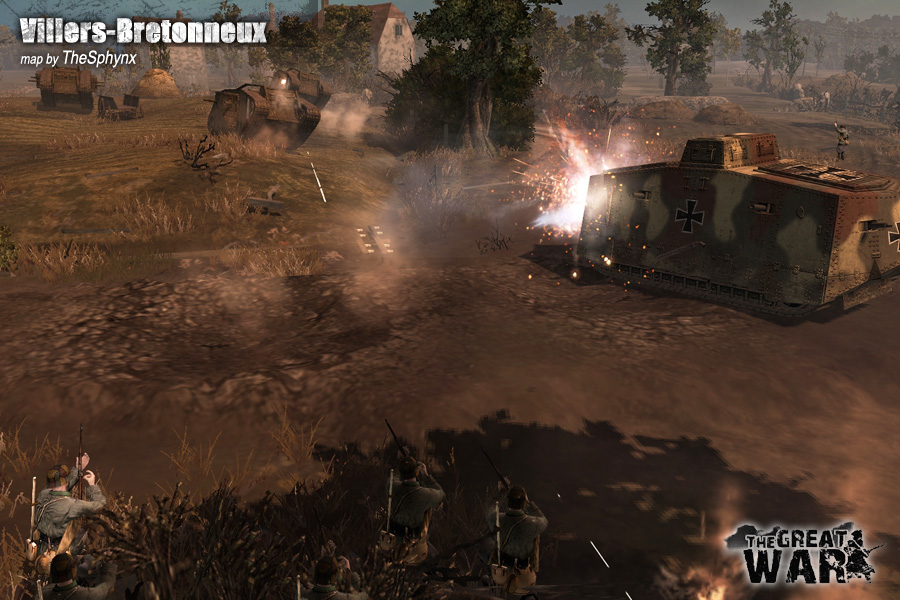 This 4 player map depicts the village of Cachy, 2km away from Villers-Bretonneux. Most of the map is covered by fields and fences, with some village buildings in the centre. It has plenty of covers for infantry, but some obstacles might make navigation difficult until ploughed through by tanks. 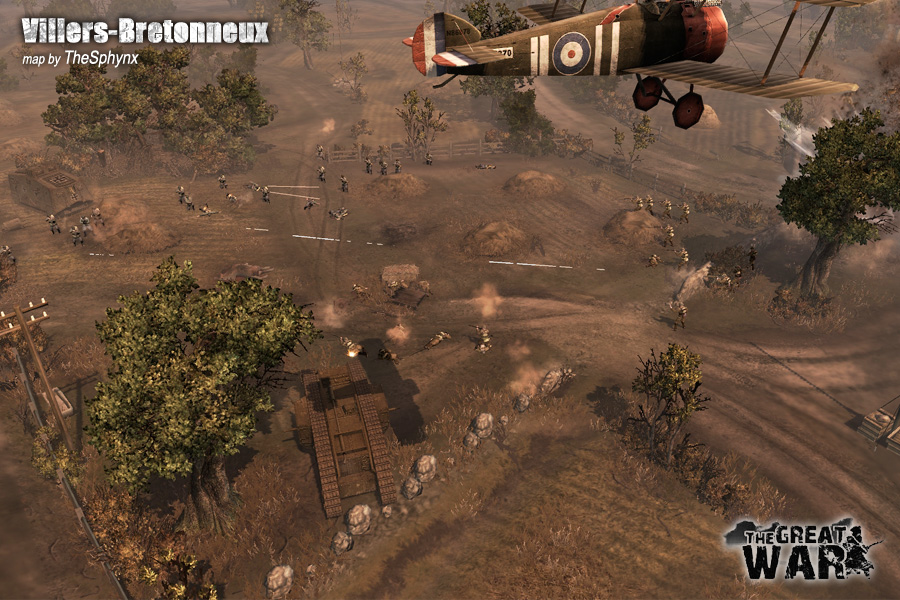 Fromelles
A map by MonolithicBacon

This little village had some famous occasions during the first world war. On Christmas 1914 enemies joined between the trenches to celebrate and have peace.
It had been part of the German defence for two years when in July 1916 the Australian 5th division was ordered to make a diversionary attack on it during the Battle of the Sommes. What was the ANZAC's first mission on the Western Front turned into a disaster and one of the bloodiest day in Australian military history. For most of the war the ruined remnants remained firmly in German hands. 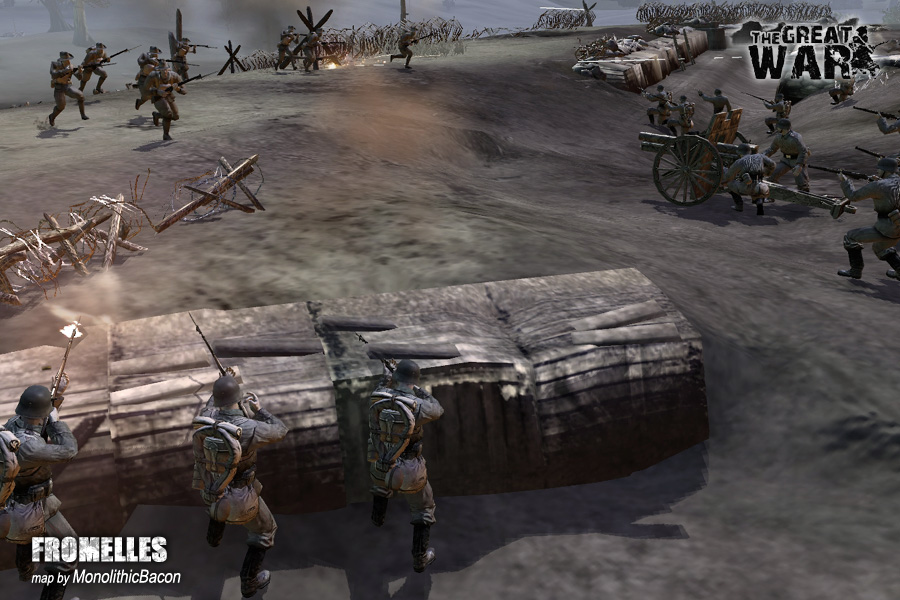 This 4 player map features two opposing lines of staggered trenches separated by no man’s land with few covers; infantry operating alone, without support, will not survive!
The bases are situated in some burning forest and ruined farms behind the trench lines.

The trench lines of each side connect a medium fuel and a high munitions to the base sectors of each player. Loosing control of the trenches or the resource points will bring big trouble, so make sure both areas are protected.
On this map there are four victory points: one for each player side and two in no man's land. You can win the game by just holding the no man's land or conquering the enemy trench system. The choice is yours! 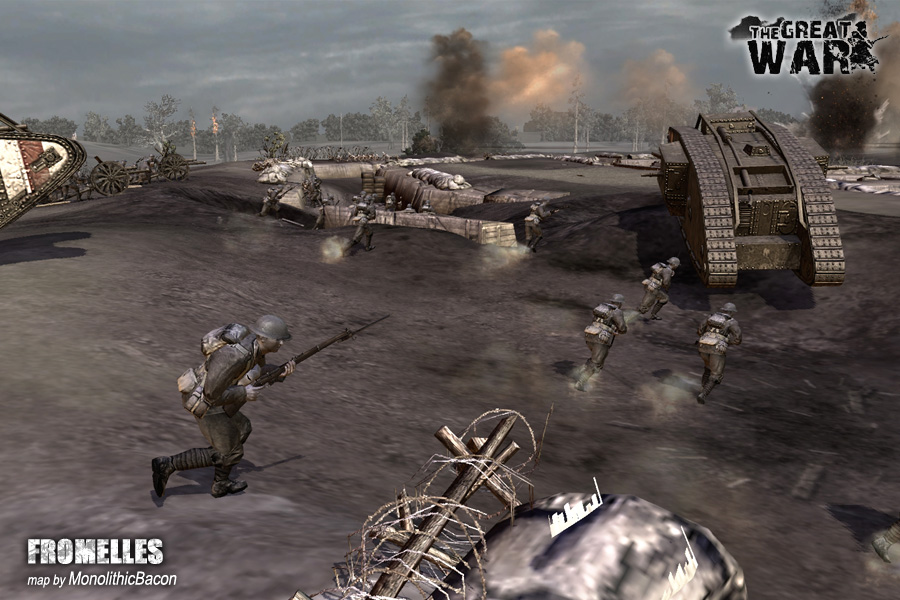 I eagerly await crushing the enemy under my armored treads!

excellent , looking forward to this.

Did this mod happen to beat the WWI Mod for MoW in terms of release? Just out of curiosity.

AMAZING!! I can't wait to play this mod!

Another reason to look forward to this saturday!!!!!! :D

Yes! Actual Australian troops in the third screenshot. This pleases me.

It's time to bunker up with chips and soda!

I can't belive it, a release date! Excellenr work guys! ;)

I knew the day would come eventually.

Hell, its about time

You have got to be joking.... I'm leaving tomorrow morning -_- Well have fun gents I will look forward to this

I'm sorry to hear that. Have a safe trip at least!

Look at the bright side: you won't have to deal with the inevitable bugs that come with first release. It'll be a new more stable version by the time you return ;)

coincide with a historical event and a weekend?
don_durandal, you are a genius. Thank you.

so there arent't po cap?

Population is capped by default, like in the vanilla game.

A skirmish mode that removes the cap has been added though.

Zee germans are coming! And so it begins. #Awesome

I think you can download it on Moddb if they release it but you have to wait at least a few hours its not saturday yet ;D

yes, I have been waiting for this. finally a mod worth playing

Hi
I got a problem; When i want to play Multiplayer and disable filters, all servers are grey, and it says incompatible mod ("them: reliccoh you: reliccoh)
normal Coh multiplayer works fine.
Is there any update for The great war or something? I got 1.0 installed.
can anybody help?
MFg Smiley

i wish they could add French, its a bit weird to not have French faction for this mod... but great mod and fun to play ;)

Read the description of the mod.

ok so i instaled and now its saying canot connect to media so i cant play :( o LOVE ww1 and yet i still cant play.

That's because the Relic servers have been shut down. It's a CoH problem that has nothing to do with the mod.

To play you need to insert your CoH installation disk. Otherwise, if you want to play online and keep CoH up to date, install the new steam version.
See here on how to do that: Help.sega.com