Post news RSS The Haunted is back! Version 2.0 Announced!

No rest for the wicked! Trailer, screenshots, infos and release date for The Haunted 2.0 Featuring coop, new maps, characters, weapons, monsters and more!

The new version for the 2nd placed MSU Contest winner is coming soon!

After long and painful months in the development pit, the haunted team finally managed to escape the depths of hell to unleash a fast and furious survival action game.

New maps, monsters, weapons and gamemodes including coop and humans versus demons are among the new features. And nearly every aspect from the previous version has been improved and tweaked to provide the best possible experience.

But enough with the words and on with the new media.

Trailer(Make sure to watch in Hq): 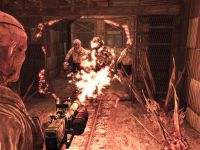 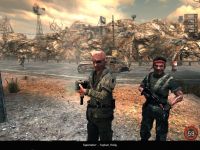 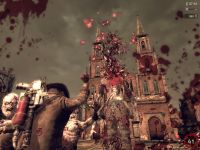 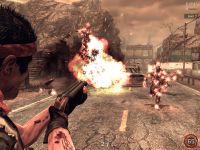 More new pictures can found in the media section!

We are looking for people who want to host game servers for the haunted.
If you are interested, just drop by in our IRC channel.
#HauntedGame at QuakeNet

Now watch our developer walkthrough to be ultimately prepeared for the slaughter!
The Haunted Developer Walkthrough

And on May 2nd, everyone is invited to the release party in our IRC channel. See you in Hell!

Special thanks to Nervous Energy for hosting our beta test server and uploading countless patches!
Nervousenergy.co.uk

Thanks to everyone who helped testing.

Looks incredible. Amazing how much new things you've added. And such a small team! Incredibly well done all of you :)

Looks so impressive. Too bad it's not available for the PS3 Version *sniff*

Man. That trailer had me smiling the whole time. Can't wait!

Amazing. Look at all those improvements. Loved the first version, and look forward to this one!

I digg the dedication you put into this mod. Still making the game better and I think becoming a serious competitor in the competition, now!

amazing....
will love to play it with my germanb friends :D

Nothing short of amazing.

Just to get this straight, if me and my friend want to play this but on the same team (humans) we could play coop and just kill all the zombie douch;s right?

Wow, This mod is taking a small turn to madworld. AND I ******* LOVE IT. Oh my god, As if this mod couldn't get any better. This is, Single handedly, THE GREATEST UT3 MOD EVER. Thats not even a huge award though since the modding community is so small. But Here is a better award, this is the MOST OVER THE TOP ACTION BALLS TO THE WALL SHOOTER EVER TO RUN ON UNREAL TECHNOLOGY. God damn you guys kick ***. However my keyboard is out of breath so thats all the praise i can give you today.

Resident Evil + Pain Killer + top down RTS game...
Amazing mod you got there :]

Can't you slowdown that back-rolling animation and make it go less far? Seems like the players are teleporting a few meters aways.

Damn, it´s gonna be the 1st place Mod in MSUC. Love the 1st version of Haunted, but this once looks great.

This mod is amazing. Not so many mods out there which is as good as this.

I hope you will make some variations on the appearance of the zombies though, it would look a lot awesome. And where or when will there be a female survivor? :P

Awesome! Thank you for all those changes ^^

i think there were only two AWESOME mods for ut2k4, kf and alien swarm.
and so far this is THE mod for ut3, actually even the first release was grand, not many devs are capable of building such fluid gameplay and even expanding it with niceties like that little rts touch.

you have obviously never played Ballistic Weapons for ut2004 then.

you obviously have no idea what the difference between a total conversion and a mutator is.

Does this work with the steam version of UT3?

Cool, thanks, great game btw. Also how would we install it for the steam version?

this is a very fun mod,i recommend it!

Hell yes! And I thought the first version was good. THAT LOOKS F**KIN EPIC!

damn this is so awesome! im gonna download right on release!!!

Alright, I'm definately going to be playing this. I knew 1.X even had HUGE potential.

Any chance there will be the capabilitiy of allowing more than 4 people to play coop with objective-style maps that mappers can define? Much like Zombie master. Objective style maps are pretty fun in zombie games as demonstrated.

Congrats to the team, keep the good work!

This is a HUGE step up from the current version. I LOVE IT!