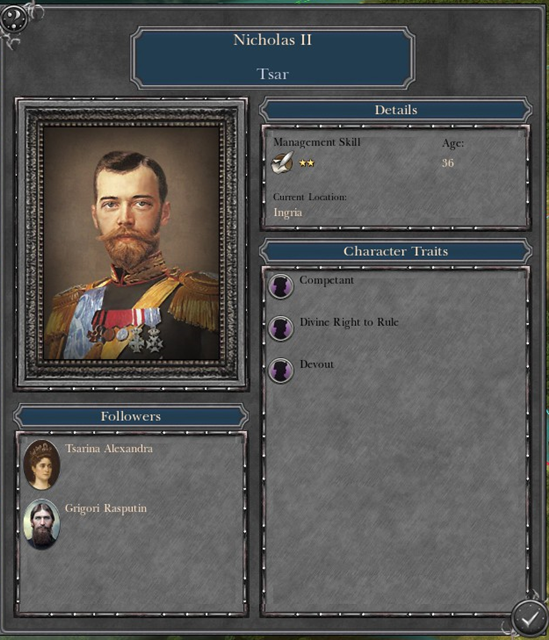 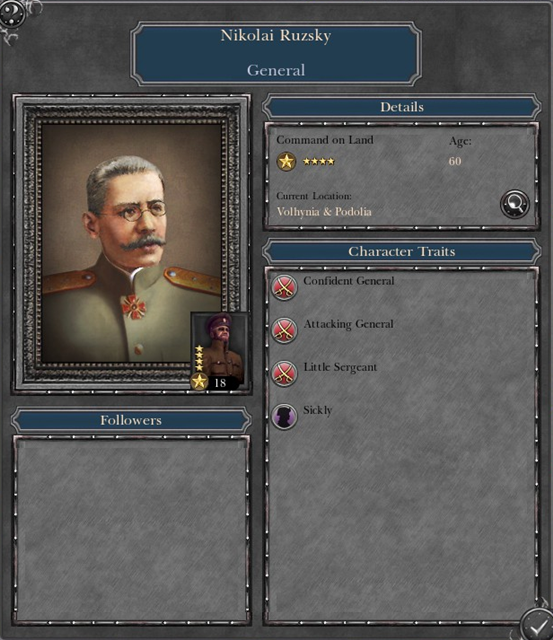 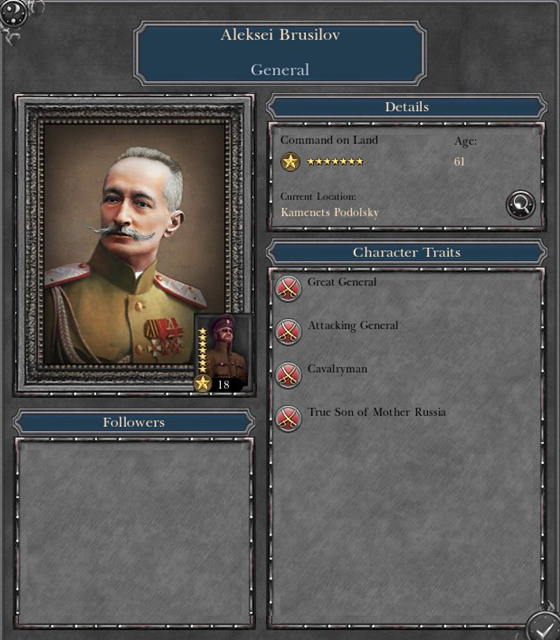 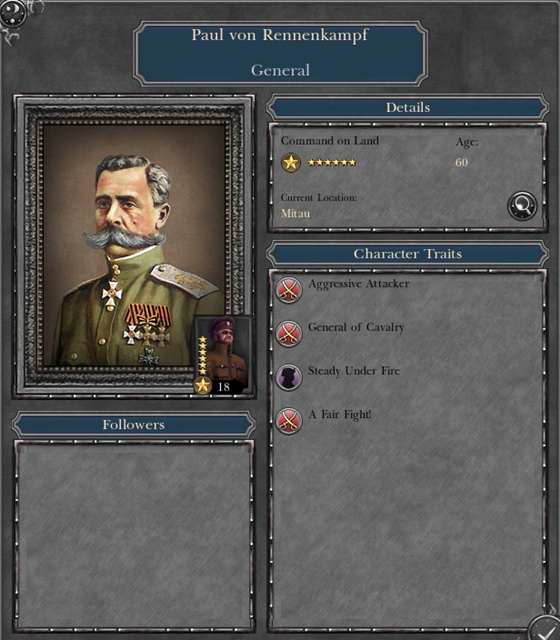 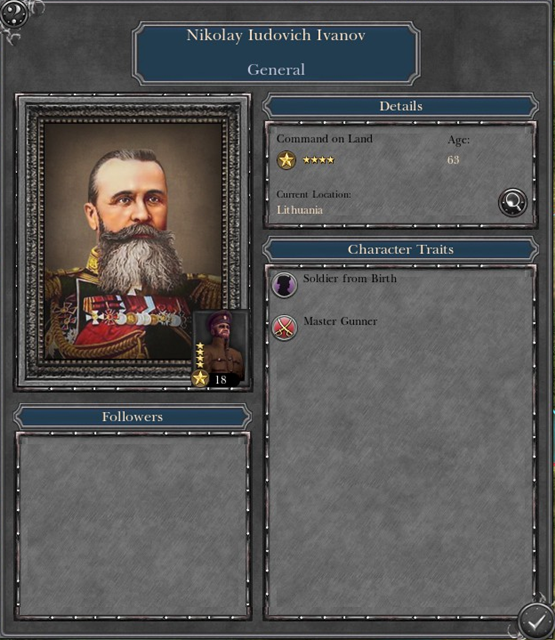 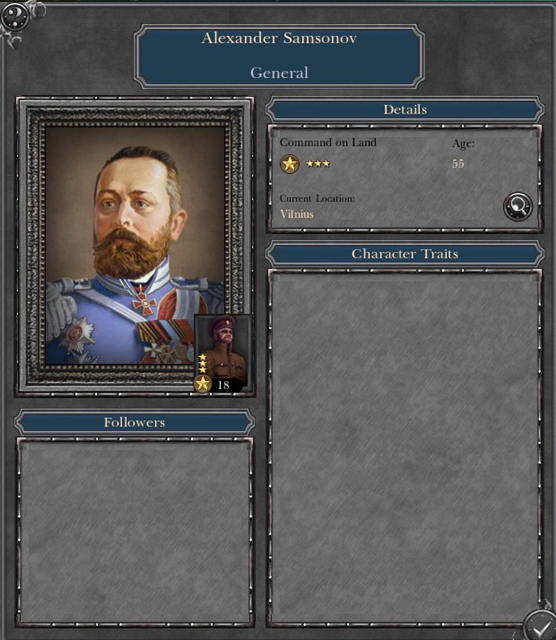 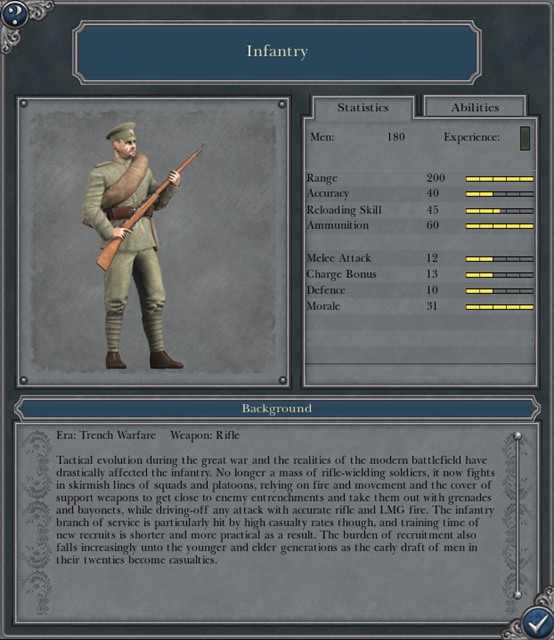 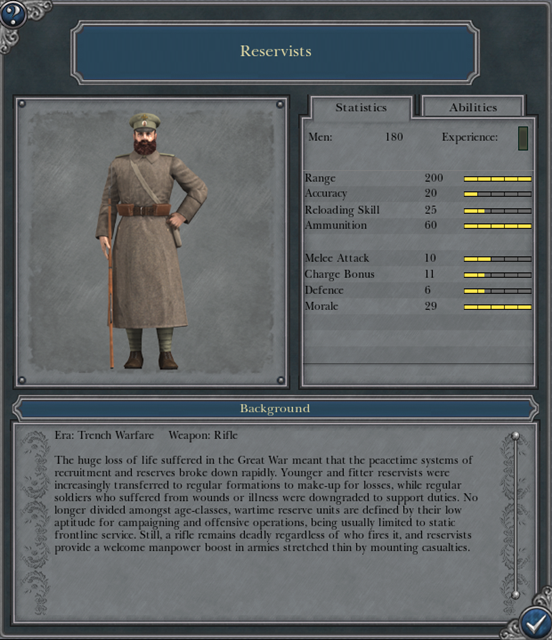 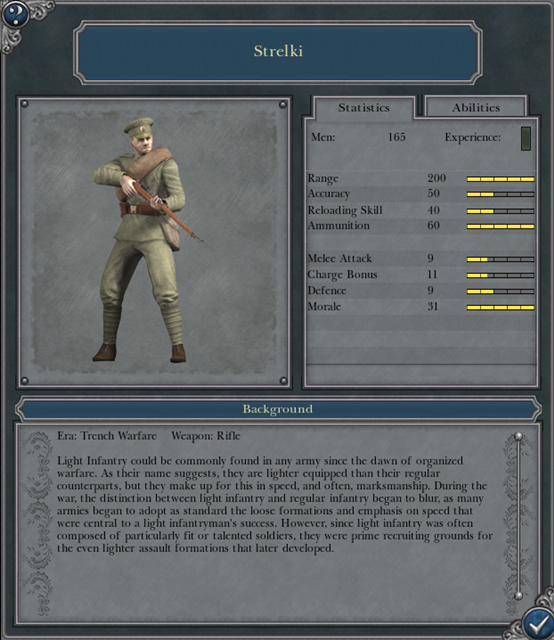 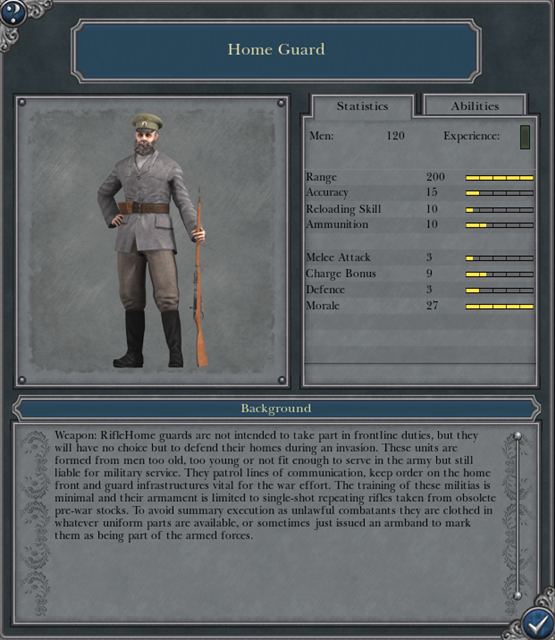 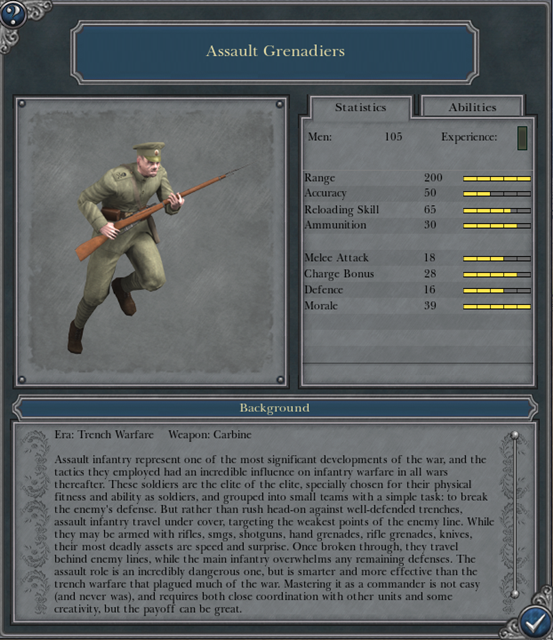 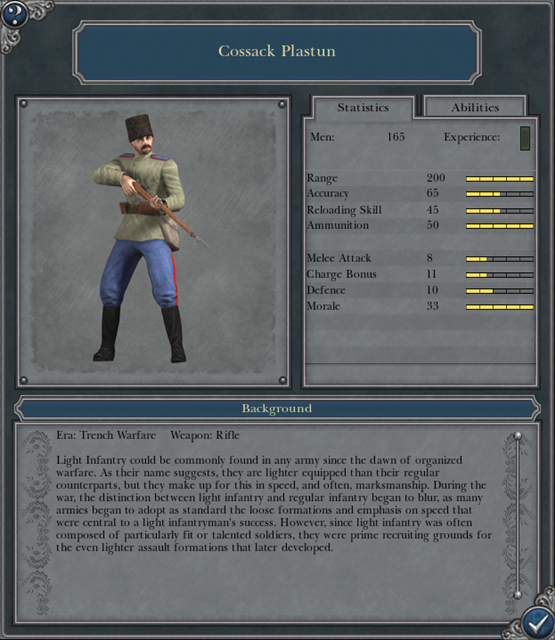 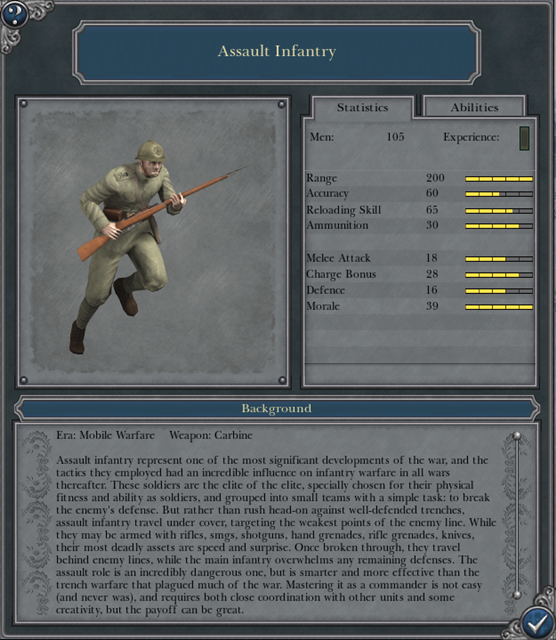 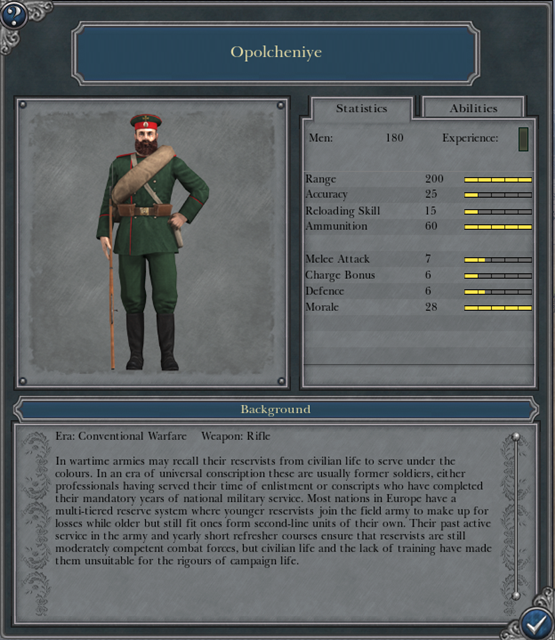 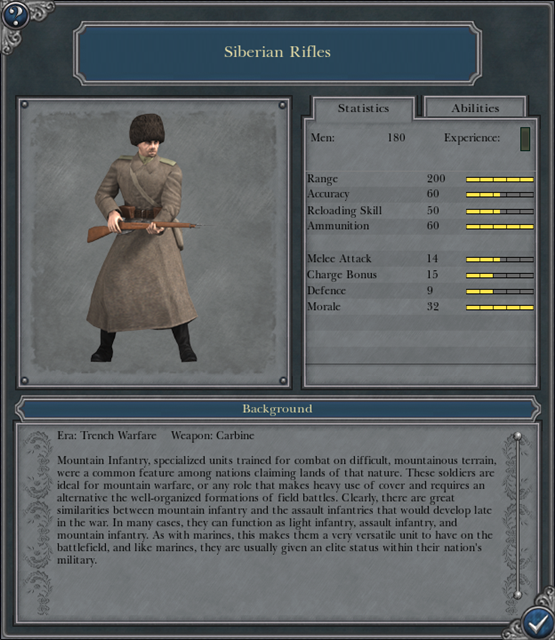 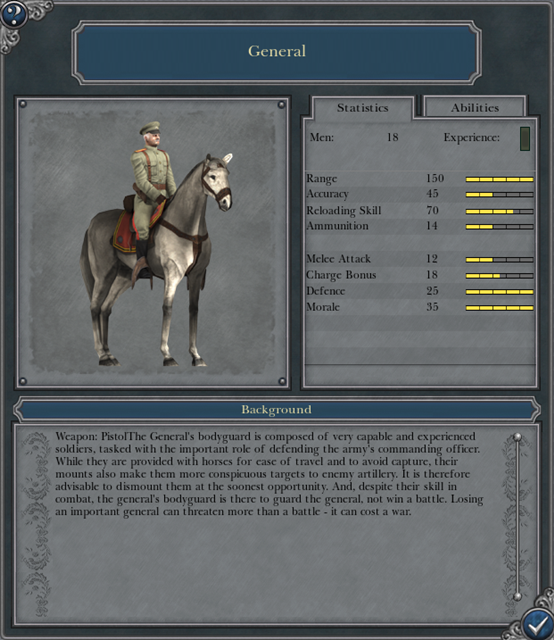 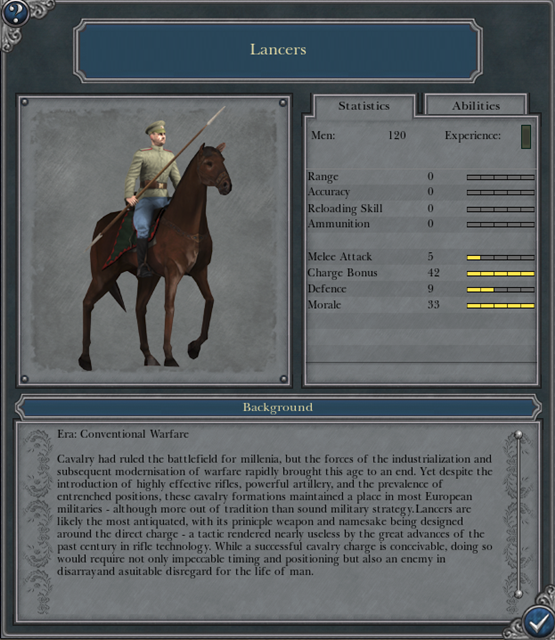 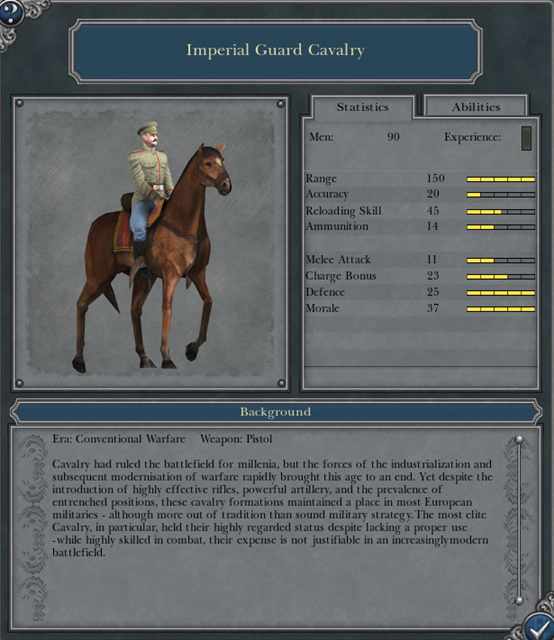 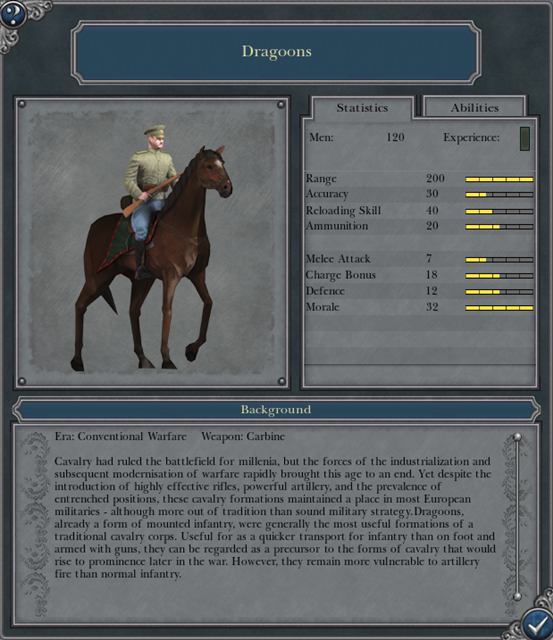 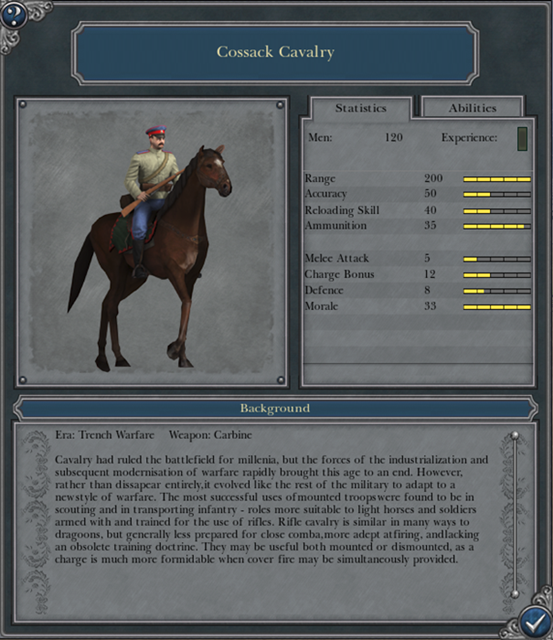 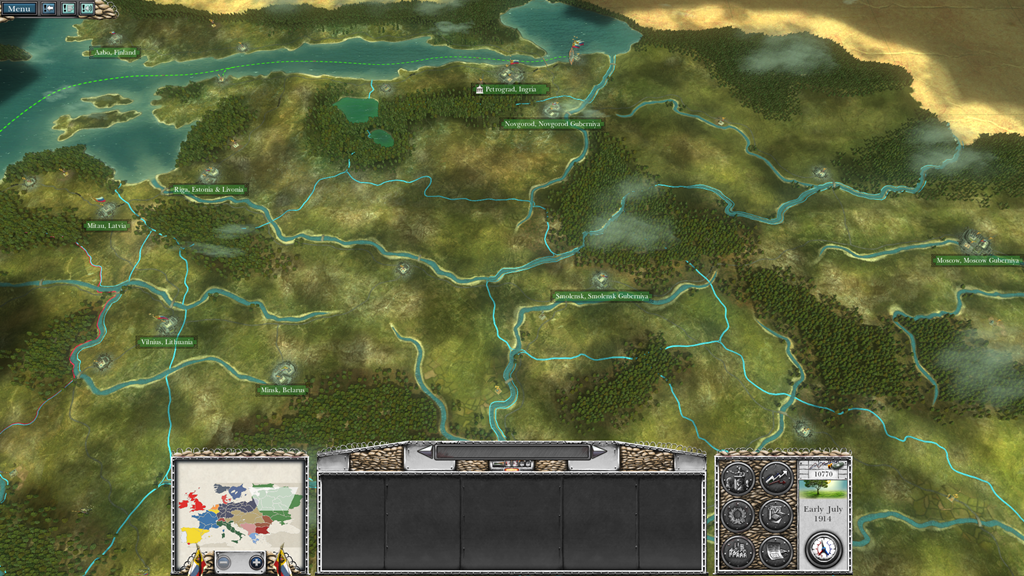 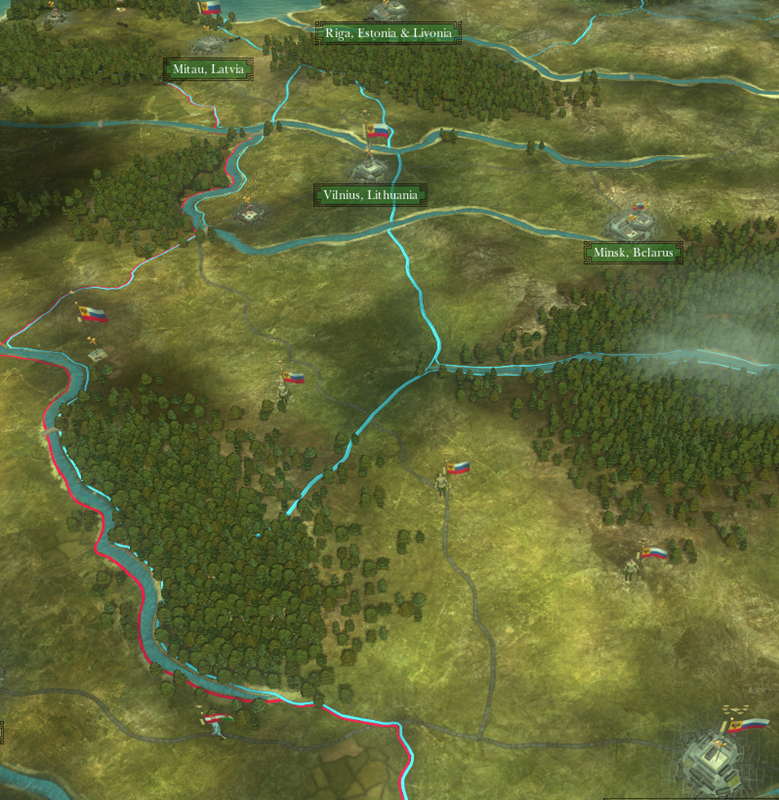 Because Russia had by far the most interesting story during the war we have created a number of custom scripts that simulate various goings on including the Tsar heading to the front leaving the Tsarina in charge, the assassination of Rasputin, the February revolution etc. The culmination of this is the November revolution and the creation of Soviet Russia. We will cover more about the November Revolution in the next update which will cover Soviet Russia.

Looks great but are the rifle models reversed? I notice the 3D model and in the unit cards that the soldiers are carrying left-handed rifles.

The NTW game engine reverses the models for some reason so we have to do everything in reverse then mirror it for the unit cards, I guess we missed that detail somehow. Should be a relatively easy fix though.

when will the update arrive？

"Most people looked at him with terror and with fear"

Great job! Keep it up.

Love it! Are the unit descriptions there to stay? Or do you intend to change those? Hell I'd be willing to write them for you if you wanted!

We had a guy who was working on the new text but we havent heard from him in a while. That would be awesome if you wanted to work on new text, just to let you know though there are now like over a hundred units or something crazy like that.

Happy to help! I love WW1, and writing, so it would be no issue. Let me know what you're looking for (history of units, tactical usage, etc.) And how long you want the text and I'll do it, no matter how many you need done!

Ok awesome, Ill DM you with the text file and more info as soon as I can.

Sounds great! Happy to help with such an amazing mod

We already did Serbia...

Hey, while i was seeing the new infantry 3D preview, i found a weird line missing texture, although, it's a minor problem. Prntscr.com

Thanks for letting me know :)

There is one more issue, the soldier on the map is in World War 1 uniform in all nations.
A single ottoman or old uniform should correct this error. Replace it with the first world war ottoman pas uniform.

Very good job, even including the dark green uniforms of the Opolcheniye. I can hear Farewell of Slavianka playing in the background as I look at the images. Just one small question, is it planned to also include the Russian expeditionary forces and Russian Legion on the western front?

No but if you are playing as Russian you can send a force to the western front. Might be tough tho.

Probably for the Russian Legion, have France be able to recruit that one, since it was part of the Moroccan Division and wore mainly french style kit.

If you need help on any uniforms or need information on units, don't be afraid to ask. Small collection of uniforms and information used for modeling from the time period, mainly eastern front.

When will the new update finally release?

Have the cannonball been finally change into an artillery projectile?

No because the animation for the cannon ball makes it roll or spin when fired so if we changed it to a ww1 style shell it would tumble through the air and look really weird.

What if you were to disable that animation? the part where it tumbles, what then?

It cant be disabled but it might be able to be changed to another animation. Its something I can look into but we have alot of other stuff that needs to be finished first.

Alright, thank you for your time I know you are all very busy,
I Can't wait to play the new version of the mod

So I looked into this and it turns out I was wrong. It is possible to simply disable the spin as it is just a field in the tables that's says spin or no spin. So we will be adding new models for bullets, artillery shells and mortar shells.

OMGOOOOD!!! THANK YOU SO MUCH!!, I knew it
OMG!!! Tears are coming out of my eyes from the happiness

I love you man, you are my hero

I Wish i could be there with you guys, I have some great ideas for this mod so i would like to leave you with some realistic possible additions like:

Dirt for the soldiers uniform, specially the lower part like the boots.

Gloves for some units like the Siberian rifles, reservist, long coat units in general.

Helmet cover for some soldiers in the British, French and German army to create more diversity.

Simply amazing models; great job. Just a quick question though, will the Americans be recieving a similar update to this one as well? Or is there no need for that?

Will the player be railroaded into becoming Soviet Russia or will it be possible to save the Tsardom and/or fight as the Whites?

If it is made just by script which causes the rebellions, it will be always possible to counter this by e. g. keeping troops in capital and to destroy rebels/revolutionaries by them. Like in original game.

any progress on naval battleships?

Do you guys have a new release date?

Won't they have stuff like flamethrowers and machineguns? Just wondering because there are none on the unit cards, and everyone else seems to have those.

Is there any chance Sweden will get a overhaul aswell? 'Cause swedish infantry wore tricorns and I would love to actually see them in-game.

I know this has been mentioned before but could you make it possible to play as White Russia during the civil war? Would it be difficult to do because of the scripted historical events?

Why no Latvian Rifleman?