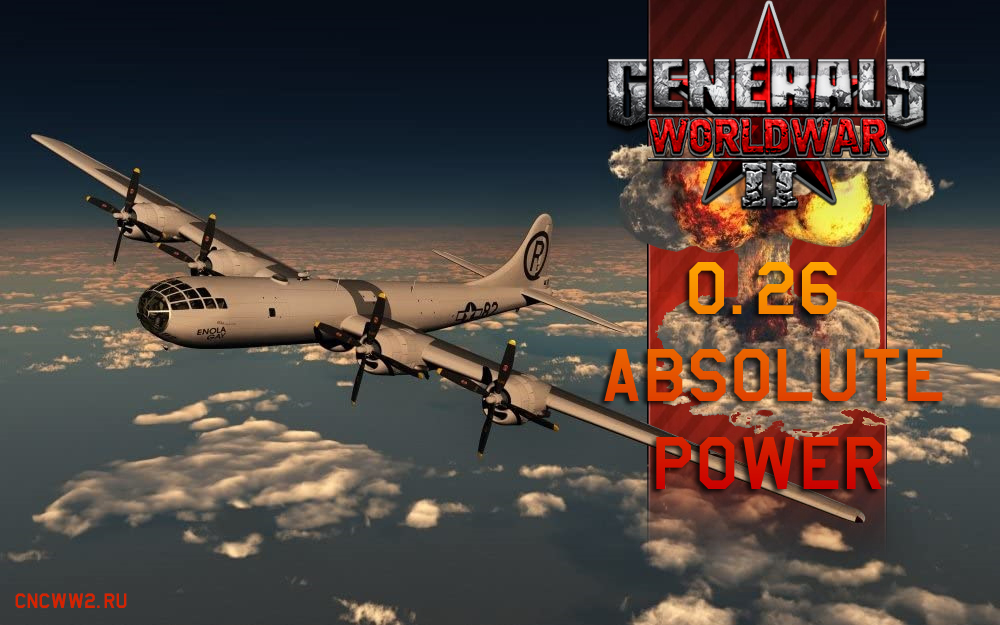 Reduced the total size of the downloaded files (if this is the first update). Launcher edits.

- Increased speed of PzI (Panzerwaffe subfaction)
- Increased damage of ISU-152 and KV-2 vs heavy tanks
- Increased build cost of StugIII (650-> 750)
- Increased build time for StugIII (12.0-> 16.0)
- Increased the rate of fire of all machine guns in the game by 2 times
- All machine guns got a scatter in the area and hit particles on the ground (visual effect of "suppression fire")
- Fixed funnels from explosions
- Fixed the size of the allied jeep (and lend-lease)
- Fixed incorrect display of seats for daimler, jeep and autoblindo
- Replaced background image displayed instead of ShellMap
- Fixed the lack of textures onboard pzIII screens on desert maps
- Changed the name of the Japanese super infantryman, now it is Hiroo Onoda
- Fixed missing muzzle texture for snipers
- Removed the mountain from the "Infinity Justice" map (could give TD)
- Introduced an adapted map for 2 players "Snowy Drought" (ZH)
- Introduced an adapted map for 2 players "Summer Arena" (Summer Arena from ZH)
- Introduced an adapted map for 2 players "Badlands" (Barren Badlands from ZH)

- Fixed display of infantry inside BA-6
- Redesigned commandsets for all vehicles that can carry infantry (checking and editing the location of the evacuation button).
- Added a timer after using the ability to install dynamite by infantry (the timer is equal to the countdown time before the explosion in 20 seconds)
- Fixed a bug where PzI did not attack by default without selecting a wall of fire
- Fixed the incorrect texture of the Tiger tank in SS-subfraction when it was promoted
- Changed the texture of the standard anti-tank mine to a better one
- Changed the "wall of fire" kameos to be more suitable for the style of the mod
- Increased the delay in the start of vehicle remoting for dozers of all nations from 1 to 4 seconds, so that vehicles under enemy fire cannot be healed faster than they are damaged.
- Removed the ability to crush vehicles with a Japanese dozer. Can crush the infantry only.
- Fixed the type of armor of the Japanese dozer from medium tank to light tank
- Removed the flamethrower from the Japanese dozer from the start. Now he will be equipped with it after the upgrade to a flamethrower in the Factory, but in return, the dozer will lose speed.
- Radically reduced damage by flamethrowers (all) to armored vehicles. Damage to infantry, buildings and vehicles without armor remains the same.
- Removed individual equipment of equipment with flamethrowers through the purchase of a secondary upgrade. Now vehicles receive a flamethrower immediately, instead of the main weapon.
- In connection with the cancellation of the individual upgrade, the price of the general upgrade has been increased from 800 to 2000 (returned back, as it was before)
- Changed the description of the upgrade for equipping armored vehicles with flamethrowers (added a list of vehicles)
List of vehicles that can be equipped with a flamethrower:
- SS-Ki (Japanese dozer)
- T-26
- Pz.Kpfw.I
- Pz.Kpfw.III (only for the SS sub-faction)
- M3 Stuart
- Mk.II Matilda
I took away the possibility of using flamethrowers from the rest of the equipment (who had it).

- Fixed the muzzle of the shot in the Tiger II after getting the stripe
- The Italian M13 tank of the German SS sub-faction is now only available from rank 2. There are no changes in characteristics and prices.
- Updated the description of the watchtower
- Added hotkey to switch m / d commandsets for dozers [V]
- Changed the time of entering invisibility for infantry and vehicles. Now its 3.5 seconds for infantry, 5 seconds for vehicles
- Fixed errors in the commandsets of some buildings of the USSR, Germany and the Allies when choosing 2 subfactions at once.
- Some changes in the settings of the German officer (possibly reduce the number of errors).
- Increased the minimum firing range for all types of weapons (possibly reducing the number of errors).

First of all, I apologize for the delay, I have several times postponed the scheduled release date of the next update for several months, trying to bring it to the "ideal" (at least, as it looked from my point of view. It paid off, although I had to work it's pretty hard on it, but I think it was worth it in the end, thanks for your patience, well, most of you who could wait))

Generals, be careful! Unfortunately, we again had to move to a new hosting, and although the launcher can now update itself correctly, in case you still have problems, we recommend using the version from the full installer

Repeat: IF the old launcher does NOT work, please use the new updated launcher OR full-installer! 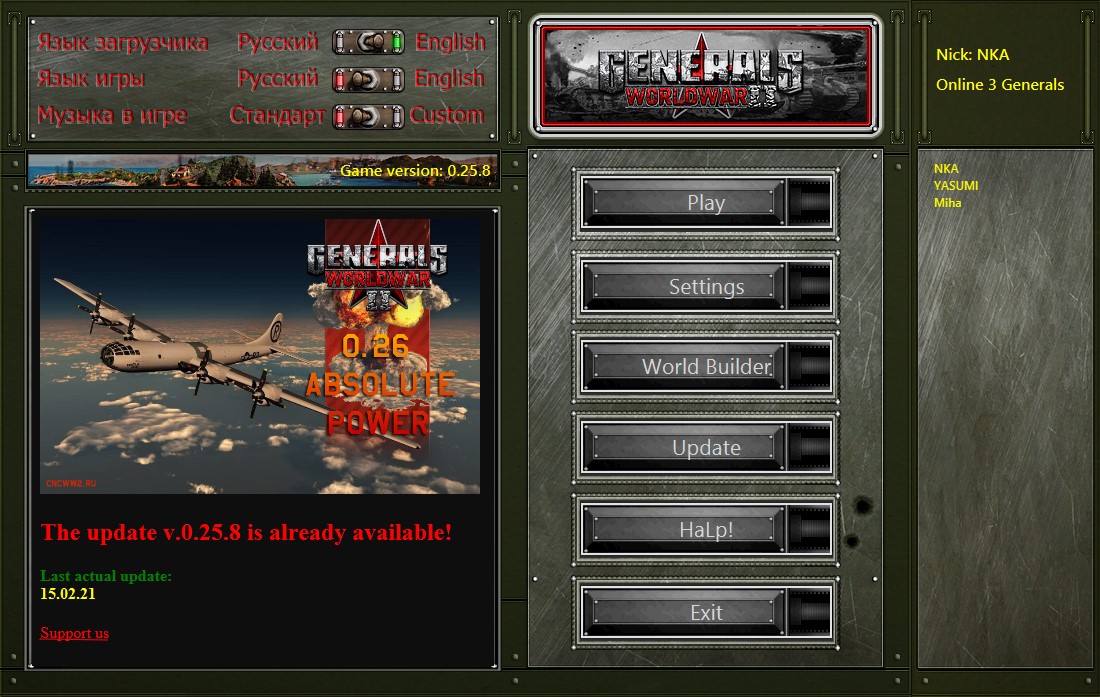 - Fixed error displaying the line that the test mode is enabled
- Fixed a bug with displaying the game language switching (toggle switch) if the game location is not found
- Changed the button "Support us" (opened the page with the details for donations) to "Help", which opens the FAQ (the name is specially written clumsily so that people pay attention and click on it).
- Added the message "Updates not found" to the launcher (if there are no updates or there is no server access to them)
- Added a "cancel" button (cross) to close the settings window without saving.
- Added the ability to set the resolution of the game - performance is still in question, please check especially hard!
- Added a window for logging (the checkbox for unlocking it becomes available in test mode, the window appears after restarting the launcher).
- Edits in the way of saving information about status and errors for their output in the log window
- Changed the way of updating the launcher, its configuration and assembly (the bat-script did not work well for everyone due to the difference in OS features) - now this is an application of 2 packages (launcher and updater)
- Raised the version to the one specified on the server so that there are no eternal requests for updates
- Corrected the display of the number of users online (Online 0 Generals)
- Fixed duplicate lines related to the number of users
- Removed the display of debug info-lines coming from the server
- Cut out an unused debug window for displaying users online in test mode, otherwise it could bug.
- New window for displaying users online (built into the default launcher interface), available in all modes
- Fixed a bug when exiting the launcher (it was not displayed, but the JVM was giving an exception)
- Now the launcher uses the username specified by him in the game (you need to check what will happen when you first start after creating the game - when I publish a new installer)
- Fixed the assembly of the launcher update (with some system settings, the downloaded file was immediately opened instead of starting)

We are glad to present you a new full installer for the new version 0.26!

Previous versions of the mod are most likely not compatible with this one (i wrote this, just becouse compartitable test is not ended now), so you will need to reinstall it using the installer.

If you have Generals ZH, you can download the launcher separately - it will install the mod files into it (more details in the FAQ, after we update it).

this mod gets better and better. great work guys. i will try it asap