We wanted to put together a quick update showing off one of the new weapon classes that is in NS2 - the Flamethrower.

We wanted to put together a quick update showing off one of the new weapon classes that is in NS2 - the Flamethrower. While still a work in progress, it will be in the next patch for those with Alpha access to play around with. 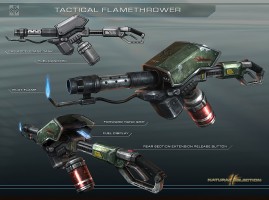 The basics of the weapon are pretty straightforward. The primary fire will spray a cone of flaming death that will barbeque aliens and alien structures. The initial flame burst will do the most damage, but players and structures will remain on fire for some time after, continuing to lose health but at a slower rate. We played around with having targets on fire set others nearby on fire, but it quickly became apparent that it would be abused by griefers. 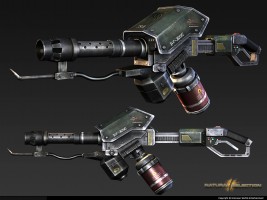 Currently there is no secondary fire implemented for the Flamethrower, though we have several ideas kicking around that we’d like to experiment with. One very useful gameplay aspect of the flamethrower, however, is that it can be used to clear rooms of Dynamic Infestation. It’s likely that the flamethrower will be the only item in the Marines’ arsenal capable of this, making it extremely necessary for pushing back the alien advance. 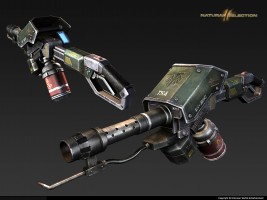 When faced with a raging inferno of fiery destruction the aliens will be cheered to see their fat firemen friends racing to the rescue - Gorges will be able to put out fires using their heal spray. Finally, here is some brief in-game footage put together quickly to give you a taste for the pyromaniacal fun of setting a Hive room on fire.


We hope you enjoyed this look at the flamethrower! Discuss it in our forums.

When in doubt, kill it with fire. :D

and if that would fail... kill it with more fire?

Awe"some"ful? You are playing a dangerous game, sir :P

Except aweful isn't a word :p

When bullets are not enough, there is always a backup plan =)

Hahahahah that was hilarious when you lit that weird tentacle thing on fire!

I thought:
"Wargblarbarglwargl" in an instant.

This laggy *** game is still laggy is all I see.

It doesn't quite make sense to fully optimise when the game's still being developed now does it?

He made a valid point, I'm sad to see so many people down vote him.

It's still alpha... liek, do you even know what that means?
IT'S NOT FINISHED

Valid? Not really. He's complaining that an alpha version of a game doesn't run smoothly. He might as well complain that his skate board only works after he puts the wheels on.

Whoever thought of Disco Inferno probably had a vision and saw this when it came to mind.

Very cool, but is it me or should the tentacles be a bit slower?

Anyways, HE KILLED IT WITH FIRE! ^^

The first moments of the draw animation makes me wonder, is the fuel display always displayed on the weapon, even when it is not used?
Also, the "pilot light" is not really visible - that might be only because of the perspective, though.

wow - perfect animation. makes the alien structures look really frighteningly believable. I like the Flamethrower, makes me think of District 9 (population control) and Aliens.
Maybe the secondary fire option could be to throw the Flamethrower down, turning on a timer for self-destruction. The player could then have time to get out of a hairy situation and burn a wall of fire between himself and his persecutors. Though I see that something like this would be hard to balance, since it would be unfair to do it inside a hive, for example. I wonder what the aliens will get to match up to the flamethrower. Classic would be acid again.

When's the game gonna be playable? Alpha has never once worked for me :(

Love how it extends when you draw it. Reminds me of the sniper rifle in mass effect (and any number of phallic comparisons! but hey, that's why we love guns in the first place, amirite?)

Looks kinda reminiscent of the marine flame unit from "Aliens" if you ask me... But I'm guessing that's the idea... I like mine well done, boys!

i have to be the only one again to critisie, but this fire looks really ugly...and the whole body has to on fire not just the down part.

Same impression I got.
A flamethrower that was really well made was the one in Return to Castle Wolfenstein, but that's just my opinion, I guess.

It was just the way it looked "fluid".

So why does almost everygame except for real life recreates, make a pilot light for flamethrowers? IDK maybe I'm just thinking that way but tahts what it seems like to me :\
I mean anything with dynamic lights and dark atmosphere mp, you can't sneak up on people cause you'll light the area up with your pilot
that is all

Its not really safe to 'go around' fighting a bunch of aliens either :P
I think the design looks really good, its not like they are making a real life working flamethrower. Besides its hardly a joke technically it would still work as a flamethrower in real life.

At least it doesn't throw bullet casings into your face. :p

The secondary for the flamethrower could be ejecting fuel on surfaces so you can set those on fire!

Well that idea came from another game... (I Forgot!)

the one that i saw in return to castle wolfenstein was great..
i hope this one will be better