Learn a bit about where Aero Empire's world has come from, and what it looks like when you enter it.

For Aero Empire’s latest update, I (Cobalt, Lead Writer, nice to meet you) would like to tell everyone here a little bit about the history of the world AE takes place in, its wars and expansion, and how, when the player begins, the world is composed of five precariously balanced nations. 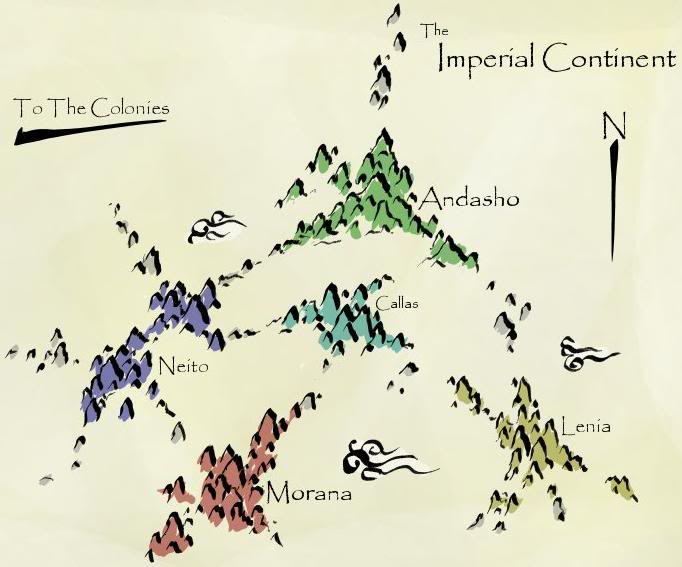 Aero Empire’s world, as stated in the game’s summary, takes place on an expanse of mountaintops separated from the world below, with all transportation dominated by steam-powered airships of various kinds. The world’s first major civilization, the Andasho Empire, emerged from a cluster of five mountains which still serve, at the start of the game, as the center of world. For a time, the Andasho Empire controlled all five of these mountain-islands until a civil war allowed two mountaintops, Morana and Neito, to break away. While these two islands were technically independent of each other and the Empire, Morana’s queen, Antonia, held great power over Neito, and, in effect, ruled over both countries; collectively, both nations are referred to in history as the Independent Islands. During the civil war, the island of Lenia joined the conflict late, and joined the losing side. After the war, in an effort to promote unity (and maintain a decent army), Camelia admitted Lenia back into the Empire; however, they were never trusted again, and were always looked down upon.

During the time of Andasho II, when the Empire still controlled all five major islands, a loose collection of colonies was started past the initial mountain cluster on the other side of Morana, at what was then the edge of the known world. But trips to these colonies were long (upwards of twenty weeks) and difficult with only hand-powered propulsion. The colonies were the closest other islands to the original cluster, and traveling to them tested the limits of air travel; it would be some time before true exploration of the world would be possible. After the civil war the colonies were almost completely cut off from the Empire; while they were not abandoned, as time went by the colonies grew less and less connected to their host nation.

For almost three hundred years, the world saw few improvements in air transportation; ships grew larger and deadlier, but their propulsion was still fundamentally hand-powered. By the time of Camelia’s descendent, Atris I, the Empire had grown more prosperous than it ever had before, and, along with its wealth, it simultaneously developed a rigid class system. This caused a mass exodus of poor inventors and artisans from the Empire to the colonies, all of whom were unable to find success in a system that did not want them to succeed.

Among those who left was a man named Orman Serato. Serato was a would-be inventor and the son of clockmaker, who finally realized that his family’s low standing would never allow him to secure either a position in academia or a noble’s patronage. So, in exchange for doing metal work onboard the ship carrying him, Orman secured passage out to the colonies, where he hoped for the freedom to explore his ideas. It was his time aboard the ship carrying him that sparked Serato’s interest in engines, as a way to automate some of the work done to propel a ship through the sky. Later, during his afterhours as a clockmaker in the colonies, Serato created the first steam engine on a small scale, and eventually produced a toy-sized version driven by boiling water attached to a rolling model of an airship. However, he believed that the engine could never be powerful enough to keep both itself and a ship airborne, and never pursued the idea further. Over time, these toys become very popular throughout the colonies, and after a few years, one made its back to the Empire, where it was spotted by a failing businessman named Laras Tan. Tan saw a child from the colonies playing with one of the rolling ships in the street, and with his life collapsing around him, he took all the money he could pull together and fled to the colonies, where he contacted Serato. 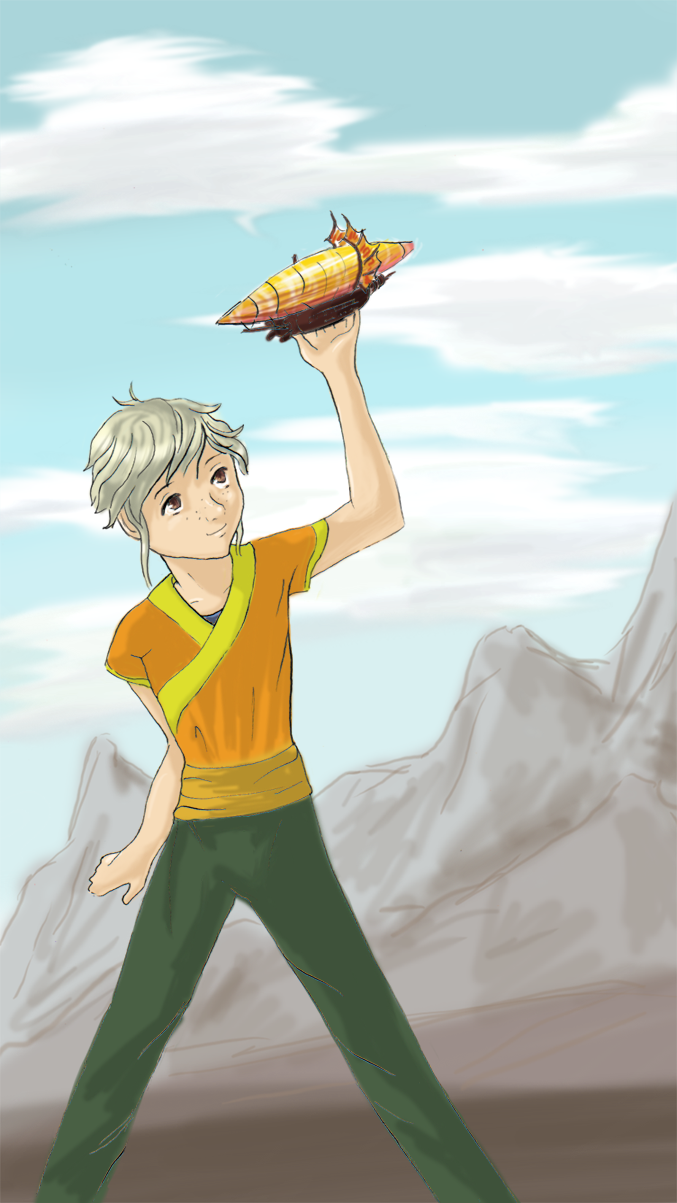 While their relationship was not always a smooth one , what Serato lacked in vision, work ethic, and cash, Tan more than made up for. Over the course of a decade, Tan was able to turn Serato’s brilliant toy into the single most important invention of the Aero Empire world – a steam engine powerful enough to run a full-sized airship.

When Tan returned to the Empire (Serato had stayed behind in the colonies), he did so aboard a steam-powered ship. The Empire quickly secured an exclusive contract for the engine with Tan, and though Morana tried to purchase an engine of their own he turned them down, preferring to keep his relationship with the world’s most powerful country in good standing. With the new speed of travel, the colonies were quickly transforming from barren outposts into booming frontier cities, and the danger of the engine quickly caught the attention of Morana. Morana found out that the Empire was secretly constructing a military establishment in the colonies, which would effectively encircle the Independent Islands and with that, they would be easy to reconquer. Many of the previous colonists were also displeased with the booming growth of the colonies and uprooted themselves, moving as far from the civilized world as possible. Serato left with them, and Tan shortly afterwards.

Morana ultimately secured her own version of the engine after an unofficially-sponsored pirate hijacked a ship flying inside Moranan airspace, and after a year of retrofitting ships, they intercepted a shipment of Andashan troops heading toward the colonies, sparking the first steam-powered war.

For almost a year, the Empire’s victory seemed certain, until its admiral of the fleet (who was also Atris’ brother) was found stabbed in his sleep by a Moranan spy, and in the subsequent chaos Lenia absconded with steam engines of their own and declared themselves an independent nation. The far colonist (those who had moved as far from the rest of the world as possible) also declared their independence after being commanded to send troops to support their country. With no resources to spare between trying to both reclaim Lenia and hold the Moranan border, the far colonies were able to keep their independence.

Finally, after a brutal year-and-a-half more of fighting, with no progress being made by anyone, Atris called for peace talks, and after some persuasion, Lenia and Morana agreed to meet. The most important agreement to come out of these talks were borders, drawn from the most recent maps of the world, which established each nation’s exclusive settlement rights beyond what had already been claimed, and which everyone hoped would keep further conflicts from arising as more of the world was explored. Still, no one came out of these talk completely satisfied: while the Empire obtained a larger cut of the world than the other two countries for future settlement, it lost both its colonies and Lenia. Lenia was relieved to receive peace and the acknowledgement of their independence, but they also wound up with smaller borders than they would have liked. And finally, the Independent Islands, in exchange for the seized colonies, surrendered the majority of the land it had taken along the Empire’s border, which had been one of the things it had wanted the entire war. And not even taken into account at the talks were the far colonists, whose land was split between that claimed by the Independent Islands and the Empire.

When Morana attempted to claim the far colonies twenty years later, she found that Serato and Tan had been hard at work on refining their engine, and the colonist’s fleet had quietly become the most advanced force in the world. After soundly beating off Morana, Tan made a proposition: as they stood then, the colonies were all separated, only meeting to decide on matters that affected all of them (for example, during the invasion, the colonies had temporarily pooled their militias together). Tan proposed cohering into a single governing body, so that instead of squabbling amongst one another, they could share resources and military forces to protect themselves from any further danger, and to flourish. Serato disagreed. He believed that national government was by its very nature corrupting, and that the existing system was the best thing they had. Ultimately, the colonies split. Those who followed Tan became the Free Peoples, and those who agreed with Serato began calling themselves the Outcasts (a name first given to them during the world war) and, moved, again, as far from civilization as possible.

The game begins a century later; the world is precariously balanced, with the formerly agreed-upon borders growing increasingly disputed. The Empire is massive once again, and Morana has grown resentful of the Free Peoples, who have hemmed in their potential for expansion. Lenia is growing faster than it can keep up with, finding islands rich in rare resources but also growing increasingly corrupt. And at the edge of it all are the Outcasts, constantly on the move to keep away from the expansion behind them, who will soon have to face the fact that, eventually, there will be nowhere else for them to go.

I hope you’ve enjoyed reading just a sample of what have so far. In future updates, we hope to spend time outlining each of the game’s five nations, how they relate to one another, and how the game’s plot will be handled within this dynamic world. In the meantime, enjoy the amazing art by Timmon26 and RedOwl, and keep in touch.

That is brilliantly written, had me completely taken in to your world.
Love it.
I am really enjoying watching the development and that was just cake right there.

Keep it up, great work all.

Any plans on writing more back-story in the form of stories?

Thanks (to everyone)! And this is in fact a very brief summary; at the moment, our backstory totals around 35 pages and counting (by comparison, this is around 7.5 - 8), so there's plenty of little things (and a few big) that didn't make it in, not to mention what we plan to keep secret until you find it for yourself in-game. However, while I'd never thought about stand-alone stories, I could certainly see them as an option, perhaps in the form of lore lying around the world,especially if we find that something hasn't been directly integrated into the plot.

Nicely written!
Why is there no information on Callas though?

Callas is, throughout nearly the entire backstory, a part of the Andashan empire. It's conquered in the beginning, and never breaks off (the map is by ruling house / mountain name, not by nations). There also isn't a lot about Neito, which is part of the Independent Islands, and has been very loyal to Morana (almost subservient), although, that may change in the generation that passes during the game.

And you'll be seeing plenty of Callas; their time just hasn't come yet. I was wondering if someone was going to point that out though :).