The Dark Mod version 1.03 is a milestone release with the inclusion of HDR-lite, a Mission downloader, Female AI, Horse AI and the "Werebeast"! 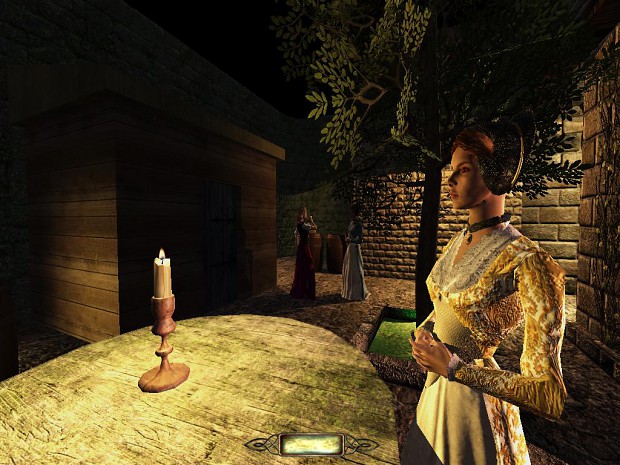 (Image courtesy of Clearing at Darkfate.ru)

At long last The Dark Mod version 1.03 is available for download!

To get the update, just run your tdm_update.exe file (inside your darkmod folder) or see our website for more info: Thedarkmod.com. With the new updater the download size for upgrading 1.02 to 1.03 is about 210 MB. A fresh download will weigh about 1.8 GB.

The full changelog can be found on our wiki.

Note: While missions are fully compatible with this release, you can NOT load any previously saved games after updating to 1.03. If you're in the middle of playing a mission, you might want to finish it before updating.

So you want to know what the new video settings in Dark Mod 1.03 are all about do you? Well, pull up a chair kids and lets learn all about it.

The Dark Mod requires mappers to encase their entire level with a single, 'low level' ambient light. This light removes the pitch black shadows that Doom 3 is infamous for. This ambient light must be named "ambient_world" and should only be bright enough to remove pitch black shadows, and should ideally not be bright enough to visually affect the light gem. There are more advanced options for location based ambient lighting, but we won't get into that here.

The values from the ambient_world light can be used several ways. We now have 3 'user defined' performance options in the menu for how the light is rendered ingame. Two of these options require all of our textures to contain special code to support the 'simple' and 'enhanced' ambient settings, otherwise the textures will appear black when users try to use them. It is important for mappers to ensure any custom textures have the appropriate code in their material files to support 'simple' and 'enhanced' ambient lighting.

Simple
As the name implies, this is a technique that renders the values of the ambient light by passing those values to the diffuse texture through a special stage in the textures material file. There is no normal map or specular pass for the simple ambient since this setting has performance in mind. Low end systems will see the best results with this setting.

Normal
This is the default way of doing things. Diffuse, normal and specular textures are lit by the physical light, and do not rely on any of the special material file code.

Enhanced
This is an enhanced version of the simple method where diffuse, normal and specular are all rendered by having the ambient_world values passed to them.

Enhanced
This is our own enhanced interaction shader. It does some special tricks like edge detection, nicer specular, and correct ambient light shadows when using 'Normal' ambient rendering. Lower end systems may not be able to handle the extra processes.

This setting adds some special post processing effects to the game. What you see on screen will have some added visual punch. It can be used in combination with any of the settings listed above.

When HDR-Lite is enabled, you will also be able to turn on bloom with the bloom slider. Dragging the slider all the way to the left disables bloom completely.

Formerly, mantling (jump, grab ledge, then pull yourself up) only worked for stationary or moving (translating) objects. Ishtvan now implemented mantling onto rotating objects, too. This video demonstrates nicely the effect and possibilities.

By the way, the map is called Swing and is a contest map that confines the player into a 1280x1280
(unlimited height) cube, and if you watch the video, you will see that the map certainly feels way bigger. A clever trick :)

In summary this is one of the biggest updates to The Dark Mod and will improve both current and future Fan Missions for both mappers and players!

(Or simply browse to your existing Dark Mod 1.02 install directory and execute the tdm_update executable.)

Which is absolutely pathetic, IMHO. no dis-respect to the other mods that have been nominated (over the last few years), but very few are on the same level and scope of TDM. TBH, I'm kinda tired of seeing all the Half-Life mods sucking up all the glory.

TDM and team are still highly respected in my book! Keep up the amazing job, guys!

I wanted Cry of Fear to win, but still voted for you..

Is it just me, or was there alot of "boring realism millitary war" mods? Which, funny enough, looks like every single wargame ever made?

I think that "Sim War" is something that is just in-vogue because it helps folks cope with the idea of having to fight in real wars or to deal with feelings about family doing so. It's cathartic to pick-off virtual enemies and imagine that they are real and therefore feel that you have somehow fended-off a real threat imposed on you by conscription. Maybe someone should start a national poison turtle scare to sell more Mario games.

I won't comment about what it says about someone who wants to pretend to be a professional Thief... ;)

If these details were released earlier it might've boosted our standing but The Dark Mod team goes through extra trouble to ensure that the features they are listing are fully workable for a large number of beta testers before promoting such features. For example, the improved Object LOD system was delayed for release v1.04 due to last minute issues seen in beta.

Player's Choice MOTY hasn't yet been announced so... fingers crossed...

Ah yes... no Thief like game is complete without Wenches :)

Wow, VERY impressive update you did! You guys do the D3 modding people proud. :)