Some free days are comming along and so I will finishing my mini MOD the dam for Crysis Wars. It's a small single player mod with one level (dam) which has been created initially for the Crysis Wars Patch Day in March 2009, but i had to stop working on it. Dam from James Bond - Goldeneye (N64 Rareware) was used as reference.

Some free days have comme along and so I tried to finishing my mini MOD the dam for Crysis Wars. It's a small single player mod with one level (dam) which has been created initially for the Crysis Wars Patch Day in March 2009, but i had to stop working on it. However I will continue mapping now. A status of the map can be seen below. ATM I search for a AI/FG designer, if you are interested feel free to contact me. Hopefully next week the final release is near :) (Don't take the logo too seriously ;) a small map just needs a nano- suit ) 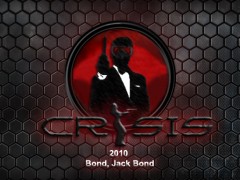 The mod itself consist of one level. This level was created after level DAM from James Bond "Golden Eye" - N64 1996, Wii 2010 -. But there are many differences in design and gameplay! You play an crazy Soldier, which wants to destroy a dam in Austria, because he thinks that his goverment hides a secret military base in the dam.Some screenshots from my Portfolio (Effective 2009): Dam (Wip)

I hope you like the provided screens and you leave me some feedback! Following picture shows current level design process and will be updated continuously: Sniper tower from the beginning. Rain effects, guards and bad weather creates some unique atmosphere. Created some new sound spots and areas, including more water effects for a rainy mood! 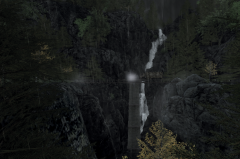 
The dam, a big building somewhere in Austrian natura. Maybe you can see the little secret island from original game from 1996? 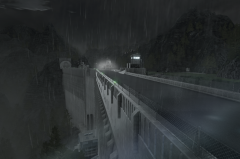 Comparinson picture which shows the start tower, where you can find the sniper. 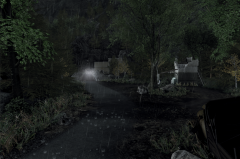 
Dam entrace, of course it is locked for security reasons ;) 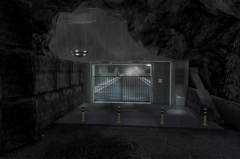 Every mountain environment has some observation deck, altough it's raining, you have a very nice and clear view from there. 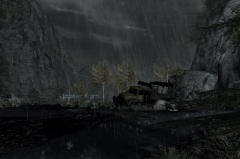 The sight is great, in distance you can see some bolt while you hear some thunder. 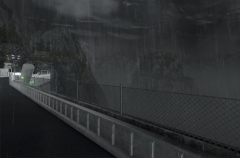 Amory base is the last location before the dam. Guards are patrolling even in rain, be carefull if you want to avoid a fight! 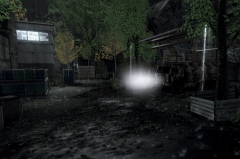 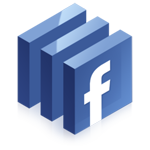 Sometimes I forget how gorgeous his game can be.

But Dam, then the mod community smacks me in the face and reminds me. ;)

Looks good, i'm looking foward to see what changes have been made

Holy crap, this looks awesome. Also the night versions look epic with the rain. I'd say just get some new ambient rain noises so it sounds like an actual storm.

does it have a dam bar? =D exellent work

I also like it more. The new one just does not look like a photography anymore. I think it's because it's raining.

I'll have to agree on that the daytime shots looking better than the newer, nighttime ones - but hey, fantastic work!

Question: Your workaround for the indoor rain shader problem....did you just beam the player to a different indoor area hidden in a visarea? If so, then that's Brilliant man!!

Sorry for the double post but I didn't make the 5 minute limit on editing:

If you are doing what I think you are with visareas then what does the player see when they look out the doorway?

Hey thx for all the comments :)

I won't use daylight because the overall performace is sadly not good enought to stand daylight with many shadows ;(

Hoever it looks great in night and has some very cool rain effects and sounds :)

(No beaming - it's just a construct of parts which hide other parts which have rain shader on them so it looks "not wet" and effekts are turned off when you go inside somewhere until you can see outside then it is turned on.

Ahh! I get it. Simple yet brilliant! I will have to remember that. I made a little rain level for the X-Mas competition last year and ended up removing the rain because of that issue. Thanks! Great work!