Our last post depicted the Aztec first age in action; we played as Huitzilopochtli and showed you some of his mechanics. Now, before we move on into showing the second age progress we want to show the rest of Aztec Major Gods that will be available to the player. Some of you have already guessed who they are, and maybe some of you have already noticed them during the gameplay video as they appeared as some of the Major God selection options.

In today’s post, we will talk about the three Aztec Major Gods and their gameplay style. We have already talked about Huitzilopochtli in previous posts; however, we have done some slight adjustments to it and we will show them today. The two remaining Aztec Gods are of course Quetzalcoatl and Tezcatlipoca, twin brothers, and cosmos duality. In addition, each Aztec Major God will have a unique Tlatoani bonus in order to enhance and emphasize their playing style. 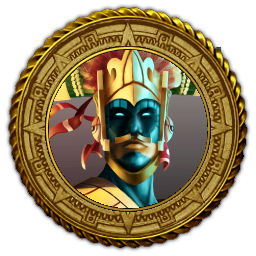 Huitzilopochtli was the main Mexica God since he was God of war and zenith sun. He was associated with strength and war. He commanded the Mexica to daily feed him with the hearts of defeated enemies, allowing the sun to continue its cycle, therefore Mexica made plenty of enemies and went to many wars. This way life was always assured.

Huitzilopochtli will be an aggressive focused God, no peace just war, he will have different military boosts that will emphasize this strategy. Its main focus will be mythology as he can gather favor faster than other gods and haves access to minor gods which can boast this strategy.

Previously we had shown a different Huitzilopochtli image, but we do not have rights over that image. So we are now depicting a different image created by our collaborative artist Ariel Rauögrani.

Cuachicque (Shorn warrior): Warrior armed with macuahuitl and a shield, deals area damage. Good against infantry and bonus against other cultures infantry units. 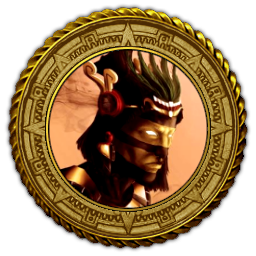 Tezcatlipoca Moyocoyani was God of darkness, night, the unseen, and battle. He represented the dark side of the cosmos and was a duality to his twin brother Quetzalcoatl. As lord of war, Tezcatlipoca constantly drove humans to battle and was therefore known as the enemy of both sides. Tezcatlipoca was believed to embody the most admirable values and qualities of a warrior. He was bold and daring, yet he often used cunning to outwit his rivals.

Similar to Huitzilopochtli, Tezcatlipoca will be an aggressive focused God with different military boosts that will support this playstyle. Though different than Huitzilopochtli, his main game will be through human warriors and priests as he will have bonuses to boost this strategy.

Tezcatlipoca art has also been created by our collaborative artist Ariel Rauögrani.

Tezcatlipoca statue has been based on the Toltec Atlantean sculptures and it features some of Tezcatlipoca's most important traits, such as his facial painting, his smoking mirror and he is also missing one foot!

Here is how it looks in-game: 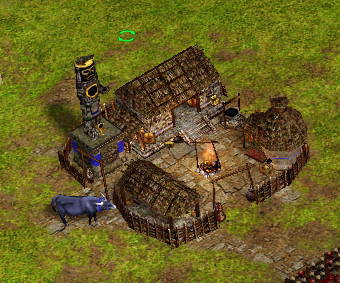 Decoy: target some of your units to create shadow clones to fool enemy units, grants more in following ages.

Smoking mirror: Tezcatlipoca grants his smoking mirror to your priests and Tlatoani increasing their line of sight and speed.

Skull knight: Armed with a halberd, strong against cavalry and buildings. Receives a bonus against other culture's buildings and cavalry. 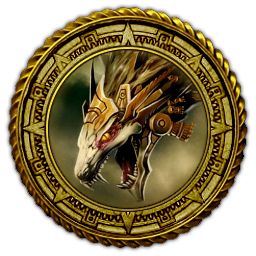 Quetzalcoatl was arguably Mesoamerica's most important God. He was God of life, light, knowledge, and virtue. He was one of the primigenial Gods, he created earth and life on it. He created men and always loved them, Quetzalcoatl gave humanity many gifts such as corn, alcoholic drinks, knowledge, and the ability to love.

In contrast to Huitzilopochtli and Tezcatlipoca, Quetzalcoatl is not meant to be an aggressive war, God. His playstyle will be more focused on the economy and defense. So this God will offer a completely different way of playing the Aztec civilization.

Displayed Quetzalcoatl art will not be the final one. We’ll use this one to illustrate until we get one of our own.

Quetzalcoatl statue has been based on elements from different Mesoamerican cultures, such as the Quetzalcoatl heads from Teotihuacan and the Quetzalcoatl temple reliefs at Xochicalco. It is represented by his most famous form, as a Serpent all covered with feathers. 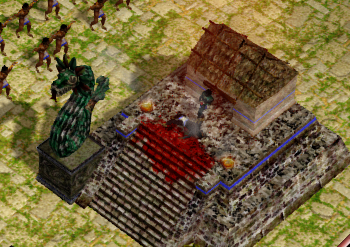 Gift of corn: Available in Archaic age after researching Huehuetlahtlolli. Quetzalcoatl gives corn to your people allowing the construction of farms in age I and slightly decreasing their cost.

Zealotry: Available in Heroic age after researching Huehuetlahtlolli. Increases the combat abilities and movement speed of Villagers, but reduces their gathering capacity, this allows for a villager rush strategy.

No more sacrifices: Available in Mythic age after researching Huehuetlahtlolli. Quetzalcoatl prohibits human sacrifices. Warriors won’t generate any more war captives, existing war captives will be turned into villagers. Favor will now be generated in worshiping in temples just like Greeks do.

In our last posts, we have been showing the Aztec first age, so now we are currently working on the second age and that's what we will be sharing with all of you guys. Stay tuned and keep offering sacrifices to Huitzilopochtli and Tezcatlipoca because great things are to come.

Hello, I am Mexican, have you already obtained the dialogues in Nahuatl? I know someone from my town who speaks that language well.

I suggest that they include in the game one of the most important technologies of the Mexica, medicinal plants (which also appears in the Age of Empires)

Regarding boats, they could include archer canoes, more damage when more crew it carried.

Huitzilopochtli is supposed to be an aggressive mayor god focused on mythology, right? But he have a lot of buffs to human soldiers. I think gameplay and concept don't get along completly.

I like Quetzalcoatl and his own gameplay. No More Sacrifice is a interesting concept but I think the mechanic can be improve, it's feel like a loss of identity.

Overall, I love what are you making. Keep going on :)

Thanks a lot! we are glad you are liking the project
Well the idea behind Huitzis buffs is: yeah he's got stronger soldiers and also gets free soldiers with buildings but the logic behind this is that the more and stronger warriors you have the more captives you'll take. This has synergy with Huitzi's tech which increases captives gathering rate. Huitzilopochtli will also have access to minor gods that will improve Myth Units making that strategy viable.

However, if this doesn't really work as we expect we might change Huitzi's bonuses in the future.

No more sacrifices tech has some historical/mythological explanation. So it is said that for some time Quetzalcoatl took a human form and went into the city of Tollan (capital of the toltec empire) and there he reigned as sovereign (Probably the truth behind this myth is that there was an actual king that took Quetzalcoat's name and embodied his figure in order to increase his power, authority, and legitimacy). His reign was the most prosperous recorded in all Mesoamerican history, he taught many things and he loved his people to such a degree that he even prohibited human sacrifices. His reign ended when his brother Tezcatlipoca tricked him and made him commit some terrible sins, in shame Quetzalcoatl abandoned his crown and kingdom but he promised he would return one day and he would take back his kingdom. This legend is also the explanation of why Mesoamerican people believed at first that Hernán Cortés was not a human but Quetzalcoatl who had returned to claim his kingdom.
Our mod is also named after Quetzalcoatl and this legend, so the Return of the Gods is actually a reference to Quetzalcoat's long-promised return.

God, the image of Tezcatlipoca and Quetzalcoatl look so good!
I like those gods so much that I wouldn't know which one to choose, probably tezcatlipoca.

hahaha, you read my mind, just when you were showing Huitzi in the gameplay I stopped the video to see the other 2 and I must say that you have not disappointed me, too bad that in AOEM you can only choose 3 gods, because the Aztecs had 4 superior gods , Tláloc had the same rank as Quetzal and Tezcatlipoca, but anyway, I loved it (you are probably saving Tláloc for the Mayans, known by them as Chaac).

Imagine how badass it will feel to send the message to my opponent just before attacking him: "Death on the obsidian's edge" haha

You're right we actually had a hard time deciding which major Gods would be represented in the game, we decided to let Tláloc out as a major God. But he will absolutely be represented in-game and we do have special plans for him.

You nailed it once more! Chaac will be available as a Mayan major God. Chaac was such an important God, especially in the Puuc Yucatan region to such a degree that he created a complete architectural style. He was a water deity and shared lots of similarities with Tláloc but they're not quite exactly the same.