We have gathered a lot of the work we have done, through the last three months, and now we want to show it off! - Also, we announce the launch of our all new website www.jkgalaxies.com

After almost 3 months of waiting, the JKG team brings you the biggest Developer diary, you, quite possibly, will ever see. No, we are not dead, and i hope this will underline that fact with lines as thick as the sarcasm i've been using everytime someone said we were!

Lots of this, is WIP! (Work in progress) and therefore does not necessarily picture the full quality, nor the exact resemblance, of the finished product, which makes it into the released mod.

With all these words, to back up the statement, let's get on with the actual news! Normally I'd start the diary right off, by telling you all how amazing everything is looking In-game, but instead, today we will look at something off-game! I am of course refering to our completely newly designed 'n launched
Jedi Knight Galaxies Website! Which includes some new interesting deatures such as

Well, that covers all about the new website I think, apart from the fact that we want you there, to help us maintain a funloving and mature community, which helps us create, what JKG in the end will turn into. Without a strong community, a mod itself, is pointless! We hope to see you people there, and we hope to be able to make a smooth transfer from the old site, to the new one!

Ok, so to start this off, we'll take a look at the animations that Hirman and TheExile have been working on, the past few months. Since way too many were made, to showcase them all here, we've decided to pick the best ones, and leave the rest of them, either for you to discover when the mod comes out, or for showing in one of the next diaries.

Without further ado, I give you: Hirman's work, ranging from "Wounded" to "Squad Commands!" :


Apart from Hirman's amazing animations, we also had another animator join his efforts in the last few months! It's time to present the work of an already pretty known animator: TheExile


That was it, on the animation side, here on MODDB for now .. Keep in mind, that this was only a tiny taste of the immense amounts of animations Hirman and TheExile have been spitting out these last few months, and that you can watch the rest of them on our new official website!

The next thing we'll take a look at, is an area where we have several things complete, but only a few things to really show you, due to speculations about how/if the skins and models themselves will be in the end product of JKG. Here's a look at the Bounty Hunter, modeled by HellKobra and skinned by Darth Phae:

Also; Skinned by Darth Phae, we have some new Zabrak females!

Way more than these models has ALSO been done, but don't worry, we will show them off sooner or later, at this moment though, we'd like to keep a few things to ourselves, at least! ;o. We start off with a vehicle model, that is, as can naturally be seen, still in WIP. Model by Karpman and rendered by IG-64 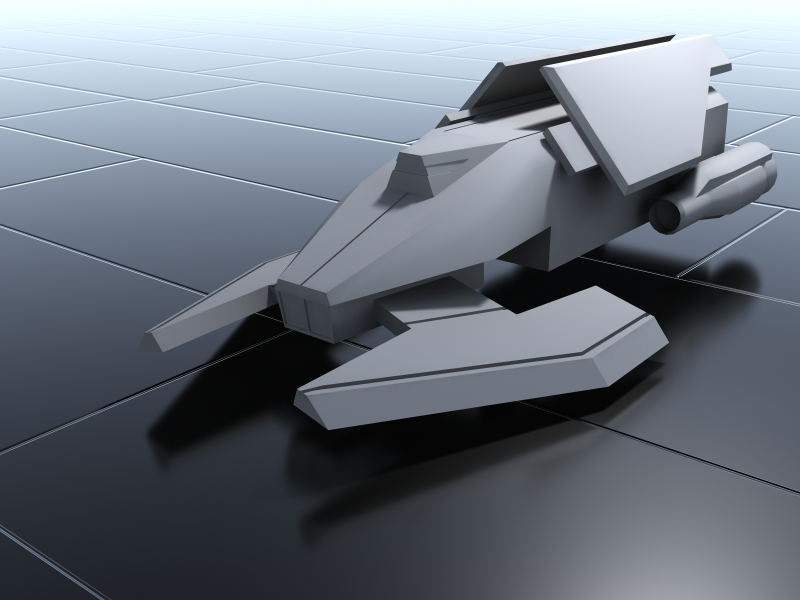 Here is another one of IG-64's models, and if I may say so; This is definately the cutest model we have created yet, but it is actually going to be an "enemy" one of the creatures roaming the Dantooine plains - Are you sure you could kill this? 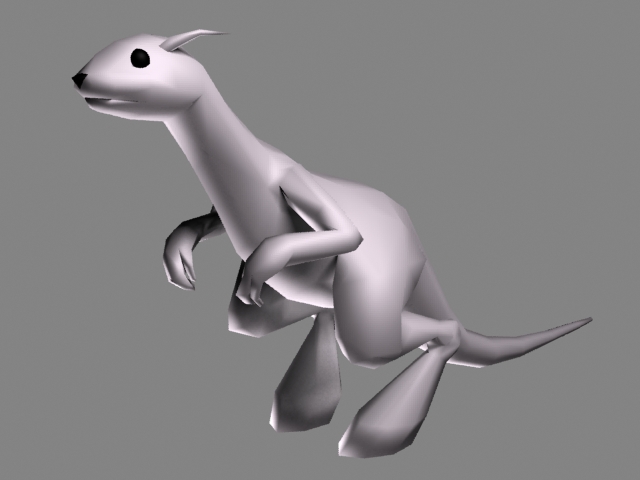 We have quite a goddamn treat for you today guys! IG-64 finished the modeling/texturing of none other than the GREATER KRAYT DRAGON! (Roarrrrrr) And i'm sure you guys will love it just as much as we already do! If all goes well, this will be one of the strongest creatures you will fight In-game. 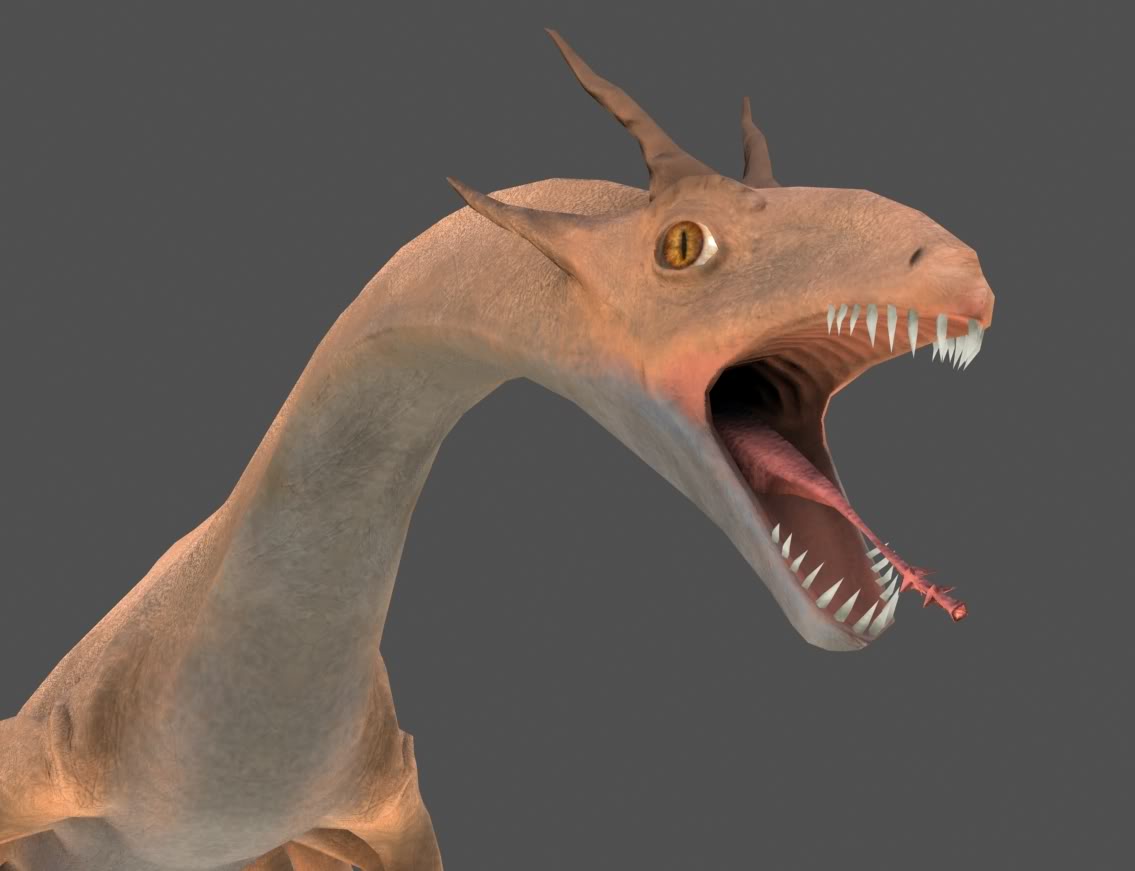 Droid 8d8 modelled by Karpman is still torturing droids left and right at Jabba's Palace. Keep your computer closed! - This is a part of one of the all-new maps we got ready. 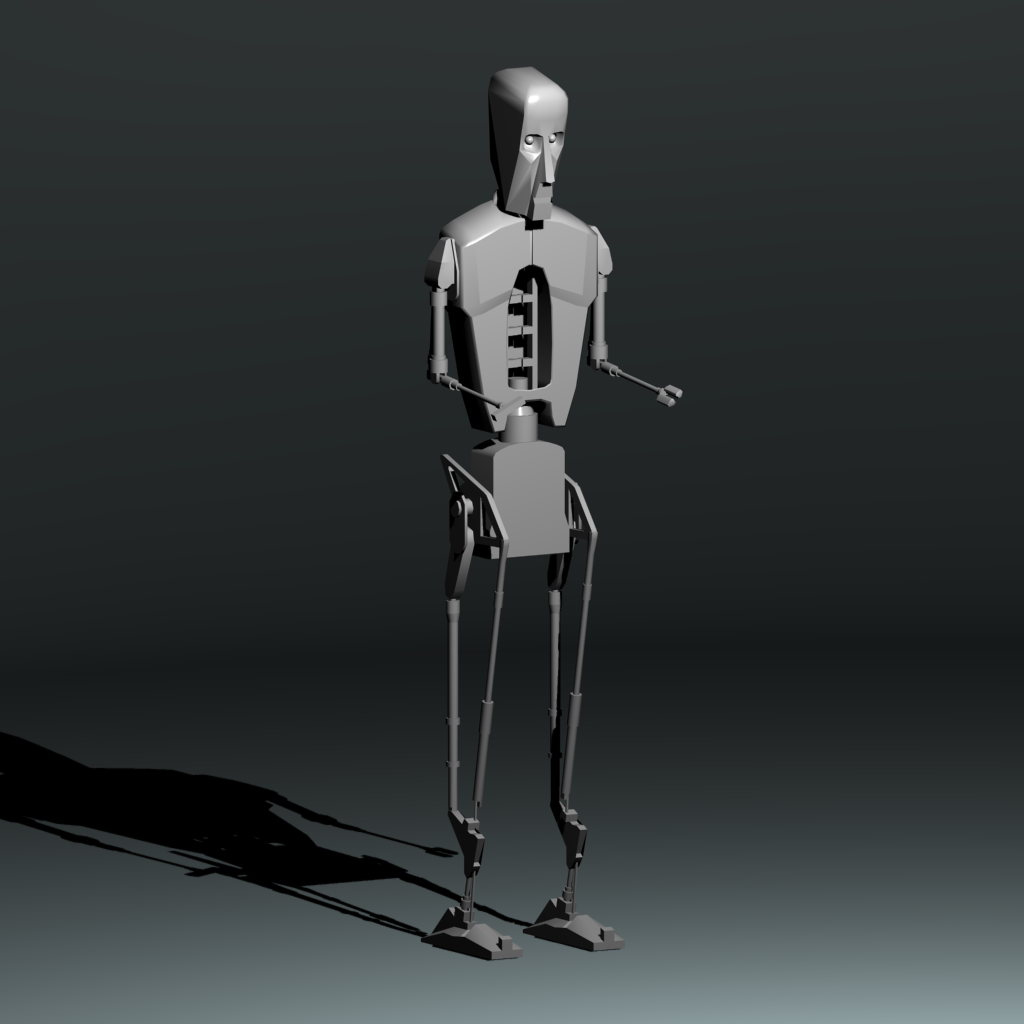 We also have a few weapons to show off. The Caelum Sereno saber was the winner of our "Create your own saber" Contest modeled and skinned by Karpman. The weapon itself was designed by Exxxed. 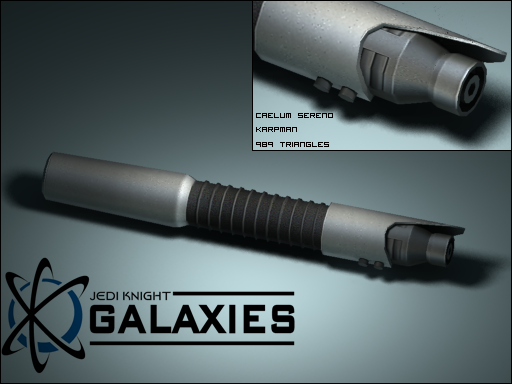 The custom vibro-ax was designed and modeled by IG-64 and skinned by Karpman.

Here's something i bet you have all been waiting for! The mapping that has been done since we last showed off any of that, is extremely extensive, and very detailed! - We won't show you anything but a few screenshots of the maps, due to the fact that we want you to have something to explore and admire, once you get to see it for real.

These first one, is mace by SJC, also known as Sith-J-Cully, showing off his all new Tatooine map; Jabba's Palace! (Where-in you will find 8d8!) 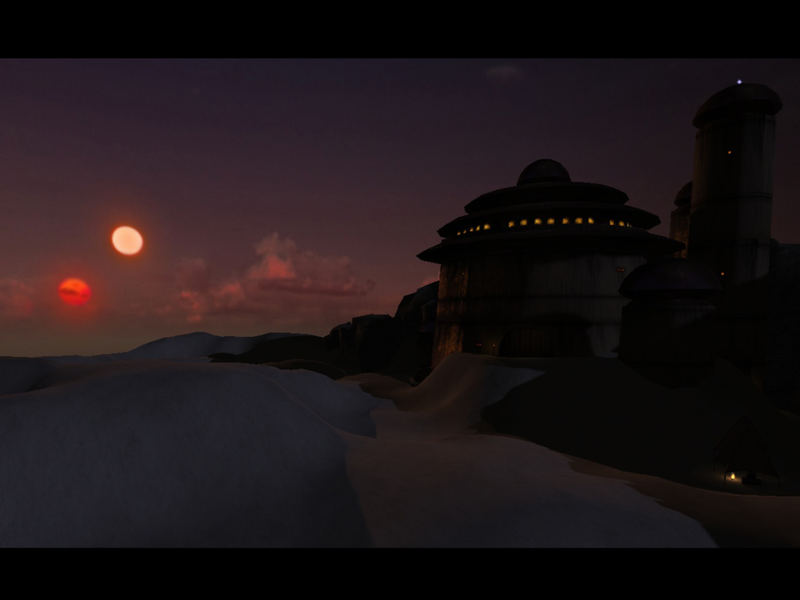 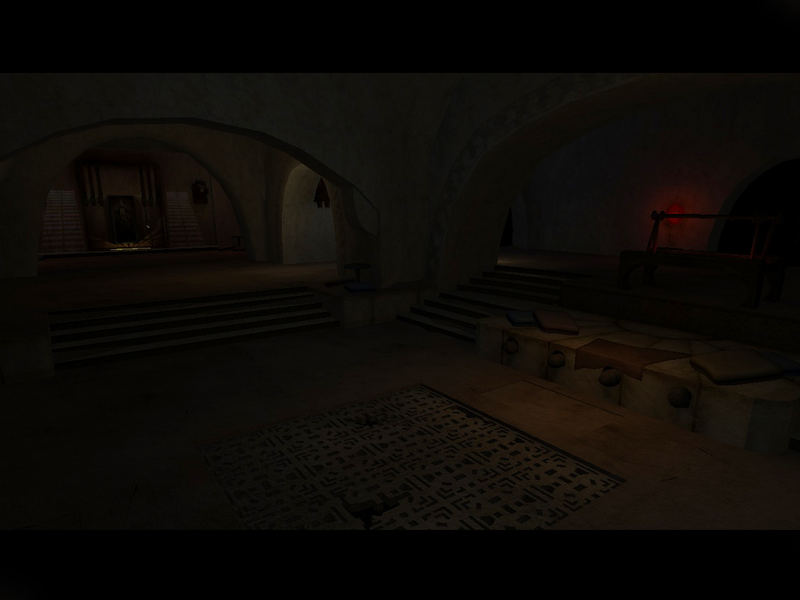 Secondly, we have the work of MaceCrusherMadunusus who also has been working on a Tatooine based map (among others) But no details apart from that, shall be given about what this map is! - Feel free to guess! 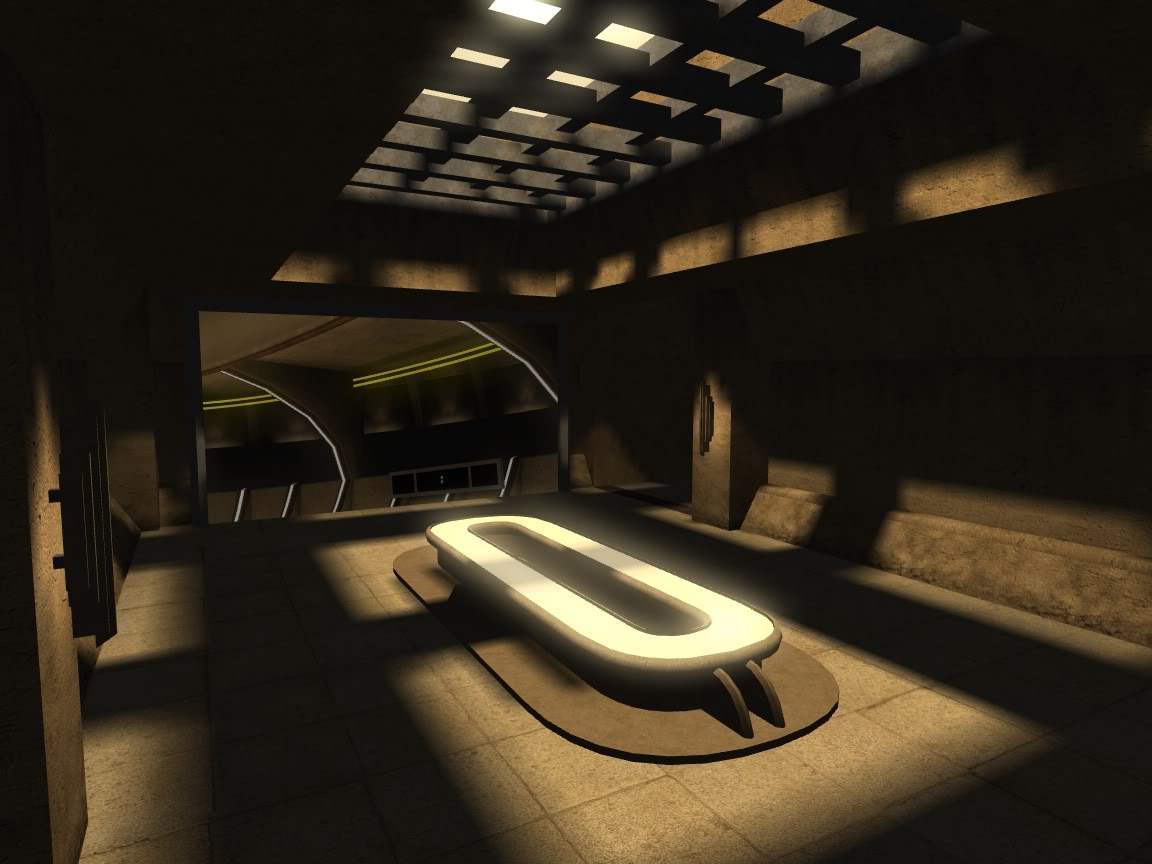 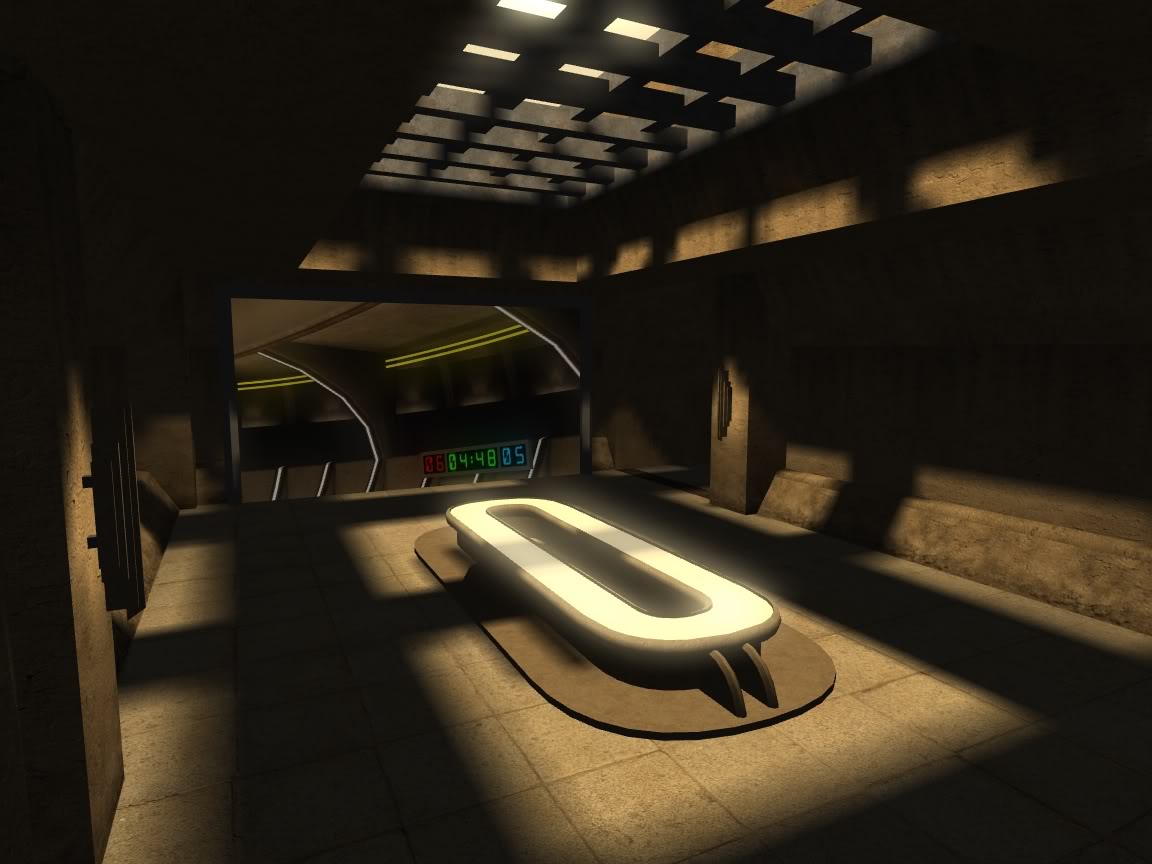 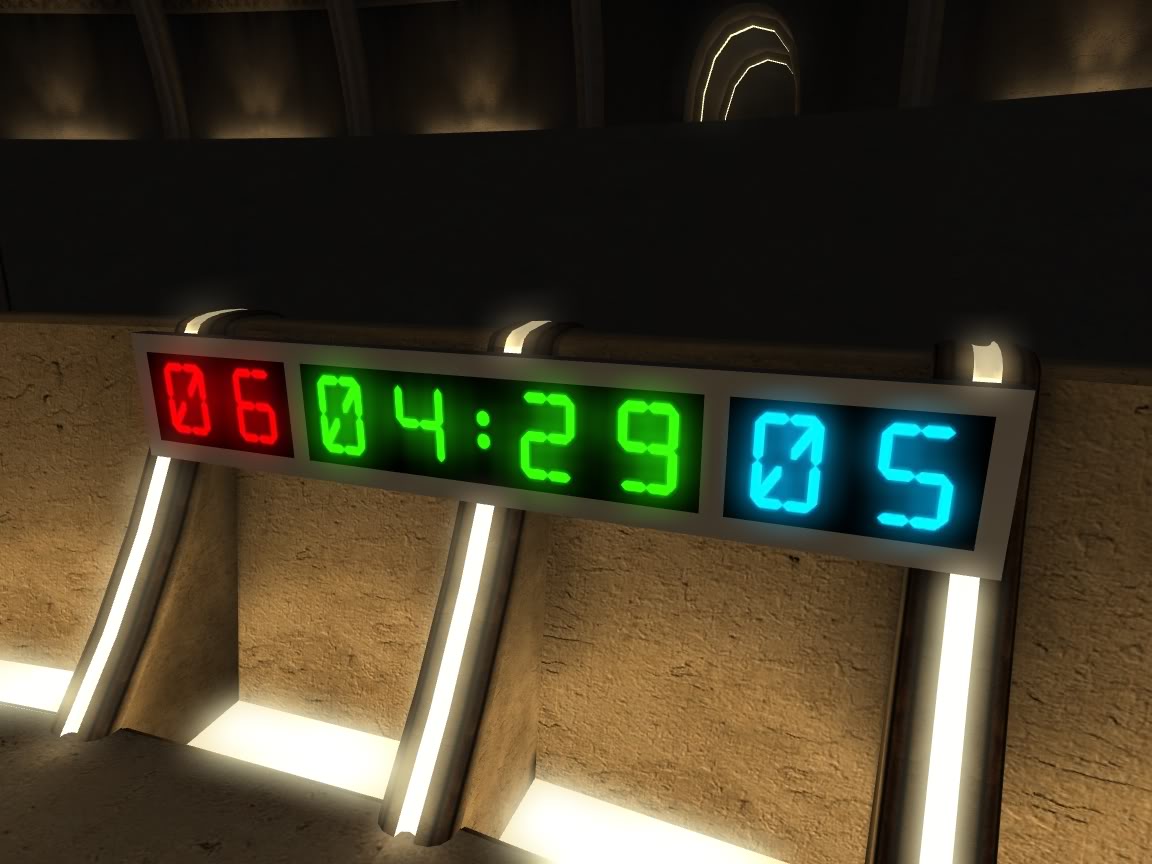 Yes, that is a working countdown, right there! Coded by BobaFett!

Ok, it's time to show you the thing i have been most anxious to show, for the last 3 months! - This has been in the making for a long time! BobaFett has been busy coding, i've been busy writing .. And at last it has been recorded and is ready for your viewing pleasure!

A little bit about what you're seeing here: This is our first *working* quest! It features individually evolving story (Each player does the quest at his own pace, the quest evolves individually) It features the working conversation system, with several different choices as well. Although this is a working quest, it is a testing quest, and It has been made with evolution in mind, meaning it's rather simple. This is the first part only!

Last, but not least, i need to mention: THIS IS ALL IN-GAME! (Apart from, obviously, the logo part) - So all you see here, is working, on our server, already.


That was all that we had to show, from these last months of work .. I hope it has been a pleasure viewing, and that you can forgive the long time that we have been quiet about our progress. - We also hope you enjoy the looks and features of this new website, and that you will keep supporting and enjoying the work of Jedi Knight Galaxies!

Damn. That's some serious engine enhancements you got going on there. Glad that Jedi Knight modding is still alive. Looking forward to this!

Its really cool and welcome back, but there is one thing which I dont like much. And it is your Krayt Dragon. Because yours is totally different from the original, which is more like a GIANT lizard with 4 legs and big head. Sorry for this.

But I like this mod very well, because finally someone is making a quality rpg multiplayer where you got a full free movement except a mmo like WoW, so keep it up :D

You are sure you're not talking about the "Krayt" dragon? This is the "Greater Krayt" dragon Starwars.wikia.com <-- That is the Greater Krayt Dragon, and although our version has got a bunch of differing things about it, it's still a pretty clear reference =)

Yeah, I see, I dont know this, sorry :) And there will be also a standart Krayt Dragon?

Hi there! How big are the maps ?
It´s looking awesome, keep up your great work!

The GREATER KRAYT DRAGON! and Tatooine look absolutely fantastic. You guys are doing some terrific work.

I knew this mod couldn't be dead. This mod is too innovative/large scale-ish to die :D

This is ******* awesomeeeee :D I'm so happy, to see The Revoluion of JA.
I play the game since the starts.
So in the end i live with Barney Stinson's words: " Its gonna be * WAIT FOR IT* LEGENDARY! Thank u guys

hmmm the working countdown is interesting i cannot understand it :S how much and what? :D

That will all become clear in due time :P