Regarding the recent events, namely the furor around the announcement of the “Paid Mod”-feature, we would like to take this opportunity to express our thanks to all those who, since the early stages of development, supported is by donating. Even though Enderal is realized on an entirely non-commercial basis, there are still costs we have to cover, such as server maintenance. Whenever there’s a plus, we invest it in ways that benefit Enderal – for example, by means of new tools and software. 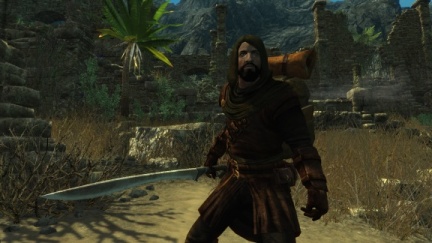 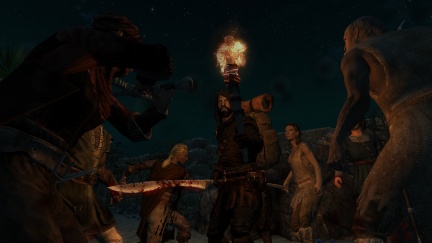 Here you can see the new Leather armor and a Kilean Saber. Both models were created in 3DS Max and textured with Quixel.

We’ve also been contacted by some of you who wanted to know if there are any other ways to donate except PayPal. For those of you wishing to express their support, new options to donate will soon be implemented.

Here’s another piece of good news:

The Butcher of Ark, Chapter 7: All the dead souls

Last but not least we want to direct your attention to the Kickstarter Campaign of our friends from Fairytale Distillery with their game called “Das Tal”. We think it’s a cool project and deserves to be backed – just take a look for yourself.

That being said, enjoy the upcoming summer!

You should definitely try to have Enderal featured in E3's PC Gaming show. It's a really deserved honor. Think about it ;)

Your work sets a fantastic standard for high end mod teams. Thank you and your team for the work and time they have put into such an impressive project. Looking great!

This video showcases the intense PvP of Das Tal


I’m afraid that gameplay footage does not do this game
justice. To the casual observer the gameplay is skittish and extremely
fast-paced and, in a word, overwhelming. There is so much happening in every
frame that there’s no way to understand what’s going on and the video gets
tuned out and is unappreciated for the sheer amount of heart-pounding action
that the game entails. At least, that’s how I felt when I watched DT vids. Some
crucial aspects of the game that gets lost in the video are the amount of battlefield
awareness that is required at every moment and the critical precision of
aiming.


A couple helpful tips when watching: try to follow my cursor
(you’ll be able to see where my focus lies and what I’m doing to help the
fight) and the big white circle that follows me is an AoE heal (I think
technically it’s an AoE HoT.. or a HOT AOE)


I'm excited for this new game on the horizon: full loot PvP
(you keep what you kill), skill-based combat (aiming is critical, friendly fire
is off, no "Tab-Targetting"), and changing worlds (At some point the
game is "Over," the world resets and different rulesets can be
employed).