Not long to go now! In the meantime, 4.5's Playlist Generator has been released along with an overview of the mod's new audio features.

We're currently testing a pretty promising release candidate... In the meantime, here are details of some of the sound-related changes coming in version 4.5.

Major sound changes of interest to all users:

Speaking of which, a new Playlist Editor has also been created for 4.5 (by AdamR). In addition to supporting the above formats, it can check for missing files, import playlist files from other programs, etc. Try it out right now if you'd like, and prepare a playlist in advance of the release: 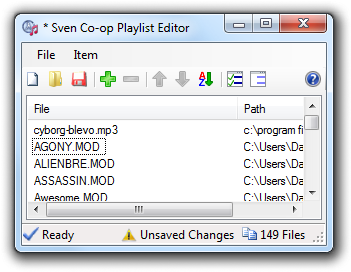 Just place PlaylistEditor.exe in your \SvenCoop\ folder before loading it. To use your existing SC playlist (mp3.txt), rename it to playlist.txt or use the program's 'File > Import' option to import it. Report any issues in this thread.

(but which will allow for more aurally appealing maps in future)

Some of the recently completed features missed from the last news post were posted on our Steam Community Group a few days ago, by the way, including such things as "Fixed Sniper Rifle Autozoom". While you're waiting, why not sign up for timely updates? Also, have I mentioned The Legend of Princess?

Damn, still can't wait. Thank god the sound related crashes were fixed, they were my most annoying problem in 4.07

Again- YAY! This is going to be nice.

so what about Sven co-op source? what happened to that?

seriously, sven for HL is fun and all but its pretty dang out dated... my PC can't even run HL1 anymore...

The resolution of my monitor is larger than the game can support...

Nice work with the playlist editor. I'm sure looking forward to release.